It is about a 43-year-old patient with no past medical history who consulted for dyspeptic disorders and vomiting. The clinical examination was without abnormalities. Esophagogastroduodenoscopy revealed innumerable sessile polyps in the cardia, fundus, and body of the stomach. The gastric antrum was free of polyps. Biopsies from the gastric body and antrum were negative for H. pylori infection. A colonoscopy was performed showing the appearance of diffuse recto-colonic polyposis. The diagnosis of Polyposis Adenomatous Familial (PAF) was retained and a genetic investigation was initiated within the family. The patient was operated on and a total prophylactic Colo proctectomy was performed. The postoperative follow-up was simple. The anatomopathological study showed an appearance of recto colic PAF without signs of degeneration. Periodic monitoring of gastric lesions was planned. But the vomiting became uncontrollable and the laboratory tests showed electrolyte disturbances which were difficult to balance (compensate). Surgery was decided and a total gastrectomy was performed (Figure 1). Pathological examination of the operative specimen was in favor of gastric glandulocystic polyposis without signs of dysplasia or degeneration. PAFassociated fundic gland polyps are reported to occur in 20% to 84% of patients. Histopathologically, they are characterized by cystically dilated and irregularly budded fundic glands in a background of otherwise normal gastric mucosa. There is a clear role for surveillance of FGPs in patients with an inherited polyposis syndrome due to the increased risk of dysplasia and cancer. In our case, surgery was necessary vu the impact of vomiting on the patient’s quality of life and on the electrolyte balance [1,2]. 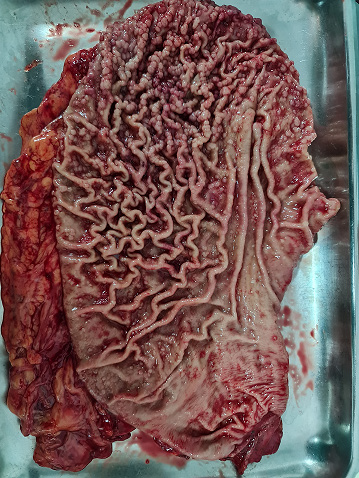