Carbon-based solid supports (buckytube) have been widely utilized in the past due to their favorable pore size distribution, improve active metal crystallite deposition, and govern substrate access to the supported metallic particle, all of which improve catalytic activity [1] also Palladium-catalyzed cross-coupling processes have long been recognized as a significant tool for forming C–C bonds, and as a result, they have piqued the interest of the materials, chemical, and industrial sectors [2,3]. Suzuki– Miyaura and Mizoroki–Heck coupling reactions are among the most common cross-coupling reactions, and they are particularly important from a catalysis standpoint. Aryl halides are coupled with organoboron in the Suzuki–Miyaura reaction, whereas aryl halides are coupled with olefins in the Mizoroki–Heck reaction [4]. These reactions are commonly catalyzed in organic solvents and aqueous media under homogenous circumstances with a range of palladium salts or palladium complexes containing various ligands [4,5].

The catalyst’s ease of separation, reclamation, and reutilization is a critical factor in the long-term development of any catalytic reaction. Pd catalysts supported by inorganic (e.g., silica, alumina, etc.) [6] and organic (e.g., polyionic liquids) [7] supports have been created and proved to be very effective catalysts for C–C coupling reactions, with the added features of catalytic reusability and ease of separation from products. In heterogeneous catalysis, nanoscale hollow tubes made of carbon atoms provide a novel type of support material. Because of their tiny size, such buckytube may be equally dispersed in solution, boosting the contact between the reactants and the catalyst. The efficiency of carbon-based support for the production of carbon-carbon bonds utilizing a pd metal catalyst will be reviewed in this paper. It offers an overview of carbonbased catalytic supports, as well as examples of many essential C–C coupling processes employing various Pd-loaded carbon-based supports.

These are sp2 hybridized carbon atom hollow cylinders. They take the shape of rolled-up graphene sheets that create tubular structures with hexagonal carbon ring walls. These nanotubes are characterised as Single-Walled Carbon Nanotubes (SWCNTs), Double-Walled Carbon Nanotubes (DWCNTs), or multi-walled carbon nanotubes based on the number of graphene cylinders (MWCNTs). SWCNTs have a single graphene cylinder with an interior diameter of 0.4–2.5 nm and a length of microns to millimetres. MWCNTs, on the other hand, feature a large number of graphene layers (about 50), with a diameter varying from 2 to 25 nm and a spacing of 0.34 nm between each sheet [8,9]. A Double- Walled Carbon Nanotube (DWCNT) formed of two concentric graphene cylinders is a unique type of MWCNT. Kroto discovered Buckminster fullerenes in the year 1985 [10]. The synthesis of these fullerenes earned these researchers the Nobel Prize in 1996, as well as promoting the study of additional carbon allotropes [11]. Using an arc-discharge process, Iijima found finite carbon structures consisting of around 2–50 tubes of graphitic sheets (MWCNTs) in 1991 [12]. Since then, carbon atoms have found a wide range of uses due to their exceptional and distinguishing physical qualities, such as mechanical stability, superior thermal conductivity, and large surface area. Following that, Iijima et al. used metal catalysts to produce SWCNTs using the same arc-discharge process in 1993 [13]. In addition to arc discharge, additional synthetic processes including as Chemical Vapour Deposition (CVD) [14], laser ablation [15], pyrolysis [16], electrolysis [17], flame synthesis [18,19], electron or ion beam irradiation [20,21], template approaches [22], and solar synthesis [23] have been employed in labs and enterprises to produce carbon nanotubes. They have seen widespread use in the fields of nanotechnology and catalysis.

Carbon, in particular, has been employed as a solid basis in heterogeneous catalysis since 1994. Many researchers in this field are interested in using different metals and metal oxides attached on the surface of these nanotubes, which frequently need functionalization, to perform covalent organic synthesis [24]. Functionalization is a beneficial route in heterogeneous catalysis for modifying the interactions between the catalyst support and active phase, thereby fine-tuning various properties of the support material such as acid–base properties, electron donor–acceptor properties, and interfacial properties. When compared to other carbon materials, carbon tube-based supports are believed to offer superior electrical, mechanical, and thermal qualities (inorganic). Surface functionalization of these materials is usually done to add extra binding sites and surface anchoring groups. Furthermore, new functionality can be added to the outside surfaces of these carriers. Chemical modification of nanotubes is typically beneficial for catalytic applications since it increases the deposition of metal nanoparticles and other species.

Buckytubes can be functionalized covalently, but the most frequent method is oxidative functionalization [25]. Surface oxidation is the creation of oxygen-containing functional groups on the surfaces of Carbon Nanotubes (CNTs), such as ketones, phenols, lactones, carboxyls, ethers, and acid anhydrides, among others. These are often used as anchoring sites for further functionalization and the insertion of various active sites for heterogeneous catalysis. CNTs can be functionalized using gas phase reactions, wet chemical techniques, or photo-oxidation using ozone [26], carbon dioxide [27], hydrogen peroxide [28], oxygen plasma [29], or water [30], among other oxidizing processes. The oxidative modification of CNTs in the liquid phase in hot concentrated nitric/sulphuric acid has been widely used, including a number of purification steps like as filtering, washing, and drying [31]. A gas phase approach has recently been disclosed, which provides an effective technique of introducing oxygen species on the CNT side walls [32].

Peng and Liu investigated the impact of peroxide oxidative functionalization of MWCNTs in the absence of a metal catalyst under neutral circumstances [28]. Several functional groups such as –OH, –COOH, and –CO were found on the surface of the nanotubes after 4 days of oxidation in their study. Following that, the carboxylic groups formed at the open ends were modified by the addition of amide and amine moieties followed by reduction to yield amine functionalized CNTs. Furthermore, nitric acid purification of commercial SWCNTs resulted in a metal-free graphene wall ended by a carboxyl group. In the Suzuki–Miyaura and Mizoroki–Heck coupling processes, pure Pd/SWCNTs outperformed Pd/C [33]. Prato et al. previously described 1,3-dipolar cycloaddition of SWCNTs in DMF with excess aldehyde and glycine [34]. This approach results in a fullerene-SWCNT containing open-end oxygenated functional groups such quinones, esters, carboxylic acids, and anhydrides. Liu et al. described a method for activating fullerene-CNTs (f-CNTs) by first treating them with thionyl chloride [35]. Chegui et al. reported surface chemical modification of Carbon Nanotubes (CNTs) by hydrolysis of poly(glycidyl methacrylate), PGMA, to obtain glycerol moieties via atom transfer radical polymerization [36]. A 1,3-cycloaddition procedure was used to generate carboxylated modified polymer CNTs (CNTsPCOOH) from the resultant CNT-POH hybrid [37]. For the synthesis of 4-bromobenzene and phenylboronic acid with Na2CO3 as the base, the catalyst produced following in situ loading of Pd nanoparticles (Pd/CNT–PCOOH) displayed greater catalytic activity and recyclability. Zhang et al. also functionalized MWCNTs by oxidising them with nitric acid and then ultrasonically modifying them with 3-aminopropyltriethoxysilane (APTS) in toluene [38].

A simple synthesis of MWCNTs using halogens (Cl, Br, and I) at high temperature and pressure has been described [39]. Chlorination and bromination of carbon nanotubes have been shown to improve their mechanical and electrical conductivity, but it prohibits them from being used in substitution operations [40]. Fluorine functionalization by direct fluorination with HF may be accomplished by prebaking the CNTs in a vacuum at 1100°C for several hours while keeping the reaction temperature between 150°C and 600°C in the presence of F2 and He gases [41]. However, due to the hazard of fluorine gas, research has focused on chlorination and bromination of MWCNTs, which may be accomplished by electrochemical processes [42]. Hanelt et al. described chemical bromination of CNTs using nucleophiles and radicals (dibenzoyl peroxides) or Lewis acids such as AlBr3 and TiBr4 [43]. As a result of the physical damage generated by the reaction, bromine can be evaporated on CNT surface flaws as it intercalates into the matrix and increases the porosity and surface area of the CNTs. Over a 7-day timeframe, brominated DWCNTs were produced using bromine vapour at room temperature. A modified Hunsdiecker process may likewise be used to bromine and iodinate CNTs [44]. Sulphonation of carbon nanotubes entails treating them with concentrated H2SO4 to produce sulphonated CNTs by microwave [45], indirect [46], or hydrothermal chemical alteration [47]. Because the –SO3H groups introduced can operate as proton carriers, sulphonated CNTs can substitute dangerous and corrosive liquid acids in some industrial acid-catalyzed operations [48]. Wang et al. discovered the sulphonation of CNTs by the interaction of MWCNTs and H2SO4, resulting in substantial deposits of sulphonic acid functional groups at high temperatures and a very acidic hydrophilic material [49].

CNTs formed as a consequence of this process can be used as catalyst supports and solid acid catalysts. The sulphonation reaction begins with mixing H2SO4 with MWCNTs and (NH4)2S2O8, followed by the addition of substituted 4-aminobenzenesulphonic acid and 2,2-azobisisobutyronitrile for further 6 hours at 80°C. Another method for improving MWCNT dispersibility in water is to combine MWCNTs with 4-styrenesulphonate at room temperature, followed by washing with dimethylformamide and drying overnight in a vacuum at 70°C [50]. Alternatively, CNTs have been sulphonated by sonication of the tubes followed by continual heating at 80°C with conc. HNO3 and HCl to add –COOH groups to the CNT surfaces [51].

Catalytic reaction significantly relies on the usage of transition metals, such as Pd metal, since their catalytic characteristics may be increased when Nanostructures are used as support materials [52]. Pd supported on Nanotubes has a high surface area to volume ratio, low porosity, and excellent electrical and thermal characteristics in general [53]. As-prepared Pd supported on CNTs and activated carbons has been actively employed in oxidation processes such as benzyl alcohol reduction. It is also worth noting that as manufactured Pd-NPs–MWCNTs were discovered to have a 3-dimensional network structure with good toxin resistance [54] (Figure 1). The fusible bond between metallic NPs and carbon nanotubes is thought to affect their use in catalysis [55]. It has been reported that palladium nanoparticles (Pd-NPs) supported on N-doped Carbon Nanotubes (CNTs) exhibit excellent electrochemical hydrazine oxidation. Pd-NPs are oxidized off the surface of a typical electrode at the suitable pH range during the procedure [56]. As a consequence of the strong contacts of the CNTs with the hydroxyl groups of the metallic oxide nanoparticles, nanoparticle oxides such as TiO2 [57] and MnO2 [58] have been deposited on functionalized CNTs via esterification processes. The CNT–oxide interface interaction is crucial for the nanomaterial’s selectivity for better heterogeneous catalytic capabilities. The hybrid material developed (MWCNTsbimetallic Pd/Rh) shown excellent catalytic activity in the anthracene hydrogenation process, which might be attributed to the arrangement of the Rh and Pd nanoclusters on the MWCNT surfaces [59]. Researchers have employed a variety of metal/metal oxide loading strategies, including electrochemical deposition, electroless deposition, noble metal deposition on functionalized CNTs, and physicochemical approaches. These approaches allow for varying degrees of control over the distribution and size of metal nanoparticles on CNT surfaces [60]. 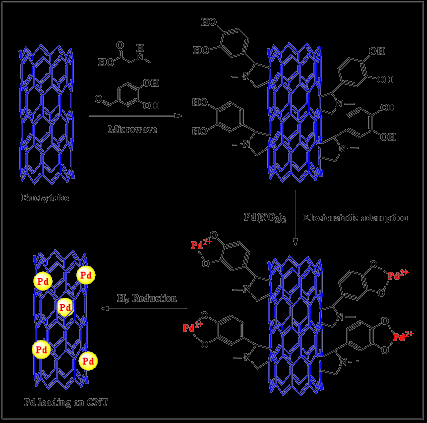 Figure 1: Loading of Buckytube with Palladium via electrostatic adsorption.

Palladium supported on carbon has been widely investigated for use as a catalyst in C–C coupling processes such as the Suzuki– Miyaura, Mizoroki–Heck, and Stille reactions, to name a few. The catalytic use of Pd/CNTs in Suzuki–Miyaura and, briefly, Mizoroki– Heck coupling reactions will be reviewed in this section of the review, and their performance will be compared to Pd/C. Suzuki– Miyaura coupling is a cross-coupling reaction between organoboron compounds and aryl halides that is catalysed by palladium. This reaction is of particular interest due to its versatility due to reagent availability, tolerance towards several functional groups, stereoand regio-selectivity, and mild reaction conditions, which make the reaction conducive and effective not only in the laboratory but also for industrial applications, particularly in pharmaceutics. The Mizoroki–Heck coupling process, as opposed to the Suzuki–Miyaura coupling reaction, relates to the coupling of olefin derivatives and aryl halides, which is one of the favoured pathways for generating carbon skeletons. This reaction is likewise catalysed by Pd, but the nature of the electronic and steric impact of the ligands used, which generally give enhanced stability, selectivity, and reactivity of the catalyst [61,62].

Carbon-based materials have several advantages as Pd supports due to the economical, safety, and availability properties of Pd/C, as well as the ease of separation from the product by simple filtration with low Pd contamination of the product, and it has been used in several large-scale industrial processes.