Objective: To verify the relationship between micronuclei lesions and health in an elderly community.

There is a lot of evidence of an association between DNA damage, age [1-3] and chronic degenerative diseases [4-7]. However, most of these studies used case-control samples submitted with a lifestyle profile and very similar health statuses [5,6,8]. One of the most neglected health conditions in the elderly population is sarcopenia, which is strongly linked to falls, fractures, hospitalization and high mortality. In this regard, several studies have shown that loss of muscle mass and sarcopenia are related to oxidative stress and inflammation, causing damage to mitochondria and nuclear DNA. Such damage triggers the release of apoptotic factors, promoting the loss and / or atrophy of muscle fibers and leading to the development of sarcopenia in elderly people [9-11]. In addition, oxidative stress causes damage to mitochondrial DNA (including damage to the electron transport chain and mitochondrial dysfunction), resulting in reduced uptake of Ca2+ by the sarcoplasmic reticulum, ultimately leading to the death of the myofibrils [12]. On the other hand, several studies have shown the important role of antioxidant machinery in controlling the generation of reactive oxygen species (ROS) in skeletal muscle atrophy and preventing rapid loss of muscle mass and function [13-15]. The micronucleus (MN) test is easily performed, has a low cost and is widely used in studies on the impact of environmental factors and genotoxicity. This test has been widely used for both in vivo [16] and in vitro [17] experiments. MN is an intracellular structure that contains chromatin that was excluded during cellular mitosis, and together with others nuclear abnormalities (NA), MN is considered an important biomarker to monitor the health of individuals or populations exposed to different biological and environmental stressors [18,19]. The Human Micronucleus consortium (HUMN) has shown advancing age to be consistently associated with a spontaneous increase of MN frequency [20]. This set of evidence suggests that the mechanisms that lead to sarcopenia (e.g., sedentary lifestyle, body composition, genetics, metabolism, and diet) are multifactorial and likely connected [3,21], but this has yet to be elucidated. Based on this context, the present study selected a sample of elderly residents in a free-living community; in this sample, DNA damage was determined by MN assay to determine if the frequency of micronuclei lesions is associated with biochemical and physiological biomarkers, anthropometric measurements, lifestyle, health status and muscle mass.

A cross-sectional observational investigation was performed with a sample of 168 elderly (> 60 years old) residents in a freeliving community in Uruguaiana city, Rio Grande do Sul State, Brazil. The study was approved by the Ethics Committee of Pontifícia Universidade Católica do Rio Grande do Sul (PUCRS, protocol nº312.127), and all subjects signed a consent form. Data were collected in the Basic Health Units (BHUs) in the city of Uruguaiana (Rio Grande do Sul state, Brazil) from July 2013 to June 2014. Subjects were assessed and social demographics, selfreported previous diseases, lifestyle variables and anthropometric measures. The anthropometric variables measured included the circumferences of the arm, thigh and calf, (measured with an inelastic tape measure) and the skinfold thickness of the brachial triceps, medial thigh and calf (measured with a Top Tec Cescorf® caliper with sensitivity of 0.1 mm, 85 mm reading range and pressure ± 10 g/mm2). Muscle mass was measured using a calibrated anthropometric balance with capacity of 150 kilograms (kg) and minimum increments of 100 g. Height was measured with a stadiometer and recorded in meters (m). For muscle mass index (MMI) evaluation was performed by Lee´s criteria [22] were used: The calculation of muscle mass (MM) was obtained by Lee’s equation:

In addition, the following formula was used for subtraction of subcutaneous fat [22]:

Leucocytes obtained from elderly blood samples by venipuncture were used to perform an MN assay. Blood samples were placed on the surface of the blade to make a smear, and the blood was spread over the surface of the blade. After 24 hours, the slides were fixed in 96% ethanol for 30 min. The slides were stained with Panoptic dye, washed in water and allowed to dry. After drying, the cells analyzed were considered as micronuclei if their sizes did not exceed 1/3 of the size of the nuclei in the main core and if they were clearly separated with discernible edges and the same color and refringence as the core [23].

Part of the blood collected was packaged in tubes without anticoagulant (Vacutainer - Becton, Dickinson and Company - New Jersey - USA). Markers of hepatic function were evaluated using an A25 Biosystems automatic analyzer (AS Biosystems, Barcelona, Spain), including aspartate transaminase (AST) and alanine transaminase (ALT) and for renal function, urea and creatinine, and total serum protein. All assays were performed in triplicate. 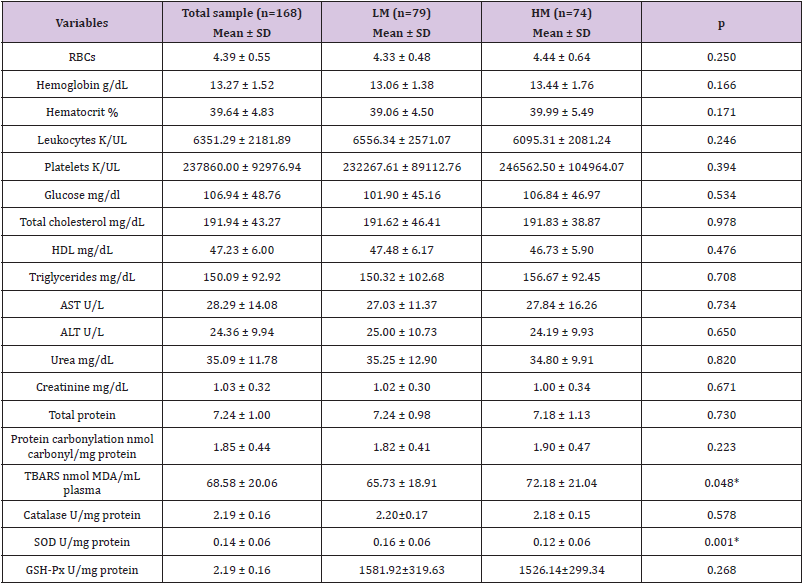 Table 2: Lifestyle and disease frequency in the total sample and in the LM and HM groups in a free-living elderly community (Uruguaiana-RS, Brazil).

Figure 1: Observation of the presence of micronuclei in the cells.

Only smoking habit and low muscle mass, as determined by Lee’s equation, were significantly associated with higher micronucleus frequency (Figure 2). The Poisson regression analysis showed an association between higher micronucleus frequency and male smokers. However, the logistic regression showed that the association between low muscle mass and higher micronucleus frequency was independent of age and smoking habit. The odds ratio for low muscle mass presenting a higher frequency of micronucleus was calculated to be 2.10 (CI 95% = 1.05 to 4.24; p=0.037). From these results, a complementary analysis was performed to evaluate whether other oxidative metabolism variables investigated here could be associated with sarcopenia Table 3. Compared to other subjects, sarcopenic subjects presented higher levels of TBARS and protein carbonylation and lower levels of SOD and GPX enzymes, confirming the association between sarcopenia and oxidative metabolism imbalance Table 3.

Table 3: Comparison of oxidative metabolism variables in elderly with and without low muscle mass determined by Lee equation.

In the present investigation, we tested the possible association between the frequencies of micronucleus and dysfunctions/ morbidities in a sample from a free-living elderly community. The results showed a significant and independent association between higher micronucleus frequency and low muscle mass, independent of age and smoking habit. To our knowledge, this is the first investigation to report the association between DNA damage and sarcopenia. A complementary analysis was performed, considering sarcopenia as a dependent variable, and the results confirmed previous investigations that found an association between morbidity and oxidative metabolism variables [9,12,27]. We also found an association between higher levels of micronuclei and male smokers. This association was expected, as smoking results in high levels of pro-oxidants and can impair mitochondrial function by decreasing the supply of oxygen, which can result in a loss of muscle mass [28]. In this study, by analyzing the smoking habit, the highest prevalence was in males, which may explain the great loss of muscle mass they displayed. Several studies have shown that an increase in micronucleus frequency may be associated with smoking [19,29,30,31]. Ishikawa and collaborators [31] analyzed both genders and found a higher prevalence of smoking and higher frequency of micronuclei in males than in females. The same pattern occurred in the present study.

This investigation described the association between sarcopenia and some oxidative stress biomarkers, including DNA damage evaluated by micronucleus assay. As is well known, aging causes a progressive deterioration of skeletal muscle mass, decreasing its strength and functionality. Several investigations suggest that sarcopenia is an important geriatric syndrome related to chronic disease, malnutrition and physical inactivity. Reactive oxygen species overproduction could that contribute to the progression of age-related sarcopenia [32] since the uncontrolled increase of these molecules is associated with age and with chronic degenerative diseases that are prevalent in the elderly population [4,8,7,33,34]. Reactive oxygen species is a byproduct of mitochondrial oxidative phosphorylation; in high levels, it causes damage to the genome of skeletal muscles due to high oxygen consumption [35]. For this reason, we compared three pro-oxidative metabolism biomarkers (protein carbonylation, lipoperoxidation and DNA damage) and three antioxidant enzymes (SOD, GPX and CAT) between the sarcopenic and control elderly subjects. The pro-oxidative biomarkers were higher in the sarcopenic subjects, independent of important biological variables such as age, sex, daily medicine intake and some chronic degenerative diseases.

High protein carbonylation levels were found in sarcopenic elderly individuals in a previous investigation performed by [36]; this study found an important association between oxidative damage to proteins and decreases in walking speed that progress to a severe walking disability among older women in a free-living community. The present study also observed a decrease in the levels of SOD and GPX antioxidant enzymes in sarcopenic subjects. These results are in accordance with previous investigations that used Sod1 knockout mice (Sod1-/-) as experimental models. These animals exhibit high oxidative stress and acceleration in loss of muscle mass. [13] showed that Sod1 (-/-) mice were around 20% smaller and had lower muscle mass than the wild-type mice. Skeletal muscle tissue from young adult Sod1 (-/-) mice also showed elevated oxidative damage to proteins, lipids and DNA. A recent investigation performed by [37] using the same experimental model showed that knockout mice presented with a reduction in hind-limb skeletal muscle mass and strength as well as alterations in neuromuscular junction morphology. Another study performed with female Balb/c mice of different ages showed a decline in GPX and CAT levels associated with sarcopenia [38]. Pansarasa and collaborators [39,40] investigated the relationship between oxidative damage and human skeletal muscle aging. They separated the volunteers into age groups—young (17-40 years), adult (41-65 years) and aged (66-91 years)—and then measured the volunteers’ antioxidant activity. They found that total SOD activity was lower in the age 66-91 group than in. the age 17-40 group, but GPX activity was constant between the groups. They concluded that oxidative damage may play a crucial role in the contraction of functional activity in human skeletal muscle with normal aging in both sexes and that men seem to be more susceptible than women to oxidative stress, which may explain the results of the present study, which found more men than women with sarcopenia. In a recent study performed by Sanchez-Flores and colleagues, they evaluated the micronucleus frequency in a group of older adults over 65, and their results showed that frail individuals had significantly higher frequencies of micronucleus in lymphocytes (19.16 ± 0.66 vs. 13.07 ± 0.78, p < .001). However, they not evaluated muscle mass. Therefore, the results of this study suggest that the balance between oxidative and antioxidant biomarkers is critical to sarcopenia and the DNA damage that occurs in other dysfunctions and chronic diseases among elderly subjects.

This is the first study to report the associations between higher frequency of micronucleus and low muscle mass and oxidative and antioxidant biomarkers, independent of age and smoking habit, in a sample from an elderly free-living community.

The present study has some limitations. First, it is a cross-sectional study, so there is a low number of subjects with sarcopenia. The study also did not carry out examinations using imaging techniques such as CT or dual-energy X-ray absorptiometry to better diagnose the low muscle mass. While the association between the high micronuclei frequency and low muscle mass was significant, complementary case-control and longitudinal investigations need to be performed to reproduce and confirm the results described here.

Conflict of Interest: The authors declare that they have no conflicts of interest.

Graziela Morgana Silva Tavares is funded by a postgraduate scholarship from the CAPES Foundation, an agency under the Ministry of Education of Brazil (process number: BEX 3113/14-0).

Objective: To verify the relationship between micronuclei lesions and health in an elderly community.