The impact of breastfeeding to cognitive development was studied in two cohorts of children aged five years, born in the years 2013 and 2014 in the polluted district Karvina and the control district České Budejovice. Information about breastfeeding was obtained from mothers´ questionnaires. The Bender Visual Motor Gestalt Test (BG test) and the Raven Colored Progressive Matrices (RCPM test) were used as psychological cognitive tests. Obtained results suggest a positive effect of breastfeeding lasting 6 months and/or longer on cognitive development in 5 years old children. This effect was more pronounced in the BG test results focusing on visual-motor skills compared to the RCPM test results measuring problem-solving skills.

Recently, we studied the impact of air pollution on cognitive development in 5 years old children during their prenatal period. The study was located to the Moravian-Silesian Region as it is considered the most polluted region in the Czech Republic by PM2.5 (particulate matter < 2.5 mm) and polycyclic aromatic hydrocarbons (PAHs) as B[a]P (benzo[a]pyrene] and control region Southern Bohemia. Two districts were selected: the more exposed district of Karvina (Northern Moravia) and the control district of Ceske Budejovice (Southern Bohemia) [1,2]. In the two cohorts of children, we did not observe any significant effect of prenatal PAH exposure on psychological cognitive tests results in the five years old children tested Blazkova, et al. [3], however, we observed the impact of oxidative damage associated with PM2.5 exposure during the prenatal period Blazkova, et al. [4]. Similar prospective cohort was followed in Krakow, Poland [5] for their cognitive development. Children were assessed at the age of 5 years by the Raven test (the Raven Colored Progressive Matrices, the RCPM test). According to the study results, prenatal exposure to PAHs higher than 17.96 ng/m3 decreased the RCPM scores [6]. Transplacental exposures to PAHs were related to a shorter head circumference, a lower birth weight, and a lower birth length which may be later related to lower cognitive functions and poorer school performance. In this cohort, Jedrychowski, et al. [7] observed the association between the cognitive achievements and breast feeding. Therefore, we also analyzed a possible relationship between the length of breastfeeding and cognitive development in the two cohorts of children mentioned, differing by a distinct level of air pollution: Karvina.PM2.5 mg/m3 37.7±14.7, B[a]P ng/m3 6.1±4.53, Ceske Budejovice PM2.5 mg/m3 17.1±4.8, B[a]P ng/ m3 1.19±1.28 [3].

The cohorts were created in the summer 2013 and winter 2014 from newborns born in the Ceske Budejovice Hospital, Department of Obstetrics and Gynaecology and Department of Neonatology, and in the Karvina Hospital, Department of Obstetrics and Gynaecology and Department of Neonatology. Newborns were selected from the normal deliveries (38th-41st week) of non-smoking mothers, who signed a written consent. Cohorts included 99 newborns (summer) and 100 newborns (winter) in Ceske Budejovice, and 71 newborns (summer) and 74 newborns (winter) in Karvina. The study was approved by the Ethics Committee of both hospitals and the Institute of Experimental Medicine CAS in Prague. Between November 2018 and November 2019, 199 mothers from Ceske Budejovice district and 143 from Karvina district who provided samples from their children in 2013 and 2014, were approached to take part in psychological testing. Undertaking psychological test was optional. Out of the total amount of 342 potential subjects, 140 refused to take part in the study, and 31 were impossible to contact. In the present study, data from 80 children from Ceske Budejovice and 67 children from Karvina were collected. The final sample therefore included 147 children. This study was approved by the Ethical Committee of the Faculty of Health and Social Science, University of South Bohemia, Ceske Budejovice from June 30, 2017.

To be able to examine the potential effect of breastfeeding on cognitive development in 5 years old children, two psychological assessment instruments were used, namely the Bender Visual Motor Gestalt test (the BG test) and the Raven Colored Progressive Matrices test (the RCPM test). From a variety of possible standardized tools, these two methods have been chosen considering the age of the tested children and the fact that measurement should have been successfully done in one session. Both methods are usually well received by children and help them adapt to the test situation. 5 years old children from our cohort were tested individually. The child psychologist who administered the psychological assessment instrument was unaware either of the fact whether the given child had been breastfed or how long did the breastfeeding took if relevant. In order to assess level of visual-motor functioning in 5 years old children, the Bender Visual Motor Gestalt test (BG test) was used. The test focuses on assessing motor functioning, visual perception, and potential developmental or neurological impairments in children and adults [8].

146 children at the age of 5 years completed the test. Each of our 5 years old children was presented with nine cards depicting different geometric shapes. The cards were presented individually and the tested children were asked to copy the design, trying to make the best reproduction possible. Test results were scored based on the organization and accuracy of the reproduction. This drawing test was well received by children and helped them considerably to get used to and feel comfortable with the test situation. Once the BG test was completed, the children were presented with a non-verbal intelligence test called Raven Colored Progressive Matrices (RCPM test) [9] that was also used in a similar study in Krakow, Poland [6]. The test has been developed and widely used for assessing reasoning and problem-solving ability in children between 5 and 11 years, including those suffering some kind of physical or mental impairment. The RCPM test consists of three sets of twelve matrix designs with increasing level of difficulty. 145 children at the age of 5 years completed the RCPM test.

Mothers engaged in the study provided us with information regarding social environment of the family, breastfeeding and eating habits, and child´s medical history. Similarly, the data regarding gestational age, birth weight, birth length, head circumference, and Apgar score were collected in order to be taken into account while analyzing psychological test results. Breast feeding details from maternal questionnaire has been in form of 3 particular questions: if the mother breastfed, how long she breastfed the baby fully and for how long the mother breastfed the child at least partially.

The length of breastfeeding has been standardized into months and split into two groups, breast feeding up to 6 months and more than 6 months. Both groups have been compared with each other using Mann Whitney U-test in total and in particular groups by regions and children gender. Other potential values from the questionnaire have been tested as potential confounders – see in Table 1.

The tested confounders are shown in Table 1. The district of Karvina differed from the district Ceske Budejovice as follows: mothers from Karvina were younger (p < 0.05), children length was shorter (p~0.001), maternal lower secondary education is more often (p < 0.05), higher education is less often (p < 0.01). The birth length and head perimeter was lower in girls vs. boys (p < 0.01) in both cohorts. No differences in the length and weight at 5 years was observed between Karvina and Ceske Budejovice as well as between boys and girls. The RCPM scores as well as the BG scores did not correlate either with respiratory or with all diseases in examined children during analyzed 5 years. The results of psychological tests affected by breastfeeding are presented in Table 2. For the RCPM test of full breastfeeding for 3 months, the correlation was positive in the RCPM test results in Karvina (p < 0.05) and in boys (p < 0.05). 6 months of full breast feeding correlated positively with higher results in the RCPM test (p < 0.05) and in Karvina (p < 0.05). Using the BG test, the full breastfeeding for 3 months correlated positively with higher test results in all study (p < 0.05), and in boys. 6 months of full breastfeeding correlated positively with better results in the BG test in all study (p < 0.001), Ceske Budejovice (p < 0.05), Karvina (p < 0.001), boys (p < 0.01) as well as girls (p < 0.05). Obtained results indicate generally more significant effect of full breastfeeding lasting 6 months and longer. It may be also speculated that the full breastfeeding may have more significant effect on future cognitive development in children living in district of Karvina which is more exposed to air-pollution Table 3. illustrates impact of maternal education levels on result of cognitive testing. Children of university graduated mothers have significantly higher level of RCPM score in all groups. For BG test score is this impact significant only for boys, but there is significantly lover score levels for mother’s lover secondary in all. 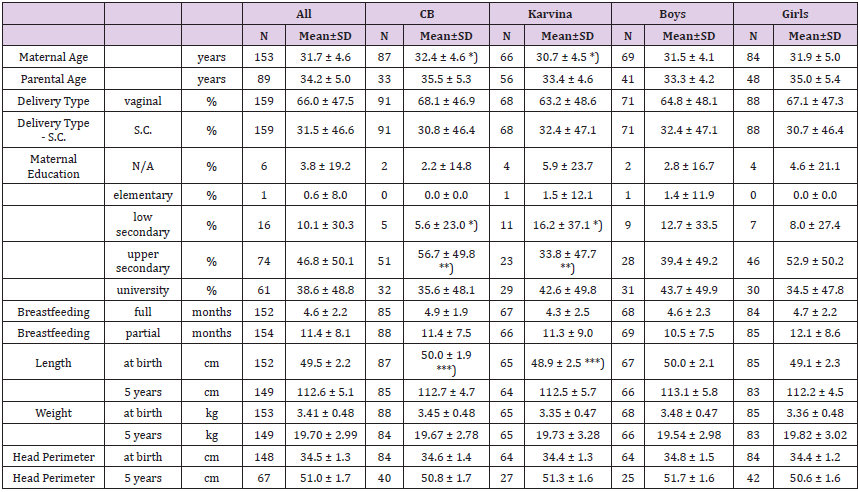 Horta, et al. [10] reviewed the relationship between breastfeeding and intelligence. This meta/analyses shows that breastfeeding is related to improved performance in intelligence test. This conclusion is also supported by our results using the BG test. Jedrychowski, et al. [7] assessed the effect of exclusive breastfeeding for birth cohort in Krakow, which was exposed to higher concentrations of PAHs in polluted air. Their study provides evidence about the beneficial effect of exclusive breast feeding for 3 months on cognitive development of children at a preschool age, the benefit for children breastfed for > 6 months was more pronounced. Therefore, they support the WHO expert recommendation on exclusive breastfeeding for six months [11]. On the other hand, another Polish mother cohort study did not show that exclusive breastfeeding for > 6 month was associated with a psychomotor development in 1 year old children [12]. Von Stumm and Plomin [13] analyzed the benefits of breastfeeding on cognitive development in British twin study through adolescence up to 16 years. They proposed that breastfeeding was slightly associated with early life intelligence but not with later cognitive growth. Also Girard, et al. [14] did not observe the effect of breastfeeding > 6 moths on cognitive development of children at age 5 years. They suggested that earlier observed benefit for breastfeeding may not be maintained once children enter the school. Pang et al. study [15] advocated that nutrients in breast milk may improve general child cognition compared to infants fed formula only. Kim and Choi [16] studied associations between the breastfeeding and cognitive function in children up to 8 years. Children breastfed > 3 months scored significantly higher on communication and problem solving. Similarly, Lenehan, et al. [17] demonstrated in children breastfed > 2 months increased IQ and nonverbal IQ at 5 years of age.

Study by Lopez, et al. [18] identified a strong association between breastfeeding duration and general Ability scores in children aged 9 / 10 years, with the greatest effect found in those breastfed for more than 12 months. Longitudinal cohort study in Australia [19] examined the relationship between duration of breastfeeding and motor development outcomes at 10, 14, and 17 years. Breastfeeding for more than 6 months was positively associated with improved motor development outcomes. Our results suggest a positive effect of breastfeeding lasting 6 months and/or longer on cognitive development in 5 years old children. This effect was more pronounced in the BG test results focusing on visual-motor skills compared to the RCPM test results measuring problem-solving skills.

We would like to thank all pediatricians, nurses and parents in both districts for the close cooperation, which made our study possible, and Mrs. Kamila Kavka for language editing.

The impact of breastfeeding to cognitive development was studied in two cohorts of children aged five years, born in the years 2013 and 2014 in the polluted district Karvina and the control district České Budejovice. Information about breastfeeding was obtained from mothers´ questionnaires. The Bender Visual Motor Gestalt Test (BG test) and the Raven Colored Progressive Matrices (RCPM test) were used as psychological cognitive tests. Obtained results suggest a positive effect of breastfeeding lasting 6 months and/or longer on cognitive development in 5 years old children. This effect was more pronounced in the BG test results focusing on visual-motor skills compared to the RCPM test results measuring problem-solving skills.