Previous study has suggested a link between type 2 diabetes mellitus (T2DM) and colorectal cancer (CRC) [1,2] but the molecular link between T2DM and CRC has not fully understood. Molecular pathological epidemiology (MPE) is a new research direction that focuses on special molecular markers of tumor initiation or progression in association with exposures of interest [3,4]. Kirsten rat sarcoma viral oncogene homolog (KRAS) and NRAS are kinase in RAS-RAF-MAPK signaling pathway. CRC with KRAS or NRAS mutation showed poor response to anti-EGFR monoclonal antibody therapy [5]. KRAS mutation occurs in about 40% of CRC and showed a high mutation rate in some subtypes of CRC including adenoma-like adenocarcinoma and mucinous carcinoma [6,7]. About 90% of KRAS mutation of CRC occurs in exon2 codon 12/13 [8]. Unlike KRAS, NRAS showed a low mutation frequency in CRC [9]. T2DM is a component of metabolic syndrome (MetS), which including a set of metabolic disorders such as central obesity, hypertension, T2DM/hyperglycemia, and dyslipidemia [10]. Previous study indicated diabetes were linked to signet-ring cell carcinoma (SRCC) and colorectal adenocarcinoma (MAC) with components (mucinous, signet-ring cell, or neuroendocrine) [11]. KRAS mutation was detected at a higher frequency in mucinous carcinoma in comparison with classic colorectal adenocarcinoma (or non-mucinous adenocarcinoma) [9]. However, the association between T2DM and mutation of KRAS (or NRAS) has not been well-established so far. In the present study, we aimed to study the association between T2DM and KRAS or NRAS mutation in CRC.

The retrospective study included 232 cases (not including 11 cases excluded according exclusion criteria) of primary CRC from January 2013 to June 2021 in Zhejiang Provincial People’s Hospital. Cases without clinical data such as diabetes status were excluded from the study (n=11). The patients were divided into subgroups of KRAS-mutation (mKRAS) and KRAS-wild-type (wKRAS), as well as NRAS-mutation (mNRAS) and NRAS-wild-type (wNRAS). The basic clinical data of the patients including gender, age, weight, height, blood pressure, fasting plasma glucose (FPG)/diabetic status, fasting plasma triglycerides (TG), and fasting plasma highdensity lipoprotein cholesterol (HDL) were collected from the electronic medical records. Factors such as cigarette smoking habit, history of family gastrointestinal cancer (FGICH) were also collected. Pathological parameters including histological subtypes and histological grade of CRC were acquired from the pathological reports.

The Ethics Committee of Zhejiang Provincial People’s Hospital reviewed and approved the study (2021KT001, KY2019012). Anonymous clinical data were used in the analysis.

T2DM was diagnosed according the following criteria:
a) Patients had documented T2DM history before diagnosis of CRC;
b) Patients did not have a T2DM history but met the T2DM criteria of American Diabetes Association (ADA) [12]: FPG ≥ 7.0 mmol/L or Hemoglobin A1C ≥ 6.5%. Medical conditions such as dextrose and corticosteroids treatment that may elevate blood glucose levels were excluded.

Continuous variable was expressed as mean ± standard deviation (SD) and analyzed by t-test. Categorized data were calculated as frequencies or percentage and analyzed by Chisquare test. If the theoretical frequency was less than five (T< 5) in any grid of a four-grid (or R´C) table, Fishers exact test was used for Chi-square test. Univariate or multivariate binary logistic regression models were used to estimate odds ratios (ORs) and 95% confidence intervals (CIs) for risks of KRAS mutation in association with T2DM and other factors (non-T2DM as reference). Two-sided value of P<0.05 was considered statistically significant. Statistical analysis was performed with SPSS software version 19.0 (IBM Corp., Armonk, NY). 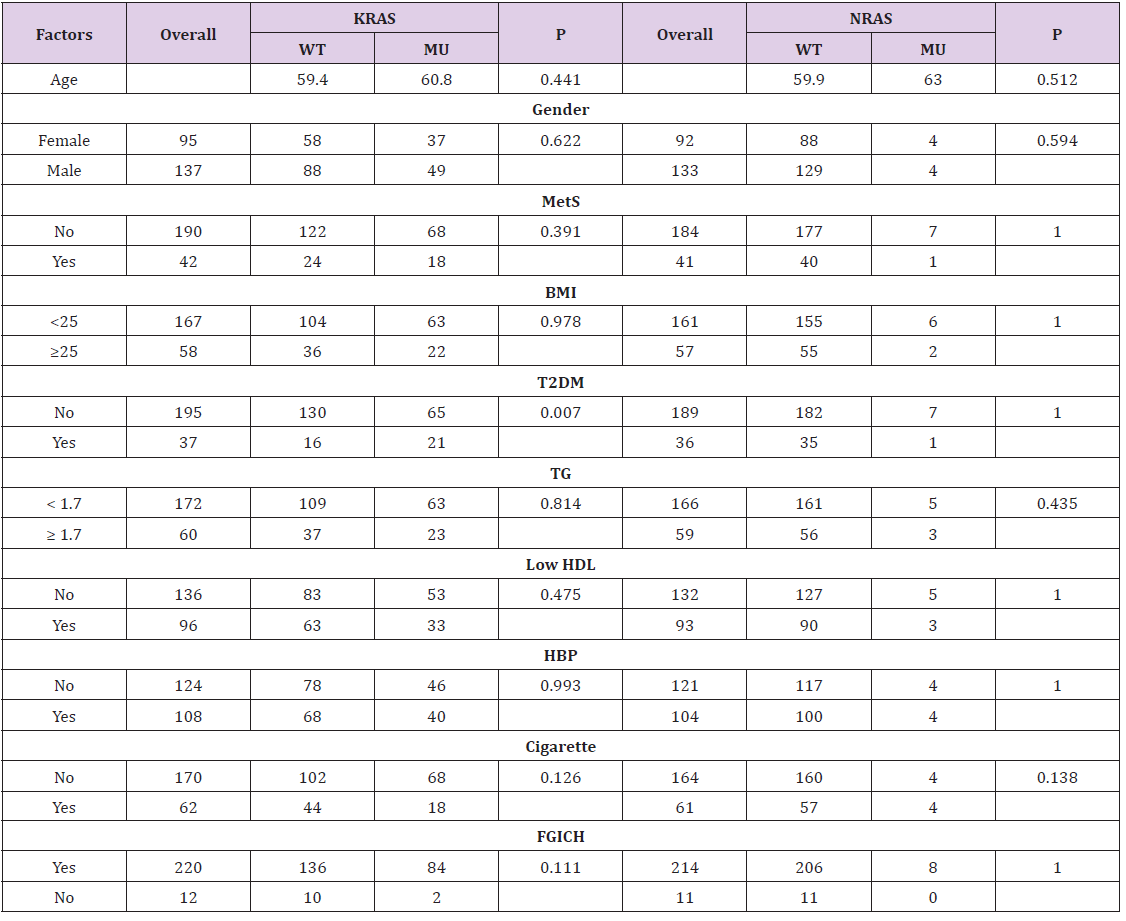 Table 1: Basic characteristic according to KRAS/NRAS status of colorectal cancer. 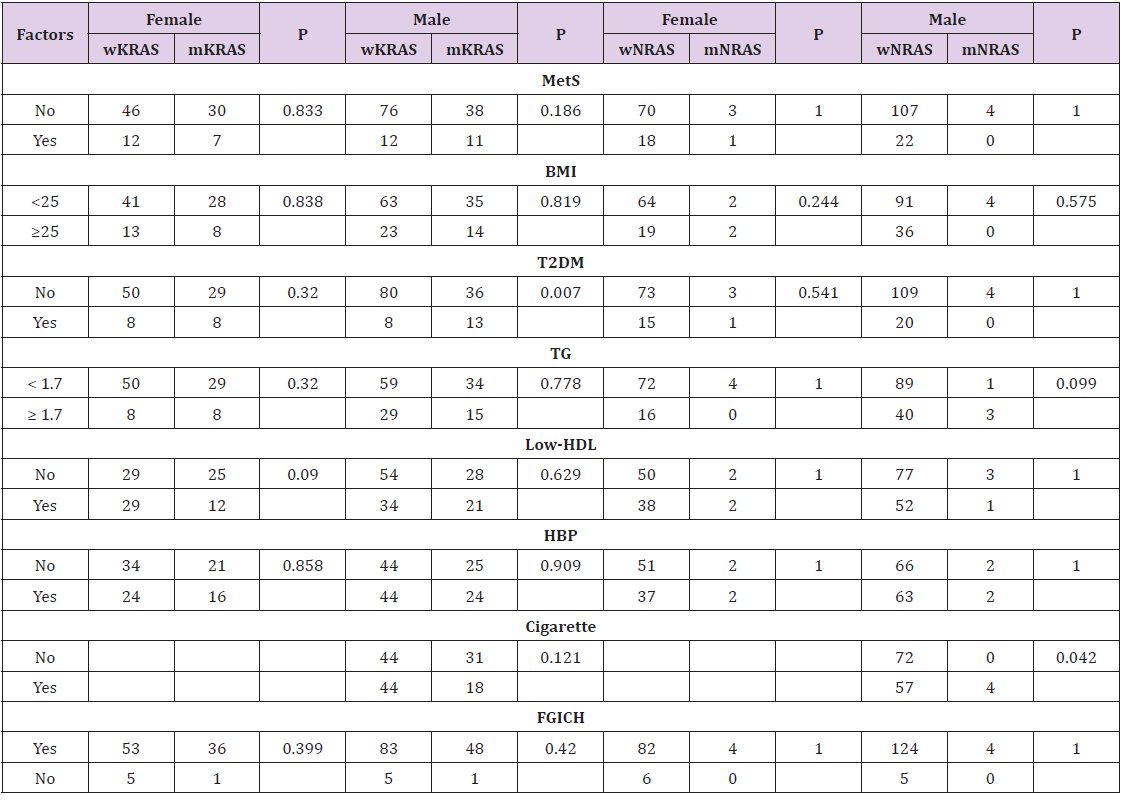 Table 2: Basic characteristic according to KRAS/NRAS status of colorectal cancer in patients of both genders.

To further determine whether there was any sex-specific difference for the association between T2DM and KRAS mutation, we examined the relationship of KRAS mutation and T2DM in CRC patients of both gender. Univariately, T2DM significantly associated with KRAS mutation in overall patients (OR=2.63, 95% CI: 1.28-5.37, P=0.008) and male patients (OR=3.61, 95% CI: 1.38-9.47, P=0.009), but not in female patients. Multivariate logistic analysis including other potential confounders such as age, high BMI ( ≥25), low HDL, high TG (≥ 1.7), cigarette smoking habit, and family gastrointestinal carcinoma history, retained the above significance (Table 3). The results further demonstrated T2DM was an independent risk factor for KRAS mutation in CRC patients, especially in male patients (Table 4). 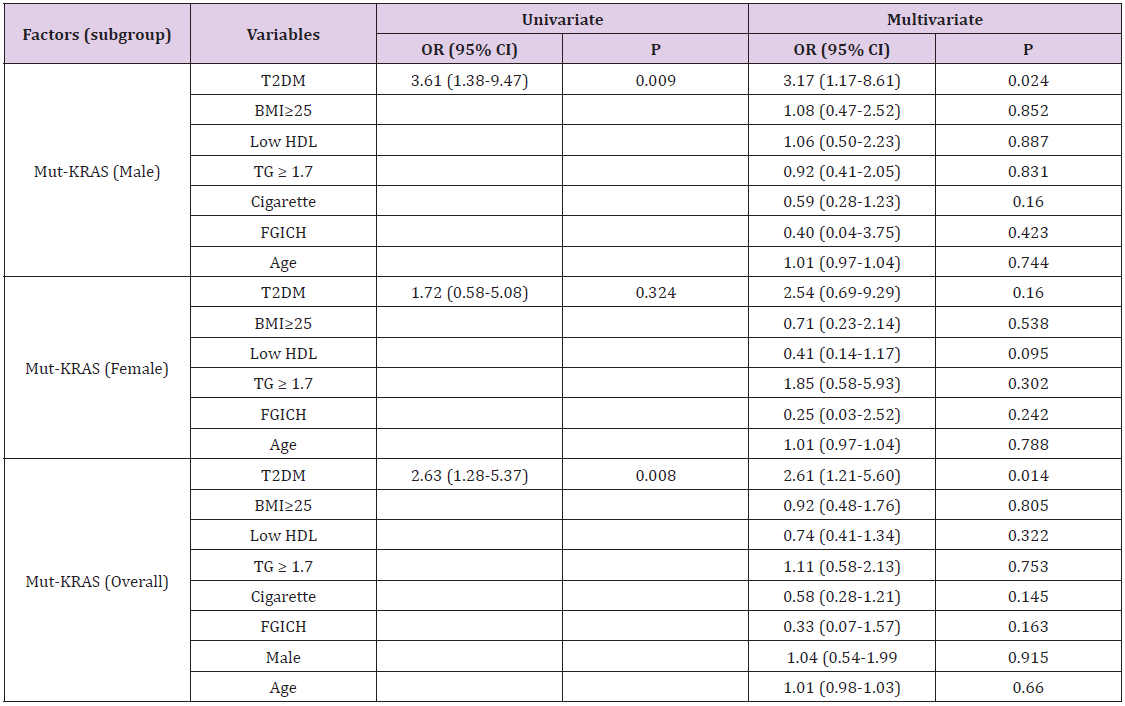 Table 3: Association between type 2 diabetes and mutation of KRAS and KRAS/NRAS of colorectal cancer in overall patient or both sex. 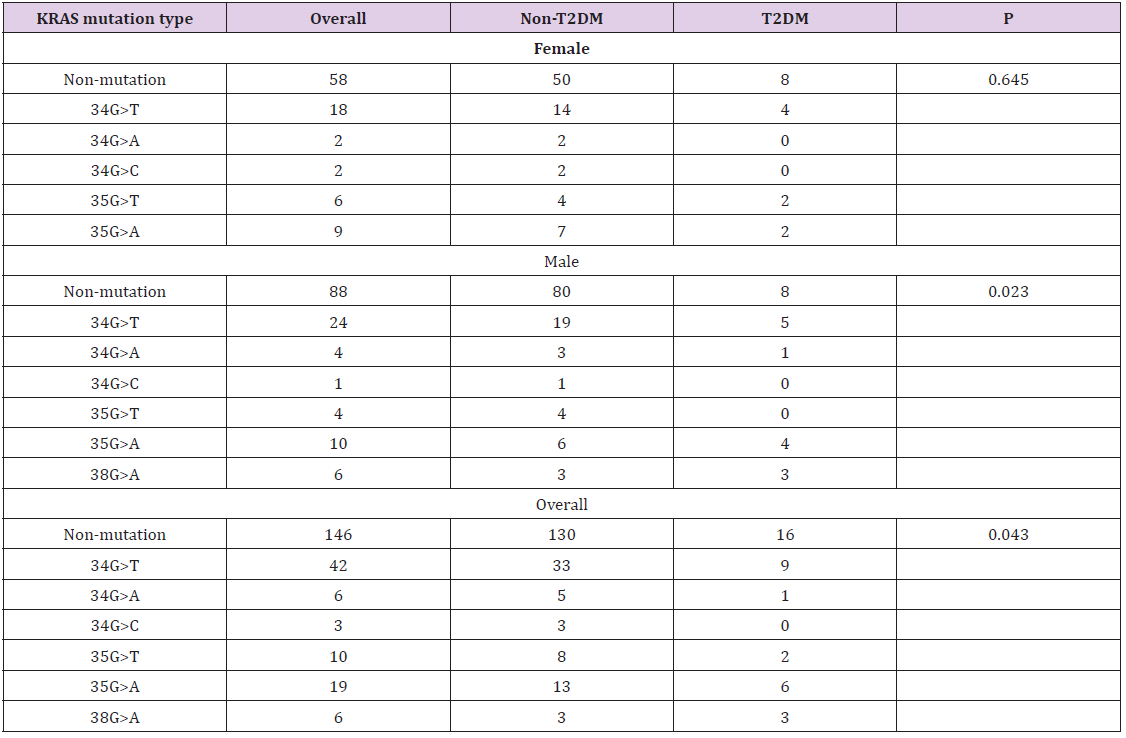 To study the association between mutation of KRAS or KRAS/ NRAS and pathological features of CRC, we examined the relationship between mutation of KRAS or KRAS/NRAS and pathological features including pathological subtypes and histological grade of CRC. As showed in Table 5, the rates of mucinous adenocarcinoma and adenocarcinoma with components (mucinous or signet-ring cell) in KRAS mutation group were 11.6% (10/86), 9.3% (8/86), which is higher than corresponding rates of KRAS wild-type group [4.1% (6/146), 4.8% (7/146), P=0.026]. Meanwhile, the rate of mucinous carcinoma in KRAS/NRAS-mutation group was significantly higher than KRAS/NRAS-wild-type group [12.8% (12/94) vs. 4.6% (6/131), P=0.026]. However, KRAS mutation was not significantly associated with histological grade in the present study (P> 0.05). The results indicated RAS mutation to be associated with mucinous histological phenotype of CRC which might lead to adverse clinical outcome.

The present results demonstrated T2DM was significantly associated with mutation of KRAS in men, but only a weaker association between T2DM and KRAS mutation in women. The reason for the gender difference of diabetic impact may partly attributed to the different levels of sex hormone or its related factors such as adiponectin and sex hormone binding globulin (SHBG) [20]. Adiponectin is a kind of hormones secreted by adipose tissue and exerts an insulin-sensitizing effect [21]. Adiponectin was considered to play a role in colorectal carcinogenesis in men [22]. Low levels of adiponectin are associated with obesity, T2DM and increased risk of KRAS-mutant CRC [23]. Previous study demonstrated adiponectin level in male is significantly lower than female [24]. Moreover, lower levels of adiponectin and SHBG were likely to be correlated with family T2DM history-associated risk of CRC in male [25]. Further study is needed to clarify the molecular mechanism for the gender impact on association among T2DM and KRAS mutation, biological behaviors of CRC.

Although the mechanism for the association between T2DM and KRAS mutation is not fully understood so far, several lines of evidence may partly contribute to the association between T2DM and KRAS mutation status of CRC. At first, high level of glucose (in T2DM condition) promotes mutagenesis in human lymphoblastoid cells [26]. Secondly, high level of glucose triggers nucleotide imbalance through O-GlcNAcylation of key enzymes and induces KRAS mutation in pancreatic cells [27]. Whether these mechanisms are involved T2DM-associated mutation of KRAS of needs further investigation. KRAS mutation was considered to be associated with aggressive pathological features and prognosis of CRC [28,29]. Oncogenic KRAS can drive invasion and metastasis in a mouse model of CRC and the TGF-beta pathway was revealed as a key mediator for mutated KRAS-driven invasiveness [30]. Our present data showed of KRAS mutation to be significantly associated with mucinous phenotype of CRC (MAC or AC with mucinous components). Recent studies suggested KRAS mutation to be associated with risk of colorectal mucinous carcinoma and gastric mucinous carcinoma [7,9,31]. Because mucinous adenocarcinoma is commonly more aggressive than classic CRC, T2DM-associated KRAS-mutation might influence progression and prognosis via promoting mucinous phenotype of CRC.

Statement of Conflict of Interest