Recently, the elderly’s quality of life has been emphasized with the prolongation of the average life span. The act of taking meals through the mouth is an important factor even in a longevity society. On the other hand, in the elderly, the incidence of oral problems has increased, and an edentulous jaw requiring a denture is a representative one. Marked atrophy of the mandible is noted in elderly persons requiring a denture; bone strength is limited. In this study, we investigated the pattern of fracture in accordance with mandibular loads with respect to the presence or absence of denture wearing in a patient with atrophy of the edentulous mandible.

We performed finite element analysis in a 71-year-old female with an edentulous mandible. Using the Digital Imaging and Communications in Medicine (DICOM) data obtained on computed tomography in this patient as the material, the edentulous mandible was extracted, and a three-dimensional model was prepared using a personal computer. Using this model, a bruise on the mentum of a denture-free or -wearing edentulous mandible was reproduced (Figure 1). For the finite element analysis/evaluation, we used software for finite element analysis, Mechanical Finder (Research Center of Computational Mechanics, Inc., Tokyo). As the material properties of the mandible, we used the material property value calculated from the CT value based on Keyak’s formula (A Poisson’s ratio of 0.4 was used). For fracture reproduction, loading/constraint conditions were established so that a mental bruise might be reproduced, assuming a status of a falling-related bruise on the mentum. Loading conditions were established at the mentum. Constraint conditions were established at the jaw-assumed condylar process/mandibular head and denture-wearing-assumed alveolar parts of the mandibular midline and body. However, when establishing the constraint conditions for the mandibular head, one node of the mandibular head was completely constrained, and the other one was constrained in directions other than the X-direction (Figure 2). 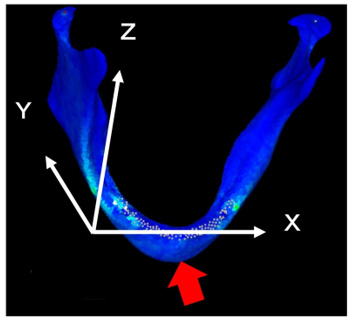 Figure 2: A 3D mandible model from an edentulous jaw patient. The x-, y-, and z-axes were established, as shown in this figure. The mentum was loaded (red arrow). 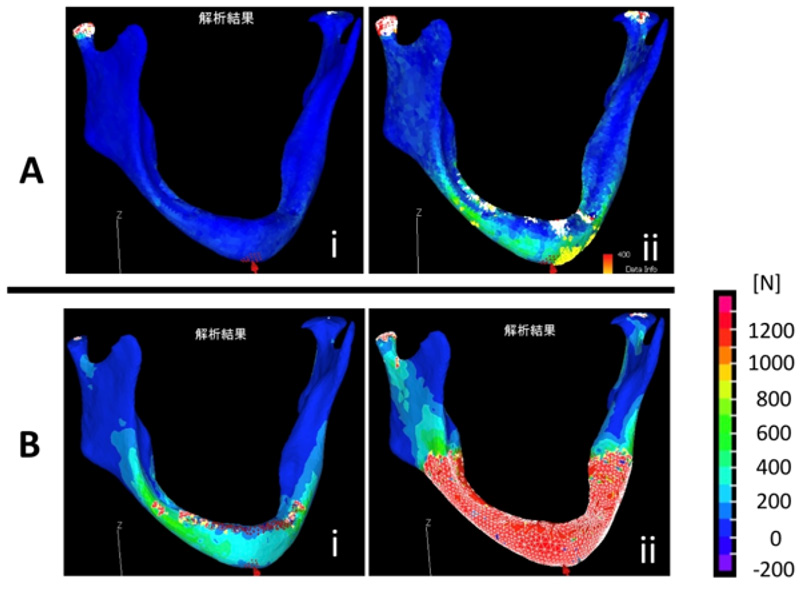 The improvement of life environments has prolonged the average life span, increasing the number of elderly persons. As a result, the incidence of aging-related diseases, such as atrophic fracture of the mandible, has increased [1]. The risk of fracture depends on the degree of atrophy of the mandible. It is high when the height of the mandible is ≤20 mm [2]. When atrophic fracture of the mandible occurs, Open Reduction and Internal Fixation (ORIF) is the gold standard treatment method. However, mandibular reconstruction with a free fibula flap is recommended in accordance with the patients [3]. Of patients with fracture of the mandible, 3% had an edentulous mandible. In these patients, various treatment methods, such as sprints, dentures, intra-bone wire fixation, and fixation with mini plates and screws, were used [4]. However, the incidence of complications after reduction in patients with an edentulous mandible is reportedly 18% [4]. In our institution, for the treatment of atrophic edentulous mandible fracture, surgical approaches or fixation methods are also selected/determined through a sufficient review, and follow-up is conducted, considering postoperative denture wearing. In any case, it is difficult for health care professionals to select or determine treatment methods in many patients with atrophic edentulous mandible fracture.

No funding was received for this article.
The authors have no conflicts of interest directly relevant to the content of this article.