In the case of ingrown toenail when the nail is short and the granulation is large, it is often difficult to raise the nail without pain and eliminate the ingrown toenail. Even in such a case, painless treatment can be easily realized by the Sogawa nail correction method. This is because we are performing remote treatment, so I would like to present the case and introduce the actual situation.

SH Wire is a nail correction wire originally invented by the author in 2011. It is a nail correction device that is bonded to the nail surface and corrects the curvature of the nail using the principle of leverage (Figure 1a). The SH wire uses leverage to raise the nail. When used on an ingrown nail, the nail edge on the ingrown side is the point of action and the opposite side is the point of force. The force point, fulcrum, and point of action when the device is actually attached are indicated (Figure 1b).

The greatest feature of this wire is that remote treatment is performed. Remote treatment is practiced in the following steps.
1) The SH wire uses the nail adhesive method. Therefore, it is possible to hang the wire diagonally on the nail (Figure 1b).
2) As a result, remote correction and painless treatment were realized.
Three-dimensional mounting is a mounting method that does not shift even if it is licked in the case of curved nails. This is omitted due to space limitations. Please refer to other papers.
3) Remote correction is a method of lifting the nail at a distance of 1 to 2mm from the part where the nail is invaginated into the skin to release the invagination. With this method, we don’t touch the painful area, so we can practice treatment that does not hurt. 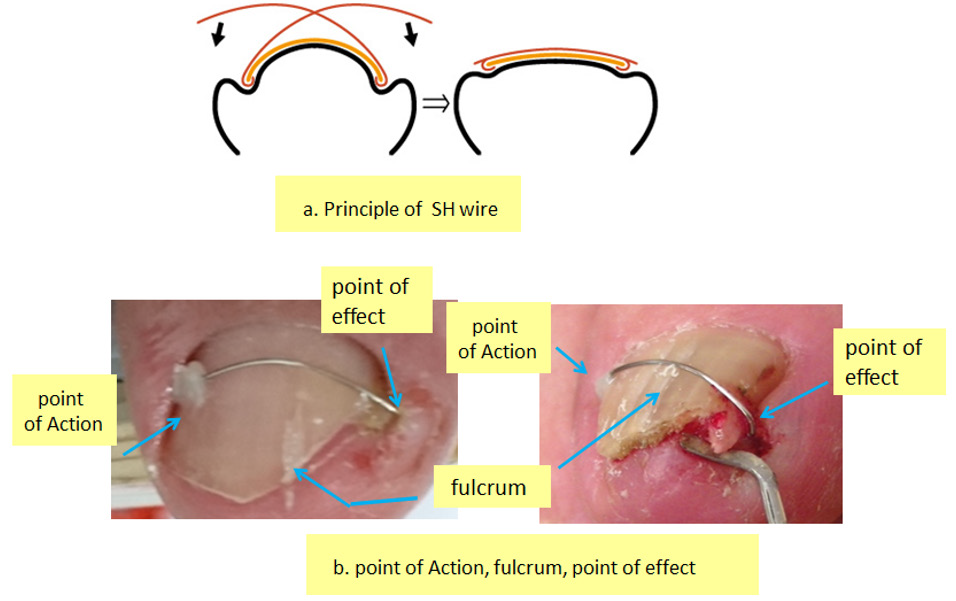 In principle, no anesthesia is required to attach the SH wire. But only one case finger block anesthesia was performed because the skin of the side nail fold covered the nail thorns and hindered nail elevation. At my clinic, 7980 ingrown toenail cases were treated with SH wire method during 10 years and 11 months from April 2011 to February 2022. 7945 cases healed and 35 did not. The cure rate was 99.5% (7945/7980). Phenol method was performed on 35 cases that did not heal, and the course was good.

• Chief Complaint: Deeply ingrown toenail.
• Medical History: Nothing to note.
• Progress: Deep ingrown toenail and granulation of the right hallux from 3 months ago (Figure 2a).
• Treatment: The pain is so strong at the first visit that the wire cannot be hung on the invaginated part. Therefore, the 1st line painless point treatment was performed (Figure 2b). Two days later the pain and swelling subsided. Therefore, we were able to hang a wire on the 2nd line, which is about 2mm closer to the recess than the 1st line. It’s called the 2nd line attack (Figure 2c). After that, it progressed smoothly and healed 32 days after the first visit (Figure 2d). 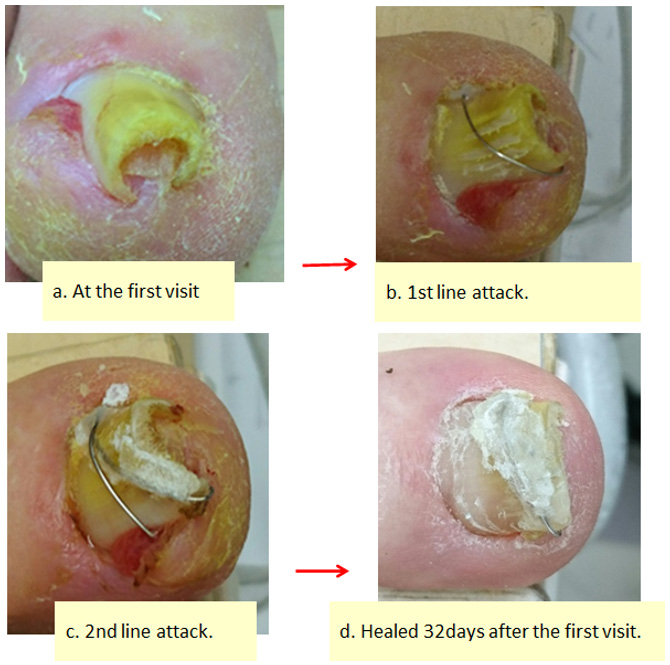 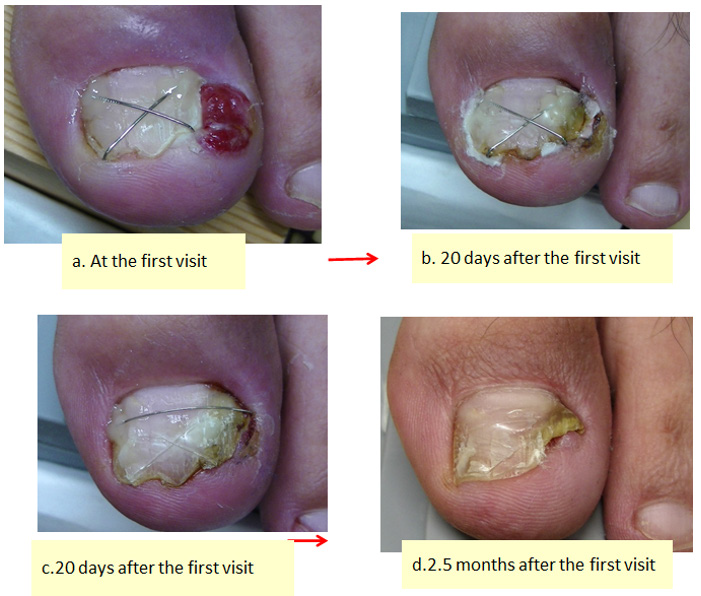 Looking at the ingrown toenail equipment in the past, in the VHO method, hooks are hooked on the nail edges on both sides [1], and in the Machi-wire method, the wire is passed through the hole made in the nail to fix the nail and the wire [2]. The SH wire has the wire glued to the nail. As far as the author knows, there is no other method of adhering a wire to the surface of the nail to treat ingrown toenail (PubMed 2000-2021). In the Sogawa nail correction method, stainless steel for springs is used instead of super elastic wire. As a result, in this method,
1) The hook can be easily adjusted according to the shape of the nail, and
2) The price is low (the price of SH wire is 1/7 or less of that of the above two types of wire).

There are 7 levels of wire thickness, which are used according to the hardness of the nail. I have never felt any difficulty with this wire due to lack of straightening power. Another feature of this method is that even small and thin nails such as the little finger of the hand can be worn easily and in a short time, just like the hallux. Various technologies are required to implement this method. In order to disseminate these technologies, we are conducting remote training using the WEB. It also supports English, and anyone in the world can participate.

In the Sogawa method, a wire is adhered to the nail to correct the curvature of the nail. As a result, remote correction became possible, and ingrown toenail painless treatment became possible. We presented the cases and introduced the actual situation.

We would like to thank the dentists Hiroshi Shirai and Akihito Shirai for their technical guidance regarding dental technology.