Chesnut Honey and his Properties in Wound Healing

Out of all types of honey, chestnut honey is exceptional due to its composition. It is made from nectar and honeydew and is therefore a real treasure trove of substances – chestnut honey contains specific amino acids, proteins, enzymes, and elements that promote wound healing. Two of the three basic mechanisms are based on physical characteristics, namely the high sugar content and perfect ratio, as well as the acidic pH. The third mechanism depends on the glucose oxidase enzyme that is added to the honey by the bee.

The tradition of wound healing with honey is more than five thousand years old (Table 1). Today, medical honey has a significant place among modern wound dressings. 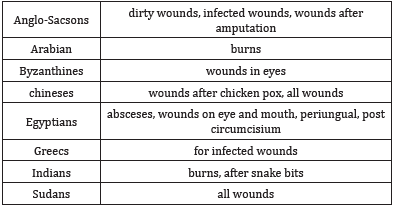 In defining therapeutic strategies for the local wound care, the TIME concept can be of great help. It means setting objectives based on the assessment of the condition of the wound in four steps [1]. The first step is to assess the predominant tissue in the wound and define strategies for removing dead tissue. Next, level of inflammation and signs of infection should be assessed [2]. The degree of inflammation is inseparably linked to the amount of exudate, so we need to determine how to create a favourable environment for wound healing. Such an environment will stimulate proliferation. The last step is the assessment of granulation and epithelialization progress. Analyses, testing, and clinical studies have shown that the physical properties, enzymes, amino acids, and elements in Vivamel™ medical chestnut honey provide mechanisms that are consistent and follow the four steps of the TIME concept [3]. The main features of medical chestnut honey are the promotion of debridement and cleansing of the wound bed, as well as exceptional anti-microbial and anti-inflammatory properties. It also prevents and destabilizes the biofilm. Reduced infection and inflammation in the wound result in the reduction of the unpleasant odour [4] that is common in chronic wounds. Honey creates a moist environment in the wound and develops mechanisms that stimulate proliferation – both collagen synthesis and keratinocyte proliferation.

Dead tissue acts as a physical barrier that prevents contractions in the wound and growth factor activity. Continuous debridement should be ensured throughout the whole wound healing process. The main mechanism of autolytic debridement is osmosis [5]. Honey as a saturated sugar solution causes osmosis and increases perfusion in the wound. This softens and dissolves the nonvital tissue without pain. The osmotic activity of honey in the wound massively attracts macrophages and lymphocytes and thus stimulates a local immune response. Stimulated proteolytic debridement is another proof of how exceptional medical chestnut honey actually is. The bee adds the Glucose oxidase enzyme from its hypopharyngeal gland to the honey. In mature honey, the enzyme is inactive and is activated when fluid is absorbed by honey [6]. It then catalyses a reaction in which hydrogen peroxide is formed. This activates proteases that break down necrotic tissue. Inflammation, oedema, and pain are reduced [7].

The anti-inflammatory action of medical chestnut honey is also based on the complex mechanism of the antimicrobial action [8]. Osmotic activity of sugars in honey dehydrates bacteria and creates a basic bacteriostatic effect. Combined with the acidic pH, it establishes an environment in the wound, in which pathogens are unable to reproduce. When honey is diluted and the mechanism conditioned by the physical properties of honey fades away [9], the enzymatic capacity of honey is activated. Glucose oxidase triggers a reaction between glucose, oxygen, and water, in which gluconic acid and hydrogen peroxide are formed. These two substances lower the pH value additionally [10]. Scientists have confirmed another remarkable property of chestnut honey – its content of kynurenic acid which has the ability to destabilize and prevent biofilm formation in the wound [11]. Kynurenic acid affects the molecules that bacteria use for intercellular communication – Quorum Sensing (QS).

Chestnut honey stands out due to its high content of potassium, manganese, and calcium. The combination of these elements together with the proline amino acid stimulates collagen formation [12]. The effect of this combination of elements is further enhanced by polyphenols, which establish and maintain oxidative balance in the tissue. Proliferation is promoted by the slow release of hydrogen peroxide but both basic physical properties of honey are also important. Acidic pH regulates the number of matrix metalloproteinases and prevents their excessive multiplication, which prevents the breakdown of collagen. Natural sugars provide cells with energy. Cell proliferation and migration can proceed smoothly in a moist environment [13]; if the epithelialization is uninterrupted, the wound will heal without scarring.

Complications in wound healing due to resistance of bacteria to classical antibiotics stimulated biomedical research of potential use of chestnut honey for the preparation of wound dressing. Chestnut honey is already well established in modern wound dressings owing to its excellent physical characteristics (Table 2). Research shows that wounds heal three to five times faster in a moist environment compared to wounds that dry out. Therefore, in the last two decades [14], experts have focused on the study of materials and the development of dressings to ensure optimal conditions with adequate moisture and temperature in the wound. In the process of wound healing, it is crucial to establish a moist environment as soon as possible and use appropriate dressings to promote the healing process. 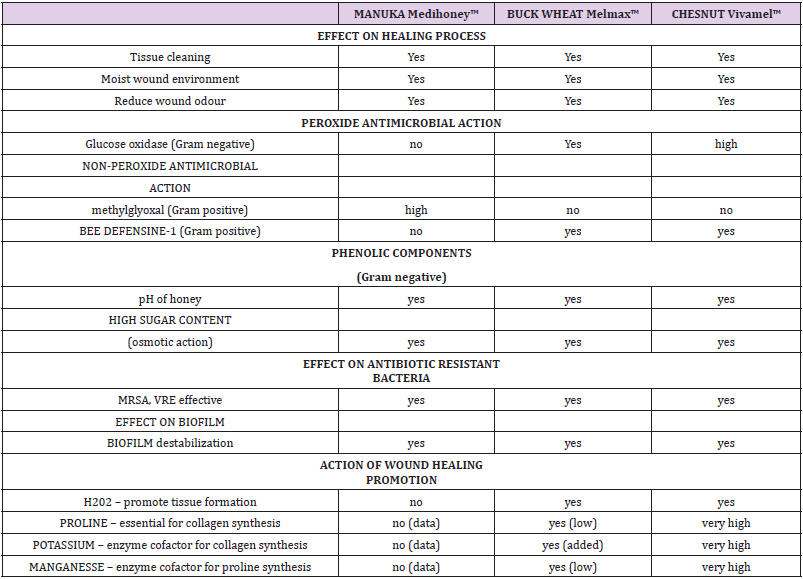 The effects of medical chestnut honey are:

- Decrease the possibility of wound infection,

- Stimulate the cleaning of necrotic tissue, due to osmotic activity of honey,

- Vicinity of the wound remains unaffected.

1. Honey is a saturated sugar solution that establishes and maintains a moist environment in the wound. Moist wound healing shortens the inflammatory phase [15], reduces the microbial burden, maintains an adequate level of growth factors, and accelerates collagen synthesis and epithelialization from the wound edges. The ratio of fructose to glucose also determines the viscosity of honey. Due to its perfect viscosity, chestnut honey can cover the wound bed quickly and completely, protecting it from external influences. Chestnut honey is the active ingredient in Vivamel™ wound dressings. Nonetheless, the carrier material of the dressing also plays an important role in establishing and maintaining moist environment in the wound. It can be non-absorbent or it can bind microbes and dead cells into its structure. When choosing the most appropriate type of the chesnut honey dressing, consider the amount of exudate [16]. There is more of it in the inflammatory phase, therefore, the Chesnut honey alginate dressing with high absorption capacity is most propriate.

In the granulation phase, the amount of exudate decreases, but we strive for a lower frequency of dressing changes, so we still need an absorbent carrier material [17]. The polyurethane foam with medical chestnut honey is the perfect choice. In the epithelialization phase, the wound exudate is weak or non-existent, therefore the non-absorbent Chesnut honey contact mesh is dressing of choise. Undilutedmedical chestnut honey is used as a primary dressing or added to others for a more intense activity. Wound dressings with Chesnut honey have been proven to not have an effect on blood sugar levels, so their use in diabetics is completely safe, as is in infants. The only contraindication is honey allergy, but we also recommend caution in people with bee venom allergy. According to Vincent Falanga’s classification, we assessed the progress of healing with the appearance of the wound bed and pain. The results are shown in (Table 3).

Table 3: Results of the study.

2. Six cases of venous leg ulcers that had been present from 8 to 12 years were included in a case study. The ulcers measured 817 square centimetres in total, the smallest with a surface area of four square centimetres, while the largest measured 400 square centimetres. In only six weeks of treatment, the wounds decreased by an average of 32 percent. The smallest wound healed after three dressings. The wounds were dressed every three to four days. Before the start of the treatment with polyurethane foam with chesnut honey, all the wounds exhibited fibrin. After only two to three dressings of the polyurethane foam with medical chestnut honey, the wounds were clean [18]. After six weeks, the predominant type of tissue in the wounds was granulation tissue and epithelization were progressing nicely from the edges. Venous leg ulcers are painful wounds, so the pain level was also monitored according to an analogue scale. On average, the patients assessed their pain level to be 8 before the treatment with polyurethane foam with chesnut honey and 3 at the end of the observation.

3. We usually use foams to treat wounds once wound bed is clean, that is, for the granulation phase. In our case study, at 7 venous leg ulcers, we used medical chestnut honey foam on ulcers whose wound beds were classified as C3 by Falanga´s classification [19]. Within 14 days, the wound beds of all wounds became B3. Medical chestnut honey foams have also been shown to be suitable for debridement and promoting granulation.

Figure 2: During treatment: medial half of ulcer treating with dressing with honey, lateral half with hydrofibre.

Figure 3: Lateral half of ulcertreated with hydrofibre dressing after 14 days. 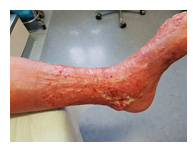 Figure 4: Medial half of ulcer treated with dressing with honey after 14 days.

Complications in wound healing due to resistance of bacteria to classical antibiotics stimulated research of use of chestnuthoney for the preparation of wound dressing. Chestnut-Honey is enables moist wound healing. High sugar content in honey causes osmotic action which is undesirable environment for microorganisms growth. Honey has antimicrobial effect on a variety of microorganisms including the resistant strains. It also promotes debridement, boosts immune system, has anti-inflammatory and antioxidant activities, stimulates wound regeneration and prevents malodor. Manifestation of honey’s antimicrobial activity is through activity of glucose oxidase secreted from bee’s feeding glands that after dilution of honey with water releases peroxide. Chestnuthoney contains high enough levels of kynurenic acid that prevents and destabilizes biofilm. Medical-chestnut-honey alginate and tube is a suitable for infected wounds, for the removal of fibrin in the inflammatory phase, while foam and contact also accelerates the granulation and epithelialization of ulcers.

Foam-dressings with honey can clean the ulcers wound bed after 3-5days by removing the fibrin. In this way affect or accelerate the healing process of ulcers, as the first granulations have already appeared during this period of time. The advantage of using foam dressings with honey is that they can be used in all stages of healing, and due to anti-inflammatory and antibacterial action, depending on the composition of the coating, and our past experience even in the presence of ulcer infections and inflammation around the ulcer. Foams with honey, in addition to promoting the cleansing and healing of ulcers, despite their action do not cause major pain (due to the rapid transition from the inflammatory to the granulation phase, the pain decreases more rapidly).

Thanks to the employees and the company Tosama from Slovenia, which developed and manufactures the Vivamel™ dressings.

Chesnut Honey and his Properties in Wound Healing

Out of all types of honey, chestnut honey is exceptional due to its composition. It is made from nectar and honeydew and is therefore a real treasure trove of substances – chestnut honey contains specific amino acids, proteins, enzymes, and elements that promote wound healing. Two of the three basic mechanisms are based on physical characteristics, namely the high sugar content and perfect ratio, as well as the acidic pH. The third mechanism depends on the glucose oxidase enzyme that is added to the honey by the bee.