Does Access to Remittance Improve Welfare Status of Households in Nigeria?

Remittance is defined as the proportion of migrants’ earnings sent from their destination of employment to their origin or communities (Samal [1]). They also are considered as compensation (brain gain) for the loss of human capital (brain drain) by a net labour exporting country (Ratha, et al. [2]). Remittances can be categorised as monetary versus non-monetary remittances; domestic versus international remittances, and inward versus outward remittances. Remittances have attracted attention in empirical studies with some concentration on their determinants and developmental impacts (Adenutsi [3]). Developing countries as a whole have consistently been the largest recipient of international remittances in the world. Between 1995 and 2005 the total amount of official migrant remittances received by developing countries increased by more than 300% (Adenutsi [3]). Remittances to developing economies reach US$338 billion in 2008, higher than its estimated value of US$328 billion (World Bank [4]). They are person-toperson flows, well targeted to the needs of the recipients, who are often poor, thereby assisting poor families deal with negative economic shocks (World Bank [5]). This makes remittances very important source of finance for the rural households traditionally known for high level of poverty (low welfare level) and low access to foreign aid, government grants or bank loans.

Remittances enable the hitherto risk averse farming households insured by remittances, to shift their portfolios towards riskier enterprises, an indicator of welfare (Chukwuone, et al. [6]). Adams [7] noted that increased workers’ remittance inflow reduced income inequality among households in rural Egypt. Adams [8] further established that remittances reduce the severity of poverty in Guatemala, with households spending greater percentage of income on durable goods than on non-durable goods. Taylor, 2005, submitted that international migrants’ remittances increased per capita income of households and reduced the incidence and depth of poverty in Guatamala. In addition, it improves human capital indicators (education and health) of the recipient countries Fajnzylber, et al. [9]. Increased per capita income, reduced poverty incidence, improved health, asset acquisition and human capital developments are all indicators of Welfare, which is synonymous with good quality of life (Narayan, et al. [10]). However, there are empirical facts that households domiciled in the rural sector received significantly less remittances than their urban counterpart did. It was also established that only between 30 and 40 per cent of all remittances are destined to rural areas (Netri, 2010), where the majority of the population lives. Such disparity in remittances distribution among household categories makes the effect of remittance on welfare unequal.

The study area is Nigeria, West Africa. The source of data is from the Living Standard Measurement Survey (LSMS, 2015/2016) collected by National Bureau of Statistics. Total respondents of 4,068 households were sampled and used for the analysis. The methods of analysis of data adopted are descriptive statistics, Multidimensional Welfare Index and Tobit regression model. Descriptive statistics was used to analyse the socioeconomic characteristics of the respondents and the amount of remittance received by households. Fuzzy set was adopted to estimate the multidimensional welfare status of each household in Nigeria. The Multidimensional Welfare Index (MWI) is a measure of acute global welfare developed by the Oxford Welfare and Human Development Initiatives (OWHI) with the United Nations Development Programme’s Human Development Report (UNDP, et al. [11-14]. The index method belongs to the family of measures developed by Alkire [15]. This method requires determining the unit of analysis (i.e. household), identifying the set of indicators in which they are deprived at the same time and summarizing their welfare profile in a weighted deprivation score. The households are identified as multidimensional worse off if their deprivation score is below a cross-dimensional welfare cut-off. The number of worse off people and their deprivation score (i.e. the percentage of simultaneous deprivations they experience) become part of the final welfare measure.

The constructed Multidimensional Welfare Index (MWI) is based on five dimensions: education, sanitation, standard of living, housing and asset, which were carefully selected as guided by literatures (following Pampalon, et al. [16-18]):

Fuzzy set involves constructing an index from array of items that could be linked to welfare (attributes of welfare). Costa [19], citing Dagum, (2002), gives an exposition of the methodological framework of fuzzy set theory. Given a population A of a households, A = {a1, a2, …, an}, the subset of worse off households B includes any household a1∈B which presents some degree of welfare in at least one of the m attributes of X, The degree of membership to the fuzzy set B of the i-th household (i=1,…, n) with respect to the j-th attribute (j=1,…, m) is defined as;

Fuzzy set framework also follows obtaining one-dimensional welfare ratio for each of the j attributes. This is the weighted average of xij with weight ni.

In order to determine the effect of migrants’ remittances on the welfare status of households, Tobit regression model was used since the values of the endogenous variable lies between zero and one with none having zero value. The household welfare threshold was put at 0.5 according to (UNDP [11]) the model for the regression analysis is specified thus,

6. β i = parameters to be estimated

8. ei= Disturbance term assumed to be independently and normally distributed with zero mean and constant variance

The dependent variable (Y) is the welfare index while the explanatory variables are as follows: 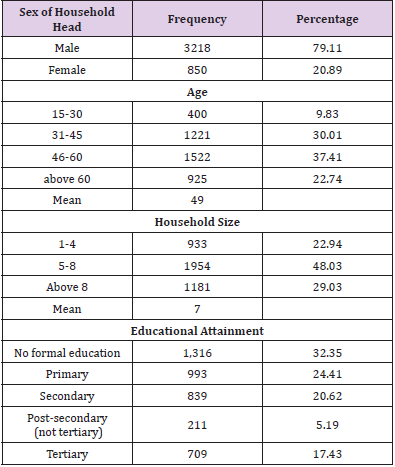 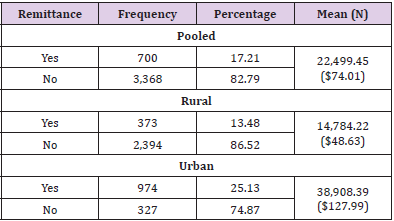 Table 2: Distribution of Households based on their Remittance Status.

Table 3: Contributions of Welfare Indicators to the welfare Status of Households.

In the pooled data, the welfare index of the households is 0.51, similar to that reported by Ashagidigbi et al, 2019 (0.58). The value is higher for households resident in urban sector of the country, while the rural resident is far below the country’s mean value. Across the sectors, the welfare status of remittance-receiving households in urban sector is better off than those in rural sector and Nigeria as a whole (Table 4). Similar trend is observed for the non-remittance receiving households. However, households that receive remittance have better welfare status in the pooled data and across the sectors than non-remittance receiving respondents. The finding aligns with that of Taylor, et al. [24], who posited that remittances reduce the incidence and depth of poverty among households in rural Mexico.

Table 4: Welfare Status of Households based on their Remittance Status in Nigeria. 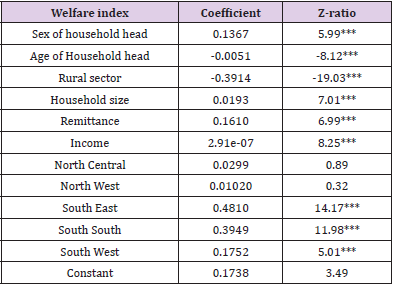 Table 5: Effect of Remittance on Households’ Welfare Status in Nigeria.

Furthermore, the welfare status of residents in the northcentral, southeast, southwest and south-south zones of the country increases by 2.99%, 48.10%,39.49% and 17.52% respectively, relative to the northeast residents. This aligns with Ashagidigbi, et al. [26] who concluded that inadequate access to better welfare is prominent among the northeast and northwest residents in Nigeria [27] Likewise, rural dwellers’ welfare status reduces by 39.14% in comparison to urban residents. This implies that the welfare status of households residing in urban sector and other zones with the exception of northeast are far better off. Hence, rural and northeast residents should be of primary focus when implementing poverty reduction measures in Nigeria.

Does Access to Remittance Improve Welfare Status of Households in Nigeria?