Spine fractures can be associated with difficult-to-treat pain. We report the case of a man with refractory, opioid resistant, pain due to thoracic spinal fractures secondary to melanoma metastases. We successfully used a bilateral erector spinae plane block (ESPB) to obtain analgesia both before and after surgery. This is the first demonstration of the use of an ESPB to treat opioid-resistant pain caused by a spinal fracture.

Spinal fractures are common and cause intense pain [1,2] due to the rupture of the vertebral body and local muscle contracture. Several analgesic techniques are usually proposed, including opioidbased analgesia, but the efficacy is often not optimal. Regarding ketamine, some studies with small numbers of participants showed significant effectiveness [3] but larger randomized clinical trials have not confirmed these results. Neuraxial techniques (epidural and intrathecal analgesia) have been shown to provide effective analgesia following elective spine surgery [4,5]hampering reconvalescense. We investigated the efficacy of patient-controlled epidural analgesia (PCEA, but are contraindicated in the context of vertebral trauma or vertebral fracture. The ultrasound-guided erector spinae plane block (ESPB), first described in 2016 [6], has been used in some cases of spinal surgery [7]but have various undesirable risks such as pneumothorax. The erector spinae plane block (ESPB including spinal decompression [8,9]but its effect on lumbar surgery is unclear. The aim of this study was to investigate the effect of the ESP block on postoperative opioid consumption and pain scores in patients undergoing spinal surgery.\nMethods\ nSixty patients undergoing open lumbar decompression surgery were randomly assigned to 2 groups. The ESP Group (n = 30. A case of EPSB in the emergency department was first reported in a patient with nonsurgical lumbar transverse process fracture [10]. The use of intraoperative ESPB was also recently reported to provide effective postoperative analgesia in a patient with traumatic rib and spine fractures [11]neuraxial techniques are often challenging or contraindicated due to spine fractures or coagulopathy. Erector spinae plane (ESP. We report here the use of ESPB as part of the analgesic perioperative treatment of multiple spinal fractures associated with refractory opioid-resistant pain. The patient provided written consent for the report of his case.

A 50-year-old man presented with pathological spinal fractures secondary to bone metastases from a melanoma. Fractures were located at T11 and T12 vertebral bodies. Patient had severe pain (numerical rating scale [NRS] 7-9/10 at rest, 9-10/10 at mobilization) despite multimodal analgesia including paracetamol, a non-steroidal anti-inflammatory drug (NSAID) (intravenous ketoprofene, 100 mg every eight hours), a continuous clonidine infusion (600 μg per 24 hours), a continuous infusion of ketamine (0.1 mg.kg-1 per hour), and morphine (10 mg IV per 4 hours). Pain was refractory and the patient showed signs of morphine intolerance: nausea and vomiting, and bradypnea without pain relief. He also presented anxiety and depression secondary to pain with dark thoughts and no self-projection into future. Thirty six hours after the fractures, he was proposed an ESPB to relieve pain. The ultrasound guided ESPB was performed in the post anesthesia care unit (PACU) under surgical aseptic conditions.

The patient was placed in the left lateral decubitus position in his bed, and was monitored with pulse oximetry, non-invasive arterial pressure and electrocardiogram during and up to 30 minutes after the block. The ultra-sound-guided ESPB was performed by the first author (Figure 1), using a high frequency ultrasound probe (12-18 Hz) and ultrasound system HS 40® (Samsung Health Care, Korea). The skin was sterilized with an alcoholic povidone-iodine solution and the ultrasound probe was placed in a sterile bag. The probe was placed transversely at the T10 level to center the spinous process. Then, the probe was moved laterally in order to center the transverse process at the T10 level and was moved sagittally to obtain a parasagittal view. The same procedure was performed on each side. An 80 mm 22 gauge needle (UniPlex NanoLine®, Pajunk, Germany) was inserted in-plane in a cranio-caudal direction to guide the needle tip between the posterior fascia of the erector spinae and the tip of the transverses process of T11 and T12. 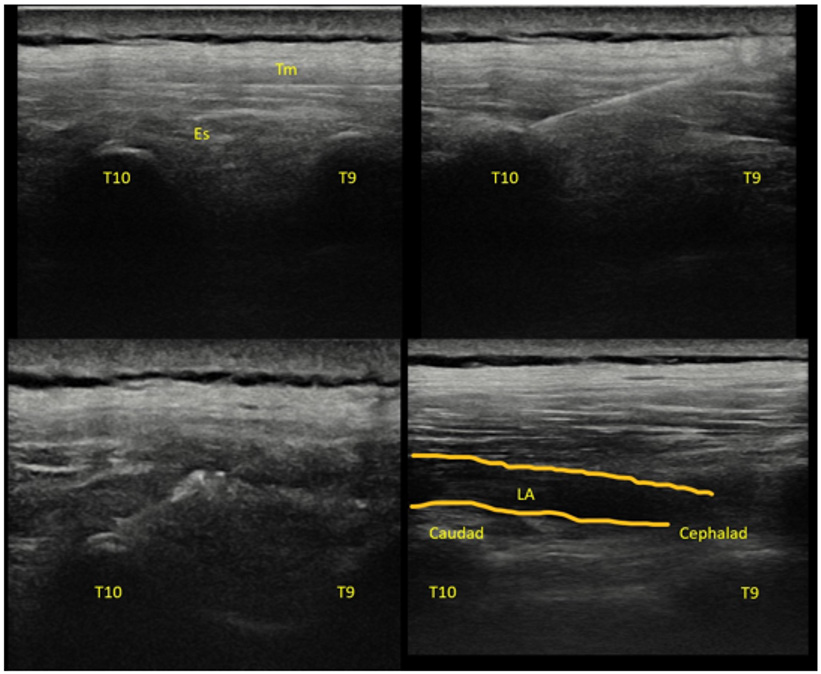 Correct needle position was first confirmed by hydrodissection with 0.5 mL of 3.75 mg.mL-1 ropivacaine followed by the injection of 20 mL of the same solution to avoid exceeding the maximum recommended dose of 3 mg.kg-1 in total. Patient reported first pain relief 15 minutes after the injection. At 30 minutes post-injection he had mild pain at rest (NRS 3/10) and moderate pain at mobilization (NRS 5/10). He also showed positive mood change, looking more positively to the future and improving his morale. Patient was very well relieved for 16 hours following injection. Later, pain at rest became moderate (NRS 5/10) and remained similar to mobilization. Twenty-four hours after performing the ESPB, a spinal arthrodesis was performed to fix the spinal fracture. Another ESPB block was performed to insure intra and postoperative analgesia. The patient was pain-free (NRS 0/10) in the PACU. Pain was absent for 12 hours at rest (NRS 0/10) and of low intensity at mobilization (NRS 2-3/10). Thereafter, pain was mild at rest and moderate at mobilization.

Bone tissue is a common target for metastatic cancers, with approximately 70% of patients with any metastatic cancer showing bones metastases [12]hypercalcemia, pathologic fracture, and spinal cord or nerve root compression. From randomized trials in advanced cancer, it can be seen that one of these major skeletal events occurs on average every 3 to 6 months. Additionally, metastatic disease may remain confined to the skeleton with the decline in quality of life and eventual death almost entirely due to skeletal complications and their treatment. The prognosis of metastatic bone disease is dependent on the primary site, with breast and prostate cancers associated with a survival measured in years compared with lung cancer, where the average survival is only a matter of months. Additionally, the presence of extraosseous disease and the extent and tempo of the bone disease are powerful predictors of outcome. The latter is best estimated by measurement of bone-specific markers, and recent studies have shown a strong correlation between the rate of bone resorption and clinical outcome, both in terms of skeletal morbidity and progression of the underlying disease or death. Our improved understanding of prognostic and predictive factors may enable delivery of a more personalized treatment for the individual patient and a more cost-effective use of health care resources.”,”container- title”:”Clinical Cancer Research”,”DOI”:”10.1158/1078-0432. CCR-06-0931”,”ISSN”:”1078-0432, 1557-3265”,”issue”:”20”,”- journalAbbreviation”:”Clin Cancer Res”,”language”:”en”,”note”:”- publisher: American Association for Cancer Research\nsection: Advances in Treating Metastatic Bone Cancer\nPMID: 17062708”,”page”:”6243s-6249s”,”source”:”clincancerres.aacrjournals. org”,”title”:”Clinical Features of Metastatic Bone Disease and Risk of Skeletal Morbidity”,”volume”:”12”,”author”:[{“family”:”- Coleman”,”given”:”Robert E.”}],”issued”:{“date-parts”:[[“2006”,10 ,15]]}}}],”schema”:”https://github.com/citation-style-language/ schema/raw/master/csl-citation.json”} . These bone metastases are very painful and alter quality of life. Some treatments are available to treat pain caused by bone metastases prior to their specific management (radiotherapy, surgery, minimally invasive surgery, kyphoplasty). Paracetamol, NSAIDs and opioids are typically used as first-line treatments, but with inconsistent efficiency. Ketamine does not seem to show significant effects on the management of these pains and has embarrassing side effects [3,13]including nociceptive, inflammatory, and neuropathic sources. Although opioids have long been a mainstay for perioperative analgesia, other non-opioid therapies have been increasingly used as part of a multimodal analgesic regimen to provide improved pain control while minimizing opioid-related side effects. Here we review the evidence supporting the use of novel analgesic approaches as an alternative to intravenous opioids for major spine surgery.”,”collection- title”:”Perioperative Management for Major Spine Surgery”,” container-title”:”Best Practice & Research Clinical Anaesthesiology”,” DOI”:”10.1016/j.bpa.2015.11.002”,”ISSN”:”1521-6896”, ”issue”:”1”,”journalAbbreviation”:”Best Practice & Research Clinical Anaesthesiology”,”language”:”en”,”page”:”79-89”,”source”:”Science- Direct”,”title”:”Non-opioid analgesics: Novel approaches to perioperative analgesia for major spine surgery”,”title-short”:”Non-opioid analgesics”,”volume”:”30”,”author”:[{“family”:”Dunn”,”given”:”Lauren K.”},{“family”:”Durieux”,”given”:”Marcel E.”},{“family”:”Nemergut”,” given”:”Edward C.”}],”issued”:{“date-parts”:[[“2016”,3,1]]} }},{“id”:1526,”uris”:[“http://zotero.org/users/2661041/items/ K3Q6Q6HK”],”uri”:[“http://zotero.org/users/2661041/ items/K3Q6Q6HK”],”itemData”:{“id”:1526,”type”:”article-journal”,” abstract”:”Background\nDelirium is a common and serious postoperative complication. Subanaesthetic ketamine is often administered intraoperatively for postoperative analgesia, and some evidence suggests that ketamine prevents delirium. The primary purpose of this trial was to assess the effectiveness of ketamine for prevention of postoperative delirium in older adults.\nMethods\ nThe Prevention of Delirium and Complications Associated with Surgical Treatments [PODCAST] study is a multicentre, international randomised trial that enrolled adults older than 60 years undergoing major cardiac and non-cardiac surgery under general anaesthesia. Using a computer-generated randomisation sequence we randomly assigned patients to one of three groups in blocks of 15 to receive placebo (normal saline. The gold standard management for analgesia is patient-controlled epidural analgesia (EA). In the case of spinal fracture, there is a contraindication to epidural analgesia. Moreover, EA has some risks and side effects, like epidural hematoma and low arterial blood pressure [4,14]. The paravertebral block is not described for spinal analgesia and has some risks, especially pneumothorax and low blood pressure.

Erector muscles of the spine consist of a group of three muscles (iliocostalis, longissimus and spinalis) located on the deep side of the back. Separated at the cranial part of the back, they join to form a common mass at the level of the sacrum. They allow the extension of spine in a symmetrical contraction. At the upper thoracic level, they are covered by the rhomboid muscle (T1-T5) and more superficially by the trapezius muscle (up to T12).

ESPB has been shown to be effective following spinal surgery [8,9]but its effect on lumbar surgery is unclear. The aim of this study was to investigate the effect of the ESP block on postoperative opioid consumption and pain scores in patients undergoing spinal surgery.\nMethods\nSixty patients undergoing open lumbar decompression surgery were randomly assigned to 2 groups. The ESP Group (n = 30, and very recently in cases of spinal trauma [11,12]. Cadaveric studies have confirmed the blockade of dorsal rami of multiple spinal nerves above and below the injection site when dye is injected below the fascia of the erector spinae muscle [6,15]. The ventral rami are blocked inconsistently and could be involved in the analgesic effects of ESPB without extension to the paravertebral zone. The local anesthetic spread, in both the cephalad and caudad directions is facilitated by the presence of the thoracolumbar fascia.

Thanks to the diffusion of the local anesthetic, we were able to perform the ESPB above the fractures. This allowed us to avoid injecting at the level of the fractured vertebra and to avoid possible anatomical modifications that could lead to difficulties in identifying the anatomical structures. ESPB is associated with a lower risk of side effects than the paravertebral block or epidural analgesia. This makes it faster to learn and probably easier to implement. We successfully tried to relieve this patient’s pain with the ESPB pending surgical management of this spinal fracture. This technique produced remarkable but temporary analgesia. An ESPB with continuous infusion via a catheter may be an interesting option for patients waiting spine surgery after a spinal fracture.

• Pierre Boussemart: This author helped in the management of the patient and reviewed this manuscript.

• Benoit Tavernier: This author helped in the management of the patient and reviewed this manuscript.

Spine fractures can be associated with difficult-to-treat pain. We report the case of a man with refractory, opioid resistant, pain due to thoracic spinal fractures secondary to melanoma metastases. We successfully used a bilateral erector spinae plane block (ESPB) to obtain analgesia both before and after surgery. This is the first demonstration of the use of an ESPB to treat opioid-resistant pain caused by a spinal fracture.