Angiosarcoma is a rare vascular tumor that originates from endothelial cells with a 1-2% incidence of all soft tissue sarcomas. Angiosarcoma is associated with poor prognosis attributed to a high rate of recurrence and metastasis with the lung being the common site of metastasis. Primary pulmonary angiosarcoma is an extremely rare tumor that presents with non-specific symptoms such as cough, weight loss, shortness of breath, and hemoptysis. We presented an interesting case of primary pulmonary angiosarcoma with an initial good outcome for 2 years following surgical and oncological management and unfortunately widespread metastasis on the third year of surveillance.

A 25-year-old female with no significant past medical history presented to her general practitioner with hemoptysis. Initially, she was treated with a course of antibiotics for suspicion of community-acquired pneumonia. However, symptoms persisted she was investigated with chest radiography which didn’t reveal any normality. Then she was referred to the respiratory team for a more thorough investigation with a computed tomography (CT) scan. CT scan revealed a multilobulated mass measuring 3.2x3.0cm compressing the superior aspect of the left main pulmonary artery without infiltrating it. The mass extends posteriorly between the left main pulmonary artery and the descending aorta with the endobronchial segment that occludes the apico-posterior segmental bronchus, concern regarding the early invasion of the AP window was raised (Figure 1). The mass was FDG avid on Positron Emission Tomography (PET) which was carried out later to facilitate understanding the nature of the lesion and look for peripheral metastasis. No metastatic disease was seen and a CT-guided biopsy was positive for synaptophysin stain and CD 31 which are markers for neuroendocrine and vascular tumors respectively. Endobronchial ultrasound-guided biopsy (EBUS) was inconclusive, and a multi-disciplinary team (MDT) discussion recommended surgical excision of the tumor as it localizes and to get a proper tissue diagnosis. 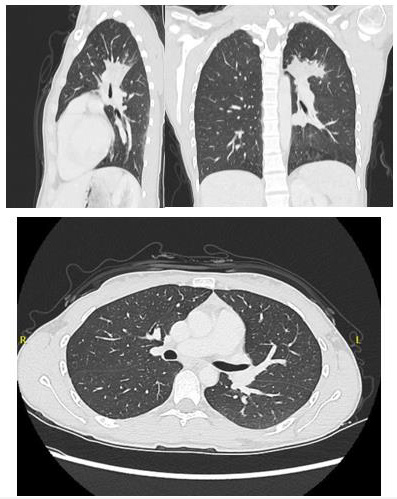 Figure 1: CT images demonstrating left multilobulated mass measuring 3.2x3.0cm compressing the superior part of the left main pulmonary artery without infiltrating it and extends posteriorly between the left main pulmonary artery and the descending aorta with the endobronchial segment that occludes the apical segment of the bronchus posteriorly with concern about invasion to the aortopulmonary window.

After two months of thorough investigations, the patient was referred for surgery. The initial preparation was for pneumonectomy given the size, central position of the mass, and suspicion of vascular invasion. Cardiopulmonary bypass was made ready in the theatre room if required. At surgery, a left upper lobectomy with a pulmonary artery vascular sleeve resection and systematic lymph node dissection was ultimately performed via posterolateral thoracotomy. The patient was discharged with no post-operative complications 6 days after the operation. The histopathology examination from the resected lung reported a tumor comprised of solid sheets of malignant epithelioid cells that stained for ERG, synaptophysin, vimentin, and focally for CD31, with negative staining for cytokeratins, GATA3, and mesenchymal, melanocytic, germ cell, and lymphoid markers (Figure 2). There was no rearrangement of CIC, ESWR1, or FUS genes. A differential diagnosis of angiosarcoma and undifferentiated round cell sarcoma was given. Follow-up CT scan at 3, 6,12, and 24 months showing no recurrence. She also received a combination of chemotherapy (vincristine, doxorubicin, cyclophosphamide, ifosfamide) and cycles of radiotherapy. She remains under regular surveillance with regular CT scan screening. Unfortunately, on 30 months follow up a widespread disease recurrence was found. 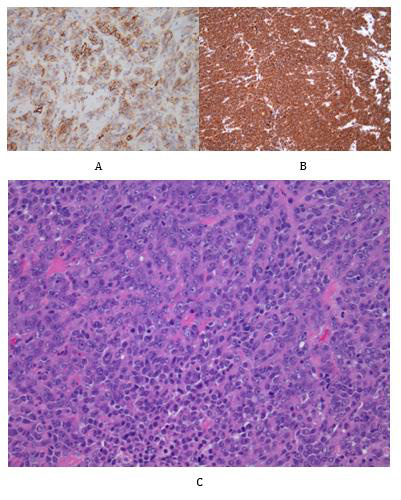 Histopathology and immunochemistry were considered as the only means to diagnose pulmonary angiosarcoma. This can be obtained through CT guided or bronchoscopy guided and if these measures failed to provide a definitive diagnosis as with our case surgical resection will become necessary to provide tissue diagnosis which is the most effective diagnostic tool for primary pulmonary angiosarcoma Campione, et al.; (Kojima, et al. [6,7]). The presence of malignant endothelial cells constitute the hallmark of angiosarcoma, but the morphology is variable ranging from solid to Vaso formative and spindled to epithelioid (Wei et al. [8]). Angiosarcomas also typically express ERG and CD31 with variable expression of CD34 and Factor VIII (Wei et al. [8]). Our specimen was positive for ERG, synaptophysin, vimentin, and focally for CD31, hence, the diagnosis of angiosarcoma was favoured although, with genetic studies for CIC being negative.

There are no standard guidelines for the management of primary pulmonary angiosarcoma. Surgical resection, chemotherapy, radiotherapy or both have all been reported in the literature. However, none of these have been associated with the positive outcome which can lead to further research to establish a causal relation. Although there is a suggestion that early surgical resection for localized tumour can lead to a better outcome (Tang, et al. [4]). This has been proven false with our patient which radical surgical treatment has been offered very early in the disease course with aggressive chemoradiotherapy, yet there was widespread disease recurrence. In conclusion, primary pulmonary angiosarcoma is a very rare malignant tumour with a very poor prognosis and difficult diagnostic means. We present a young patient with a localized presentation of a malignant epithelioid primary pulmonary angiosarcoma, who developed widespread disease recurrence despite radial surgical management, chemotherapy, radiotherapy and close surveillance with serial CT scan every 6 months. This case highlights the importance of investigating a way to tackle this lethal tumour rather than following the same algorithm for localized pulmonary malignancy and highlights that diagnosis other than carcinoma should be considered in patients presenting at a young age, even with epithelioid morphology.

The authors declared no potential conflicts of interest to research, authorship, and/or publication of this article.

The authors received no financial support for the production of this article.

Our institution does not require ethical approval for reporting individual cases or case series.

Written informed consent was obtained from the patient for anonymized patient information to be published in this article by the corresponding author.