Evaluation of Biliary Cholesterol, Biliary Ferritin and Expression of Apo B-100 Gene in Patients of Cholelithiasis

Methods: 40 patients of cholelithiasis were included for measurement of serum and biliary cholesterol and ferritin by ELISA. Expression of Apo B-100 gene was also evaluated in their blood along with 40 healthy volunteers as controls for gene expression.

Gall stone disease is a common disorder around the world. Choleliths are bile precipitates resulting from abnormalities in the metabolism of cholesterol, bilirubin and bile acids. [1]. The prevalence of cholelithiasis in India ranges from 2-29%, being higher in North Indians and females [1-3]. Gall Stones are classified according to their chemical composition into Cholesterol stones, Mixed stones and Pigment stones [4]. In western populations, stones that are rich in cholesterol are the predominant type (80%) but lower frequencies of cholesterol stones and higher frequencies of pigment stones are seen in many parts of Asia [5]. The pathogenesis of cholesterol stones primarily involves supersaturation of bile with cholesterol accentuated by accelerated nucleation and impaired gallbladder emptying being other factors. Relative concentration of cholesterol, bile salts and phospholipids in GB bile determines precipitation [5]. Anaemia due to iron deficiency is associated with gall stone disease. Serum ferritin, a marker of iron stores, exhibits low levels in iron deficient patients. In a study done on patients with cholelithiasis by Aggarwal et al, in 2019, it was seen that serum ferritin levels were lower in cases of cholelithiasis as compared to those in the normal population [6]. Ferritin is also released in bile in hemochromatosis.

In this study biliary iron concentration (per millimole of bile acid), was increased about twofold (p < 0.05) and biliary ferritin concentration about fivefold (p < 0.001) [7]. The levels of biliary ferritin in gallstone disease have not been studied so far. Genetic variation in cholesterol metabolism can be brought about by different isoforms of lipid transport and receptor molecules in the general population. Apo E and apo B-100 are prominent transporters that exist in polymorphic states in humans whose certain isoforms help in better uptake and delivery of cholesterol [8]. Apo B-100 serves as a ligand for receptor-mediated endocytosis of LDL. The gene is located on chromosome 2. High frequency of X+ allele in apo B-100 genes has been reported in gallstone patients from China [9]. Heterozygosity (X+/X-) of apo B-100 may be associated with gallstone disease and gallbladder cancer in India [10,11]. In a study in transgenic rabbits, it was found that Apo B-100 expression is associated with higher serum cholesterol and triglyceride levels [12]. In another study, rats fed on iron rich diet had a higher expression of Apo B-100 gene and had higher serum cholesterol and triglyceride levels [13]. Hence this study was undertaken to determine the levels of biliary ferritin and biliary cholesterol in patients of cholelithiasis and to see the association of expression of Apo-B gene in them.

This observational cross-sectional study was conducted in the Department of Surgery and the Department of Biochemistry at UCMS & GTB Hospital, Delhi from November 2018 to March 2020 with a sample size of 40 cases and equal number of controls for gene purposes. The research committee of the institute approved the study protocol. All consenting patients, except those with coexisting systemic and inflammatory illness and immunocompromise, diagnosed with symptomatic cholelithiasis willing to undergo laparoscopic/open cholecystectomy were included. For Apo B-100 expression, an equal number of healthy volunteers were included after ultrasound to exclude cholelithiasis in them. All patients of cholelithiasis and controls underwent history taking, radiological and biochemical investigations. A fasting blood sample of patients was taken for hematological evaluation, lipid profile, serum ferritin, and Apo B-100 gene expression. In the controls, only Apo B-100 gene expression was measured. Bile was obtained from the gall bladder of patients immediately after cholecystectomy for evaluation of biliary cholesterol and ferritin levels. Cholesterol and ferritin levels in both serum and bile were measured by ELISA. The reference range for serum ferritin was taken to be 29-248 ng/ml for males and 10-150 ng/ml for females [14].

Serum cholesterol levels less than 200 mg/dl were considered desirable, 200-239 mg/dl as borderline high and >240 mg/dl as high. Gene Expression comprised of 3 steps:
a) Extraction of RNA,
b) Synthesis of complementary DNA (cDNA) and
c) Quantification of Apo B-100 gene expression by quantitative Real Time PCR.

The mean haemoglobin level of the patients was 11.46 g/dl. On the basis of WHO classification, patients were divided into non anaemic, mildly anaemic and moderately anaemic. Most (72.5%) patients were anaemic (Table 1). The mean age of patients with moderate anaemia was significantly higher than those with no or mild anaemia (p=0.045) (Table 1).

The mean total cholesterol levels in the patients grouped on basis of hemoglobin levels did not vary significantly (p=0.222), though patients without anaemia had a higher mean serum cholesterol level than those with anaemia (Table 1).

Table 1: Associations of severity of anaemia.

1. There was a weak negative correlation between haemoglobin (g/dL) and biliary ferritin (ng/mL), and this correlation was not statistically significant (rho = -0.19, p = 0.249). 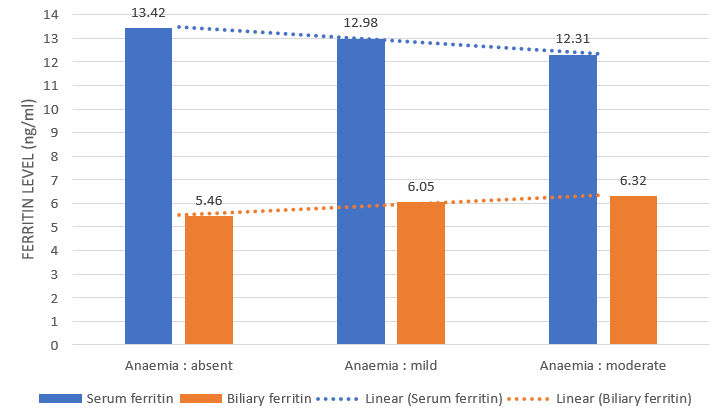 Figure 1: Levels and trends of serum and biliary ferritin in each anaemia group.

Cholelithiasis is a multifactorial disease having a complex interplay of metabolic, genetic and environmental factors that affect the disease process. In this study, the mean age of the 40 patients included was 34.65 years, with most patients in their 3rd and 4th decades of life. This age distribution was similar to the study conducted by Prakash, et al. [3] and Kanth, et al. [2]. Most other studies which aimed at studying the epidemiology of cholelithiasis found the disease to be more common in a relatively higher age group [1,17,18]. We also found the mean age to be significantly higher in the moderately anaemic group suggesting that anaemia increases with increasing age. Since anaemia and increasing age have both been described as independent risk factors for cholelithiasis [1,6], an additive effect of both seems to be at work in causation of the disease. A majority of the patients in this study were females (37/40, 92.5%). It is a well-established fact in literature that cholelithiasis occurs more commonly in the female population. Most of the patients in our study (26/40, 65%) had a BMI in the normal range suggesting that cholelithiasis is not just a disease of the obese; also seen by Kharga, et al. [19].

These findings lead us to believe that while serum cholesterol plays a role in pathogenesis of gallstone disease, low HDL levels may be a more relevant indicator for the disease. Da Luz, et al. observed in patients of coronary artery disease that the ratio of TG/ HDL and T. cholesterol/HDL are better indicators of disease than individual lipid values in serum [25]. Jiang, et al. found a strong positive association of CAD with cholelithiasis [26]. In the present study, we also found that as serum HDL levels decreased, there was an increase in triglyceride levels. Based on these findings we would like to postulate that it is the ratio of lipid parameters and not the individual levels of each parameter that may serve as better indicators for cholelithiasis. The alterations in ratios can identify individuals prone to cholelithiasis and an attempt can be made at disease prevention through lifestyle modification and management of dyslipidemia.

This contradiction suggests that there is a complex interplay of ferritin, cholesterol and anaemia in cholelithiasis and cant be simply explained by the individual levels of these factors. There was a higher biliary cholesterol level in patients with low serum ferritin than in patients with normal serum ferritin, though not significant (p=0.783), similar to a study conducted by Sahu, et al. [41]. Iron deficiency causes altered motility of gall bladder leading to biliary stasis leading to an increase in cholesterol saturation of bile [42,43].

A significantly higher amount of iron in pigment stones than in cholesterol stones was also found. Chandran, et al. [29] found a significantly higher amount of iron in mixed stones than in pigment and cholesterol stones. While the amount of iron was higher in pigment stones than cholesterol stones, this difference was not significant. An increase in biliary ferritin as anaemia increases and relatively lower levels of biliary cholesterol suggest a more frequent occurrence of pigment and mixed stones in our population. Since we found an increased biliary ferritin with increase in anaemia (which is an iron deficient state) in patients of cholelithiasis, it suggests that the relationship between cholelithiasis and iron deficiency anaemia is more complex than thought previously. Ferritin may have a larger role to play in the pathogenesis of cholelithiasis than to just be a marker of iron deficiency anaemia and it is not just a decrease in gallbladder motility and resulting biliary stasis due to the deficiency of iron which cholelithiasis [46]. It is possible that the biliary route of excretion of ferritin is an incidental finding with no serious implications on gallstone formation. The concentration of ferritin in bile may also be due to fluid absorption from the gall bladder leading to concentration of its contents along with biliary stasis secondary to iron deficiency.

Based on our findings, we would like to hypothesize that ferritin gets concentrated in bile in the gall bladder after excretion from hepatocytes and delivers iron into the bile which will play a role in the formation of gallstones. In our study, there was a significant moderate positive correlation between biliary cholesterol and biliary ferritin (rho = 0.52, p = <0.001, (Table 3)). It is known that cations in bile such as iron, calcium, copper and zinc promote cholesterol crystallization [45]. We would like to postulate that in patients with cholelithiasis, with the biliary cholesterol increase, there is a tendency for these cations to increase as well and lead to crystallization of cholesterol and formation of gallstones. An increase in biliary ferritin levels suggests its role in delivering iron which serves as a cation in the biliary cholesterol rich bile leading to cholelithiasis.

On taking all 40 patients as cases and all 40 healthy volunteers as a control group, a 1.001 fold change upregulation of Apo B-100 gene was observed (p=0.740). On assessing individual cases, equal distribution of up and downregulation in patients of cholelithiasis was seen (Figure 2b). In 2005, Wang, et al. assessed intestinal cells of mice and found that absence of expression of intestinal Apo B-48, but not Apo B-100, reduces biliary cholesterol secretion and cholelithogenesis, possibly by decreasing intestinal absorption and hepatic bioavailability. While the findings of Apo B-100 expression were similar to the present study, they studied the gene expression in intestinal cells of mice while this was studied in blood from humans in our study. Since we found a relatively higher expression of Apo B-100 in the patient group, though not statistically significant, it suggests Apo B-100 can have a role in etiology of cholelithiasis.

Evaluation of Biliary Cholesterol, Biliary Ferritin and Expression of Apo B-100 Gene in Patients of Cholelithiasis

Methods: 40 patients of cholelithiasis were included for measurement of serum and biliary cholesterol and ferritin by ELISA. Expression of Apo B-100 gene was also evaluated in their blood along with 40 healthy volunteers as controls for gene expression.