Blue Cumin Tea: Prophetic Herbal Tea for the Therapy of Hypercholesterolemia in the COVID-19 Season

Results: Patients with blue cumin herbal tea gave good results, marked by reduced symptoms of neck and head pain, and reduced aches and tingling sensations. From the results of the cholesterol test, there was a significant decrease.

Herbal tea is a term for a mixture of flowers, leaves, seeds, roots, or dried fruit to make a drink which is also called herbal tea. Although called “tea”, this herb or drink does not contain leaves from the tea plant (Camellia sinensis). Herbal teas are usually brewed with hot water to get a fragrant drink. However, herbal teas made from plant seeds or roots often need to be boiled before they are filtered and ready to serve. Even though they contain flowers or dried fruit, teas made from tea leaves such as jasmine tea or Earl Gray tea are not called herbal teas. The mixture of citrus bergamot in Earl Gray tea or jasmine flowers into jasmine tea is intended as a fragrance to vary the aroma of the tea. Herbal teas are available in cans, tea bags, or ready-to-drink herbal teas in boxes. Herbal teas are also often advertised as health drinks to cure various diseases. In addition, ingredients collected from the garden, such as hibiscus flowers, chrysanthemums, or chamomile, and fragrant leaves such as peppermint and rosemary, after drying can be mixed into herbal teas. However, in this study, the authors took a mixture of black cumin seeds and telang flowers which were dried and put in a tea bag with rock sugar. Black cumin seeds have been known for thousands of years as a healer of various diseases as stated in the following hadith narrated by Bukhari, “The black seed can heal every disease, except death”. The author uses the method in herbal teabags because the use does not use alcohol for extraction where Rasulullah SAW explicitly said “Khamr is not a medicine, but it is a disease” (HR. Muslim: 1984) (Figure 1). 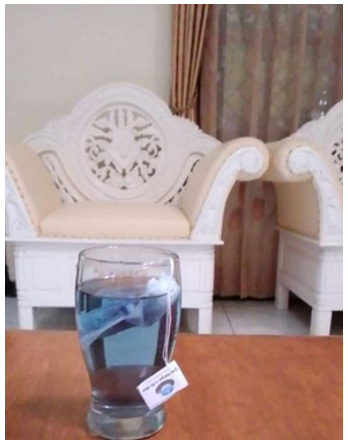 1) Dry 100 grams of black cumin seeds
2) Dry 100 grams of butterfly pea flower
3) Enter 1/2 teaspoon of the mixture of herbal ingredients in a tea bag with 1 piece of white rock sugar
4) Then serve by dipping it in boiling water
*Gifting of telang flowers is intended to give a modern tea color that is more beautiful and also gives a different sensation of freshness in drinking tea.

Drink once a day in the morning. This study uses an experimental post test only control group design using humans as research subjects. Inclusion criteria were clinical patients with:
1) History of hypercholesterolemia without comorbidities
2) Over 30 years old
3) Willing to participate in this research
There were 2 treatment groups, namely the group that drank herbal tea and the second group who routinely used simvastatin 20 mg at night. We got each group of 5 volunteers. Then the study was conducted for 1 month.

The data obtained from the examination of serum cholesterol levels were numerical data, then the data was tested for normality using the Shapiro Wilk test and the results obtained that all groups were normally distributed with p > 0.05 (Table 1). After the data is normally distributed, Levene’s test is carried out to find out whether the data is homogeneous or not. And the results obtained p = 0.672 (p>0.05) so it can be said that the variance is homogeneous. Because the data was said to be homogeneous and normally distributed, a one-way ANOVA test was carried out to analyze the differences between groups. Based on table 2, the p value of the one way ANOVA test is 0.0001 (p < 0.05) so it can be concluded that there are significant differences in cholesterol levels between groups.

Lipoproteins are a combination of nonpolar lipids (triacylglycerol and cholesteryl esters) with amphipathic lipids (phospholipids and cholesterol) and proteins that function to transport lipids in blood plasma. One of the four main groups of plasma lipoproteins is low density lipoprotein (LDL) [1]. LDL functions as a cholesterol carrier for tissues and cells, where cholesterol is needed for membrane synthesis, modulation of membrane fluidity, and regulation of cellto- cell communication [2]. LDL cholesterol has a major role in the development of cardiovascular disease, especially atherosclerosis. The role of LDL cholesterol begins early in atherogenesis, where LDL cholesterol accumulates in the tunica intima of arteries. High LDL cholesterol levels can increase the risk of atherosclerosis [3]. Atherosclerosis can cause various cardiovascular diseases, one of which is coronary heart disease (CHD). Nigella sativa is an herbal plant from the Ranunculaceae family [4]. Many researchers have succeeded in revealing the broad pharmacological potential of this herbal plant. N. sativa is commonly known as black cumin [5,6]. Black cumin seeds and oil are usually used as a tonic and traditional medicine for various ailments [7]. Black cumin seeds contain tymoquinone [8] which can reduce LDL cholesterol serum levels in 2 ways, namely by inhibiting the activity of the HMG-CoA reductase enzyme and increasing the expression of mRNA in the LDL receptor. Simvastatin can only reduce serum LDL cholesterol levels through inhibition of HMG-CoA reductase enzyme activity, so that serum LDL cholesterol levels of patients given black cumin extract are lower than those given simvastatin. This is an interesting finding from this study, wherein the serum LDL cholesterol levels of hypercholesterolemic patients given simvastatin were initially estimated to be lower than those given black cumin extract but on the contrary. Symptoms of hypercholesterolemia such as a heavy neck, difficulty sleeping and tingling can be reduced from the first day of using blue cumin tea, while for simvastatin, patients still often complain of feeling dizzy and heavy.

Simvasratin sold in Indonesia at this time also does not have an official halal certificate from the BPJPH institution. Simvastatin is a drug that is commonly consumed by dyslipidemia patients and works mainly in lowering serum LDL cholesterol levels, but like other drugs, simvastatin also has various side effects for the body. Some of the side effects of simvastatin are liver injury, diabetes risk, and muscle injury. Muscle injuries that occur due to the side effects of simvastatin are myopathy and rhabdomyolysis, and these muscle injuries are more common in patients taking 80mg of simvastatin daily, so the use of a dose of simvastatin 80mg/day has been prohibited. Through the data obtained from this study, blue cumin tea can be used as a substitute therapy that has guaranteed its halalness for those with high serum LDL cholesterol levels [9]. This study shows faster results with the use of blue cumin tea within 1 month and does not have to be consumed continuously like simvastatin and does not cause boredom because of its attractive taste and color. Patients are sometimes quite saturated when consuming continuously in the usual way and with unpleasant side effects.

The author wishes to say Alhamdulillah, sholawat and greetings to the Beloved Prophet Muhammad who has illumined the way for us all so that we do not get lost in living in a temporary world. The authors also thank the patients at Maryam and Isa Clinic who volunteered to participate in this study. And also to the writer’s parents.

Blue Cumin Tea: Prophetic Herbal Tea for the Therapy of Hypercholesterolemia in the COVID-19 Season

Results: Patients with blue cumin herbal tea gave good results, marked by reduced symptoms of neck and head pain, and reduced aches and tingling sensations. From the results of the cholesterol test, there was a significant decrease.