Previously unknown negative consequences of ionization of human body cells by galactic cosmic rays were discovered, which are expressed in a decrease in fertility and an increase in mortality, which are manifested to the maximum extent in females at the prenatal stage of development in conditions of weak solar activity while living in the North.

The phenomenon of the predominance of boys among born children has been known for more than 300 years. Back in 1778 P.-S. Laplace showed that statistically this difference cannot be considered an accident. Among the proposed explanations, the most popular hypothesis is that we are dealing with a kind of preventive life mechanism designed to ensure the gender balance of populations. According to this logic, the excess number of males should reach a maximum at the beginning of fetal development and then decrease with age. The latest data from large-scale studies do not confirm the idea of genetic prerequisites for gender imbalance [1,2]. Obviously, it is not by chance that no structures have been found in the genetic apparatus of a human cell that could be responsible for the offspring sexual differentiation. Reliable establishment of gender discrepancy at birth not only in humans, but also in different groups of animals allows us to talk about a global pattern. It has not yet been possible to reveal its origin. It also remains unclear what environmental factors can lead to the occurrence of local anomalies of opposite signs. The solution to the problem is further complicated by the fact that significant variations in the sex ratio in humans have been found in recent decades, which are clearly not in any way associated with conscious actions such as selective abortion. The substantiation of the hypothesis of the ionization of the X-chromosomes by galactic cosmic ray (GCR) as the cause of changes in the gender ratio in space and time is given below. Particles of galactic cosmic origin carry an energy close in magnitude to dangerous X-ray quanta, but their effect lasts around the clock, throughout human life, in the open air and at home. First of all, the female body suffers from it.

The analysis was based on the demographic statistics of Iceland, Norway, Sweden, Finland and Denmark with Greenland, which was determined by the quality and quantity of the necessary information, as well as the location of the listed countries in high latitudes, where the intensity of GCR increases due to the lower thickness of the atmosphere. For comparison, information on the southern regions was used. The values of the GCR intensity were taken from the observations of the neutron monitor in Oulu (Finland, 65.05 ° C), operating since 1964. Radiation conditions in previous years were characterized using reconstructed data and Wolf numbers, an indicator of solar activity, from which the intensity of GCR is in close inversely proportional dependence (correlation coefficient -0.87), since the Sun modulates the GCR. To test the hypothesis put forward, the method of mental critical experiment was used. If the assumption about the effects of GCR on the organism correctly reflects reality, the following events that cannot be explained from any other point of view should be associated with an increase in their intensity over time:
1) A decrease in the girl birth rate,
2) An increase in female mortality and
3) An increase in the frequency of death of the embryo and fetus of the female sex, and with a decrease - phenomena of the opposite direction.
In addition, it should be expected that the level of risk of negative consequences of exposure to cosmic radiation will be maximum in the northern latitudes. The analysis of demographic events was carried out using the methods of superimposed epochs and minimax (comparison of anomalies of different signs). The ratio of the number of female and male groups was adopted as the main indicator of demographic processes. The periods were considered, the middle of which fell on the years of minimum or maximum solar activity (and, accordingly, the highest or lowest GCR intensity).

Expected results of the first mental critical experiment is as follows: at a high intensity of GCR, the birth rate of girls should be abnormally low, and at a reduced intensity - above average. Powerful galactic radiation causes a significant drop in the birth rate of girls, as can be seen from the statistics of Iceland, and there is a characteristic delay in the effects of 1-2 years (Figure 1). A longterm increase in the intensity of GCR, accompanying the weakening of solar activity, entails a reduction in the girl birth rate (Figure 2). The gender index, as expected, increases after a period of very low GCL intensity, when the Sun is abnormally active and the solar wind blocks the flows of high-energy particles (Figure 3). Interestingly, in Greenland, after the minimum GCR in 2000, the ratio of newborn girls and boys with a weight of 3000 g or more reached an absolute maximum of 1028 (with an average of 900). The essence of the second thought critical experiment: it can be predicted that galactic rays of high energy increase female mortality. Using the example of Sweden, it is clearly seen that with a positive anomaly in the intensity of GCR, the maximum of female infant mortality naturally occurs, and in years of low intensity of GCR, when the Sun is very active, the situation with female infant mortality improves dramatically (Figure 4). The influence of galactic radiation is well traced by trends in infant mortality. A long-term increase in the intensity of GCR as a result of the weakening of solar activity is associated with an increase in the level of female infant mortality (Figure 5). 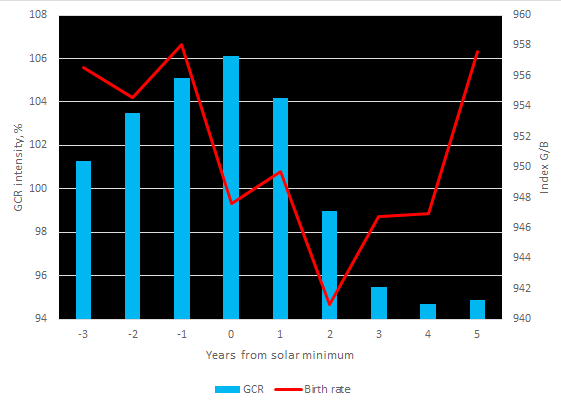 Figure 1: The drop in the birth rate of girls in Iceland after a period of high intensity of GCR (reconstruction) during the time of calm Sun of the 11-year cycle. Averaging over the period 1838-2013, 16 cycles, based on data on 554,000 events.

Note: Calculation based on data of Statistics Iceland, WDC-SILSO, Royal Observatory of Belgium, Brussels and Cosmic Ray Station of the University of Oulu. 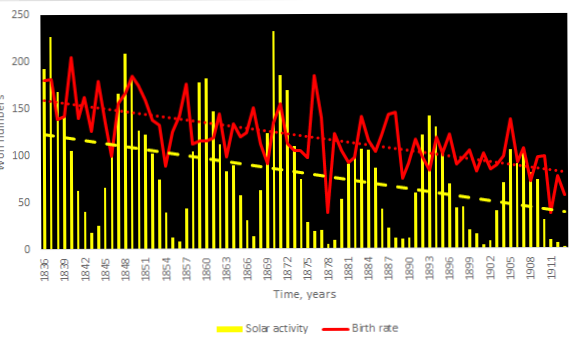 Figure 2: The tendency for a decrease in the birth rate of girls in Finland as a result of an increase in the intensity of GCR with a weakening of solar activity in 1836-1911. Averaging according to 5293000 events.

Note: Calculation based on data of Statistics Finland, WDC-SILSO and Royal Observatory of Belgium, Brussels. 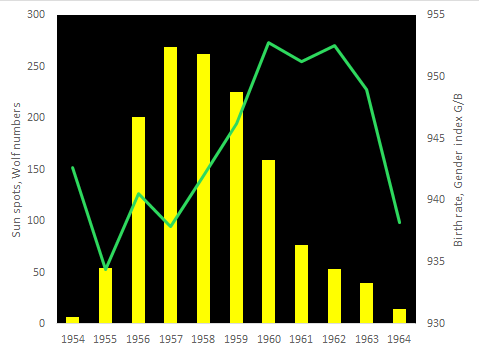 Figure 3: An increase in the birth rate of girls in Denmark due to low energy level of GCR with abnormally high solar activity in the mid-50s of the twentieth century.

Note: Calculation based on data of Statistics Denmark, WDC-SILSO and Royal Observatory of Belgium, Brussels. 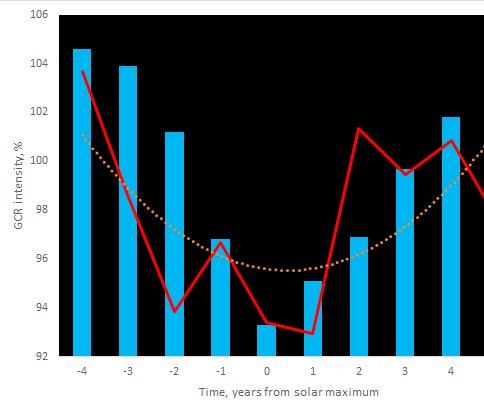 Figure 4: The dependence of female infant mortality on the intensity of UCS by the years of the solar activity cycle. Averaging over the period 1757-2019, for 24 cycles. The polynomial trend of mortality is shown

Note: Calculation based on data of Statistics Sweden, WDC-SILSO, Royal Observatory of Belgium, Brussels and Cosmic Ray Station of the University of Oulu. 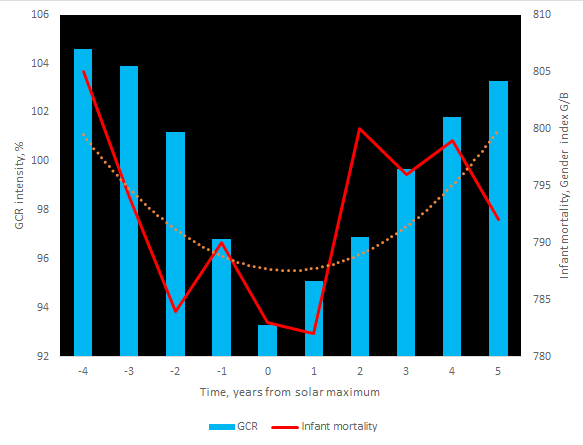 Figure 5: The female infant mortality in Finland and the intensity of GCR in last decades. The Linear trends are shown.

Note: Calculation based on data of Statistics Finland and Cosmic Ray Station of the University of Oulu.

Nowadays, there is an increase in galactic particles energy associated with a weakening of solar activity, which determines the tendency to aggravate the risk of death of newborn girls on the first day of life. Attention is drawn to the coincidence in time of anomalies of different signs: in Norway in 1959, after two years of abnormally high solar activity, the gender indicator of infant mortality decreased to a minimum of 706, and in Greenland, with a minimum of GCR intensity in 1999-2000, the index reached the lowest values, respectively, 444 and 571. It should be noted that the negative impact of high-power galactic rays in the north covers not only newborns, but also the entire female part of the population. Thus, the era of the solar minimum of Dalton at the beginning of the 19th century was marked in Finland by an increase in total female mortality 3-6% higher than average. The third critical experiment should show that high-energy particles penetrating the body, especially in the early stages of its development, are capable of destroying the genetic apparatus and causing mutations, which leads to antenatal mortality and an increase in the frequency of stillbirths. And indeed, an abnormally high frequency of stillbirths among girls is recorded precisely during the years of high intensity of GCR in the calm Sun (Figure 6). In addition, judging by the information from Denmark, the risk of female stillbirths increases in the conditions of contemporarty growth of GCR energy due to the weakening of the solar wind (Figure 7). Finally, it should be assumed that the phenomena discussed above are most pronounced in the northern regions, where the amplitude of fluctuations in the intensity of GCR is significantly greater than in the southern ones. Demographical statistics confirms this (Figure 8). 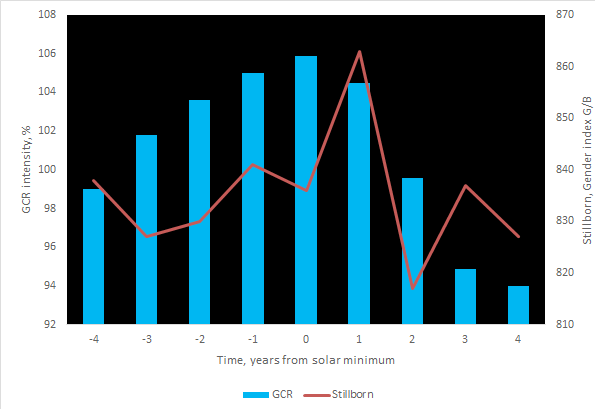 Figure 6: The relationship of female stillbirths with the intensity of galactic rays over the years of the solar cycle. Averaging over the period 1861-2012 for 14 cycles.

Note: Calculation based on data of Statistics Sweden, WDC-SILSO, Royal Observatory of Belgium, Brussels and Cosmic Ray Station of the University of Oulu. 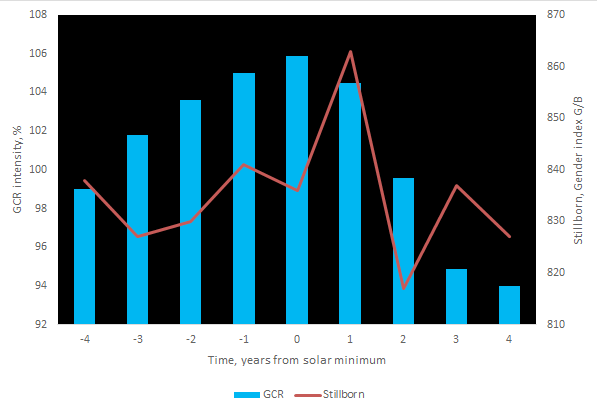 Note: Calculation based on data of Statistics Denmark. 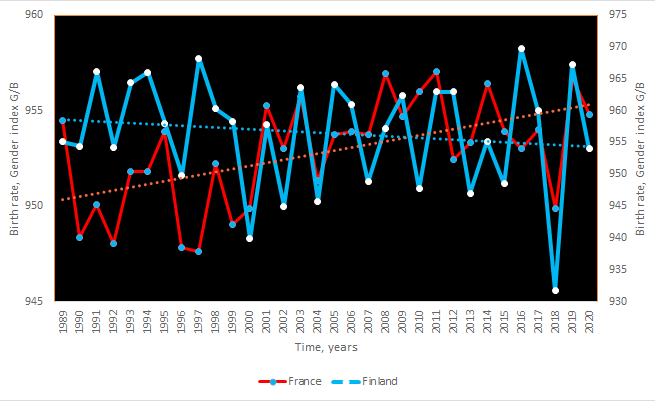 Figure 8: Сharacteristic differences in the birth rate of girls between the north (Finland) and south (France) of Europe.

These facts - their number could be multiplied - indicate the destructive role of high-energy galactic particles in relation to the female body in the early stages of individual development, which is caused by the ionization of the X chromosomes. The discovered phenomenon not only demonstrates the cause of the global gender imbalance, but also allows us to explain the origin of patterns that remained mysterious, for example, an increase in the number of boys born with the latitude and altitude of the terrain. However, the most important conclusion of the study is the need to classify GCR as the most serious health risk factors in the environment.

Previously unknown negative consequences of ionization of human body cells by galactic cosmic rays were discovered, which are expressed in a decrease in fertility and an increase in mortality, which are manifested to the maximum extent in females at the prenatal stage of development in conditions of weak solar activity while living in the North.