Healthy bone metabolism is a balance between bone formation and resorption. However, when resorption dominates progressive bone loss ensues. If this imbalance is not arrested, over time, osteopenia and finally osteoporosis will develop. This silent, ubiquitous process eventually leads to fragility fractures in the latter decades of life. Traditional calcium supplementation has clear limitations, driving the need for alternative calcium supplements to improve bone health. This study is a randomized, blinded, calcium-carbonate controlled cross-over study of serum calcium levels 24 h after CalGo™ (bone meal derived from Atlantic Salmon) oral supplementation in postmenopausal women. A significant increase in serum calcium levels were seen with CalGo™ compared to baseline values and as compared to calcium carbonate. All results remained within normal limits. No increases in serum levels of vitamin D or creatinine were observed with either supplement. We conclude that bone meal from Atlantic Salmon can offer an alternative for calcium supplementation.

Bone metabolism is a dynamic process between bone formation and bone resorption. In the formative years bone mass density progressively increases and a peak is reached in humans in the third decade of living [1]. From this point onwards bone resorption exceeds bone formation resulting in a gradual loss of BMD of 0.5-1.0% per year, and a concomitant deterioration of the bone microarchitecture. This eventually leads to osteopenia and osteoporosis [2,3]. Osteoporotic related fractures affect hundreds of millions of people and is a major health problem worldwide [4]. To put the burden of osteoporosis and fragility fractures into perspective, in Europe, fragility fractures cause a greater impairment of function compared to most types of cancer and is a leading cause of morbidity resulting from chronic disease [5]. Today the chronic treatment of osteoporosis aims to reduce bone resorption rather than to increase the rate of bone formation. Calcium supplementation has been a cornerstone in these attempts to prevent loss of BMD, as reflected in reports that more than 40% of Americans regularly take calcium supplementation [6]. However, calcium supplementation has not delivered the desired effect in preserving bone mass and preventing frailty fractures [7]. A review of 33 clinical studies found that supplementing with calcium, vitamin D, or both, failed to reduce fracture risk among otherwise healthy elderly individuals [8].

Fish bones have a high calcium content, and large quantities of this raw material are available as a by-product from the aquaculture industry. Fish bones have been previously described as an alternative to standard calcium carbonate supplementation [9]. Studies indicate that fish bone calcium induces bone biological activity, increasing bone formation. The investigational product in this current trial (CalGo™, produced by HBC) is derived from offcuts of salmon filet production, and contains 60% calcium salts, primarily in the form of natural hydroxyapatite (nHAP) and 36% protein, mainly Collagen. Studies have shown that the intake of Collagen has a positive effect of increasing BMD in several in-vivo bone growth models [10]. CalGo™ has also shown an osteoinductive effect by increasing osteoblast activity in-vitro [11] and in-vivo [12]. The main aim of this study was to investigate the serum level of calcium in healthy postmenopausal woman 24 hours after a single dose of CalGo™.

The present study was carried out at PGH Orthopedic & Urology Clinic, Mumbai, India. The study was designed as a randomized controlled, double blind, crossover study. The study-subjects had five study visits (Figure 1). At the first visit (day 0) they were randomized, using Research Randomizer (www.randomizer.org), into either Group A or Group B. The inclusion and exclusion criteria are given in (Table 1). A total of twenty-one subjects were assessed for inclusion, and twelve postmenopausal females between 55- 75 years of age met the eligibility criteria and were included. All subjects who were included completed the study. A standard 1g dose of calcium carbonate was selected and the dose of CalGo™ was calculated to deliver an equivalent quantity of elemental calcium. Both tablets were of similar appearance and size. Group A was given 4x500 mg CalGo™ at visit 2 (day 1), and their blood sampled at visit 3 (day 2). At visit 4, which followed a 7-day washout period (day 8) they were given 4x250 mg calcium carbonate, and the last visit 4 (day 9) the second blood samples were collected. 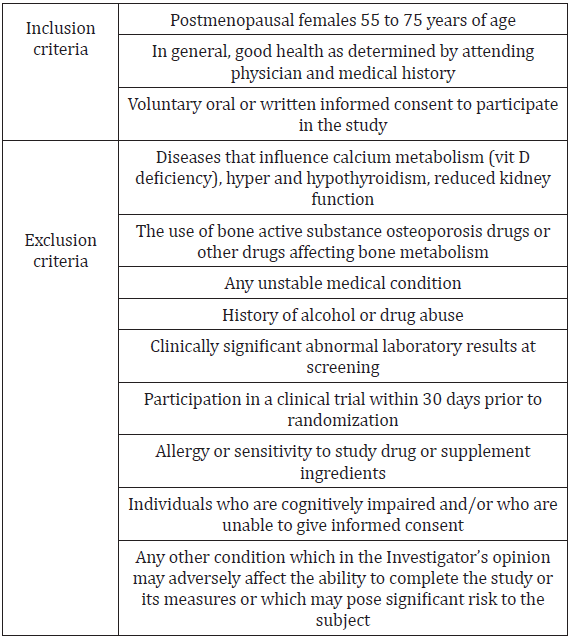 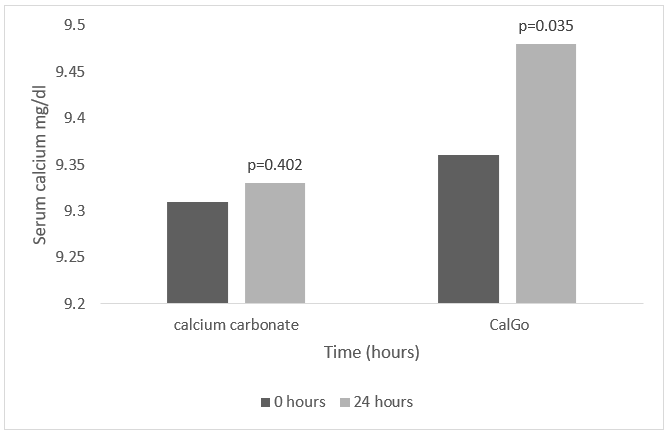 Group B was given 4x250 mg calcium carbonate at the visit 2 (day 1), and then blood samples at visit 3 (day 2). At visit 4, after 7 days of washout (day 8) they were given 4x500 mg CalGo™, and the last visit 4 (day 9) the second blood samples were collected. All subjects were fasting 8 hours before visit 2 and 4. Blood samples were collected at baseline and at each follow visit, and the samples analyzed for serum calcium (Arsenazo method), serum creatinine and serum calcefidiol. Safety was assessed at every visit, and each subject was specifically asked about nausea, headache, and racing pulse at every visit. All subjects were provided with information of the purpose, procedures and risks with the study, and informed consent was obtained.

The statistical analysis of the data was performed using a paired one-tailed Student t-test. All values are reported based on paired, one-tailed significance with p < 0.05 being statistically significant (95% confidence level).

This study was conducted in compliance with the “Guideline for Clinical trials on Pharmaceutical Products in India-GCP Guideline” issued by the Central Drug Standard Control Organization, Ministry of Health and Government of India.

Baseline demographics were typical for a postmenopausal patient group. Mean age was 65 years (SD+/-5.2), BMI 25 (SD +/-2.9) and almost 60% were non-smokers. Two thirds were on concomitant medication. (Figure 2) shows the changes in serum values in calcium, calcifediol and creatinine after CalGo™ and calcium carbonate. The mean serum calcium level 24 h after calcium carbonate oral dosing did not show a statistically significant change at 95% confidence level (9.31 to 9.33 mg/dL, SD ± 0.8). The mean serum calcium level 24 h after CalGo™ oral dosing showed a statistically significant 1.28% increase at 95% confidence level (9.36 to 9.48 mg/dL, SD ± 0.9, p < 0.05). Laboratory reference range was 8.5-10.0mg/dL. The changes in serum calcifediol are also shown in (Figure 3). The mean serum calcifediol level 24 h after oral dosing of either calcium carbonate or CalGo™ was 20 ng/mL, SD ± 2.65. We used a serum calcifediol cutoff level of < 20 ng/mL as an indicator of the body responding to an increased uptake of calcium with a corresponding reduction in calciferol levels. Neither the calcium carbonate dosed subjects nor the CalGo™ dosed subjects showed a correlation between 25-OH Vitamin D (calcifediol) levels and serum calcium increase in this study. Changes in serum creatinine levels were used as a measure of renal safety. No change in mean serum levels was seen across the study treatments for the duration of the study. 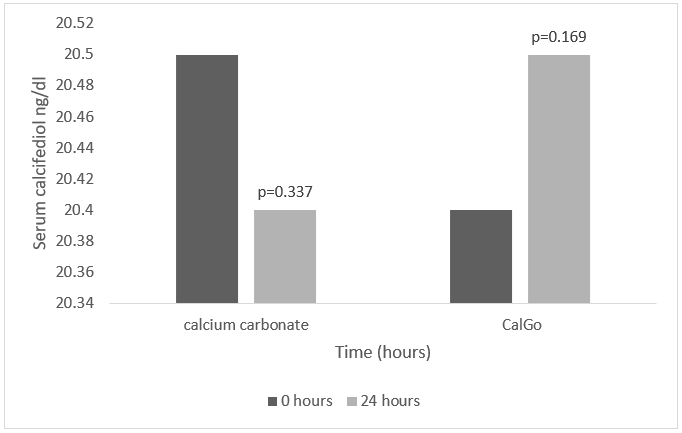 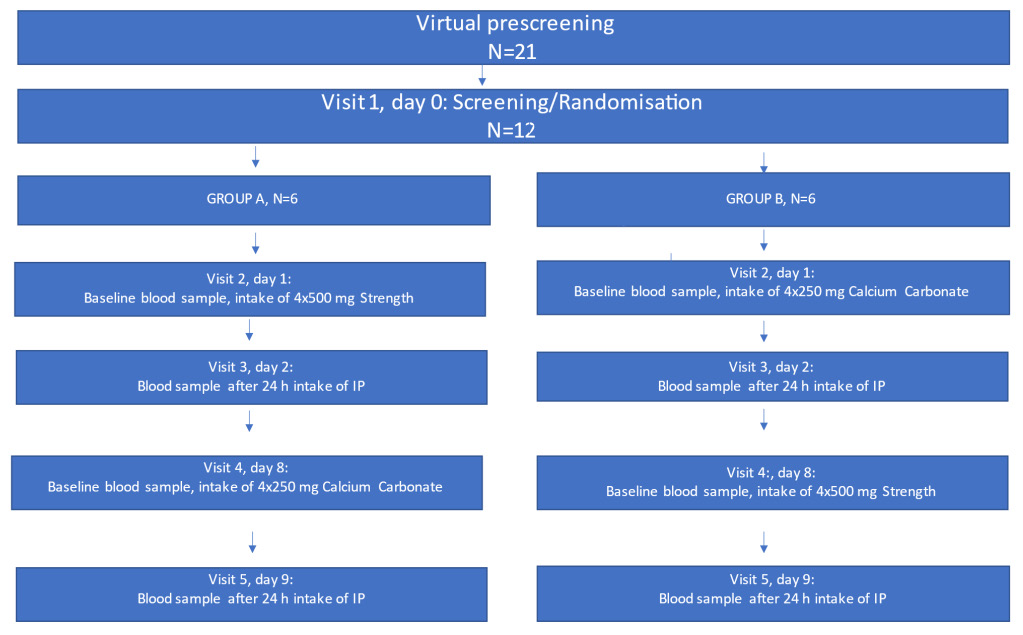 In the present study we show that a natural form of calcium hydroxyapatite, CalGo™, significantly increased serum calcium compared to baseline values. Importantly, serum calcium levels remained within the normal reference range. In contrast, no significant increase was seen after the ingestion of calcium carbonate. There was no correlation between serum calcium change and vitamin D (calcifediol) in this study. No change in creatinine was observed. Similar findings are described in other studies, which have investigated the amount of calcium absorbed in bone meal products from fish, both in humans and animal models [9,13]. The positive impact of ingesting calcium derived from bone meal has received more research attention in the last decade. In clinical studies, natural hydroxyapatite appears to be more effective in building bone than traditional supplementation with calcium carbonate [14,15]. Bone meal also has a high collagen content, which appears to confer osteo-inductive properties, as indicated by several studies, both in-vitro and in-vivo [10].

The higher availability of serum calcium after intake of CalGo™ would suggest that this natural form of bone calcium is more easily absorbed by the gastrointestinal tract. As noted above, calcium levels remained within normal limits and no impact was seen on calcifediol levels. This lack of activation of a feedback mechanism used to control calcium uptake suggests that this increase in calcium is a positive outturn for the body. Therefore, CalGo™ looks to hold significant promise as a supplement for the treatment of postmenopausal osteoporosis. However, calcium metabolism is only one of many factors that need to be considered in treatment of osteoporosis. Numerous other factors influence the development of osteoporosis, including vit-D status, concomitant medication (for instance long-term treatment with corticosteroids), hormonal and nutritional factors [16]. There is a clear need to improve the current calcium supplementation strategies and deliver formats that supplement all the key elements of living bone: calcium hydroxyapatite, collagen and trace elements. Traditional supplementation with non-hydroxyapatite calcium salts has focused on delivering high levels of elemental calcium but this has resulted in a rather limited impact on bone density and strength. In summary, CalGo™ is derived from the off-cuts of salmon filet production thereby utilizing fish bones which would previously have been discarded as a waste product. This study builds further on the profile of this sustainable resource for the benefit of health. The findings in the present study suggest that bone meal from Norwegian Atlantic salmon is easily absorbed by the body and combined with previous data which indicated a potential to increase bone formation, CalGo™ looks to be a promising ingredient for supplementation to sustain bone health.

Healthy bone metabolism is a balance between bone formation and resorption. However, when resorption dominates progressive bone loss ensues. If this imbalance is not arrested, over time, osteopenia and finally osteoporosis will develop. This silent, ubiquitous process eventually leads to fragility fractures in the latter decades of life. Traditional calcium supplementation has clear limitations, driving the need for alternative calcium supplements to improve bone health. This study is a randomized, blinded, calcium-carbonate controlled cross-over study of serum calcium levels 24 h after CalGo™ (bone meal derived from Atlantic Salmon) oral supplementation in postmenopausal women. A significant increase in serum calcium levels were seen with CalGo™ compared to baseline values and as compared to calcium carbonate. All results remained within normal limits. No increases in serum levels of vitamin D or creatinine were observed with either supplement. We conclude that bone meal from Atlantic Salmon can offer an alternative for calcium supplementation.