Insight into Secondary Metabolites of Circinella, Mucor and Rhizopus the Three Musketeers of Order Mucorales

Circinella, Mucor and Rhizopus all these genera belonging to Order: Mucorales. This review is to demonstrate description, ecology, and secondary metabolites from Circinella, Mucor and Rhizopus and some of their reported biological activities. Besides, describing the importance and potentials of those fungi in order to encourage researchers for further studies to each genus metabolites and purify already known metabolites.

Fungi are rich sources of biologically active natural compounds, which are used in the manufacturing of wide range of clinically important drugs. Fungi produce important antibiotics such as the beta-lactam antibiotics members, penicillin and cephalosporin, which and their derivatives are dominating the most important antibiotic market until now [1-5]. Fungi generally and endophytic ones specifically represent future factories and potent biotechnological tools for production of bioactive natural substances which could extend healthy life span of humanity, as done by penicillin from centuries, and considered promising alternatives for some high costly produced chemicals and drugs [6- 12]. The present review highlights some bioactivity of secondary metabolites, produced by Circinella, Mucor, and Rhizopus, involved in medical, pharmaceutical, agricultural, and industrial applications. Zygomycetes constitute a remarkable group of microscopic fungi. These fungi are mainly soil inhabitants living as saprobes and decomposers of organic matter and herbivorous feces. Zygomycota, represent the most basal terrestrial phylum of the kingdom of Fungi [13].

Zygomycetes have an integral role in the development of microbial ecosystems, a property which has the potential to be converted for biotechnological and industrial applications ranging from food technology to drug development [14]. The Mucorales, which is classified into the subphylum Mucormycotina [15], is the largest order of fungi. Members of this group (Circinella, Mucor and Rhizopus) are abundant saprophytes in nature. They are commonly found in soil and decaying vegetation, and can also be found in grains [16,17]. Mucorales members (Example; Circinella, Mucor and Rhizopus) grow and invade quickly on easily digestible substrates, such as those containing starches, sugars, and hemicelluloses. Future studies should investigate Circinella, Mucor and Rhizopus their ability to produce extracellular enzymes and potential applications in biotechnology. 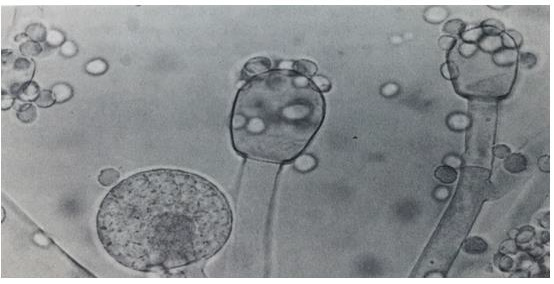 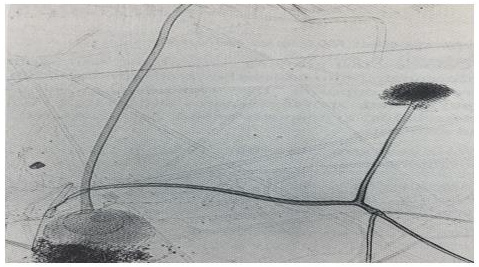 The Genus Circinella as a Biotransformation Agent

Enzymatic reactions and biotransformations catalyzed by fungal enzymes and used in industry, agriculture, food technology, and medicine have increased in importance tremendously in recent years. It was later demonstrated that filamentous fungi from several genera, including Circinella, Mucor and others, are able to hydroxylate dibenzofuran, forming 1-, 2-, 3-, or 4-hydroxybenzofuran and some other more hydrophilic products [18]. Yan et al., [19], mentioned that, nine hydroxylated and glycosylated metabolites, of which two have not been reported previously, were obtained and identified after incubation by Circinella muscae. The specific 7β, 15α, and 21β hydroxylated products yielded from this bio-process by Circinella muscae. In addition, the selectively glycosylation at C-28 was another main reaction type. It was also observed that the 3β-OH group was selectively dehydrogenated into carbonyl group. These reactions may be difficult to achieve by chemical synthetic means. In vitro biological tests indicated that compounds 3β, 7β dihydroxyolean-12-en-28-oic acid; 3β, 7β, 15α-trihydroxyolean- 12-en-28-oic acid, and 3β, 7β, 15α-trihydroxyolean-12-en- 28- oic acid-28-Oβ-D-glucopyranosyl ester showed significant antiinflammatory activities, which suggested that hydroxylation at C-7 and glycosylation at C-28 by Circinella muscae had benefit effects [19]. Macromycete Circinella muscae AS 3.2695, catalyzed the oxidation of Oleanolic Acid [20]. Biotransformation of ursolic acid by Circinella muscae CGMCC 3.2695 was investigated by Chu et al., [21].

Scaled-up biotransformation reactions yielded ten metabolites. Their structures were established based on extensive NMR and HR-ESI-MS data analyses, and four of them are new compounds. Circinella muscae could selectively catalyze hydroxylation, lactonisation, carbonylation and carboxyl reduction reactions. Also, all the identified metabolites were evaluated for their anti-neuroinflammatory activities in LPS-induced BV-2 cells. Most metabolites displayed significant inhibitory effect on nitric oxide (NO) production and the results suggested that biotransformed derivatives of ursolic acid might be served as potential neuroinflammatory inhibitors [21]. Biotransformation of betulinic acid was carried out with Circinella muscae CGMCC 3.2695 and Cunninghamella echinulata CGMCC 3.970 by Chen et al., [22], yielded six previously undescribed hydroxylated metabolites and four known compounds. Circinella muscae could catalyze the regioselecitve hydroxylation and carbonylation at C-3, C-7, C-15 and C-21 to yield seven products. Cunninghamella echinulata could catalyze the C-1, C-7 and C-26 regioselecitve hydroxylation and acetylation to yield five metabolites. The structures of the metabolites were established based on extensive NMR and HR-ESIMS data analyses and most of the metabolites exhibited significant inhibitory activities on lipopolysaccharides-induced NO production in RAW264.7 cells [22].

Species of Mucor ramosissimus produce extracellular enzymes, such as endopolygalacturonase and lipase, and secondary metabolites, such as phytoalexin elicitor [23,24]. Lately, several studies have focused on applying Mucorales members to produce ethanol and biomass by-product. Particularly, Mucor ramosissimus has been reported as a potential ethanol-producing mold [25]. Mucor circinelloides has a great industrial potential since it started producing bioactive compounds of interest, such as microbial lipids, carotenoids or sterols [26,27]. Mucor circinelloides is able to produce microbial lipids which could be useful for the production of biodiesel using the common way to produce fatty acid methyl esters, due to the beneficial properties of these compounds, new sustainable and more environmentally friendly methods have emerged in order to increase their production [28]. Three important strains of Mucor circinelloides grown in specific media for specified period (72 h, 120 h and 168 h) under submerged fermentation conditions were investigated by Hameed et al., [29], for their potential antioxidants/secondary metabolite production and found that all mycelial extracts demonstrated effective antioxidant activities in terms of β-carotene/linoleic acid bleaching, radical scavenging, reduction of metal ions and chelating abilities against ferrous ions [29].

Antioxidant property of all three important strains of Mucor circinelloides extracts were duo to their phenolic and condensed tannin contents. Strains Mucor circinelloides MC277.49 was found to be the biggest producer of secondary metabolites under nutritional stress condition in late exponential phase. These Mucor strains prove to be rich sources of antioxidants and secondary metabolites, which could be used in the development of nutraceuticals and natural antioxidants [29]. The new cyclic heptapeptide unguisin F and the known congener unguisin E, were obtained from the endophytic fungus Mucor irregularis, isolated from the medicinal plant Moringa stenopetala, collected in Cameroon studied by [30]. The structure of the new compound was determined on the basis of one- and two-dimensional NMR spectroscopy as well as by high-resolution mass spectrometry. Heptapeptide unguisin F and congener unguisin E were evaluated for their antibacterial and antifungal potential, but failed to display significant activities [30]. Biotransformation is an important tool for the structural modification of organic compounds, especially natural products with complex structures, which are difficult to achieve using ordinary methods [31].

Mucor genus is widespread in nature and some species are used extensively in biotechnology for enzyme and useful compound production. Biotransformation can be used as a very convenient way of producing compounds, particularly when the structure is complex and they can neither be isolated as metabolites nor chemically synthesized [31]. It is safe to conclude that biotransformation by Mucor species is of great importance due to their wide-ranging use in the stereospecific production of compounds of commercial interest, and because they simplify the study of the metabolism of such compounds in order to obtain novel agents with many interesting biological activities [31]. The biotransformation of 1R-(−)-camphorquinone, achieved by growing cells of Mucor plumbeus isolated from soil. Results were found for M. plumbeus, which was only able to perform monoreduction of camphorquinone when cultivated on a glucose– peptone–yeast extract medium. Large-scale experiments were set up and the camphorquinone biotransformation products formed by Mucor plumbeus were purified by column chromatography and identified by 1H and 13C nuclear magnetic resonance (NMR). Mucor plumbeus could be of great use for the selective reduction of camphorquinone and related compounds [32].

Secondary metabolites is one of the characteristic features of microorganisms. More than 50,000 bioactive compounds have been isolated from the extracts of microorganisms with a diversified arrangement of chemical structures, which showed antimicrobial, antitumor and agrochemical activity and others [33]. The ethyl acetate extract of Rhizopus stolonifer has potent cytotoxic activity against brine shrimps, suggesting that it could serve as a lead compound for anticancer compounds. Its antifungal activity also indicates its potential for development into an antifungal product. Furthermore, its phytotoxicity against Lemna minor weed demonstrates that it contains compounds with herbicidal activity. More studies on Rhizopus stolonifer is needed to isolate and structural characterization of its constituents which could lead to the development of pharmaceutical and agricultural products [34].

From previous studies, it was concluded that the extracts of Rhizopus species have compounds which have ability to inhibit the growth of fungal and bacterial strains [35]. Chitosan was isolated from the fungus Rhizopus oryzae by using yeast peptone glucose broth medium, showed antimicrobial activity against Escherichia coli, Staphylococcus aureus and Candida albicans and reach to 20, 15 and n 15 mm as inhibition zone respectively [36]. Nanotechnology is a field that is increasing day by day, making an impact in all spheres of human life. Biological methods of synthesis nanoparticles called “greener synthesis” of nanoparticles and these have proven to be better methods due to slower kinetics, they offer better manipulation and control over crystal growth and their stabilization [37]. The extracellular synthesis of silver nanoparticles by Rhizopus stolonifer and its efficacy against multidrug resistant (MDR) strains isolated from burnt cases from hospitals at Gulbarga region, Karnataka, India is reported by Rathod and Ranganath, [38], the biosynthesized nanosilver showed excellent antibacterial activity against multidrug resistant Pseudomonas aeruginosa isolated from burnt infections. Biologically synthesized nanosilver showed zone of inhibition (mm) of two isolates about 33mm and 30.5mm in diameter strains of Pseudomonas aeruginosa respectively [38].

This study reports the extracellular synthesis of silver nanoparticles by Rhizopus stolonifer and its efficacy against multidrug resistant (MDR) Escherichia coli and Staphylococcus aureus isolated from Khwaja Bande Nawas Hospital, Gulbarga, Karnataka was carried by Banu and Rathod, [39] and synthesis of silver nanoparticles (AgNPs) was carried out by using fungal filtrate of Rhizopus stolonifer and an aqueous solution of AgNO3. Biotransformations of sesquiterpenoids by Rhizopus species have been used to provide new derivatives with potential biological activities. Fungal transformation processes by Rhizopus species, has been the introduction of hydroxyl groups into remote positions of the molecules, which is difficult to achieve by chemical means. Other reactions carried out with stereo-selectivity by these microorganisms have been: epoxidations of double bonds, hydrogenations of the exocyclic C-C double bond of the lactone rings, and reductions of carbonyl groups giving Salcohols. Several reactions have also been performed by these Rhizopus species with regio-selectivity, such as oxidations of hydroxyl groups and deacetylations [40]. The enttrachyloban diterpene ent-18, 19-dihydroxytrachylobane was biotransformed by Rhizopus stolonifer, and produced the new ent- 11β, 18, 19-trihydroxytrachylobane, and the new ent-kaurene diterpenes ent-16α, 18, 19-trihydroxykaur-11-ene and ent- 18, 19-dihydroxy-16α-methoxykaur-11-ene. The formation of derivative ent-11β,18,19-trihydroxytrachylobane, involved the first hydroxylation of C-11 of ent-trachyloban diterpene skeleton by fungus, and compounds ent-kaurene diterpenes ent-16α, 18, 19-trihydroxykaur-11-ene and ent-18,19-dihydroxy-16α- methoxykaur-11-ene were probably produced by backbone rearrangement of ent-11β,18,19-trihydroxytrachylobane, these results, verified the potential application of microbial transformation (Especially By Mucorales Rhizopus species) of natural products for the formation of new compounds [41].

Fungi in general are important source of unique natural products with a high level of biodiversity and also yield several compounds having different industrial applications and pharmaceutical activities, which is currently attracting scientific researches. Every study conducted on Circinella, Mucor and Rhizopus resulted in discovery of new metabolites that may have an important applications, which made these genera potential source of pharmaceuticals and attracted attention for further investigations of their important bioactivities properties. Circinella, Mucor and Rhizopus are known for their capability of producing various bioactive compounds with medical applications as antineuroinflammatory, antiinflammatory, and enzymes producers and as biotransformation agents.

Insight into Secondary Metabolites of Circinella, Mucor and Rhizopus the Three Musketeers of Order Mucorales

Circinella, Mucor and Rhizopus all these genera belonging to Order: Mucorales. This review is to demonstrate description, ecology, and secondary metabolites from Circinella, Mucor and Rhizopus and some of their reported biological activities. Besides, describing the importance and potentials of those fungi in order to encourage researchers for further studies to each genus metabolites and purify already known metabolites.