A Rangaraj* and R Satyapal*

Chronic obstructive pulmonary disease (COPD) is a progressive inflammatory lung disease, which according to the World Health Organization is the third leading cause of death worldwide [1]. Common symptoms of COPD include dyspnea, cough and sputum production [2]. Multiple physiological mechanisms in COPD patients lead to them often having a reduced exercise tolerance. We aim to compare peak exercise tolerance of patients with moderate COPD against healthy individuals using Cardio-Pulmonary Exercise Testing (CPET). The purpose of our recommendations is to try and improve cardiopulmonary fitness of COPD patients with lifestyle and exercise interventions.

The study consisted of 8 COPD patients (8 male) and 8 healthy individuals (6 male, 2 female) as a control. All COPD patients had to have a Global Initiative for Chronic Obstructive Lung disease (GOLD) grade of 2B or worse. Exclusion criteria included <93% SpO2, other medical conditions or an exacerbation in the past 6 months. The control group had no health conditions.

Both groups completed the following exercise protocol on a cycle ergometer to exhaustion.

i. 3 minutes resting sat on the cycle.

The variables in Table 1 (excluding age, BMI, SpO2), VO2, end tidal CO2 (PETCO2) and VE/VCO2 were measured during exercise with recordings at Anaerobic Threshold (AT) and Peak exercise. AT was measured at the point VCO2 starts increasing at a greater rate than VO2. Peak exercise was determined when the work-rate curve was at its highest. Maximal effort was regarded as reached when either Respiratory exchange ratio (RER) > 1.15 or maximal HR > 85% predicted (220 – age). 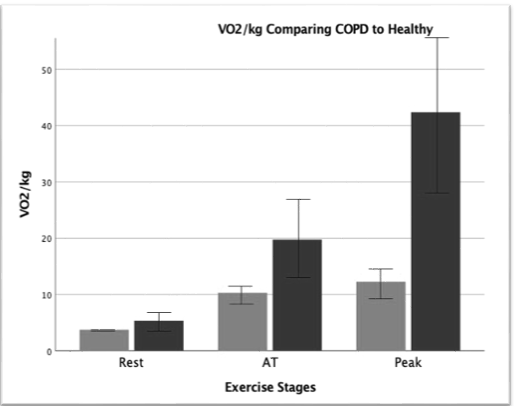 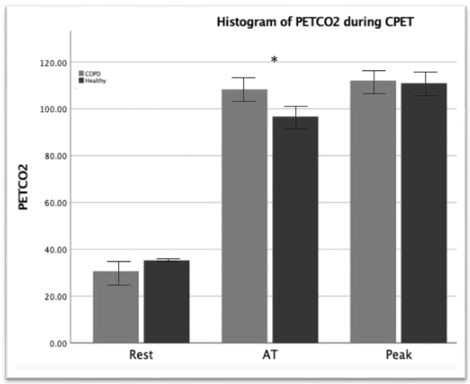 The inability of the COPD group to reach maximal effort is likely due to ventilatory limitations making it difficult to facilitate high gas exchange. This is also one of the mechanisms causing exertional dyspnea [3]. The lower RER and HR values in COPD patients suggest a high level of exercise intensity was not achieved [3]. Another reason it can be difficult for COPD patients to reach higher exercise intensities is that the disease causes hypoxic conditions in cells inducing reactive oxygen species production. This results in upregulation of inflammatory mediators responsible for muscle degeneration. The reduced skeletal muscle mass makes intensiveexercise difficult to maintain [4].COPD patients have an increased risk of coronary artery disease; a reduced left ventricular end-diastolic volume, stroke volume and cardiac output. Additionally, inflammation and damage to the pulmonary vasculature as well as reduced muscle mass all contribute to a low VO2 [4]. Increased amounts of CO2 are produced at higher exercise intensities due to increased anaerobic metabolism and buffering.

Ventilatory limitations seen with reduced Peak VT, VE and RR suggest reduced respiratory flow in COPD. This along with increased dead space and small airway inflammation make it harder to expel CO2 from the system [4]. The limit in respiratory mechanics results in difficulty performing exercise at higher intensities For longer. VE/ VCO2 is a measure of the ventilatory need to expel a certain amount of CO2 which has been produced due to activity. Higher peak VE/ VCO2 suggests ventilatory inefficiency, caused by lung damage in the form of bronchitis and emphysema likely to be present in more severe COPD [4]. Exercise induced secondary hypoventilation which occurs in COPD patients often results in a raised VE/VCO2. This reflects the presence of an elevated dead space volume/tidal volume ratio [4]. COPD patients need a higher minute ventilation to expel the same amount of CO2 as the healthy population. The VE/ VCO2 slope from a patient’s CPET is an indication of the severity of their COPD [3].

Interestingly the PETCO2 for the Healthy group increases after AT, following the COPD trend rather than falling which we would expect. Possibly due to random error or lower exercise intensity. The increase in PETCO2 after AT highlights ventilatory-perfusion (V/Q) limitations as you would expect PETCO2 to drop after the respiratory compensation point and VE increases in a healthy population [3]. The V/Q mismatch can also lead to hypoxia which can be partially seen with the lower resting SpO2 [5]. A limitation of this study is the differing ages and sexes of the two groups.

Several physiological mechanisms prevent COPD patients from exerting themselves during exercise as can be seen from CPET results. Recommendations to improve quality of life for COPD sufferers include smoking cessation, pharmacological therapy, pulmonary rehabilitation, education and nutritional support.

An individualised pulmonary rehabilitation plan emphasising exercise, education and behavioral change is recommended for COPD patients. The aim is to improve quality of life, reduce dyspnoea and enhance physical performance. High intensity interval training combined with strength training of major muscle groups is advised as it is less likely to cause pulmonary hyperinflation and dyspnoea. Patients should be educated to encourage smoking cessation and adhere to medication such as inhalers when appropriate [6]. Nutritional supplementation with omega-3 to reduce inflammation and essential amino acids to increase muscle strength would be beneficial. In malnourished COPD patients’ high fat supplements may be preferred over high carbohydrate supplements because of reduced CO2 production [7].

A Rangaraj* and R Satyapal*