Solid Organ Transplantation: A Glimpse into its History

On the Basis of the Definition

According to the dictionary of the Royal Spanish Academy [1], transplanting consists of “transferring a living organ or tissue from a donor organism to a recipient organism”. For its part, the dictionary of medical terms of the Royal Academy of Medicine of Spain [2], includes a broader definition of the term transplant: “to transfer an organ or tissue from one place to another in the same individual, between individuals of the same species or between individuals of different species”, adding to the concept the possibilities in terms of types of donors and possible recipients. The term “transplantation” comes from Latin, as the sum of “trans” (beyond) + “plant(āre)” (i.e. to plant) and literally means “change of location of a plant”. The surgical use of this term has been documented in English since 1951 [2] and refers to the “operation of transplanting into a recipient organism an organ or tissue taken from a donor organism. A distinction is made between autologous transplantation, isotransplantation, allotransplantation and heterotransplantation according to whether the donor and recipient organisms are identical, univitelline twins, members of the same species or members of different species, respectively”.

Although there are references to transplantation techniques dating back to antiquity, such as the legend of Saints Cosmas and Damian [3], which describes how these twin brothers amputate the leg of a deacon with a tumour (in some versions they say he had severe ischaemia) and then transplant the leg of a recently buried Ethiopian; the real breakthrough in solid organ transplantation is considered to have come at the beginning of the 20th century. This era was marked by several milestones, including the following: the refinement of the vascular anastomosis technique by Alexis Carrel [4] (who received the Nobel Prize in Physiology or Medicine in 1912), Charles Claude Guthrie, Mathieu Jaboulay and Julius Dorfler; the refinement of organ transplantation techniques in animals by Emerich Ullmann in 1902, with a kidney transplant between dogs, and the techniques described by Vladimir P Demikhov [5] between the 1930s and 1950s, which laid the foundations for surgical techniques used in humans; within the field of Immunology, the scientific breakthrough of the 20th century was the discovery of acquired immune tolerance by Peter Brian Medawar and Frank Macfarlane Burnet (who received the Nobel Prize in Physiology and Medicine in 1960) [6,7]; this was accompanied by the discovery of drugs with immunosuppressive properties_ especially from the 1960s [8,9] .

First Solid Organ Transplant in Humans in the World

Renal Transplantation: The first human kidney transplant in history took place in 1933 and was performed by the Ukrainian surgeon Voronoy [10]. The recipient was a young woman in a uraemic coma and the donor was a 60-year-old man; although the patient survived the surgery, the transplanted kidneys failed to function properly and on the third day the patient died. Voronoy performed five more cadaver kidney transplants in 1949, again without success. It was not until 23 December 1954 that Joseph Murray succeeded for the first time in performing a successful kidney transplant in humans at the Peter Bent Brighan Hospital in Boston. In this case, the donor and recipient were univitelline twins [11,12]. Murray received the Nobel Prize in Physiology and Medicine in 1990 for performing the first successful human organ transplantation. In the following years, kidney transplantation between twins continued to be performed, with subsequent good progress. At the same time, discoveries in the field of immunology and the development of immunosuppressive drugs made it possible to consider organ transplantation between immunologically nonidentical people.

Liver Transplantation: The first liver transplant was performed on 1 March 1963, at the Veteran’s Hospital in Denver (Colorado) by Thomas Starzl’s team. The recipient was a 3-year-old boy with biliary atresia, who died within hours of the transplant. Two months later, the same team performed another liver transplant on a 48-year-old man with liver cancer, who was implanted with the organ of a patient who had died of a brain tumour; this time, despite achieving adequate liver function, the recipient survived for 22 days, dying after suffering a pulmonary embolism. Like other types of solid organ transplantation, it was not until the 1980s that there was an improvement in the results of liver transplantation in relation to major advances in surgical techniques, coagulation management and the discovery of immunosuppressive drugs [13].

Heart Transplantation: The first human heart transplant was performed by Christiaan Neethling Barnard on 3 December 1967 in Cape Town, South Africa [14] on a 58-year-old recipient suffering from terminal heart failure, who died 18 days later, from Pseudomonas pneumonia. The results of the first interventions of this transplantation modality were disappointing. The explanation, again, lay in immunological problems that increased the risk of rejection and infection in recipients. As previously mentioned, the change came about after the introduction of new immunosuppressive drugs. In particular, in the case of heart transplantation, the advent of cyclosporine [15] led to a marked increase in post-transplant survival.

Lung transplantation: On 11 June 1963, James D. Hardy performed the first-ever lung transplant in a human in Jackson, Mississippi. The recipient was a 58-year-old man diagnosed with lung cancer who was in respiratory failure and also suffered from kidney failure. The circumstances of the recipient, John Russel, made this milestone even more unique as he was on death row for committing a murder in 1957. During his stay in prison, after being diagnosed with the oncological disease, the seriousness of the situation was explained to him and he was offered the chance to be the first human to undergo a lung transplant, promising, if he survived the transplant, to commute his prison sentence to the governor of the state for ‘contribution to the cause of humanity’. Russell agreed and the left lung was transplanted. However, after surviving for eighteen days with good function; he died as a result of worsening kidney failure [16]. Despite several subsequent attempts, it was not until the 1980s that good survival results were achieved in this type of solid organ transplantation, with the team at the University of Toronto and its lung transplant programme being the reference [17] (Figure 1). 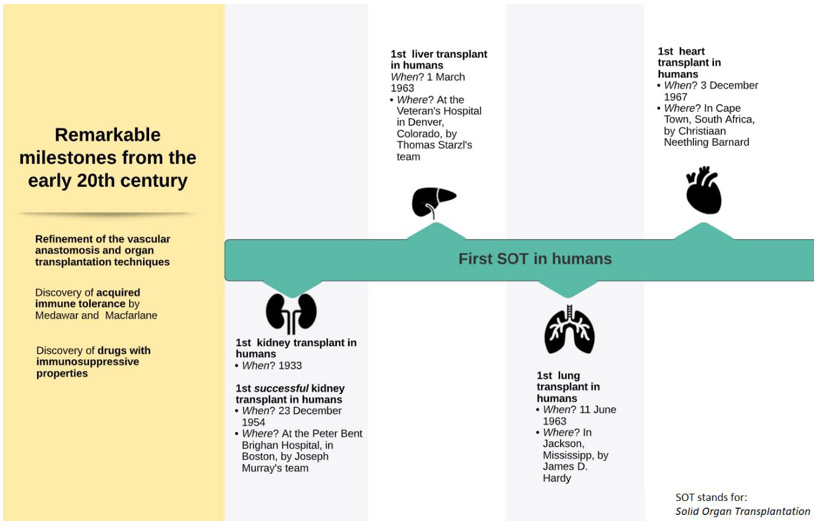 The Particular Case of Spain and Solid Organ Transplantation

The first transplant in Spain took place in 1965 at the Hospital Clinic i Provincial de Barcelona, where a cadaveric kidney transplant was performed by the Gil-Vernet team [18]. Almost two decades would have to pass before the first transplants of the other modalities were performed. The new heyday of solid organ transplants began again in the 1980s. Thus, it was not until 23 February 1984 that the first liver transplant was performed by Carles Margarit and Eduardo Jaurrieta at the University Hospital of Bellvitge (Barcelona) on a patient diagnosed with a liver tumour [19]. The first successful heart transplant in Spain was performed on 8 May 1984 at the Hospital de la Santa Creu i Sant Pau (Barcelona) by the team led by Josep María Caralps and Josep Oriol Bonín. The latest date in Spain corresponds to the first onelung transplant, performed in 1990 by Ramón Arcas at the Hospital Gregorio Marañón (Madrid) [20].

Within the history of transplantation in Spain, there are a number of notable years: In 1979, Law 30/1979 on Organ Transplantation was passed [24], which legally recognised the concept of “brain death”. Until then, in order to proceed with the extraction of an organ for transplantation (until that date it was always the kidney), the donor had to wait for asystole. After this law and its implementation by Royal Decree in 1980 [25], there was an increase in the total number of transplants carried out in Spain. Another important year was 1989, when the National Transplant Organisation (ONT), officially created in June 1980 by Resolution of the Secretary of State for Health [26], acquired a physical organisation that facilitated the achievement of its goals. The ONT was defined as a coordinating body of a technical nature, belonging to the Ministry of Health, responsible for developing the functions related to the procurement and clinical use of organs, tissues and cells. It is structured as a network, for the organisation of which three levels are established: National Coordination, Autonomous Community Coordination and Hospital Coordination. The so-called “Spanish model” [27] of transplantation and its organisational structure showed good early results, making Spain the leading country in the world in terms of the number of donations.

The possibility of performing solid organ transplants has meant a significant change in the lives of many people in recent decades. The great advances made in the 20th century in the field of surgery made it possible to consider this type of treatment in humans for the first time. Although initially the results in terms of survival were not favourable, the discovery of the immunological mechanisms that produced rejection, along with the knowledge of the human leukocyte antigen (HLA) system, and the subsequent appearance of immunosuppressive drugs, led to a change in the paradigm of the management of transplant recipients. Today, solid organ transplantation is a particularly relevant therapeutic option for people with diseases previously considered terminal due to severe dysfunction of one or more organs who are candidates for inclusion on the waiting list to receive a graft, since after transplantation, the recipient’s quality of life is often improved, and survival is increased.

Solid Organ Transplantation: A Glimpse into its History