Van Lohuizen Syndrome, A Late-Diagnosed Case in an 18 Years-Old Female

Cutis Marmorata Telangiectatica Congenita is a very rare birth defect involving cutaneous blood vessels. Of unknown cause, uncertain pathophysiology, unclear epidemiology. Described as a localized, or generalized marbled skin appearance (cutis marmarota), in addition to the skin, it may involve any other body organs, with, or without a wide variety of associated congenital anomalies. Kato van Lohuizen described the first case in 1922. Since then, there have been less than 300 cases reported worldwide to date. We are adding one more case, and the first reported in Libya.

Van Lohuizen Syndrome, or Cutis Marmorata Telangiectatica Congenita. Is a very rare birth defect involving the cutaneous blood vessels, often reported as a benign, congenital disorder of unknown etiology, epidemiology, and pathophysiology. Described as persistent cutaneous telangiectasia, and phlebectasia, these appear as reticulated streaks of the skin capillaries and venules, resulting in a marbled-looking skin (cutis marmarota) [1-3]. First described by Kato van Lohuizen, a female Dutch pediatrician, in 1922 [4]. Since then, it has been referred to under several names, including, congenital generalized phlebectasia, [5,6] naevus vascularis reticularis, [7] as well as congenital livedo reticularis [8]. Characterized by the presence of erythematous network streaks, without venectasia, which is not responding to local heating. It may occur along with port-wine stain, [9] cutaneous ulceration, and atrophy within the affected area, as well as body asymmetry, and may affect any organ, including the eyes, skeleton, kidneys, and the brain [10-12].

We are reporting the first case of CMTC in Libya, in 18 years old girl referred to our clinic for consultation. She had persistent skin disorders in her Rt. upper limb since birth (Figure 1). She is the third of three siblings, born as a full-term baby, by uncomplicated vaginal delivery, to a non-consanguineous marriage, and there was no family history of similar lesions. A high school student, leading a normal active life, until about a year ago, when she began to feel intermittently some discomfort and numbness of the right hand and forearm, with no history of trauma. Her upper extremity skin changes were detected at birth along with contralateral DDH, which was treated conservatively. Our clinical findings revealed a network of blue-purple lines giving the skin a marbled appearance along the right upper extremity from the deltoid insertion to the metacarpophalangeal joints level dorsally, sparing the Palmer skin, otherwise, her skin temperature and texture were normal, without atrophy or ulceration (Figure 2). The lesions were fading at Direct pressure, but not affected by gravity. There were multiple irregularly shaped port-wine stain patches on the right anckle laterally, left leg posteriorly, and the right thigh anteromedially. No upper or lower limbs atrophy, cercomfrential, or length discrepancy, and her gait was normal, there was no scoliosis, or facial asymmetry. There were no sensory or motor deficits detected clinically. Here skeletal survey, abdominal and pelvic ultrasound, echocardiography, and all laboratory investigations were within normal. NCS, reported mild right CTS, Based on this medical history and clinical presentation, the diagnosis of Van Lohuizen syndrome was confirmed (Figure 3). 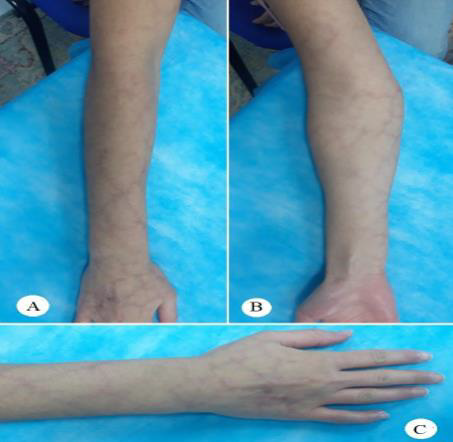 Figure 2: The lesion extends along the right upper limb, between the deltoid insertion proximally and the Metacarpophalangeal joints level distally, sparing the phalangeal skin dorsally and the palmar skin volarly.

Figure 3: Multiple erregularly shaped port-wine stain patches on he Anckle A, Leg B and Thigh C.

Van Lohuizen syndrome is a rare congenital disorder, with less than 300 cases reported worldwide to date [2,12,13]. However, since not all cases are diagnosed, it is difficult to determine incidence rates. Its origin and gender prevalence are still obscure and unclear, although, it is believed by some to be prevalent among females (64%) [14,15]. In some rare cases, CMTC may run in families [11]. However, Amitai et al. observed no familial cases of CMTC in their series, and most of the cases seem to be sporadic, with no racial predilection [16]. However, skin biopsies have revealed genetic mutations in GNA11, [17-20] and some researchers have also reported genetic mutations in ARL6IP6, suggesting its inheritance as a recessive trait [20-23]. Moreover, viral infections have been postulated, and the underlying connective tissue abnormality has been supposed. Its diagnosis is clinically based. It appears as cutaneous erythematous reticulum streaks, fading upon direct local pressure but unaffected by local heating or gravity, with no venectasia, findings that Kienast, [9] considered three of which as primary signs. While the presence of skin atrophy and ulceration, and the port-wine stains outside the areas affected by CMTC, have been considered a secondary diagnostic criterion (Table 1). For diagnosis, the presence of three major signs and two of the minor criteria is indicative [2].

In most cases (66.8%), the disorder is localized, and the leasions are unilateral in 65% of the cases, more frequently involving the limbs (69%), [16] where the upper limbs are affected in (25.9%), while the hands are involved in only (4.9%), but can be generalized in about (24.5%) of cases [24]. CMTC may involve any organ in the body, including the eyes, skeleton, brain, kidneys, and others [10]. The most frequently associated anomalies, in 18.8% of patients [16] include body asymmetry, neurological, ophthalmological, and cardiovascular defects, dysmorphic features, genitourinary, and endocrinological defects [2,16,24-29]. The CMTC should be distinguished from congenital livedo reticularis, which is caused by mosaic PIK3CA gene mutations, [30] where ulceration and phlebectasia do not occur, Sturge-Weber syndrome, which is caused by mosaic GNAQ gene mutations, [17] Neonatal lupus erythematosus, [31] and Klippel-Trenaunay syndrome.

Although, histopathology may confirm the diagnosis by showing an increased number and size of capillaries and veinules in the dermal layer, endothelial swelling, and sometimes aneurysms, it is not necessary, and nonspecific [16,32-35]. Imaging, and fluorescein angiography are indicated only for the evaluation of other congenital anomalies that may accompany the CMTC.

Up to the moment, there is no definitive treatment for skin symptoms in CMTC. However, sympathectomy, and laser therapy are postulated [14,32,34-38]. In our current case, we believe that treatment is unnecessary, apart from reassurance and may be a psychological support to ease the burden of the aesthetic appearance, for although the problem involves a wide area of about (9%) of the total body surface area (TBSA), [39] it is still localized, and it is without any other associated problem apart from the described port-wine patches. She is a tertiary school student, living a normal life with no functional or intellectual issues. However, if we consider her complaint of discomfort and numbness as part of the problem or some of its long-term sequels, [40] the clinical findings and investigation results do not suggest more than the need for follow-up. Although some authors, including Kienast, state that skin leasions typically become less and often completely disappear by adolescence, [3,4,16] this is not the case with our patient [12,41].

Van Lohuizen Syndrome, A Late-Diagnosed Case in an 18 Years-Old Female

Cutis Marmorata Telangiectatica Congenita is a very rare birth defect involving cutaneous blood vessels. Of unknown cause, uncertain pathophysiology, unclear epidemiology. Described as a localized, or generalized marbled skin appearance (cutis marmarota), in addition to the skin, it may involve any other body organs, with, or without a wide variety of associated congenital anomalies. Kato van Lohuizen described the first case in 1922. Since then, there have been less than 300 cases reported worldwide to date. We are adding one more case, and the first reported in Libya.