Reproductive problems have an essential effect on the productivity of dairy cows by reducing reproductive efficiency and shortening the length of productive life by increasing exclusion and reducing milk production [1]. There is a positive genetic relationship between reproductive problems in cows and the level of productivity and longevity. Thus, achieving maximum improvement Hereditary depends on the existence of an effective program to treat reproductive problems in the herd. Unlike this program, reproductive issues may lead to the loss of cows and increase the length of a generation, which leads to a decrease in the amount of genetic improvement achieved in a certain period [2]. The bovine placenta is classified as Cotyledonary Placenta and consists of Uterine Caruncles on the maternal and Fetal Cotyledons. From the side of the fetus and together, they form the placenames [3]. The primary function of the placenta is the exchange of nutrients from the mother with the excretory products of the developing fetus. In addition to that, it acts on the secretion of estrogen and several secondary steroids and their receptors [2].
The placenta or “fetal membrane” is a significant organ for nutritional and oxygen supply from the dam to the fetus in the uterine [3]. The placenta is complex hormones, and they begin to separate from the mother before birth and shortly after birth through a hormonal process. The exit of the placenta from the uterus (up to 12 hours) for any reason. This condition is called the retained placenta. Usually, part of the placenta is retained in the uterus, resulting in no estrus. In this case, the corpus luteum may be affected, and the mother will be calving stillbirth and secrete the hormone progesterone, which prevents the occurrence of estrus [2]. The causes of placental retention vary, including genetic and non-genetic. Also, among the reasons for placental retention is a lack of mineral salts, vitamin B, A, and selenium, as well as miscarriage [2,4] in addition to germs and diseases that result from these reasons, the shortage of the productive herd and the low productivity of the births and milk yield [5].
Twin births and prolonged pregnancy are also influences that cause placental retention (183 and disease problems that lead to retention of the placenta [6]. And since the future of the cattle herds depends mainly on choosing the right way to raise and raise wheels and strong-bodied cows to replace the excluded cows, this is one of the essential foundations. Because this reproductive problem represents a significant obstacle to most cattle breeding farms and due to the lack of studies in Yemen that have been subjected to placenta retention as a reproductive problem in dairy cows (Friesian) raised in Yemen, this study aimed to study placental retention in Friesian cows raised in Al-Bun farm in Amran governorate. It also aims to study the effect of some environmental factors on the occurrence of this reproductive problem.

The study was carried out on a herd of Friesian cows raised in the Al-Bun farm of the Agricultural Cooperative Union located in the bottom of Al-Bun, Amran Governorate, approximately 50 km (northwest of Sana’a). The farm was established in 1993 with 40 heads of cows obtained from the Rasbbah farm in Dhamar governorate and fifty heads. (50 from the Netherlands, and the number of the herd at the time of the study was 505 cows. Estrus is monitored and detected in the barns by veterinary monitors and workers on the farm during the day and night, and estrus is monitored in the farm. In the case of the detection of estrus, the cows are naturally inseminated in the barns. The first insemination process is carried out depending on age and weight, so they are vaccinated at the age of 18 months with a weight of not less than 400 kg. If the weight is less, the vaccination process is delayed until they reach the appropriate weight. There is a health and preventive program as all farm animals are vaccinated against FMD twice a year, and the cows are examined periodically for investigation. On brucellosis and weaning vaccinations against Brucella after weaning (the feeding program was discussed in the first part of the research).

According to a mathematical model, the birth records of 1008 observations of placental retention were analyzed using the General Linear Model method. The analysis was done on the basis that the studied trait is a binary trait (yes or no) according to [7] did and [8] according to the following model.
Yijklmn = μ + Ri + Sj + Tk + Vi + Xm + Zn + Yo + Eijklmn
• Yijklmn= The studied characteristic (placental retention rate), where they gave a symbol (0) for cows that did not experience placenta retention and a sign [9] for cows that were exposed to placental retention.
• μ=the general average of the studied trait.
• Ri=effect of parity of calving [9- 12,13,6,4,8,14].
• Si=effect of the season of calving (winter, spring, summer, autumn).
• Tk=the effect of the calving year, and it contained 11 years (from 1997 to 2007).
• Vi=the effect of the type of calving (single - twin).
• Xm= the influence of sex of calving (male-female).
• Zn= the effect of Dystocia (cows with calving dystocia – cows without calving dystocia).
• Yo= effect the stillbirth (cows whose births were stillbirth - cows that not still their births).
• Eijklmno= The effect of random error, which assumes an independent normal distribution with a mean of 0 e σ2.

Some of the Factors Affecting Placental Retention

The general mean ± standard error of placental retention was 20.63 ± 0.0121%. (Table 1), and that the increase in this rate on the farm reflects a defect in management. That placental retention is affected by nutritional factors [2], environmental, genetic, and physiological, and the effect of maternal births, abortions, and length of pregnancy [15]. 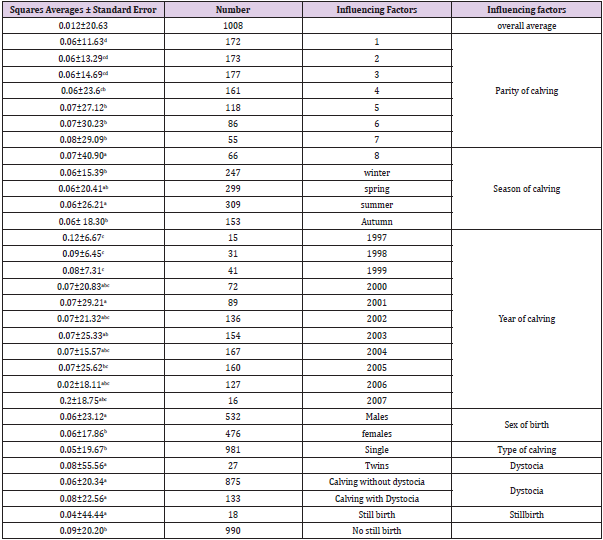 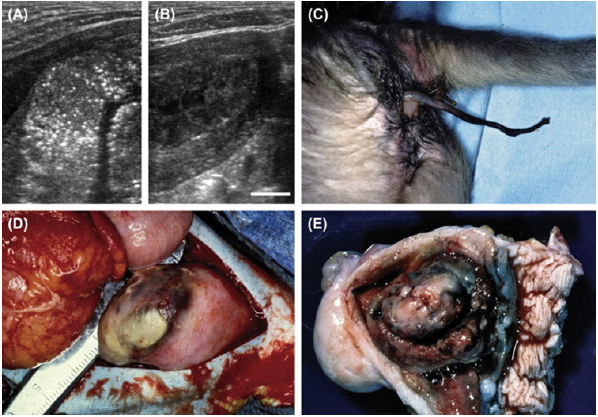 A significant effect (p<0.01) of the calving of the season was reported on the Incidence of placental retention, (Table 2), as the cows born in the summer season were more prone to placental retention (26.21%) compared to the cows bred in the winter season (15.39%). The seasonal variation is due to the difference in the degree of heat, humidity and its implications for the quantity and quality of feeds [16], as placental retention is affected by dietary factors such as a lack of mineral salts, vitamins E and B, selenium, and a deficiency of vitamin E in the feed (food), which is included in the composition of the epithelial layer of the placenta, which prevents Attachment of the placenta to the wall of the uterus during calving and prevention of retention [16].

The results of the current study show that there was a highly significant effect (P<0.01) for the calving year on placenta retention, (Table 2), which was above (29.21%) for lactating cows in 2001, while the lowest rate for placenta retention was (6.45%) for birthing cows in 1998. The significant effect of placental retention is the annual differences in temperature, humidity and amount of rainfall, and the change in management systems and the quantity and quality of available fodder (Figure 2). 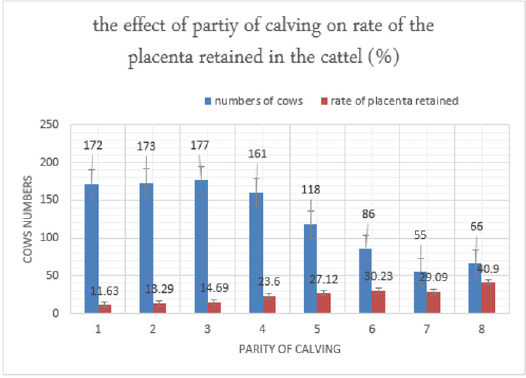 Figure 2: The effect of parity of calving on the rate of the retained placenta (%).

The results of the statistical analysis found that cows whose calving’s were males were significantly higher (p<0.01) in the rate of placenta retention (23.12%) compared to cows whose calving’s were females (17.86%). The significant effect can be attributed to most of the calving’s in which the type of the calvings was born. Males are greater in size than calving’s that were taken females, which leads to the occurrence of Dystocia and thus leads to retention of the placenta [16].

Although there was no significant effect (P <0.05) of Dystocia on placenta retention (Table 2), the results of the present study showed that the rate of placental retention in Dystocia is higher (22.56%) compared to the speed of retention of placenta among cows without Dystocia (20.34%).

The results of the statistical analysis of the current study found that stillbirth had a significant effect (P <0.05) on the rate of placental retention.

This research article was part of my master thesis study. My thanks to Professors Nadim.Koşum and M.A. AL-karmah for them guidance and review my research.

Hafsa wrote the manuscript. Both authors have read and approved the final manuscript.

The materials and laboratory equipment of this research was supported by department of animal production faculty of animal science Sana’a University.

Data sharing is not applicable to this article as no datasets were generated during the current study.