Comparison of the Reaction Time Between Motorcycle Road Racer and Motorcyclists

Motorbike speed is one of the most popular sports in the world, which requires excellent physical and mental performance from the racers. However, the importance of applying the Theory of Sports Training in the sport is little explored, especially in the amateur categories. The lack of information occurs due to the little involvement of Sports Medicine and Sports Sciences in the different categories of motorbike [1]. It is recognized that this sport is extremely challenging and dangerous [2,3]. The motorbike racers is exposed to extreme conditions and high physical demands, on the other hand, in motorsports, the victories depend, not only on the individual physical capacity of the athlete but on a set of factors, such as riding technique, mental effort, equipment efficiency and resistance, race strategy and team competence [4].
Even though physical fitness is not the main determinant for win in Motor Sports, it is still observed that training and racing require athletic skills and physical demands from the driver, similar to athletes in other sports [5]. In this sense, Ebben, et al. [6] point out that the aerobic resistance of racer drivers is similar to that of boxing, basketball, football, athletics, among others. Reaction Time (RT) is the time interval between the generation of visual, audible or tactile stimuli and motor action. This time revolves around values that correspond to milliseconds and depends on factors such as age, physical conditioning, cognitive level, emotional state and gender [7]. Although Reaction Time is related to genetic conditions, it is a sensory quality that can be trained. High-performance athletes can achieve a decrease of approximately 15% in reaction time due to years of training [8]. For the athlete to react to a stimulus, there is a latency period (just before muscle contraction begins), which is shorter or slower due to the quality of the processing of the reference by the central nervous system [7]. It is observed that the RT of elite athletes, is faster when compared to beginners or untrained [9].
According to Tønnessen, et al. [10], in a study comparing the reaction time of 1,319 world champions in the 100-meter dash category, it was observed that the RT of male athletes (0.166 ± 0.030 seconds) was significantly lower than that of female athletes (0.176 ± 0.034 seconds). There was no relationship between RT and height. The best RT was obtained in the age group between 26 and 29 years old in males (0.150 ± 0.017 seconds) and athletes over 30 years old (0.153 ± 0.020 seconds). According to Sparrow, et al. [11], the type of training, testing and the modality practiced by the athlete can influence RT. Gélat, et al. [12] point out that the emotional and attention state interferes with RT, which can be faster, in motivating conditions and/or when the individual remains more attentive and slower, in situations of demotivation or depression. The neurosensory response is extremely important for Motor Sports racers, such as motorcycle race. Being that during races the racers receives different visual, auditory, tactile stimuli and the respective reception, transfer, processing and transfer of this information, in the shortest possible time, are essential for the performance during the competitions.

To compare reaction time of Track Day racers with motorcyclists.

The accessibility sample consisted of 10 volunteers, who were divided into two groups with five individuals each: G1) Amateur Track Day racers 29.4 + 2.6 years old and G2) Motorcyclists, without experience in motorcycle competitions, with an average age of 22 + 1.4 years.

Any type of injury that makes bodily movements impossible. Consumption of substances with caffeine two hours from the tests. Do not accept to participate in the research.

The research project was submitted to and approved by the Research Ethics Committee of the School of Physical Education of Jundiaí (Jundiaí, São Paulo/Brazil) Protocol Number 3.401.727 and all volunteers signed the IC to participate in the study.

To evaluate the Reaction Time, FITLIGHT® system was used, a device that allows the random activation of up to eight LEDs, wirelessly, according to the programming of the respective lighting time and activation time determined by the researcher, with the registration of the number of hits and reaction time in milliseconds. The equipment allows identifying, besides the Reaction Time, other variables such as several correct answers in the tasks as well as the total activity time. The equipment’s different schedules have the potential to quantify Reaction Time, as well as to develop specific exercises or activities that simulate real movements during the specific movement of various sports.
The study volunteers underwent two tests performed sequentially to identify the Reaction Time: T1) specific test performed on a Honda CBR 600cc motorcycle, supported on a specific easel, where each rider and motorcyclist remained in the riding position responding to luminous signs of the LEDs that were positioned laterally (left and right side) at the height of the volunteer’s eyes and two others on the ground beside the front tire, during the test the objective of turning the handlebar left or right or directing the left hand or right as the LEDs are being turned on randomly; T2) non-specific test, with the led’s positioned in front of each individual on a bench, the objective being to direct the right or left hand to each random lighting of the led for the respective Reaction Time record. In the two tests, the respective positions of the subjects were standardized. Each test has a total of 30 random LEDs, with an estimated time to complete each task of around thirty-five seconds. The variables obtained in each task were: average Reaction Time (in milliseconds), the number of hits and errors, that is, if the volunteer was able to respond to the stimulus in the time that the LEDs remained on (0.500 ms), as well as the total test run time.

For comparison between moments, Student’s t-test paired for variables with normal distribution was used, with Bonferroni’s post-test adopting a 5% significance level for all analyzes. Using the Graph Pad software. The data were also presented descriptively in graphical and tabular form. 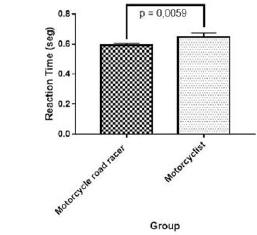 Figure 1: Comparison of Reaction Time in the specific test. 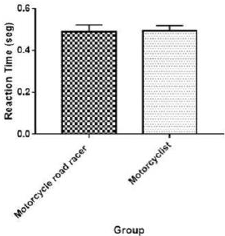 Figure 2: Comparison of Reaction Time in the general test.

Graphs 1-6 show the results obtained in the present study. It can be seen that in the specific test the Track Day racers performed better than the motorcyclists concerning the following variables: reaction time, number of hits and total time to perform the task. However, in test 2 considered as a non-specific evaluation of the TR, there was no statistical difference in the variables studied, except in the total time to perform the task, which was significantly less in favor of the Track Day racers (Graphs 1-6). 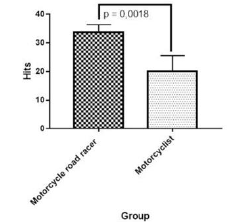 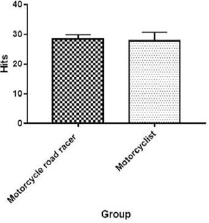 Figure 4: Comparison of the number of hits in the general test. 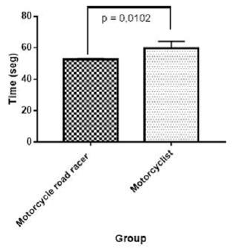 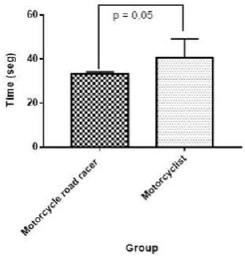 The identification of the reaction time levels of a sports modality must follow its characteristics and physiological influences in its execution. For Backman, et al. [13], in Motor Sports, the effect of driving the vehicle on the locomotor system and the muscular effort in its entirety during practice should be considered. In this sense, it can be inferred that in the motorbike the dynamic component of the modality is characterized by the great demand for body displacement during the practice, that is, use of the muscles of the trunk, abdomen and upper limbs for driving, acceleration, clutch control and motorcycle braking and use of the lower limbs together with the pelvic girdle muscles for positioning in curves, braking and downshifting. The static component is also observed, concerning the core and shoulder girdle muscles, and the modality is considered to have a vigorous level of physical effort, due to the high level of dehydration, above-average heart rate and high probability of falling and risk of collisions. In this sense, familiarity with the equipment during the specific test may be one of the reasons for the better performance of the racers compared to motorcyclists. However, Track Day racers did not train Reaction Time in their weekly exercise routine. Inferring that the best results obtained in the specific test are related to the practice of the sport, according to the principle of specificity [14].
Remaud, et al. [15] highlighted the demands for attention associated with postural control during Reaction Time and considered that both the focus of attention and the difficulty of a postural task are potential factors that influence RT. The authors evaluated thirteen young people in two tests that consisted of being as quiet as possible on a force platform in different postural conditions, while simultaneously performing a simple TR task. The difficulty of the postural task was handled by various combinations of three support bases (feet together, apart and single leg) and two visual conditions (eyes open and closed). Participants were instructed to focus on balance or performance on RT, depending on the test session. Participants responded more quickly in all dualtask conditions by focusing on TR performance than on balance. The modified attention allocation index indicated that the participants’ ability to modulate their allocation of attentional resources to respond positively to instruction was more pronounced in the most challenging postural condition. This can explain in our study, the better performance of Track Day racers in the task performed in the riding position and on a motorcycle of a similar model to the one that is usually used in their routines.
These results indicate that Track Day racers concerning the reactions on the motorcycle stand out from the racers, as expected due to the experience on the tracks and familiarity with the model of the motorcycle that was used as a reference for carrying out the tests. A similar result was observed in the study by Van Leeween, et al. [16], where racers drivers were better in all measures of reaction time compared to drivers. On the other hand, in the nonspecific test, the performance of the two groups of motorcyclists was equivalent, but with a noticeable difference in terms of the test execution time.

For a motorcyclist to participate in the Track Day, the racers don’t need to have experience in racing tracks and/or to have taken a Riding Course and a motorcycle-specific preparation for competitions is also not necessary. Due to these facilities, many motorcyclists, even without the proper preparation to enter a racetrack, are attracted to participate in these races, in some cases with rented competition motorcycles. Our data showed that, for example, the Reaction Time of racers experienced in this type of event is higher than that of motorcyclists who, although experienced, never participated in Track Day. In this sense, the results of this study indicate that it is not enough for the rider alone have experience of daily use of motorcycles in traffic, as the specificity of the riding position seems to significantly interfere in the Reaction Time test. In this sense, it is suggested that motorcyclists who have never participated in Track Day should take courses and training before starting the practice. On the other hand, we suggest that the specific test protocol used in the present study to evaluate the Reaction Time can be used for the evaluation and/or training of motorbike racers.

It was observed that the Track Day racers presented the best reaction time, number of hits and time of execution of the task than the racers in the specific test. However, in the non-specific reaction time test, there was no significant difference between the volunteers studied, except in the time of the test, where the Track Day racers were faster. These data contribute to reinforce the importance of specificity in motorsports and to the establishment of benchmarks concerning the reaction time of motorbike racers.