Gaseous signal molecules, such as nitric oxide (NO), carbonic oxide (CO), and hydrogen sulfide (H2S), widely exist in most tissues of the body, and exert important physiological functions. These molecules are endogenously synthesized and catabolized, can freely diffuse across the plasma membrane and regulate certain biological processes at physiological concentrations. H2S is the latest discovered among the above three gaseous signal molecules. Endogenous H2S is produced by the catalytic synthesis of L-cysteine hydrochloride by cystathionine beta synthase (CBS) or cystathionine gamma lyase (CSE). CBS and CSE belong to pyridoxal 5’-phosphate dependent enzymes, with differences in tissue distribution. CBS mainly distributes in the brain, especially in hippocampus and cerebellum. The H2S concentration in rat serum was about 46μmol/L and was 50-160μmol/L in rat brain tissues. In vivo, endogenous H2S mainly exists in two forms, i.e., free gas (about 1/3) and sodium hydrosulfide (NaHS) (about 2/3). The two forms keep a dynamic equilibrium. As a H2S donor, NaHS mainly exists in peripheral tissues, and maintains the stabilities of free H2S level and pH in vivo. Studies on endogenous NO and CO have demonstrated that both of them play important roles in the regulation of circadian rhythm in organisms. It has also been proved that H2S can change the expression patterns of clock genes such as Clock, Per2, Bmal1, and Rev-erbα by influencing the content ratio of NAD/NADH and the expression of Sirt1 in mice hepatocytes [1]. However, it is still unclear whether H2S regulate the central circadian clock In vivo. The present study aimed to test the hypothesis that H2S plays an important role in the regulation of central circadian clock located in the suprachiasmatic nucleus (SCN) by affecting the expression patterns of clock genes and clock-controlled genes. 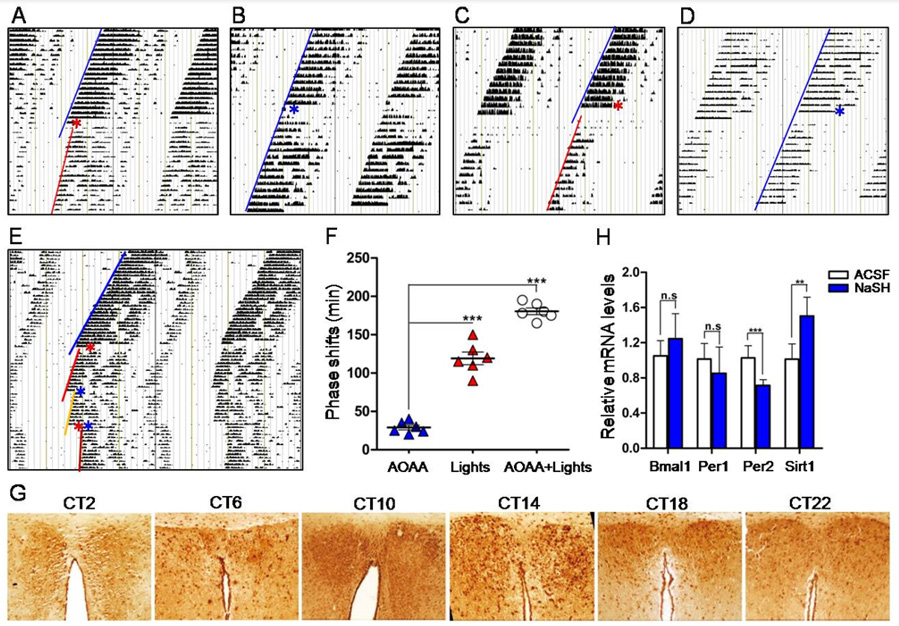 After wheel running experiments, animals were decapitated under dim red light (4 lux), and SCN tissues were immediately harvested, liquid nitrogen frozen and total RNA were extracted as we previously reported [2]. Transcriptions of circadian genes, including Bmal1, Per1, Per2 and Sirt1, were examined by realtime quantitative PCR (RT-qPCR). Some SCN tissues were routinely developed, sectioned, and the protein expression of CBS was visualized by immunohistochemistry. Data were expressed as mean ± standard deviation (SD). Student’s t test or analysis of variance was used to perform the statistics where necessary. The criterion for statistical significance was P < 0.05. Animal use protocol was in compliance with the guidelines for the Care and Use of Laboratory Animals (NIH, revised 2011). Results showed that bolus i.c.v. injection of NaHS at CT14 (early subjective night) induced significant phase delay of the circadian locomotor rhythm in mice by about 50 ± 8 min, and also obviously prolonged the circadian period length from 23.8h to 24.3h (Figure 1A), compared with the control ACSF injection at CT14 (Figure 1B). Bolus NaHS (i.c.v.) at CT20 (late subjective night) also caused a phase delay of 30 ± 10min (Figure 1C) and a prolongation of period length from 23.8h to 24h, compared with control ACSF injection at CT20 (Figure 1D). Above results showed that NaHS (H2S donor) i.c.v. injection induced phase delay and prolongation of circadian period length, suggesting that H2S could slow down the running of central circadian clock. We thus proposed that suppression of H2S production by inhibiting CBS would lead to opposite changes of phase and period length. However, to our surprise, i.c.v. injection of AOAA at CT14 produced almost the same results as that induced by NaHS, i.e., phase delay (30 ± 10 min) and period length prolongation, but the extents of phase shift and period prolongation were obviously less than that induced by NaHS (Figures 1E & 1F).

To check whether NaHS i.c.v. injection would affect the light entrainment function of SCN, twelve days after bolus NaHS i.c.v. injection, we gave the mice a short-time (15min) light exposure at CT15. Results showed that short light exposure induced significant phase delay by about 120 ± 20min (Figures 1E & 1F). This result indicates that the SCN responded well to light signal and was not damaged by NaHS i.c.v. injection. A combination of AOAA at CT14 and light exposure (CT15) led to further phase delay (180 ± 15min) and prolongation of circadian period length (Figures 1E & 1F). As CBS is a H2S synthetase, and H2S donor NaHS affected the circadian rhythm as we observed, we thus examined whether CBS expression would show circadian rhythm, and whether inhibition of CBS would affect the expression of clock genes and clock-controlled gene Sirt1, in the SCN of mice. We detected the expression of CBS over 24 hours in mice SCN tissues by immunohistochemistry. SCN tissues were obtained at CT2, CT6, CT10, CT14, CT18 and CT22. CSB protein expression levels showed a robust circadian pattern with a cycle of nearly 24 hours (Figure 1G). The expression peak appeared at CT14, and the trough showed at CT2 (Figure 1G).

Because NaHS induced phase delay and period length prolongation as shown above, it is possible that NaHS may change the transcription of clock genes and clock-controlled gene Sirt1. We checked the mRNA levels of Bmal1, Per1, Per2 and Sirt1 before and 15min after NaHS i.c.v. injection at CT14 by qRT-PCR. Results showed NaHS significantly decreased the mRNA levels of Per2 by 0.69-fold but increased the mRNA level of Sirt1 by 1.5-fold, while NaHS did not affect the mRNA levels of Per1 and Bmal1 (Figure 1H). To clarify the major findings of the present study, bolus i.c.v. injections of NaHS at CT14 and CT20, a way thought to increase the H2S level in the SCN, induced phase delay and period length prolongation of mice free-running locomotor rhythms; deactivating CBS by AOAA to reduce the H2S level in the SCN exerted similar result as NaHS did; the used dosage of NaHS did not damage the light entrainment function of SCN; CBS expression in the SCN showed a pattern of circadian rhythm; NaHS i.c.v. injection at CT14 increased the protein expression of CBS and the transcription of Sirt1, decreased the transcription of Per2, but did not significantly affect the transcription of Bmal1 and Per1, in the SCN. These results suggest that H2S slows down the running of circadian rhythm, or in other words, H2S turns the central circadian clock slow. This study provides new evidences to support that H2S takes a role in the regulation of central circadian clock. The circadian expression pattern of CBS in the SCN is at least partially associated with the regulatory function of H2S on the central clock, and PER2 and SIRT1 may take major roles in the function of H2S.

We noticed that either increasing the H2S level by NaHS or decreasing the H2S level by CBS inhibitor induced the same results, i.e., phase delay and period length prolongation, only that the extent of NaHS-induced phase delay was greater than that caused by AOAA. Similar contradictory phenomena have also been observed in other studies. For example, Luo, et al. [3] demonstrated that both overexpression and deletion of miR-279 disrupted the circadian rhythm in Drosophila. We recently also found that either elevation or reduction of the microRNA-17-5p level in mice SCN shortened the free-running period length [4]. This unconventional regulatory algorithm deserves further investigations both in mechanism and significance. H2S has been indicated having an anti-aging effect. It is still unknown whether H2S exerts the anti-aging effect through changing the circadian rhythm. Some studies have shown that the free-running periods are shortened in senescent C57BL/6 mice, DBA mice, rats and hamsters, although some contradictory results were also reported. We show here that H2S induced phase delay and free-running period prolongation in mice, and decreased Per2 mRNA level but increased Sirt1 mRNA level in the SCN. It is possible that H2S exerts the anti-aging effect by prolonging the endogenous cycles of circadian rhythm via promoting the expression of Sirt1, because Sirt1 is considered a gene of longevity, and H2S can prevent cell senescence through SIRT1 activation. SIRT1 regulates the expression of clock genes by PER2 acetylation [5]. Higher SIRT1 accelerates the degradation of PER2 protein, thereby promoting the transcription of Clock/Bmal1. This regulatory signaling pathway may explain our finding that exogenous H2S increased the expression of Sirt1 and decreased the expression of Per2.

A question may be raised as whether exogenous NaHS (i.c.v.) would damage the function of SCN. The physiological concentration of H2S in mouse brain is about 50-160μmol/L, but the exact transient local H2S levels in the SCN are unknown. The concentration of NaHS used in the present study was 50mmol/l (i.c.v. 4ml per injection). This NaHS concentration looked much higher than the H2S level of natural brain, but the actual acting H2S level in the SCN should be much lower than the used NaHS concentration if considering the dilution and diffusion of NaHS/ H2S in the cerebrospinal fluid and brain tissues including SCN. We showed that the used NaHS concentration did not affect the light entrainment function of SCN, suggesting that SCN, or including other parts of mouse brain, is quite tolerant to NaHS/H2S. This finding suggests safety of relatively higher H2S in the treatment of related brain diseases. In conclusion, H2S can induce phase delay and circadian period length prolongation by affecting the expression patterns of clock genes and clock-controlled genes at SCN. This study suggests H2S is regulator of central circadian clock.

The authors declare that they have no conflict of interest in this work.