Mortality Due to Suicide in Viet Nam: Time Trend and Related Socio-Economic Status in A Province and Nationwide from 2005 to 2014

Time trend and the association between social-economics status and suicide (ICD- 10: X60-X84) in the Nghe An province during 2005-2014 and all 64 provinces/cities in Vietnam in 2005 were examined by using the database of yearly population-based mortality registration. Nine groups were divided from the highest to lowest socialeconomic developments. Mortality rates ratio and 95% confidence interval (MRR and 95%CI) and age-adjusted mortality rate (ASR) per 100,000 were calculated. Results showed that there were 1,695 deaths in the Nghe An during 2005-2014 and 3,808 deaths from suicide in 2005 in the whole country. Overall mortality rate (ASR) per 100,000 was 5.53, men 7.89, and women 3.53, giving a men-to-women ratio of 2.24. There was a significantly increased risk of suicide in the disadvantaged region of the Northwest vs the Hanoi and Ho Chi Minh cities, MRR=6.08 and 95%CI: 5.07-7.30, men and women combined. The socioeconomic condition needs to be taken into account in prevention programs for suicide in Vietnam.

Suicide was defined as a self-imposed death where people kill their selves deliberately and voluntarily (Pilgrim, 2014). Suicide has been acknowledged as a significant social and public health problem with approximately 800,000 people dying due to suicide every year. Suicide accounted for 1.4% of all deaths worldwide, making it the eighteenth leading cause of death in 2016. WHO reported that 79% of suicides occurred in low- and middle-income countries in 2016 WHO [1]. Social inequality has been recognized as a significant risk factor for suicidal behaviors in both developed and developing countries. A previous study indicated that arealevel socioeconomic disadvantage increased the risk of attempting suicide among adolescents in the US Yildiz, et al. [2]. A systematic review from 14 different European countries found that there was a significant association between socioeconomic disadvantage and suicidal behavior from 2005 to 2015 Cairns, et al. [3]. Another review revealed a constituent trend at the individual level indicating that poverty is linked with suicidal ideations and behaviors among people living in low- and middle-income countries Iemmi, et al. [4]. Vietnam is among developing countries located in South East Asia having drastic changes in socio-economic conditions in the past decade.
The Vietnam average population has reached 94,666 thousand persons in 2018. The gross domestic product of Vietnam has increased from 1,064 USD per capita in 2011 to 2,389 USD per capita in 2017 General Statistics Office of Vietnam [5]. The crude death rate of Vietnam was 6.8 per 1000 people in 2015 Ministry of Health [6]. However, the mortality due to suicide and related factors are unknown in Vietnam. As suicide is preventable, understanding the changes, consequences and the impact of socioeconomic status is vital to provide evidence-based recommendations. This study aims to examine the changes in mortality due to suicide from 2005 to 2014 in a province and the link between socioeconomic status and mortality due to suicide at the provincial level and national level (Figure 1). 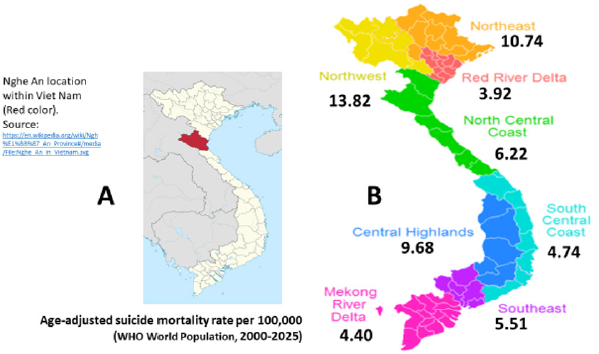 (A) Nghe An location within Viet Nam and
(B) Age-adjusted suicide mortality rate per 100,000 by social-economics status.

We annually collected data of population by sex and causes of death to suicide for the present study through the A6 mortality registration system. In this study, we selected the Nghe an province to collect data at the provincial level because the database was available for ten year-period from 2005 to 2014. The Nghe an province is located in the North Central Coast with an average population of 3,080,000 people in 2015, ranked as the fourth most populous province in the country General Statistics Office of Vietnam [5]. The number of deaths collected in the Nghe an province covered the period of ten years from 2005-2014. Data at the national level were collected across all 64 provinces/cities in 2005. This year, Viet Nam had 10,769 commune health stations (CHS) of 671 districts within all 64 provinces/cities. There was 67.8% of all 10,769-commune health stations employed physicians. Therefore, this existing advantage official grass-root health system network provided a favorable environment to report the cause of death in general as well as suicide in particular for the present study. The average population number of each commune in Viet Nam was about 7,617 residents. According to the estimated crude death rate of 500 per 100,000 per year, the estimated number of deaths per month at one commune was three cases. Therefore, the head of the commune health station can registry into the A6 book actively as the requirement by the ministry of health Le, et al. [7].

For data validation, after obtaining the mortality database, all causes of death were determined by using the WHO Verbal Autopsy questionnaire that was referred to as “the goal standard” WHO [8]. In Nghe An province, data quality was validated for completeness and accuracy of mortality registration in a District for 1,581 deaths occurring in 2014. For all causes including suicide cases, the estimated completeness was excellent reaching as high as 97% Thuong NV, et al. [9]. The estimated Kappa was excellent for the group of injury including suicide, reaching as high as 81%; the reference group was Verbal Autopsy’s database (unpublished data).

The research protocol was approved by the Ethics Committee of Hanoi Medical University on 25 November 2008.

Table 3: Risk of suicide by social-economic status in 2005.

Table 4: Percent distribution and age-specific suicide mortality per 100,000 by sex and age groups, deaths reported from 64 provinces/ cities in 2005.

The main findings have shown a whole country’s suicide status in 2005 and the fatal health event has not been changed during ten year-period from 2005 to 2014 in the Nghe An province, pointing out of suicide being a neglected serious mental health problem. Social determinants of low socioeconomic status or poverty were significantly increased the risk of suicide at disadvantage areas. The other important findings were suicide occurred among senior citizens and about three-fourth of total cases of premature death at working ages. To the best of our knowledge, this is the first study in Vietnam examining the mortality rate due to suicide and the association between suicide and socio-economic status nationwide. The sources of data are reliable because they were collected from the national registration system. The mortality rates are adjusted by age and sex as appropriate. The most important findings from our study are that socio-economic status was negatively associated with suicide mortality rate ratios. Compared to the region with the highest level of socio-economic condition, the individual living in the lowest region had a significantly increased risk of suicide. This finding is in line with previous studies that reported that socioeconomic disadvantage increased the risk of suicide at both the individual level and area-level in many countries Cairns, et al. [2-4].
The suicide dead cases for the whole of Vietnam was 3,803 with an overall mortality rate (ASR) per 100,000 was 5.53, men 7.89 and women 3.53, giving men-to-women ratio 2.24. This mortality rate in Vietnam is much lower than the suicide death rate reported in India (22.0 cases per 100,000) Patel, et al. [10]. The suicide death rate was higher among males that were consistent with findings from other studies Patel, et al. [10,2,4]. We found a significant number of 2,870 deaths due to suicide (75%) occurred during the working ages. This finding raises a concern about adult mental health care in Vietnam and further studies on the causes and risk factors at different occupations. Research worldwide supposed that low socioeconomic conditions, especially unemployment are strongly related to suicidal mortality, and poor psychosocial working conditions associated with suicide Guseva Canu, et al. [11- 13]. Suicidal behaviors include the complex process of thoughts, planning, and attempts. Social support plays an important role in preventing suicide from the beginning of suicidal ideation. Help-seeking behaviors are reported to be correlated with the effectiveness of preventing suicide among working ages Ko, et al. [14].
In Vietnam, researches focus on suicide in the young population more than in the elderly. The highest suicide mortality accounted for the age group from 80 years old in our study suggested that health care for the elderly in Vietnam needs to be studied further. Sociodemographic including social isolation, becoming a widow/ widower, bereavement, health conditions, and mental health problems such as dementia are recognized as risk factors of suicidal behavior in older adults in many countries Conejero, et al. [15]. Along with economic development, Vietnam is facing with challenges of an aging population and social disparities that may increase the prevalence of suicidal behaviors in older people. One of the leading causes of suicide is depression and mental illnesses. One possible explanation for the high suicide mortality at low socioeconomic regions may be that mental health problems have been neglected in these regions with the lack of mental health care and mental health education. Although Vietnam has a good healthcare system from the grassroots level as commune health stations, mental health services are not available and accessible for local people in disadvantaged regions. Individuals with mental illnesses or individuals with suicidal behavior can place a significant financial and social burden on communities. Therefore, understanding mental health problems among different age groups or different socioeconomic conditions is necessary to propose comprehensive preventive programs.
Despite these findings, it is important to note some limitations associated with the study. There were potential under-reported deaths due to suicide because people want to hide this sensitive health event and most of the suicide cases were not admitted into hospitals. The other limitation was that there was no available full information on causes of suicide that occurred among the working ages and senior citizens. Our research project is continuing and these limitations will be fixed in the next updated study.

The findings suggest that there was a big gap in mental health care between social-economic status and input support from domestic and international aids to avoid preventable suicide in disadvantaged regions in Viet Nam is highly needed.

Time trend and the association between social-economics status and suicide (ICD- 10: X60-X84) in the Nghe An province during 2005-2014 and all 64 provinces/cities in Vietnam in 2005 were examined by using the database of yearly population-based mortality registration. Nine groups were divided from the highest to lowest socialeconomic developments. Mortality rates ratio and 95% confidence interval (MRR and 95%CI) and age-adjusted mortality rate (ASR) per 100,000 were calculated. Results showed that there were 1,695 deaths in the Nghe An during 2005-2014 and 3,808 deaths from suicide in 2005 in the whole country. Overall mortality rate (ASR) per 100,000 was 5.53, men 7.89, and women 3.53, giving a men-to-women ratio of 2.24. There was a significantly increased risk of suicide in the disadvantaged region of the Northwest vs the Hanoi and Ho Chi Minh cities, MRR=6.08 and 95%CI: 5.07-7.30, men and women combined. The socioeconomic condition needs to be taken into account in prevention programs for suicide in Vietnam.