Phytomedicine has been of increasing interest in recent years. Over 65 % of the world’s population relies on traditional and medical approaches to treating diseases [1]. The return to phytotherapy is more than using an herb to treat an illness or a crude herbal preparation rather than a specific isolated component. Plants are considered essential resources for researchers to prove and develop new drugs. Generally, using plants in the treatment of disease has a long history [2,3]. Thus plants have been primary resources for producing traditional drugs effective in treating cancer and inflammatory diseases [4]. In addition, plants containing essential oils have bioactivity against a host of bacteria, fungi, viruses [5,6]. Currently, essential oils of medicinal plants are increasingly used thanks to their antibacterial, anti-inflammatory, antiseptic, antiviral, antifungal, antioxidant, and antitumor potential [7]. Essential oils are also used in other areas of economic interest, such as cosmetics, perfumes, and aromatherapy [7,8]. Fragrant and aromatic plants such as members of the Asteraceae, Lamiaceae, Rutaceae, and Verbenaceae produce essential oils, which historically have been important in traditional medicines [5]. Citrus species have beneficial pharmacological activities, including antibacterial, vascular protectant, antispasmodic, analgesic, antipyretic, antiinflammatory, and antitumoral effects [9-11].
Citrus peel essential oils have also been searched for their natural antioxidant and antimicrobial properties [12,13]. Furthermore, studies have shown the synergistic effect of two or more ingredients of essential oils against various human pathogens. It is necessary to know more about Citrus paradisi essential oil (CPEo) antioxidant, cytotoxic, and antitumor activity. Therefore, the DPPH, ABTS, FRAP, and NO• techniques studied the antioxidant potential in a chemical system. Furthermore, to check the antitumor activity, MTT was realized using HeLa and MCF-7 tumor cells.

In this study, the grapefruit (citrus paradisi) was collected in March 2018 from Sfax, Tunisia. Sfax is one of the biggest coastal cities in Tunisia. It is located in the eastern part of the country. The climate in this area is arid to semiarid with irregular and torrential precipitations [14]. After the collection, it was washed, peeled off and cut into small pieces.

The zest of citrus paradisi was hydro distilled using a Clevengertype apparatus to recuperate the essential oils for 2h to produce the volatile constituents. The distilled essential oils were dried over anhydrous sodium sulfate; then separated from the distillate by liquid-liquid extraction using cyclohexane solvent. The recuperated oils were stored at + 4 °C.

DPPH Radical Scavenging Assay: Different aliquots from the stock solution (200μl in 1 ml Me OH) of essential oils were mixed with 500μl of 0.2mM diphenyl picryl hydrazine (DPPH) final volume brought to 1mL. The mixtures were vigorously shaken and allowed to stand in the dark for 30min at room temperature. The absorbance was measured by spectrophotometry (LKB BIOCHROM® ULTROSPECPUS 4054 UV/VIS) at 517 nm against a control sample without DPPH. The percentage of radical scavenging activity was calculated using the following equation:

Cell Lines and Culture Conditions: In this study, cancerous cells were used: HeLa and MCF-7. HeLa is a transformed cell line expressing the HPV18 virus (human papillomavirus) [18]. MCF-7 (Michigan Cancer Foundation-7) was isolated from a 69 years old woman with metastatic disease [19]. Hela and MCF-7 cell lines were supplied by ATCC (Manassas, VA, USA). All cells were grown in RPMI 1640 medium (Gibco) supplemented with 10 % (v/v) foetal calf serum (FCS) and 2mM L-glutamine in tissue culture flasks (Nunc). They are incubated at 37 °C, 95 % air and 5 % CO2.
MTT: For the test of cytotoxicity activity, the MTT (3-(4,5-dimethylthiazol-2-yl)-2,5-diphenyltetrazolium bromide) (Sigma-Aldrich, St. Louis, MO, USA) test was done [20]. First, HeLa or MCF-7 cells in 96-well plates were exposed to different concentrations of CPEo (3 wells for each concentration) and incubated for 48h at 37 °C. Then, 20μl of MTT was added to each well. After 4h of incubation at 37 °C, the supernatant was removed, 180μL of DMSO/Methanol (1V/1V) were added to each well to solubilize the formazan crystals. Finally, the plates were shaken 15min at room temperature, and the absorbance was detected at 570nm with a spectrophotometric plate reader.

The statistical studies are carried out using the program SPSS (19.0). The t-Student test carried out the comparison between the averages. The results are represented as mean ± standard deviation (SD).

The Yield of Grapefruit Essential Oils

The yield of the extraction is defined as the ratio between the mass of essential oil obtained and the mass of the plant material.
Y (%) = A/A1 ×100
A: Quantity of extracts recovered in g.
A1: Quantity of dry vegetable matter used for extraction expressed in g.
CPEo yield was 1.32g Eo / 100g dry matter. This result proves that the zest of the fruit was rich in Eo.

DPPH Radical Scavenging Assay: The curve relating to DPPH radical scavenging shows that the inhibition percentage of the free radical increases with the increase of concentration, either for BHT or CPEo (Figure 1). In effect, Citrus paradisi essential oil has a significant antiradical effect attending 54 % and can be qualified such having an important antioxidant activity.

ABTS+ Radical Scavenging Effect: The results illustrated in the curve show that the percentage of inhibition gradually increases with the concentration of grapefruit essential oil. At a concentration of 1mg/mL, the inhibition rate reaches 83 % (Figure 2).

Ferric-Reducing Antioxidant Power (FRAP): The FRAP assay is usually used to measure the capacity of the sample to reduce the ferric complex to the ferrous form. The FRAP assay confirmed the antioxidant activity of CPEo, with values equal to 66 % (Figure 3). 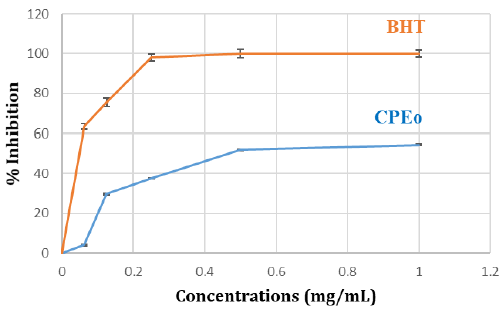 Figure 1: Antiradical activity against the radical DPPH in the percentage of inhibition CPEo. Aliquots of various concentrations of CPEo (0, 0.2, 0.4, 0.6, 0.8, 1mg/mL) and standard BHT were mixed with DPPH and incubated in the dark. The antioxidant activity of CPEo was measured using a spectrophotometer at 517nm. Results were expressed as mean inhibition percentage (%) ± standard deviations (n = 3). BHT was used as the reference standard. 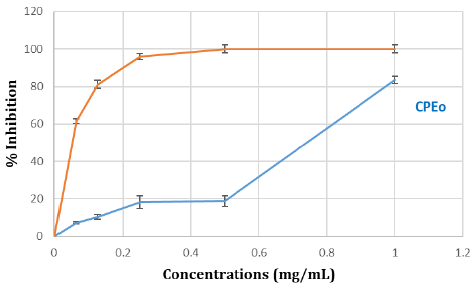 Figure 2: Anti-radical activity against the radical ABTS in percentage of inhibition of CPEo. Various concentrations of CPEo (0 to 1mg/mL) and acid ascorbic were mixed with FRAP reagents. The reduction of ferric ion (Fe3+) to ferrous form (Fe2+) by CPEo produces an intense blue light revealed as a change in absorption at 700nm. Results were expressed as mean inhibition percentage (%) ± standard deviations (n = 3). Ascorbic acid at various concentrations (0 to 1mg/mL) was used as standard. 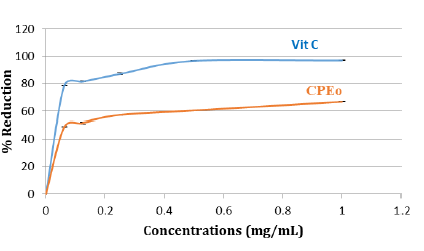 Figure 3: Inhibition (%) of standard Vit C and CPEo by Ferric Reducing Antioxidant Power (FRAP) assay. Various concentrations of CPEo (0 to 1mg/mL) and acid ascorbic were mixed with FRAP reagents. The reduction of ferric ion (Fe3+) to ferrous form (Fe2+) by CPEo produces an intense blue light revealed as a change in absorption at 700nm. Results were expressed as mean inhibition percentage (%) ± standard deviations (n = 3). Ascorbic acid at various concentrations (0 to 1mg/mL) was used as standard.

The capacity of citrus paradisi essential oils to scavenge NO was also measured. CPEo was checked for its inhibitory effect on nitric oxide production. The inhibition on free radical percentage increases with elevated concentrations of essential oil and Vitamin C (Figure 4). 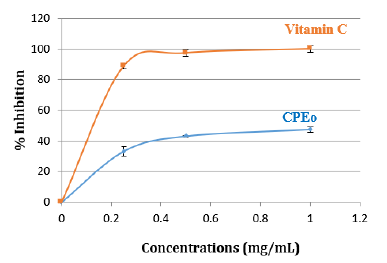 Figure 4: Inhibition (%) of standard Vit C and CPEo by Ferric Reducing Antioxidant Power (FRAP) assay. Various concentrations of CPEo (0 to 1mg/mL) and acid ascorbic were mixed with FRAP reagents. The reduction of ferric ion (Fe3+) to ferrous form (Fe2+) by CPEo produces an intense blue light revealed as a change in absorption at 700nm. Results were expressed as mean inhibition percentage (%) ± standard deviations (n = 3). Ascorbic acid at various concentrations (0 to 1mg/mL) was used as standard.

The MTT test studied the cytotoxic effect on HeLa and MCF-7 cells. Cells were cultured in 96-well plates for 48 h, in the presence and absence of the different concentrations of CPEo. The percentage of cytotoxicity was calculated. Our results showed an antitumor potential of the grapefruit essential oils on both cancer cells: Hela and MCF-7 according to the concentrations used: from 0.78 to 25μg / mL (Figure 5).

(a) Study the cytotoxicity of the essential oil of the grapefruit outer wall in the HeLa
(b) and MCF-7 cell lines.
Cytotoxic activity of citrus paradisi essential oil on cancer cell lines. MTT assessed cell viability. The percent growth reduction was calculated from the extinction difference between treated cell culture and the control. Results are the means of three repetitions.

The current study was designed to extract the essential oil from grapefruit. It was obtained by hydro distillation, which is the oldest method and the most used because it is very easy to achieve. Our results agree with studies, which confirmed that Citrus is rich in essential oil, and their yields varied from one plant species to another, ranging from 0.2 to 2.0 % [21]. Other work has shown that yield of Citrus paradisi essential oil collected in September in southern Taiwan was attending 0.37 %, and others were collected in October from Iran were 0.85 % [22,23]. So the difference in EOs yields may be related to the plant’s origin, the environmental conditions, time of collection, and extraction method [24]. The CPEo analyzed in this work showed potent radical scavenging activity. We have demonstrated that CPEo has an interesting antioxidant activity highlighted by the DPPH, ABTS+, FRAP, and NO. Our results agree with the literature, which showed that citrus EO possesses an anti-free radical activity DPPH of 17.7 to 64 % [7]. Other studies on grapefruit seed oil showed a high antioxidant potential (61 %) [25]. Furthermore, the effect of citrus paradisi essential oils on ABTS free radical was determined and exhibited a higher radical scavenging activity. Our results corroborate with other studies showing a significant antioxidant effect of C. paradisi EO against ABTS radicals [22]. In addition, the CPEo had a significant FRAP value, which was in accord with the results obtained by Jang et al. that confirmed the higher FRAP values in the peel of grapefruit [26]. The superoxide anion assay is commonly used to evaluate the superoxide anion radical-scavenging ability of plant extract. Therefore, CPEo was checked for their inhibitory effect on nitric oxide production in the present study, attending 47 %. Our results agree with studies that confirmed that the superoxide values of grapefruits varied from 36.83 % to 50.31 % in peels [27]. The antitumor potential of CPEo was tested on HeLa and MCF-7 tumor cells. Our results showed a considerable antitumor activity dependent on essential oil concentration. This result agrees with the work of Zu et al., which shows that essential oil from grapefruit exhibited an antiproliferative effect on MCF-7 cells [28]. Furthermore, Monajemi et al. studied the impact of different concentrations of essential oils of other species of the citrus family as Citrus limon, Citrus medica, and Citrus sinensis on MCF-7 and Hela [29]. They proved a significant decrease in viability in a dose-dependent manner in both tumor cells [29].

This work is dedicated to the memory of Pr. Saloua Lassoued Elamri. We will never forget her, and she is always in our hearts.