Dynamics of Fat, Protein, Lactose Concentration and the Energy Value of Milk in the Milk of a Nursing Woman When Expressing Milk by an Electric Vacuum Breast Pump and Breast Pump with Vacuum and Compression Components

Nikolay P Alekseev1*, Vladimir I Ilyin1, Irina I Ryumina2 and Vadim A Uleziko3

Large clinical material leaves no doubt that breast milk has unique nutritional and immune properties for the health and development of the child [1]. Maternal milk is of particular importance for the health and development of preterm children [2]. Together with the fact that children born before 34 weeks of pregnancy cannot yet independently remove milk from the mother’s breast women should express milk and feed the child depending on the maturity of the child for several weeks or even months. In addition, mothers who have given birth on time may have problems in the process of breastfeeding. To achieve lactation success before a baby’s suckling can ensure the effective extraction of milk, it may be necessary to express milk from the mother’s breast using a breast pump. Breast pumps must meet specific mechanical requirements. In particular breast pumps must effectively stimulate the mechanoreceptors in areola to promote maternal secretion and milk-ejection reflex. Breast pumps must effectively remove milk from the breast. Pumping should not be painful or cause damage to the nipples and areola. At the same time, it is important to point out that breast pumps, along with the optimal velocity and amount of milk expression, should provide a sufficiently high quality of milk. It is interesting to note here that there are experimental data indicating the relationship of milk composition with milk expression methods. In particular, the fat content of milk increases with the use of mechanical massage of the mammary glands during expressing by the milk breast pumps, as well as with manual expressing, that is, when using not vacuum stimuli, but compression stimuli [3,4] for milk ejection. In this connection, our study was carried out to determine the content of basic nutrients of milk (fat, protein, lactose) and energy value of milk when expressing milk by an electric milk pump in the mode of vacuum ejection of milk and using simultaneously vacuum and compression pulses for milk ejection.

Nine women 25-34 years old, 5-8 weeks lactation who volunteered to be included in this study were examined. Six of them were primiparous breastfeeding mothers and three were multiparous mothers. All infants were born in term. The informed consent of the women was obtained according to the Declaration Helsinki. The analysis was carried out in 10 ml samples of milk, which were continuously expressed by breast pump. A commercially available, software- controlled electric breast pump “Lactopuls” with both vacuum and compression stimuli was modified to conduct experiments. Just like vacuum electric breast pumps, the breast pump “Lactopuls” consists of a control unit with a compressor and a removable funnel-shaped cup that is placed on the breast of a woman. Schematically, the removable funnel-shaped cup is shown in Figure 1A. The pump works as follows. Vacuum and compression (overpressure) stimuli are applied in a certain sequence to the removable funnel-shaped cup from the control unit. Just as when milk is excreted by a child [5,6] the beginning, a vacuum act on the mammary gland, which enters the cup via a pneumatic hose (11), the areola of the breast (2) begins to stretch, stimulating the skin stretching receptors. At the same time, under the influence of vacuum, milk begins to flow out of the ducts. After the amount of vacuum inside the elastic cone tube reaches the maximum value, positive pressure stimuli are applied to the pneumatic piston (8). The movement of the pneumatic piston membranes (9) is transmitted to the levers (5) and the rigid plates (4) compress the conical part cup and the areolar area with milk ducts located in it. Compression further increases the rate of milk ejection. It is important to note here that, just as in a child, the amplitude of compression and vacuum stimuli can be independently regulated. Thus, the breast pump “Lactopuls” can work as vacuum (suction) breast pump and breast pump with vacuum and compression stimuli simultaneously.
The sampling continuity was ensured by the specially developed method (Figure 1B-1D). The mode of operation of the apparatus was set (milk was ejected by vacuum or simultaneously by vacuum and compression) and the cone-shaped cup (3) was mounted on the breast (1) to transmit milk from the breast through the silicone milk tube (12) to the auxiliary milk container (13). Milk was transferred from the auxiliary milk container (13) through the elastic tube (15) to the measuring milk container (16). After 10 ml of milk (Fig. 1B) had entered in the measuring container (16), the elastic silicone tube (14) was closed by a clamp (17) and the measuring container was detached (Fig. 1C). A similar volume empty measuring container was then attached. At this time, milk withdrawal did not stop, and it accumulated in an auxiliary container (13). The clamp was then removed, and the milk stored in the auxiliary container, and the newly extracted milk began to enter the measuring container (Figure 1D), until 10 ml of milk was again collected in the measuring container and so on. Milk from the disconnected measuring container was poured into a special container for subsequent analysis. It should be noted that the replacement time milk from of the measuring container took no more than 10 s. During this time, no more than 5 ml of milk was recruited in the auxiliary container at maximum rates of milk exit from the gland. The same mammary gland ejected in two different milk withdrawal modes:
1. Only with the help of vacuum stimuli
2. Simultaneously with vacuum and compression stimuli.
Considering that the milk composition has a circadian character [7] the mammary gland was ejected in both modes at the same time of day. Milk analysis of macronutrients (fat, proteins, carbohydrates) and energy value in the samples was performed 1-1.5 hours after milk ejection with a mid-infrared human analyzer Miris AB Uppsala, Sweden. Statistical analуsis was performed using test two-way ANOVA. Large differences in nutrient concentrations in milk were found in women. Therefore, data for each woman were normalized relative to the concentration value of the first sample ejected from the breast by vacuum stimuli. Statistical significance was set as p<0,05. 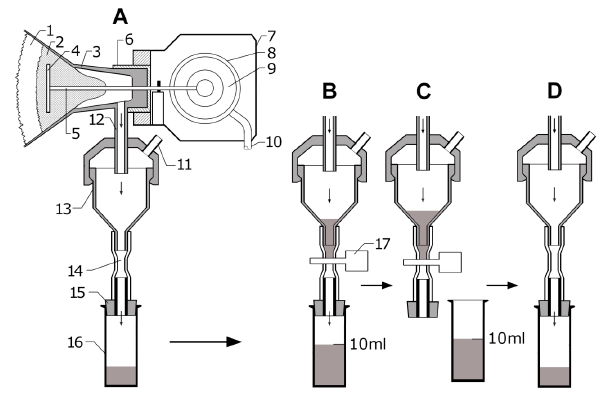 During observations among women, marked variations were found in the amount of milk ejected and in the concentration of milk nutrients studied. At the same time, the dynamics of nutrient concentrations in the process of milk ejection did not depend on the mode of operation of the apparatus and was similar for all women. Figure 2А shows graphs of changes in fat concentrations as well as the protein of milk (B) in 10 ml samples during the ejection milk during the whole session of milk ejection. Surveys showed that the greatest changes in milk samples are observed in fat concentration (Figure 2A). The fat content in milk increased in each subsequent sample and in the latter samples exceed its content in the initial samples by 2-3,5 times. The total amount of ejected fat was about 25% more when milk ejected by vacuum with compression, than when milk ejected only by vacuum. When determining the protein concentration in milk samples, an increase in its concentration was also found during milk ejection, but on 10-20% (Figure 2B). The increase in protein concentration occurred evenly during the entire ejection time. In contrast to the dynamics of fat and protein concentrations, the concentration of carbohydrates did not change in all women during of the milk ejection (Figure 3A). The energy of milk is determined by the content of fat, protein, carbohydrates. It is easy to note that the graphs of changes in the energy value of milk (Figure 3B) have a great resemblance to the graphs of changes in the fat content of milk (Figure 2A).

Data on the effect of compression stimuli on the dynamics and concentration of nutrients in milk samples are of great interest. Observations showed that in women, compression stimuli increase the concentration of fat, protein and energy in milk samples. The experimental data available to date suggest that the increase in fat content is due to more efficient milk release by more efficient formation of milk ejection reflexes [8], as well as a direct increase in milk ejection rate by compression stimuli [9]. Recall that the entry of milk lactose and proteins into the alveola cavity is carried out using the exocytosis process. These nutrients are packed into vesicles in the Golgi apparatus of the secretory cells of the alveoli, and then transported to the apical region, fused to the apical membrane, which is perforated and the contents of the vesicles are excreted into the lumen of the alveola [10]. Lipids are synthesized in a smooth plasma reticulum located in the basal part of the secretory cell from fatty acids and glycerol. The synthesized lipid molecules form lipid droplets that the protein sheath covers. As the lipid droplets approach the apical part of the secretory cell, the droplets increase in size, merging with each other. Upon contact with the apical membrane, fat droplets are coated with the cell membrane, form fat globules and then separate from the cell, so that the integrity of the cell is not disturbed. The membrane surrounding the lipid globules prevents the formation of large drops of fat, which can prevent the movement and exit of milk from the alveolar duct system. The size of lipid globules is much larger than the size of protein molecules and lactose. Therefore, diffusion of lipid globules is difficult in thin ducts (70-80 mm) connecting the alveolar cavity with medium and thick ducts, from which milk can be relatively easily withdrawn to a child or breast pump. In addition, it is assumed that fat globules are additionally absorbed to cell membranes forming alveoli and ducts [11].

All this contributes to the fact that milk with a large amount of fat accumulates in the alveoli and thin ducts. The modified filtration theory of milk fat secretion. Whttlestone W.G [12] is widely accepted and suggests that fat globules cluster within the alveoli and are filtered out by the ducts as the mammary gland fills with milk. During milk ejection reflex the clusters of fat globules are forced into the ducts and thus the last milk removed is higher in fat. At the same time, due to the supply of “fatty” milk from alveoli and thin ducts, the fat content of milk in samples increases. Use of compression stimuli in breast pump enhances formation of milk ejection reflex. This suggests that compression stimuli contribute to the formation of a more intense milk ejection reflex and, accordingly, to the ejection of an additional portion of high fat milk.
Small changes in protein or lactose concentrations in samples as milk is excreted may have been due to the fact that protein or lactose molecules are diffused relatively rapidly in the milk volume in the ductal system of the gland between milk events. Therefore, there were no such significant differences in protein and lactose concentrations in milk samples as for milk fat content.

The author declared no potential conflict of interest with respect to the research, authorship and/or publication of this article.

Dynamics of Fat, Protein, Lactose Concentration and the Energy Value of Milk in the Milk of a Nursing Woman When Expressing Milk by an Electric Vacuum Breast Pump and Breast Pump with Vacuum and Compression Components

Nikolay P Alekseev1*, Vladimir I Ilyin1, Irina I Ryumina2 and Vadim A Uleziko3