Background: Evaluation of patients with cutaneous or subcutaneous nodules, especially if they are multiple, is a diagnostic challenge. This study aimed to investigate smears and cell blocks and compare them with examination of tissue biopsies.

Conclusion: Smear cytology is an easy and quick test for diagnosing skin nodules. Performance of cell blocks improves sensitivity and specificity of smear outcome, but both should be attempted, because the smear may be ineffective in some cases while a cell block cannot be performed in others.

Skin and subcutaneous lesions are a common reason for patients to visit family doctors. Ultrasound is increasingly being used to confirm the diagnosis, but deep lesions must be evaluated with magnetic resonance imaging (MRI) or computed tomography (CT) to exclude invasion of the underlying structures and/or malignancy [1]. People can experience a wide range of growths and skin changes over the course of their lives. Family physicians must be able to distinguish between different skin tumors specially to rule out malignancy [2]. Skin malignancy represents one of the most dangerous types of cancers. It spreads gradually in its early stages, so it is necessary to detect it as soon as possible. It is suggested that skin cancer results from the presence of unpaired strands of deoxyribonucleic acid (DNA) in skin cells, resulting in skin genetic defects or mutations [3]. Evaluation of patients with skin or subcutaneous nodules, especially if they are multiple, is a major problem for clinicians. But with full investigations, the problem becomes easier. However, the definitive diagnosis depends on the pathological reports of tissue biopsy [4]. Easy access to skin nodules provides a good platform for performing fine needle cytology and sampling by pathologists or clinicians. Smear cytology gives several default settings [5]. Depth is more important than width. The skin nodule may be mobile or fixed in the underlying tissue. Proper management of skin or subcutaneous nodules needs to know their exact nature, benign or malignant. These nodules can be accessed through needle aspiration, to make smears and cell blocks; this action is relatively non-invasive outpatient procedure and does not require an operating room or anesthesia. It is also a cheap and fast process. Furthermore, it has been suggested that FNAC breast exam is very useful, relatively quick, inexpensive and less invasive test due to the size of the fine needle, and is easier and safer in some lesions, such as very small lesions or those directly under the skin [6]. The question was how is his sensitivity and specificity, and to what extent can he be relied upon in making a treatment decision? Therefore, this study aimed to verify the reliability of examination of smears and cell masses in the diagnosis of skin and subcutaneous nodules and to compare them with examination of tissue biopsies.

Samples of cutaneous or subcutaneous nodules from two hundred and twenty-five patients who decided and gave written consent to participate in the study were selected for this study. These patients were referred from various related clinics in University Hospitals to the Department of Pathology between January 2018 and December 2020. The patients underwent full history taking, general examination for pulse, temperature, respiration rate, body weight, and height. All malignant nodules were primary lesions. The nodules under study were examined clinically for location, size, plurality, shape, consistency, color, if hair was present or not, and whether there was change in color, size, shape, mobility or fixation. Then, a sterile 10 cc plastic syringe was opened, approximately 1 cc of air was taken, the cover was placed on the needle and it was ready for use. The lesion and the surrounding skin underwent a gentle massage with cotton gauze filled with 95% ethanol, then the needle was inserted close to the periphery of the node (avoiding the center where there may be necrotic material that hinders proper smear taking). The needle was moved in multiple directions with suction; then it was gently removed. Then, the suction site was under pressure with clean, sterile cotton gauze for at least 10 minutes to stop possible bleeding. The needle was gently removed from the syringe, and then 1 drop of the syringe’s content was placed on approximately 4 clean glass slides. The smear was prepared by gently moving the blunt end of the syringe.

The remainder of the fluid underwent addition of a mixture of10% neutral buffered formalin, and absolute ethanol, 1:1 solution by gentle suction of the previously prepared formalin/ ethanol mixture by the syringe. The smear was allowed to dry on the glass slides, then the slides are placed vertically in the staining container, with the addition of 95% ethanol, and left for 20 minutes to fix. Fixed smear slides were gently placed in water for 1 min, then in filtered hematoxylin for 5 min, then in tap water for 30 min, then in eosin for 1 min in tap water for 20 min. The slide smear then, underwent placing in ascending grades of ethanol till absolute alcohol. A cap was placed on the smear, which was then examined with an Olympus XL 30 binuclear microscope. The pellets of cells in the used syringe, were left for one day for fixation, then underwent processing to form paraffin blocks, according to Hegazy Method of tissue processing [7]. Unstained slides were prepared from the paraffin blocks then staining with Hematoxylin & eosin (H&E), Giemsa stain and Papaneacolou stain (PAP). Then, the slides were examined with an Olympus XL30 binuclear microscope and photographed with the digital camera on the microscope. Patients in this study underwent FNAC smears, performing cell masses if possible. Then, histological examinations of tissue biopsies were performed after surgical removal of the lesions.

The correlation between results of FNAC smear and that of cell block study was examined by chi-square test and student T-test. Sensitivity test, & Specificity test for both FNAC smear and cell blocks were examined in relation to the tissue biopsy, considering the results of tissue biopsy examination as the reference positive cases [8]. All statistical tests were done with considering the significance value of chi-square test and T-test (P value significance =0.05 or less) using SPSS 16.0 for Windows (SPSS Inc. Chicago, Illinois, USA) 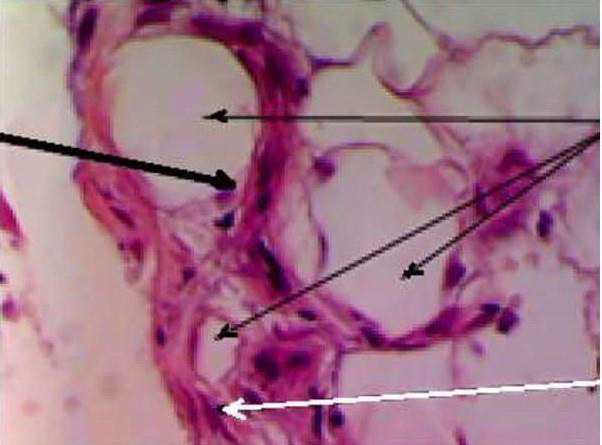 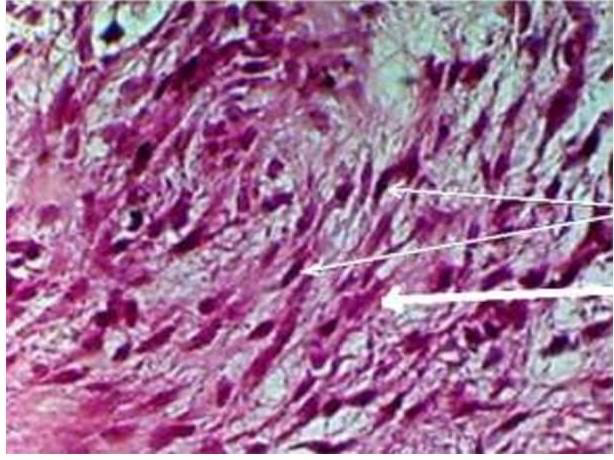 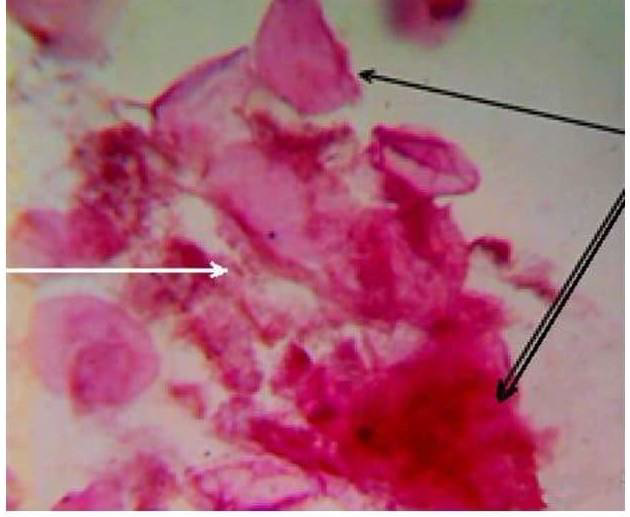 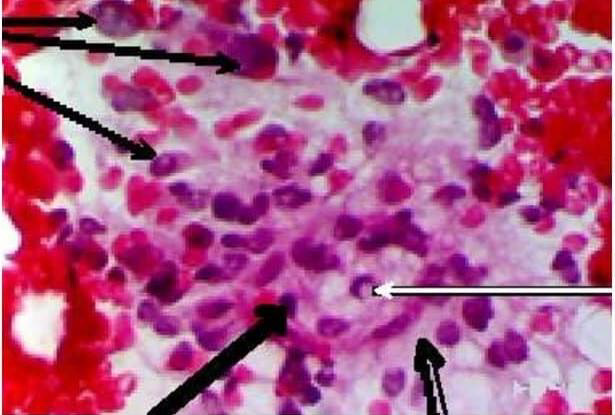 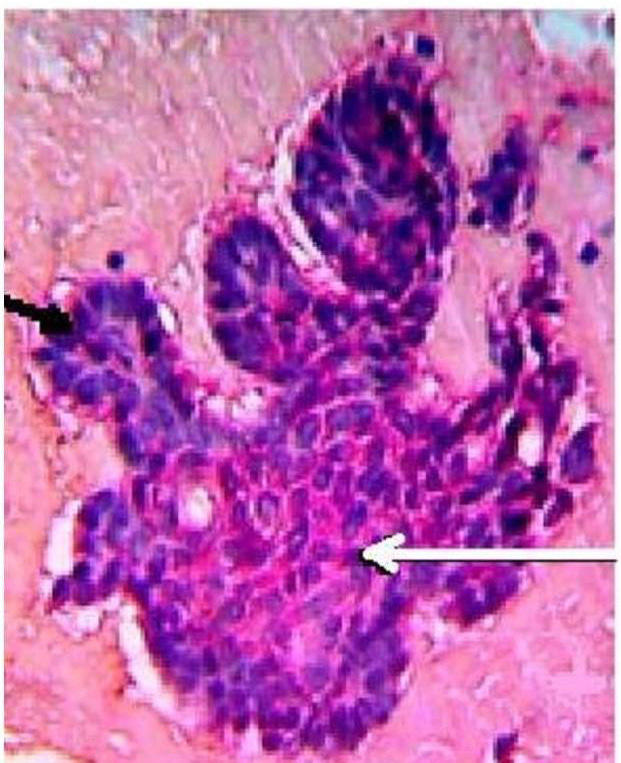 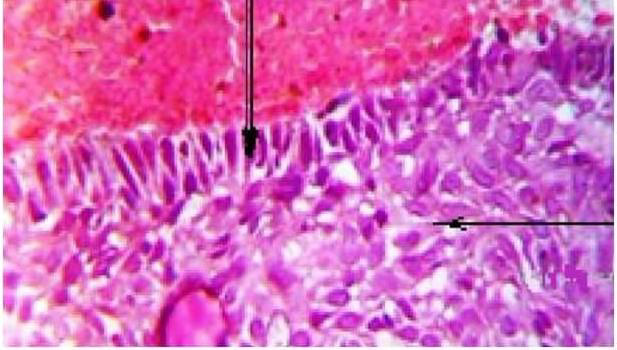 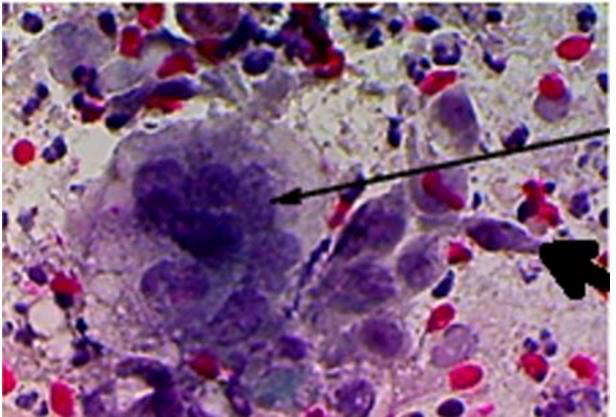 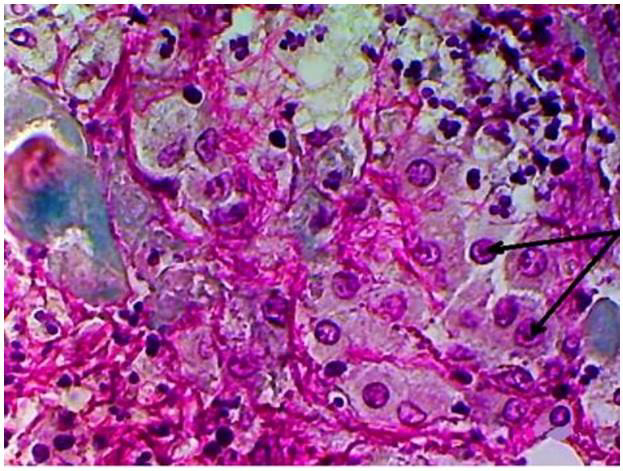 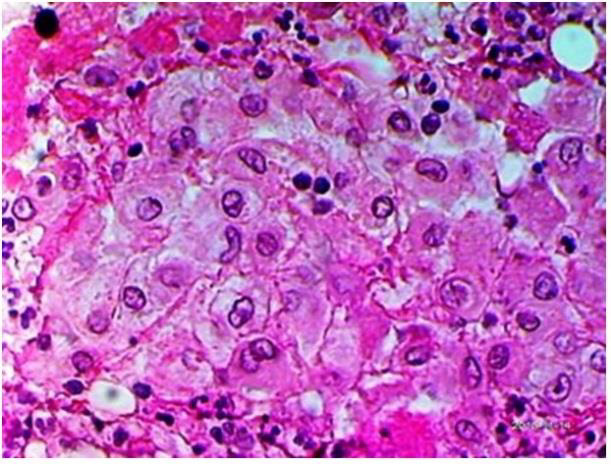 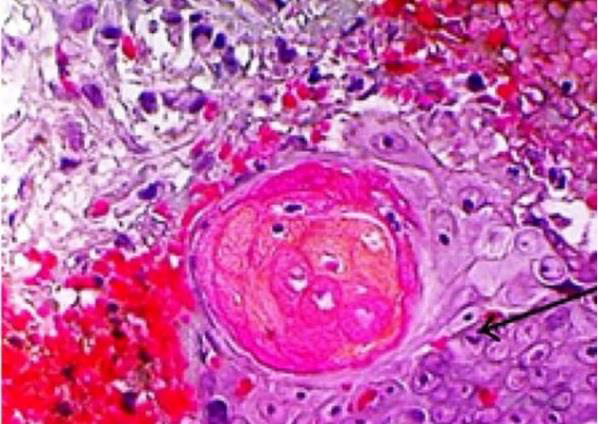 In this study, we focused on the performance of cell mass and its importance in diagnosing and differentiating lesions due to its simplicity and reproducibility. We performed FNAC smear first, as it is a rapid test to detect the presence and types of cells in general and also to compare the features found in FNAC smear and those in cell blocks. FNAC is an easy to perform and inexpensive technique. It does not disturb the architecture of the lesion and has nothing to do with the promotion of metastasis of malignant lesions, because it is a non-invasive technique and does not harm the patient. It looks similar to intramuscular or subcutaneous injection of any medication using a fine needle. We utilized the clot method for preparation of cell blocks, other methods described by [9] and [10]. We preferred the clotting method because the structural forms of cells and tissues were more preserved. We utilized the same clotting method in preparation of cell blocks in two previous studies and gave excellent results [11]. Patients in this work ranged in age from 2 to 76 years with a greater transition to senescence (>40 years was about 70%), and the female to male ratio was 3 to 2, respectively with no significant outcome. This means that the appearance or complaint of the skin or subcutaneous nodules occurs more often in females and at older ages. For FNAC smear results, the test processed a sensitivity about 83% that is a significant percentage but lower than that of cell block (97.77%) This meant that cell block is more sensitive test than FNAC smear. Furthermore, cell block technique is more specific than FNAC smear, (100%) for cell block, and 16.66% for FNAC smear).

These results alluded to the role of cell block in appearance of cell orientations which give a picture resembling the tissue biopsy. Similarly, another study reported high sensitivity and specificity of FNAC in diagnosing skin lesions with sensitivity of up to 100% in epidermal cyst and inflammatory lesions, but showed only 67% for adnexal tumors [12]. The authors also reported specificity of 50% for adnexal tumors.In case of benign cyst, the cyst was filled of fluid, so the smear contains scanty cells, which may not appear, and the smear gave an insufficient result. Cell block provided more accurate result, but the performance of cell block may fail because of low cells and need gentle handling. In case of seborrehic keratosis, the smear was insignificant, because the cells were degenerated, with more brown pigmented cells; the features of cells were vague. On contrast in cell block, the benign features of cells were more obvious. This picture gives a confidence in diagnosis as a benign lesion. In cases of lipoma and fibrolipoma, the smear showed fat globules and/or mature fat cells, fibrous elements a picture found by other authors [13]. These features give a confidence of benign lesion, but the specific diagnosis cannot be achieved. The specific diagnosis of lipoma, fibrolipoma can be given easily in cell block. In cases of fibroma; the smear gave a suggestion of benign fibrotic lesion (spindle-shaped fibroblasts and some collagen fibers), but the cell block showed well-formed fibroma. In cases of juvenile fibromas, the smear may be negative because of the dense contents; however, the cell block is specific for diagnosis, moreover, it takes another importance to exclude juvenile fibrosarcoma and fibromatosis (the absence of mitotic activity). 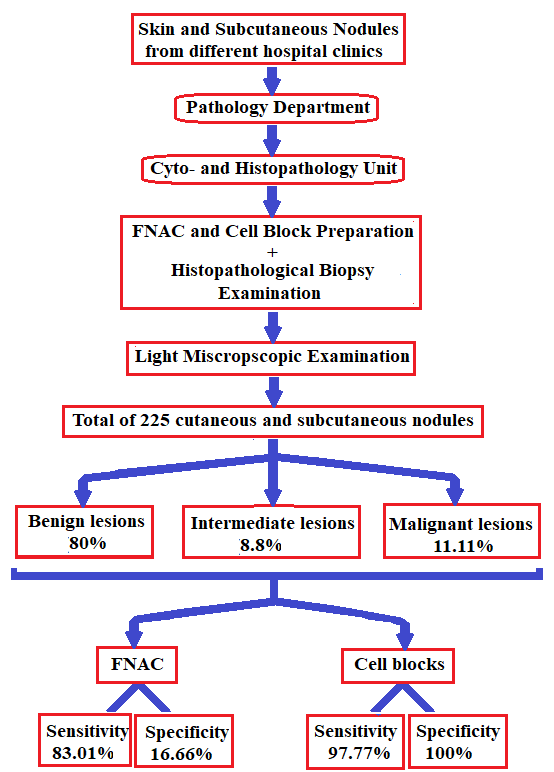 Background: Evaluation of patients with cutaneous or subcutaneous nodules, especially if they are multiple, is a diagnostic challenge. This study aimed to investigate smears and cell blocks and compare them with examination of tissue biopsies.

Conclusion: Smear cytology is an easy and quick test for diagnosing skin nodules. Performance of cell blocks improves sensitivity and specificity of smear outcome, but both should be attempted, because the smear may be ineffective in some cases while a cell block cannot be performed in others.