Lung cancer is one of the representative causes of death globally. Ginsenosides, as a class of natural sterol compounds, attract considerable attention due to their pharmacological effects. To better evaluate the anti-lung cancer efficacy of ginsenosides, we here conducted the systematic review and summarized some of the most recent findings which regard the possible molecular mechanisms. With extensive research on anti-tumor action mechanisms, ginsenosides will be a widely applied natural medicine against lung cancer.

Lung cancer is the leading cause of cancer-related mortality around the world, with an estimated 1.8 million death [1], posing a serious threat to human health. In recent years, plant-derived natural active ingredients become a research hotspot, and show the advantages of rich variety and low toxicity. Ginsenosides, derived from the plants of Araliaceous family, including ginseng (Panax ginseng C. A. Meyer) notoginseng (Panax notoginseng (Burkill) F. H. Chen ex C. H.) and American ginseng (Panax quiquefolium L.), are responsible for most of the pharmacological activities of ginseng. Moreover, some ginsenosides have shown great anti-cancer activity [2]. In recent years, some studies have reported that ginsenosides performed their anti-lung cancer effects by affecting some signaling pathway and down-regulating various oncogenic proteins, however no specific reviews conduct by now. So the purpose of this review is to provide a summary of the anti-cancer effects and the potential mechanisms about ginsenosides of some most recent findings. We will hope that this review may provide valuable insights into application of ginsenosides for treatment of lung cancer.

Ginsenosides, also known as triterpene saponins, are a class of sterol compounds, derived from ginseng which has been widely used as a Chinese herbal medicine for thousand years. Some of ginsenosides have been reported to be effective ingredients against lung cancer due to their anti-tumor activity of ginseng. Recent studies have demonstrated that most ginsenosides are metabolized to their aglycones in the gastrointestinal track as forms of 20S-protopanaxadiol (PPD) and 20S-protropanaxatriol (PPT) [3], their structures as shown in Figure 1. Up to now, nearly 200 ginsenosides have been reported [4]. According to the structural skeletons of aglycones, ginsenosides are divided into three types: dammarane’s, oleananes and ocotillol triterpenes. Among them, the dammarane-type triterpene saponins account for the vast majority and are considered to be the main pharmacologically active ingredients of ginsenosides. The dammarane-type triterpene saponins are divided into two groups: the protopanaxadiol-type ginsenosides (PPD), including ginsenosides Rg3, Rk1, Rh2 and Rd. The protopanaxatriol-type ginsenosides (PPT), including ginsenosides Rh1 and Rk3 [5,6]. Their chemical structures are shown in Figure 2.

Figure 1: The chemical structures of ginsengenin. 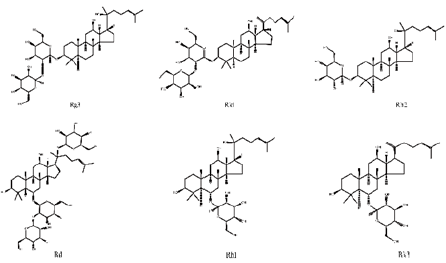 Figure 2: The chemical structures of ginsenosides.

Natural compounds have always been a very good source of anti-cancer drugs and have attracted increased attention. There is increasing evidence indicating that ginsenosides may be able to alter abnormal alterations due to cancer through certain mechanisms. To provide a summary of the anti-lung cancer effects and mechanisms of ginsenosides, we collected data from previous scientific researches published over the last 10 years. In these relevant studies, some of ginsenosides have been shown to possess significant anti-lung cancer activity by inducing cell apoptosis, inhibiting cell proliferation, inhibiting tumor invasion and migration, and inducing cell cycle arrest.

Effect of Ginsenosides on Apoptosis of Lung Cancer Cells

Apoptosis, also known as programmed cell death, plays an important role in regulating proliferation and death of normal or cancer cells. Induction of apoptosis in cancer cells is one of the mechanisms of anti-tumor activity in most antineoplastic drugs [7]. Zhang, et al. [8]. selected A549 cells for experimental research on 20(S)-PPD and found that 20(S)-PPD caused A549 cells lost mitochondrial membrane, released cytochrome C and up-regulated proteins levels of caspase-9 and caspase-3. These results revealed that 20(S)-PPD triggered mitochondrial-mediated caspasedependent apoptosis to exhibit a significant pro apoptotic effect by down-regulating PI3K/AKT signaling pathway in A549 cells. Xie, et al. [9] treated H23 and A549 cells with different concentrations of ginsenoside Rg3 (Rg3) for 24h, and then observed that the proportion of apoptotic cells in A549 and H23 cells increased significantly after 24h of Rg3 treatment. Hu, et al. [10] found that ginsenoside Rk1 (Rk1) increased the proteins expression of Bax, Cleaved caspase-3, Cleaved caspase-8, Cleaved caspase-9 and PARP in A549 and PC9 cells, and decreased the protein expression of Bcl- 2 by suppressing NF-κB signaling pathway. In addition, Joo, et al. [11] found that Rg3 increased active of caspase-8 and caspase-3, whereas decreased procaspase-9 in a dose-dependent manner in A549 cells. The results also observed that Rg3 decreased the levels of p-STAT3, p-Akt, and p-Erk. These results revealed that Rg3 induced apoptosis in A549 cells by down-regulating epidermal growth factor receptor (EGFR) signaling pathway. The above studies demonstrated that ginsenosides induced apoptosis of lung cancer cells by interacting with signaling pathways including PI3K/ Akt, NF-κB and EGFR.

Effect of Ginsenosides on Cell Proliferation of Lung Cancer Cells

Figure 3: Effect of ginsenosides on apoptosis.

Effect of Ginsenosides on Angiogenesis of Lung Cancer Cells

Tumor angiogenesis plays a key role in the formation of new blood vessels, which is essential to tumor growth and metastasis by supplying oxygen and nutrients. Some of ginsenosides, such as Rg3 and ginsenoside Rk3 (Rk3), have been reported to inhibit angiogenesis by interacting with angiogenesis-related signaling pathways. Geng, et al. [14] established mouse Lewis lung cancer animal model to explore the mechanisms of Rg3 in vivo, and found that Rg3 significantly reduced the micro vessel density of tumorbearing mice and inhibited tumor angiogenesis by suppressing expression of VEGF, MMP-9 and HIF-1α. Additionally, Duan, et al. [15] confirmed that Rk3 inhibited angiogenesis via CD34 staining and chick embryo chorioallantoic membrane assay in xenograft tumor models (Figures 4 & 5). 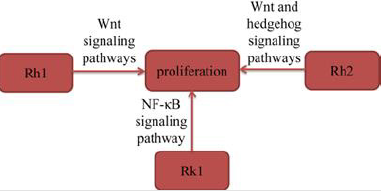 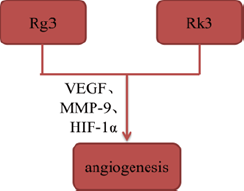 Figure 5: Effect of ginsenosides on angiogenesis.

Effect of Ginsenosides on Invasion and Migration of Lung Cancer Cells

Epithelial-mesenchymal transition (EMT) is an important factor in lung cancer metastasis. In a study [16], after treated with different concentrations of ginsenoside Rd (Rd), the authors found that Rd inhibited invasion and migration in a concentration dependent manner in A549 cells. In another study, Tian, et al. [17] found that Rg3 inhibited lung cancer cells migration and invasion due to inhibitory of EMT-labeled protein. Furthermore, in this study, Rg3 also inhibited the activation of EGFR, and then inhibited MAPK and NF-κB downstream signaling pathways. In summary, by inhibiting EGFR activation, Rg3 suppresses MAPK and NF-κB signaling pathways to effectively inhibit EMT and lung cancer cells invasion (Figure 6).

Figure 6: Effect of ginsenosides on invasion and migration.

Effect of Ginsenosides on Cell Cycle of Lung Cancer Cells

Cell cycle is a highly ordered way of cell operation. Proteins related to the cell cycle in the process of regulation control the infinite proliferation of tumor cells, which achieve the purpose of treating tumors [18]. Liang, et al. [19] found that Rg3 downregulated the proteins expression of CDK2, Cyclin A2 and Cyclin E1 in A549 cells. According to the quantitative real-time reverse transcription-PCR (qRT-PCR) and immunoblotting analysis, Rg3 was certified to play a key role on EGFR/Ras/Raf/MEK/ERK signal pathway regulation. The results showed that Rg3 arrested the cell cycle at the G0/G1 phase via the EGFR/Ras/Raf/MEK/ERK pathway. Zhu [16] treated A549 and H460 cells with different concentrations of Rd for 24h. The results showed that Rd effectively arrested the cell cycle at the G1/S phase. The western blotting results showed that the proteins expression of E2F1, Cyclin D1, Cyclin E1, CDK2, CDK4 and p-Akt were decreased and the proteins expression of p27 and p21 were increased in a concentration-dependent manner. The results revealed that cells after Rd treatment, the phosphorylation level of Akt was decreased, and the expression of G1/S conversion node proteins were decreased, which affected the cell cycle process by PI3K/Akt signaling pathways (Figure 7).

At present, some of ginsenosides play key roles in several malignancies such as lung cancer. Despite several limitations, this review provides assurances that molecular mechanisms of anti-lung cancer activity employed by ginsenosides mainly involve induction of apoptosis, inhibition of proliferation, angiogenesis, invasion and migration, and regulation of cell cycle (Figure 8). In these above studies, ginsenosides exhibited great anti-lung cancer activities both in vitro and in vivo. Furthermore, we found that multiple studies selected Rg3 as an attractive candidate to investigate its anti-lung cancer effects and mechanisms. It may be due to the fact that Rg3 is the main ingredient of Shenyi Capsule (National Drug Administration standard number: Z20030044), which is an important Chinese anticancer drug [20]. As early as 1996, some researchers conducted toxicological tests on Rg3, and the results showed that continuous administration of Rg3 had no obvious embryonic toxicity and teratogenicity, no obvious toxic reaction and no mutagenicity in rats. Relevant studies have reported that Rg3 combined with first-line chemotherapy improved efficacy of chemotherapy and reduced toxicity of chemotherapy drugs [21]. The combination of Rg3 and Osimertinib was also reported to synergically improve the anti-tumor effect [22]. The 25-OCH3-PPD derivatives were synthesized with the natural ginsenoside 25-OCH3- PPD from ginseng leaves as the lead compound. These derivatives were screened for cytotoxic activity against 167 human cancer cell lines. The results showed that compared with 25-OCH3-PPD, four compounds showed higher anti-tumor activity, with an increase of nearly 5-15 times [23]. Bi, et al. [24] investigated the tumor activity of three derivatives of 25-hydroxy protopanaxadiol (25-OH-PPD) against lung cancer. The three compounds significantly inhibited the growth of A549 and H460 cells, while they did not reduce body weight of xenograft mice by oral administration. The above studies fully indicated that ginsenosides showed great potential in the treatment of lung cancer. However, there are many studies on common ginsenosides, but few on some rare ginsenosides, so we will hope that more and more studies related to rare ginsennosides will be conducted, so as to provide new ideas for the treatment of lung cancer and bring new hope to patients. 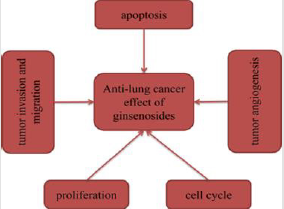 Lung cancer is one of the representative causes of death globally. Ginsenosides, as a class of natural sterol compounds, attract considerable attention due to their pharmacological effects. To better evaluate the anti-lung cancer efficacy of ginsenosides, we here conducted the systematic review and summarized some of the most recent findings which regard the possible molecular mechanisms. With extensive research on anti-tumor action mechanisms, ginsenosides will be a widely applied natural medicine against lung cancer.