#These authors contributed equally to this work

Objectives: Multifocality is one of the prominent characteristics of papillary thyroid cancer (PTC), however the management strategy for multifocal PTC remains controversial. Moreover, evaluation of impact of multifocality in a quantitative way rather than a qualitative way still needs to be elucidated.

The incidence of papillary thyroid carcinoma (PTC) has increased in a dramatic pattern in recent years [1,2]. PTC often presents with multifocal tumors, i.e., presence of two or more non-contiguous tumor foci either unilaterally or bilaterally, which is one of the most prominent characteristics of PTC. It is well established that multifocality represents a higher propensity for a more advanced staging, and multifocality per se is a qualitative parameter to assess the risk for LNM. However, it is not easy to quantify its effects on pathological outcome and clinical features. The prevalence of the multifocal PTC ranged from 32% to 39% in large series of PTC [3-5]. In clinics, multifocality is often empirically treated as a high-risk factor for aggressiveness of PTC and reported to be associated with extensive LNM [4], higher recurrence rate [5], and more aggressive biological behavior [6,7], compared with unifocal PTC. However, inconsistent and even contradictory findings also exist [4,8,9]. It is well accepted that active surveillance should be recommended to patient with microcarcinoma at low risk. However, a clinical dilemma is how do physicians handle with multifocal microcarcinoma which all the foci are less than 1cm in diameter. In other words, whether multifocality could be used as a quantified parameter rather than a qualitative parameter need to be addressed. Moreover, although prophylactic central compartment neck dissection is not routinely recommended according to ATA guidelines, insidious LNM do exist and be the cause for the recurrence of PTC. Thus, is it safe to recommend not receiving central compartment neck dissection for all patients with multifocal papillary thyroid microcarcinoma?
In this study, we retrospectively analyzed 1034 patients with papillary thyroid carcinoma to evaluate the how the multifocality affects the central compartment LNM and try to quantify the multifocality to further predict the possible insidious central compartment LNM.

Patients diagnosed with papillary thyroid cancer (classic type) between April 2013 to September 2013 in Tianjin Medical University Cancer Institute and Hospital were recruited. Medical records, ultrasonographic and histopathological reports were reviewed. Patients with histological variant (follicular, tall cell, trabecular or others) or patients whose tumor is in the isthmus were not included. Sex, age, tumor size, bilateral disease, tumor foci number, and cervical LNM were determined in each patient. Ethics approval was obtained from The Institutional Review Board of Tianjin Medical University Cancer Institute and Hospital (approval: BC2021023), and the requirements for patient approval and informed consent were waived because of the retrospective nature of the study.

Determination of Number of Tumor Foci and Tumor Size 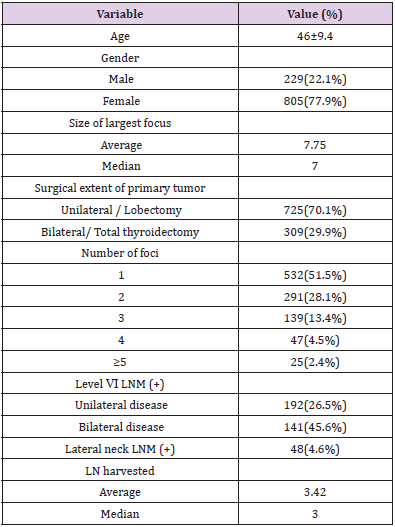 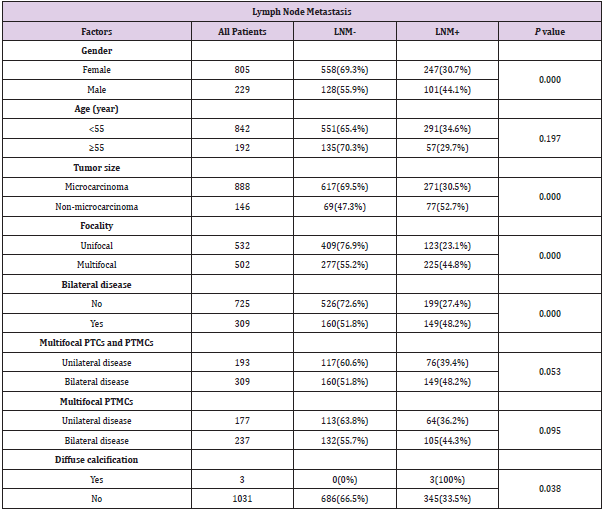 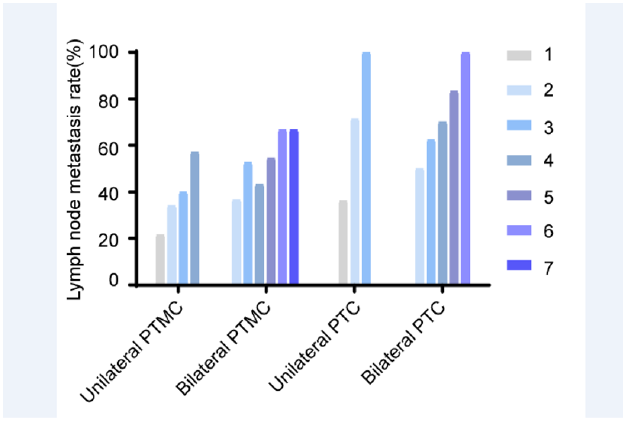 Previously, multifocality has been implicated as a qualitative parameter to assess the risk for central compartment LNM. However, few studies have shown how the number of foci affect the LNM. In this study, the risk factors for lymph node metastasis were studied, then the effect of multifocality was further investigated between the number of PTC foci and LNM to central compartment. Multifocality is a common clinical characteristic of PTC and has been reported in 18–87% of patients with PTC [10] and was seen in 48.5% of patients in the present study. Our results show that the risk of level VI lymph metastasis increases proportionally with the number of tumor foci, both in PTMCs and PTCs which diameter is larger than 1cm. When the number of foci reaches 3 or more, the level VI LNM rate exceeds 50% or higher (52.6% and 62.5% for bilateral PTMC and bilateral PTC). And even 100% in the presence of 6 foci. Ayham et al reported a similar result in the presence of 3 or more foci, except that no appreciable difference in level VI lymph node metastasis in patients with one and two foci [11]. These findings identify multifocality in PTC as an indicator of tumor aggressiveness, manifesting in a higher propensity for locoregional metastasis.
Both univariate and multivariate analysis identified male gender, tumor size larger than 1cm, multifocality, diffuse calcification as significant predictors of level VI lymph node metastasis in the study population. These findings are consistent with previously published studies identifying risk factors for level VI metastasis in PTC [12-14]. Of note, our data indicated a rare phenomenon diffuse calcification as significant predictors of level VI lymph node metastasis. Diffuse calcification has been implicated with thyroid malignancy [15,16]. In our study, the LNM rate for the PTC with diffuse calcification is 3/3 (100%), although the case number is small, it still strongly indicates that PTC patients with diffuse calcification under ultrasonography has a higher propensity for locoregional metastasis. Another interesting finding is that, when we compare the LNM rate between multiple PTMCs (6mm≤largest diameter≤10mm) and unifocal PTC which diameter is larger than 1cm, there is no significant difference between these two groups. This finding indicates that multifocal PTMCs with 6mm≤largest diameter≤10mm has the same propensity for LNM in central compartment, compared with unifocal PTC with largest diameter ≥10mm. Other studies have shown concordant result that multifocal PTMC with relative bigger foci is at higher risk of LNM although it might not be clinically evident. Zhao et al. has proposed the concept of aggregate diameter (AD) to better assess the tumor burden [17,18]. Abbas et al. also pointed out that the sum up of the diameter of each tumor foci ＞10 mm confers a similar risk of aggressive histopathological behavior with unifocal PTC greater than 10 mm [19].
In conclusion, this study provides evidence that multifocal PTCs are at higher risk of LNM, which tendency might increase in the presence of over 4 foci when compared with unifocal and bifocal disease. In addition, multifocal PTMCs with largest foci between 6mm to 10mm might have the same tendency to PTC which diameter is ＞10 mm. Thus, multifocal thyroid PTMCs should not be managed as conventional PTMCs at low risk, thereby prompting more aggressive treatments.

The author reports no conflicts of interest in this work.

#These authors contributed equally to this work

Objectives: Multifocality is one of the prominent characteristics of papillary thyroid cancer (PTC), however the management strategy for multifocal PTC remains controversial. Moreover, evaluation of impact of multifocality in a quantitative way rather than a qualitative way still needs to be elucidated.