Purpose: To evaluate the role of intra-arterial chemotherapy (IAC) in the management of unilateral, unifocal retinoblastoma (RB) as a single therapy, associated to neither focal nor systemic adjunctive therapies.

Results: Full regression of the lesion was observed in 30 eyes (93.75%). 2 eyes were enucleated. Ophthalmoscopic remissions type I and III with higher calcific component were achieved. Additionally, neither recurrences nor new tumors appeared during the patient follow-up, which ranged from 10 months to 13 years.

Conclusion: Selective intra-arterial chemotherapy has demonstrated to be highly effective in terms of disease control and anatomical preservation in case of unilateral unifocal disease, without requiring any additional systemic and/or focal therapy.

Retinoblastoma (RB) is the most common intraocular malignancy of in childhood. Approximately 60% of cases are unilateral while 40% are bilateral. With respect to gender distribution, there is male predominance 1.2:1 with survival rate ranging from 86-92%. It is generally diagnosed in patients at an average age of 18 months, with 90% cases diagnosed younger than 5 years of age [1,2]. With recent advances in research and clinical trials, there has been a paradigm shift in the treatment protocols of RB. Enucleation is required for extensive RB. Initial treatment can be conservative when preservation of residual visual function, even minimal, appears to be possible. It usually comprises neoadjuvant Intravenous Chemotherapy (IVC) followed by local treatments of each tumor (Laser, Thermotherapy, Cryotherapy, Plaque radiotherapy) [3]. These treatments allow good eye preservation rates and decrease the indications for external beam radiation (possible cause of second tumors in the irradiation area and beyond) but are not free of ocular and systemic toxicity. In order to improve the efficacy of intraocular penetration of the chemotherapeutic agents and therefore local tumor control, it has been proposed to administer chemotherapy via the intra-arterial route directly into the ophthalmic artery [4,5]. Melphalan, topotecan and carboplatin are the chemotherapeutic agents currently used in the treatment of RB.

This is a single center, prospective, interventional case series conducted at the Referral Center for Retinoblastoma of University of Siena, with the collaboration of Unit of Neuroimaging and Neuro intervention from May 2008 to April 2021. The study was approved by the Institutional Review Board following the tenets of the Declaration of Helsinki. Since all the patients were minor, written consent for publication has been obtained from all patients’ parents. Thirty two eyes of 32 consecutive patients, 18 (60%) males and 14 (40%) females, mean age at diagnosis 21.83±16.44 months, with unilateral unifocal RB who underwent IAC alone were included in the study. The unifocality of the lesion represented a main inclusion criterion and it was assessed either by MRI and ultrasounds performed at diagnosis or by ocular fundus examination at diagnosis in case of stage A and B tumors and after tumor regression for advanced stage disease. Informed consent was obtained from all the participants and a proforma was designed to collect the data of patients including name, age at the diagnosis, gender, laterality, stage of disease and any history of previous treatments. All the patients underwent genetic testing at diagnosis. Examination under anaesthesia was performed with photographic documentation of clinical findings using Ret Cam II (Clarity medical system, Pleasanton, CA, USA), Ultrasound Examination of Anterior (UBM) and posterior segments was performed too. Magnetic Resonance Imaging (MRI) was performed in all the patients on a 1.5-T MR system (Siemens Avanto, Erlagen, Germany), according to the protocol of European Retinoblastoma Imaging Collaboration [6].

We added DWI-sequences (b values: 0 and 1000 s/mm2, FOV 230, thickness 2.6 mm, TR 3200 ms, TE 100 ms, matrix 192 x 192, diffusion directions 3). Apparent Diffusion Coefficient (ADC)-values were extrapolated using a hand-drafted Region-of-Interest (ROI) ; 1 to 5 ADC-values (depending on the tumor size) were obtained. State of anticoagulation was achieved by intravenous heparin (75 IU/kg) as described in other studies. Femoral artery region was selected to place a 4-French arterial sheath. Under fluoroscopic guidance, the 4 French (1.3-mm diameter) catheter was guided into the ipsilateral internal carotid artery. Chemotherapeutic agents (Melphalan alone or in association) were infused at the pre-established doses in a pulsatile fashion over 30 minutes. After infusion, a confirmatory angiogram was taken again to look for vasospasm. After the completion of the procedure, catheters were removed, femoral sheath was withdrawn and manual compression of femoral artery was done to achieve haemostasis. After 6 hours clinical observation, child was discharged on the day after. IAC was repeated at 4 weeks intervals. During treatment, patients were followed-up at 4 weeks interval. Treatment outcomes were shown in terms of tumor ophthalmoscopic remission, preservation of anatomy of the globe and complications of the procedure. MRI was performed at diagnosis, during treatment (in stage E patients), three months after the last infusion, and annually to evaluate eyeball growth.

A total of 32 eyes from 32 patients were examined and treated. All 32 eyes were treatment-naïve. No family history was referred. 6 cases out of 32 (18.75%) were de novo mutations. ABC classification of RB was used to assess the stage of the disease. Among thirty two eyes, 11 (31.25%) were diagnosed stage B, 4 (12.5%) were stage C, 8 (25%) stage D and 9 (28.12%) were stage E. Most of the lesions were localized at the posterior pole, while the others were localized in peripheral retina and only 1 (3%) was iuxtapapillary. Vitreous seeding, subretinal seeding and both vitreous plus subretinal seeding were present in respectively 5 (15.62%), 3 (9.37%) and 2 (6.25%) patients (Table 1). Mean ADC (Apparent Diffusion Coefficient) at diagnosis was 744±225.95 (range 432-1451). 9 (28.12%) patients underwent IAC with Melphalan alone. 16 (50%) patients received the association of Melphalan and Topotecan. 7 (21.87%) patients received the association of Melphalan, Topotecan and Carboplatin. Associations and dosage of chemotherapeutic agents were decided according to clinical stage, in collaboration with the pediatric oncologist within the GOM (Multidisciplinary Oncology Group) where the cases were discussed and analyzed (Table 1). 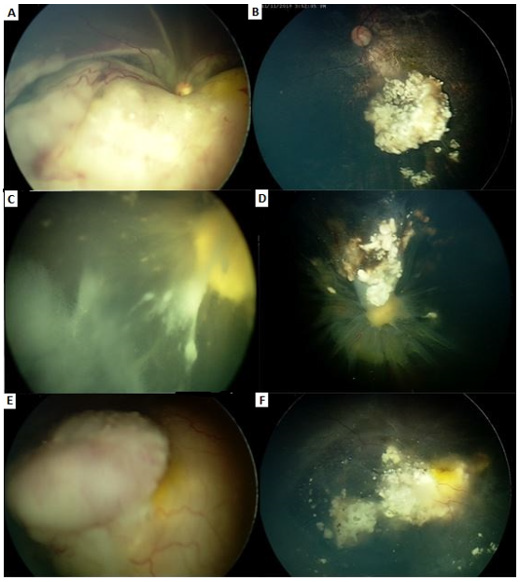 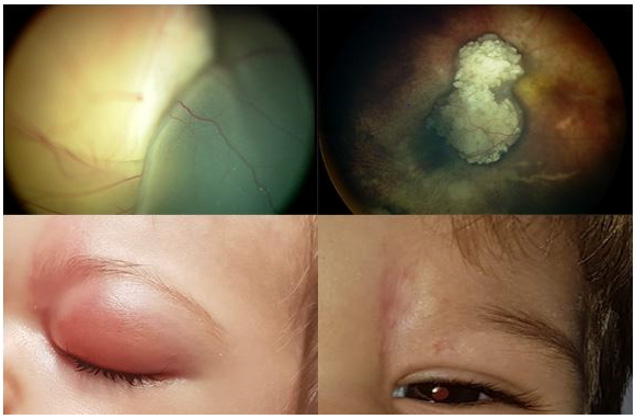 New therapeutic paradigms significantly improved the chances of anatomical and, often, functional preservation of the globe even with advanced stage diseases [7-9]. The introduction of selective Intra-Arterial Chemotherapy (IAC) represents a milestone in the treatment of RB because of its great effectiveness in terms of disease control with relatively low rates of systemic and local side effects. Abramson et al. reported a globe salvage rate up to 85.1% in treatment-naïve eyes according to Kaplan Meir estimate even in advanced disease (Stage D, E), although in this case series IAC was administered in association to focal treatments [10]. Our study confirms the great effectiveness of IAC, with an overall globe salvage rate of 93.75%, even in patients with vitreous and/ or subretnal seeding, with no need of further focal therapies or intra-vitreous chemotherapy. In our case series, vitreous seeding, when present, completely regressed with IAC alone and we have not used intra-vitreal Melphalan in any of these patients. The good response of vitreous/subretinal seeding to IAC has been previously reported in literature. Abramson et al described a 2-year probability of globe salvage of 83% in case of subretinal seeding alone, 64% for eyes with vitreous seeding only, and 80% for eyes with subretinal and vitreous seeding, with the majority of patients receiving 3 or less cycles of IAC with one to three drugs [11]. This globe retention rates may be partially explained by the fact that 61% of the eyes had previous treatments. The lower responsiveness to IAC of previously-treated RB has been described by several authors [11,12] and may be explained by the selection of drug-resistant cell clones. The staging of tumor at baseline has a significant impact on treatment outcomes, although this relation is weaker than that of IVC, with excellent results for group B and C eyes, ranging from 95 to 100% of globe salvage in most of reported case series. Several studies described improved eye salvage rates in the IAC era, especially in advanced intraocular disease, supporting the superiority of IAC over IVC in group D eyes. Most of the patients of our series had stage B to D disease, only 28.12% of treated eyes were diagnosed as stage E. Although the incidence of systemic adverse effects has significantly reduced since the introduction of IAC, a certain number of local reactions have been described including lid oedema, orbital congestion, blephroptosis, ocular motility restriction, myelosupression, vasospasm, alopecia, nausea and vomiting [13-16]. In our study, only lid oedema, orbital congestion, vasospasm and skin hyperaemia occurred. No systemic toxicities were observed.

Choosing the proper therapeutic approach in patients with RB could be challenging, with multiple factors to be considered. If on one hand the main goal remains life salvage, we can’t forget the importance of anatomical and/or functional preservation and the impact of this disease, and of course of the treatment procedures, on the quality of life of the little patient and his/her family. From our experience it comes to light a more favorable prognosis in case of unilateral unifocal RB which may be related to peculiar histological/genetic features, explaining the greater sensitivity to selective chemotherapy delivery. The hope for the future is to customize the treatment protocol basing on the combination of clinical, neuro-radiological and genetic/epigenetic parameters [17] in order to rise the efficacy of therapeutic procedures, reduce overtreatment and its impact on patient’s and parent’s quality of life [18,19].

Purpose: To evaluate the role of intra-arterial chemotherapy (IAC) in the management of unilateral, unifocal retinoblastoma (RB) as a single therapy, associated to neither focal nor systemic adjunctive therapies.

Results: Full regression of the lesion was observed in 30 eyes (93.75%). 2 eyes were enucleated. Ophthalmoscopic remissions type I and III with higher calcific component were achieved. Additionally, neither recurrences nor new tumors appeared during the patient follow-up, which ranged from 10 months to 13 years.

Conclusion: Selective intra-arterial chemotherapy has demonstrated to be highly effective in terms of disease control and anatomical preservation in case of unilateral unifocal disease, without requiring any additional systemic and/or focal therapy.