Incidental Discovery of Dedifferentiated Liposarcoma of the Anterior Mediastinum: A Case Report

Liposarcomas of the mediastinum are uncommon, and those of the anterior compartment are even more rare. The majority of cases are symptomatic on presentation due to mass effect. We report the case of a large asymptomatic anterior mediastinal liposarcoma discovered incidentally during workup for intraparenchymal hemorrhage.

An 83-year-old male with a past medical history significant for prostate cancer status post radical prostatectomy, remote 20 pack year smoking history (quit 40 years ago), dyslipidemia, and atrial fibrillation (on Eliquis) presented to the emergency department with a 4-day history of persistent severe occipital headache. The headache was worse in the mornings and accompanied by vomitus, composed mostly of phlegm. In the emergency department, the patient also presented with right homonymous hemianopsia. CT angiography of the head and neck demonstrated left occipital intraparenchymal hemorrhage with incidental findings of a mass in the anterior-superior mediastinum and small pulmonary nodules in the left upper lobe (Figure 1). CT chest with contrast showed a 13.2 x 6.3 cm anterior mediastinal mass with both fatty and soft tissue components (Figure 2). Multiple pulmonary nodules consistent with metastases were identified in the left upper lobe, left lower lobe, right upper lobe, and right middle lobe. The mediastinal mass was not associated with shortness of breath, hoarseness, or other symptoms of mass effect. Given the chest CT findings, brain MRI with and without contrast was performed to assess for intracranial masses. MRI showed stable left occipital hematoma and multiple old punctate parenchymal hemorrhages without evidence of other intracranial pathology.

The patient was medically managed for the intraparenchymal hemorrhage without complication. On hospital day 3, the patient underwent CT-guided biopsy of the 13.2 x 6.3 cm mediastinal mass. Pathology revealed dedifferentiated liposarcoma of at least intermediate grade with myoid differentiation. Tumor cells stained positive for CD34, CD56, desmin, CD99, vimentin, and scantly positive for S100. FISH analysis confirmed MDM2 gene amplification. The patient was discharged home with outpatient follow-up with pulmonary medicine and hematology/oncology. Tumor staging with PET-CT from skull to thigh showed abnormal fluorodeoxyglucose (FDG) activity in an anterior mediastinal mass at the right side of the level of the ascending aorta, a separate anterior mediastinal soft tissue mass near midline consistent with malignant mediastinal adenopathy, a pulmonary nodule in the anterior right lung, and a small right hilar lymph node (Table 1). The patient was evaluated by cardiothoracic surgery but was not deemed an appropriate candidate for surgical resection of the mass. He was referred to radiation oncology, and decision was made to palliatively radiate the mass with future consideration for systemic therapy. 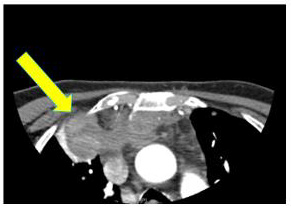 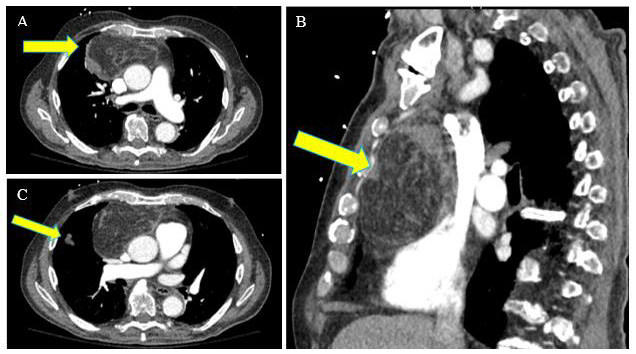 Liposarcomas arise from adipocytic differentiation and are classified by four histological subtypes: myxoid, pleomorphic, well-differentiated, and de-differentiated [5]. De-differentiated liposarcomas (DDLS) comprise 15-20% of all liposarcomas and typically follow an aggressive course with poor response to therapy [5]. DDLS arises from primary origin in 80-90% of cases, with 10% arising from secondary dedifferentiation of well-differentiated liposarcomas (WDLS) [6]. DDLS most commonly occurs in the retroperitoneum or extremities, and rarely in the anterior mediastinum [3]. Regardless of location, the prognosis of DDLS is poor. A retrospective evaluation reported overall survival rates at 5 and 10 years is 57.2% and 40.1% respectively [7]. Prognostic factors include tumor size, grade, histology, metastases, and margin status after resection [7,8]. Mediastinal liposarcomas present with symptoms in 85% of cases, often related to compression of intrathoracic structures [4]. The most frequently reported symptoms are dyspnea, chest pain, and tachypnea [9]. Other symptoms may include dysphagia, wheezing, arrhythmias, heart failure, and superior vena cava syndrome [4,9]. Our case is unique as it was asymptomatic and found incidentally during work up for intraparenchymal hemorrhage.

Alternative systemic therapies are available when surgical intervention is not possible. However, due to the rarity of occurrence, long-term prognostic data of dedifferentiated mediastinal liposarcoma is limited to few case series and small retrospective reviews. DDLS has poor sensitivity to chemotherapy. Anthracyclinebased therapy is the first line, either as monotherapy or in combination with ifosfamide [13,14]. Response rates to systemic therapy are reported to be 12% in WDLS/DDLS, with median overall survival of 15 months [13]. Novel targeted-therapies are emerging with inhibitors of CDK4/6, MDM2, Exportin-1, PI3K, mTOR, and tyrosine kinase [13,14]. The role for these therapies remains under investigation. We present a rare case of a large dedifferentiated liposarcoma located in the anterior mediastinum, found incidentally during workup for intraparenchymal hemorrhage. Although liposarcomas rarely occur in the mediastinum, clinicians should consider this diagnosis on the differential for soft tissue masses of the mediastinum. Importantly, most cases present with symptoms related to compression of intrathoracic structures, although our case was asymptomatic. Surgical resection is the preferred treatment for dedifferentiated liposarcomas, however treatment guidelines for inoperable cases are not well-defined. This case demonstrates the difficulty in diagnosis for dedifferentiated liposarcomas with silent presentation and calls for further study to determine the role of non-surgical interventions.

Informed consent was obtained from the patient for the publication of this case report and accompanying images.

Incidental Discovery of Dedifferentiated Liposarcoma of the Anterior Mediastinum: A Case Report

Liposarcomas of the mediastinum are uncommon, and those of the anterior compartment are even more rare. The majority of cases are symptomatic on presentation due to mass effect. We report the case of a large asymptomatic anterior mediastinal liposarcoma discovered incidentally during workup for intraparenchymal hemorrhage.