Vaginal agenesis is a congenital anomaly that can cause physical and psychosocial problems for women. Many surgical procedures for neovaginal reconstruction have been described in the literature. Using an appropriate vaginal mold is important for a successful surgical outcome. Here, we present an effective solution for neovaginal cavity maintenance involving the use of a customized three-dimensional printed vaginal mold created using thermoplastic polyurethane material.

Vaginal agenesis is one of the most common congenital anomalies of the female genital tract, occurring in 1 out of 5,000 to 10,000 live born females [1]. It may present either as an isolated developmental defect or within a complex of other anomalies and is commonly associated with Mayer Rokitansky Küster Hauser syndrome. Several surgical methods for vaginal reconstruction have been introduced in the literature [2], and various attempts have been made to achieve reconstruction without constriction. Of these methods, McIndoe vaginoplasty is a widely accepted procedure. The correction of vaginal agenesis requires the creation of a neovaginal cavity that is dissected between the bladder and the rectum. After surgical reconstruction of a vagina, long term application of a vaginal mold is necessary to maintain the neovaginal space and to prevent contraction [3]. We present a case of non-syndromic agenesis of the lower vagina in an 18 year old girl and its post-surgical management using a three-dimensional (3D) printed thermoplastic polyurethane (TPU) vaginal mold.

The patient had a temperature of 38.2 ℃ with an elevated C-reactive protein (CRP) level of 16.92 mg/L. Laboratory tests for hormonal abnormalities showed levels that were lower than the normal limits. She had a normal 46,XX chromosome pattern. Abdominal computed tomography and magnetic resonance imaging (MRI) revealed no vagina, and diffuse collection of hemorrhagic fluid was observed in the cervical canal and uterine cavity, which extended up to the umbilical level (Figures 1B & 1C). The lower vagina was not fully developed, and the upper vagina and uterine body were hypoplastic. The right ovary was identified on sonographic examination, but the left ovary was not found. The perineum was obliterated by a membrane (Figure 1D). She had breasts and pubic hair with prepubescent features (Figure 1A); however, she had not had her first menses. She had a medical history of growth hormone treatment for small stature between ages 7 and 14 years. A brain MRI was obtained during that treatment, and no structural abnormalities were noted. Initially, antibiotics were prescribed to control infection; however, her CRP level increased to 18.51 mg/L, and the patient complained of severe abdominal pain (Numeric Rating Scales 8-9). It was concluded that the patient needed immediate surgical intervention for the drainage of the pus in the uterine cavity and to correct the abnormal vaginal structure. The perineal membrane structure was incised in a ‘+’ shape under sonographic guidance. Approximately 1000 mL of foul-smelling yellow fluid was drained (Figure 1E). There was no visible lower vagina, and the upper vagina was pulled downward and sutured to the perineal incision site with 3-0 Polysorb sutures to create a hymenal opening. Subsequently, a drainage duct was inserted for additional drainage of fluid from the uterus (Figures 1F & 2A). 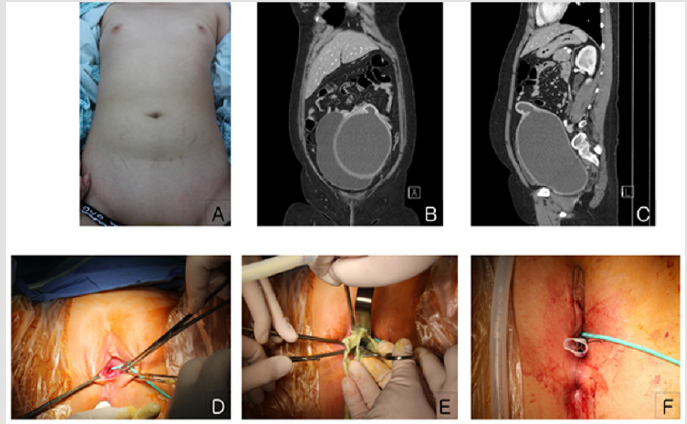 C. Initial sagittal CT scan shows that the hematometrocolpos was distended at the level of the umbilicus.

D. Preoperative view of the perineum. The opening of the vagina cannot be seen because it is hidden by the membrane.

Three days after the procedure, her CRP level had decreased to 5.5 mg/L. The drainage duct was removed, and a vaginal mold was made to prevent future vaginal stenosis. A condom was inserted into the neovagina to create a mold, and it was filled with alginate (alginic acid, one of the impression materials used for shaping teeth before dental procedures such as placement of crowns or implants). We were then able to easily obtain her vaginal length and diameter. Next, using a 3D printer, a customized mold was created. This mold, with a diameter of 1.5 cm and a length of 10.5 cm, was created using an ALMOND 3D printer (OpenCreators, South Korea) (Figures 2B,2D & 2E). The patient was instructed to use the mold with lubricant during normal activities and during sleep. She had difficulty voiding during the first few days, but this improved after 4 days. She was discharged 10 days postoperatively. The patient was followed up every 6 months, and an additional 2cm diameter mold was made for post vaginoplasty management (Figures 2F & 2G). She did not show any vaginal stenosis (Figure 2C) and did not complain of discomfort. We plan to continue management with this mold and follow up with this patient.

A. Immediately after surgery; a Penrose drain, with a diameter of 12 mm, and two straws inside the drain.

Vaginal agenesis, also known as Mayer Rokitansky Küster Hauser syndrome or Müllerian agenesis, is a rare congenital disorder that can be accompanied by renal agenesis, cardiac anomalies, or skeletal anomalies. The uterus may be partially developed or entirely undeveloped. Vaginal agenesis is treated both surgically and non-surgically. One treatment goal is to enable normal sexual activities. In the United States and the United Kingdom, vaginal dilation is considered to be the most important treatment for vaginal agenesis. In 2013, the American College of Obstetrics and Gynecology recommended that vaginal dilation be the first line of treatment for this condition [4]. This procedure involves the creation of a neovagina with a McIndoe vaginoplasty, which involves lining the vaginal space with a skin graft, followed by the application of a mold to prevent constriction of the newly created vaginal canal. A dilator is generally used daily for 3 months, then only nocturnally for the next 6 months. The success rate of this procedure is around 80% [5]; inflammation of the skin graft, infection, hematoma, and fistula formation are possible causes of failure. The ideal material for the vaginal mold has not yet been established; numerous types of material have been reported without any proven superiority [5]. Soft material is often used for packing immediately after surgery owing to its advantage of enabling bleeding control by applying pressure. The development of a vaginal mold by packing povidone-iodine gauze into a condom has been previously reported [6]. Hard material is recommended to be used beginning 1 week after surgery and continued until regular sexual activity is initiated. Nontoxic polypropylene material is often used to make hard vaginal molds because it is lightweight.

In 2014, Manu Rathee reported successful treatment without complications using a hollow vaginal stent made by coating a wax scaffolding with acrylic [7]. The authors considered that a mold that could be easily manufactured while accurately reflecting the anatomy of the patient would help obtain good results. We thought that 3D printing was most suitable for this purpose, and thus, we selected TPU, which is a flexible, abrasion-resistant, thermoplastic material that allows easy printing and offers good durability. We created the vaginal mold using the ALMOND 3D printer manufactured by OpenCreators Cooperation. This 3D printer uses the fused deposition modeling method, which involves melting a thin thread like thermoplastic and depositing it in a thin film to be printed. The operation of this printer is simpler than that of other 3D printers. In addition, it is easy to manufacture vaginal molds using this approach because of its low price and widespread accessibility. Currently, 3D bioprinting in the medical field is still in its early stages. A customized pessary made with 3D printing technology has been reported for gynecologic use [8,9]. In the present case, we successfully implemented postoperative management using a vaginal mold developed using 3D printing. There are fewer concerns of rejection, degradation, and material biomimicry with TPU, and it can be easily individualized and is safe for semi-permanent use. Further, the mold can be used by the patient hygienically without the inconvenience of putting it in and taking it out.

Our vaginal mold had two advantages. First, we were able to sequentially increase the size of the mold on an outpatient basis, and it was still customized for the patient. Second, the mold was lighter and thus more comfortable compared to the readymade molds. However, there were some disadvantages. Although TPU has better shock absorption and durability compared to other materials, it was damaged during use in our patient’s case. Furthermore, the material was not antibacterial, leading to repeated vaginitis infection during the course of the use of the mold. Future considerations would include using antibacterial materials for the mold. This report is the first to suggest using a 3D printer to create molds to maintain vaginal dilation after the creation of a neovagina. This case report demonstrates how a 3D-printed vaginal mold can aid in the maintenance of the vaginal structure in a patient with a partially developed vagina. Successful neovaginal reconstruction was achieved using a 3D printed vaginal mold, and this approach can be applied for patients with vaginal agenesis and stenosis and can be used as a novel method for maintaining the neovaginal structure without affecting the patient’s quality of life.

COVID-19 Pandemic has surfaced several needs in the health care delivery system worldwide. The clinical interactions are turning towards telehealth and remote interactions due to the fact of contracting infection. It is vital to understand underlying barriers and facilitators of telehealth to improve access and utilization of needed healthcare. The disparities in health care utilization already exists among certain chronic conditions group, and pandemic has significantly affected the way people access healthcare services. The paper identifies factors affecting access to healthcare, barriers, and facilitators of healthcare delivery system, and proposes a framework to study telehealth utilization. The call for action paper proposes research methodology at structure, process and outcome level of healthcare delivery system to identify and resolve factors impacting telehealth utilization.