On the Function of Piriformis Muscle in Relation to Piriformis Syndrome

Understanding the function of piriformis muscle plays an important role in the procedures of diagnosis and treatment in the piriformis syndrome which is observed as a result of the variations, hypertrophy, or strain of the muscle. Making the differential diagnosis with the anamnesis and physical examination is important in the oftenmisdiagnosed piriformis syndrome. At this point, the functional anatomy of the muscle gains importance. In our study, we tried by performing a literature search and examining anatomy textbooks to compile all the functions of this muscle whose function is defined in various ways. In this regard, we hope this study can be used clinically as a guide for identifying movements that can cause pathology, taking precautions against such scenarios and for muscle test, stretching and strengthening exercises for the muscle.

Piriformis is the largest muscle among the deep short external rotators of the hip and a functionally important muscle which attaches two joints, sacroiliac, and hip joints [1,2]. In clinic, the pathologies that occur in this muscle which has important neurovascular adjacencies in gluteal area cause piriformis syndrome characterized with hip and waist pain in sitting position or during hip movement [2-4]. While this rarely seen syndrome can easily be diagnosed via anamnesis or physical examination, it is often misdiagnosed as lumbar discopathy. Piriformis syndrome should be considered in differential diagnosis of non-discogenic sciatalgia [3,5]. In literature, it is observed that piriformis muscle is discussed superficially, which, in fact, must be clinically welldefined and has many functions. Therefore, in our study, we tried to compile all functions of the muscle in literature, with the hope of it becoming a guide in clinical diagnose and treatment.

Starting from the S2-S4 level of the pelvic surface of the sacrum, the gluteal surface of the ilium that is close to the posterior inferior iliac spine, the sacroiliac joint capsule, Sacro tuberous ligament, exiting pelvis, it advances through lateral by dividing greater saciatic foramen in two to form suprapiriform and infrapiriform foramen [2,6,7]. It terminates in femur, in the medial of upper side of greater trochanter. Its tendone often merges with gluteus medius muscle tendone, either in conjunction with gemelli muscles and obturator internus muscle joint tendone or by itself [2]. Important neurovascular structures pass through infrapiriform foramen, including sciatic nerve [2]. In literature, case examples with variations of no or two piriformis have been reported [8-11]. There are also variations of sciatic nerve dividing into branches and variations of their adjacency with piriformis. Sciatic nerve or one of its branches is observed to pass through the muscle in 7-21% of the examined poplutaions.

This adjacency causes nerve compression and results in piriformis syndrome [4,12,13]. Apart from these anatomical variations, piriformis syndrome may occur due to a sudden, powerful internal rotation which may cause chronical weak body mechanics, hypertrophy and myofascial trigger point syndrome caused by excessive use of the muscle, and acute muscle strain. These factors cause sciatica pain caused by irritations of sciatic nerve which approaches piriformis muscle during hip movements [4,5]. Stretching exercises, dry needling, kinesiological taping, soft tissue massage techniques are often used to reduce nerve compression and to achieve symptomatic relief in treatment [13, 14]. The function of the muscle must be clearly comprehended for the best treatment.

The main function of piriformis, one of the short external rotator muscles of femur, is to provide external rotation while femur is in extension and its secondary function is to provide abduction while femur is in flexion [15-17,2]. The abduction of femur prevents falling by transferring bodyweight to the related side during the stance phase of walking [16]. Piriformis muscle might also help starting the hip extension [15,17,18,19]. In one study, the percentage torque according to total hip torque of piriformis muscle in each axis was calculated and found to cause 35% extension, 56% abduction, 75% external rotation relatively [19]. An electromyography study found that the maximum activation of piriformis muscle was during resistive hip extension. The maximum activation in eccentric phase was observed during single leg bridge exercise. The other exercises that cause high muscle activation in the study are heel squeezing in the prone position and abduction moves while leg is in external rotation in side-lying position. The high activation of muscle during moves like exercises such as single leg bridge, heel squeezing in the prone position that cause static external rotation ensures hip stabilization and prevents internal rotation [20]. Increased piriformis strength was observed in addition to hip external rotation increase by wight transfer while climbing down a ladder in patients with pre- and post-operative femoral acetabular impingement syndrome, compared to healthy individuals [21]. In the flexion of the hip over 70°-90°, piriformis muscle creates internal rotation torque in horizontal plane and its function is observed to change [17,19,22].

It is reported that preventing rotation helps the abduction of femur and that femur acts as a hip abductor in 90° flexion and as an internal rotator in above 110° flexion [18]. This internal rotation occurs in pathophysiology of knee-bent walking observed in cerebral palsy [22]. It also tilts pelvis down laterally and posteriorly by pulling the sacrum downward toward the thigh [15]. While sacrum is stable, piriformis muscle brings femur to external rotation, abduction, and flexion, and while femur is stable, it brings pelvis to extension with bilateral contraction and causes pelvis to do internal rotation with unilateral contraction [23,24]. While hip goes from external rotation to internal rotation in the stance phase of walking, piriformis muscle extends and then stretches with lateral tilt of pelvis. It is thought to be a stretch reflex resulting in contraction followed by a second contraction in swing phaseto help external rotation. Because piriformis shows two contractions, it is observed to be liable to hypertrophy [25]. In a study which compares walking at different slopes, more power was observed to emerge in piriformis at high slope than at low slope [26]. Piriformis, with other extensor rotator muscles, pull femur at different angles and act as a functional muscle. These muscles are regarded as cuff muscles of the hip and helps stabilize the head of femur at acetebulum [18,23,24,27]. These muscles have an importance as postural muscles rather than creating power by providing pelvis with control over stable femur [27]. 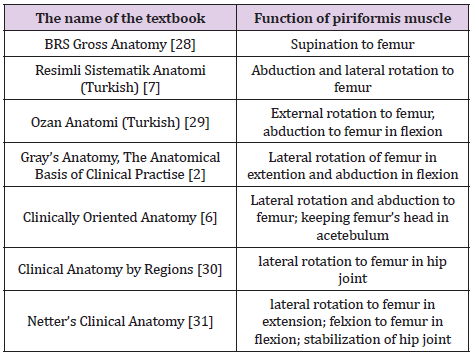 Table 1: Function of piriformis muscle according to anatomy textbooks.

It helps stabilize the joint by preventing femur’s internal rotation during walking [18]. Piriformis muscle has a secondary function in stabilizing this joint with iliopsoas muscle, by clinging to sacroiliac joint capsule or its boundaries [22]. It is also regarded as a powerful stabilizer of sacroiliac joint [18]. It helps sacroiliac joint’s stabilization while femur is stable in situations such as lifting weight, stance phase of walking [1]. Piriformis muscle provides balance between sacrum- ilium, sacrum- vertebra by creating anteroposterior movement of sacrum. Iliopsoas muscle provides balance between hip, pelvis, and lumbar vertebra by clinging to lesser trochanter in the anterior. With obturator muscles joining these muscles, they create a web and help thorax, lumbar vertebra, pelvis, sacrum connect to lower extremity [27]. While various functions of piriformis muscle are defined in literature, its main function that is assessed in anatomy textbooks is its role to make femur do external rotation. In addition to external rotation, it also plays role in abduction and stabilization of hip joint. The way the anatomy textbooks we examined assess the function of piriformis muscle is shown in (Table 1). It was observed that not all functions of the muscle were assessed in all of the textbooks, and the changes in femur according to its position were not assessed even the same functions were stated. Also, there are textbooks that use different terminology such as “supination to femur “and that show external rotation in the second place.

The obtained information shows that piriformis muscle has functions such as providing abduction in hip flexion, internal rotation and triggering extension along with its main function of providing femur’s external rotation while the hip is in extension. In addition to that, considering its role in pelvis lateral tilt and posterior tilt and the fact that it helps provide stabilization of both sacroiliac and hip joint show that it is one of the posture muscles and that it might play an active role during tasks of walking, climbing up and down a ladder, climbing up a hill. We hope that the information about these functions of the muscle will help explaining many pathologies related with the hip, especially the piriformis syndrome, making the differential diagnosis, and choosing the most proper position of the hip for muscle test and muscle related treatments. In this regard, we argue that all functions of piriformis muscle should be assessed in textbooks of fundamental anatomy education. We also think that the terminology used in these textbooks should be standardized in order to make it easier to comprehend its function. Furthermore, advanced studies should be performed for defining the functions of piriformis muscle in clinical context.

On the Function of Piriformis Muscle in Relation to Piriformis Syndrome

Understanding the function of piriformis muscle plays an important role in the procedures of diagnosis and treatment in the piriformis syndrome which is observed as a result of the variations, hypertrophy, or strain of the muscle. Making the differential diagnosis with the anamnesis and physical examination is important in the oftenmisdiagnosed piriformis syndrome. At this point, the functional anatomy of the muscle gains importance. In our study, we tried by performing a literature search and examining anatomy textbooks to compile all the functions of this muscle whose function is defined in various ways. In this regard, we hope this study can be used clinically as a guide for identifying movements that can cause pathology, taking precautions against such scenarios and for muscle test, stretching and strengthening exercises for the muscle.