Outcomes in acute pulmonary embolism (PE) vary substantially depending on the presences or absence of hypotension [1]. In massive, High-Risk PE complicated by cardiogenic shock or the need for cardiopulmonary resuscitation, in-hospital mortality rates are 25% and 65%, respectively [2,3]. Intermediate Risk PE represents a group characterized by the presence of right ventricular dysfunction (RVD) without systemic hypotension [2,4]. Estimates of in-hospital mortality for such patients have been as low as 2-3% as reported in a recent multicenter trial [5]. Despite the overall low mortality rate, 5-25% will demonstrate hemodynamic and clinical worsening requiring hemodynamic support and/or rescue thrombolysis [5,6]. Substantial variability exists in clinical outcomes in Intermediate Risk PE. In patients with RVD on echocardiogram combined with elevated troponin I mortality rates have been reported between 8-15% [7,8]. Patients with RVD and concomitant lower extremity deep venous thrombosis (DVT) have a PE-related mortality of nearly 20%, approximating that of massive, High-Risk PE [7]. In addition to mortality, persistent RVD and the development of chronic thromboembolic pulmonary hypertension (CTEPH) is substantially higher following a submassive Intermediate risk PE [9-12].
Patients who have an initial pulmonary artery systolic pressure over 50 mmHg are at significant risk [13,14]. While systemic thrombolysis has been shown to reduce mortality in High-Risk PE [15], use in Intermediate Risk PE has been limited due to major bleeding complications, including intracranial hemorrhage (ICH) [5]. Recently, catheter-directed ultrasound-accelerated thrombolysis (USAT) has been developed as a treatment option for Intermediate Risk PE [4,16-24]. USAT has been shown to rapidly reverse pulmonary hypertension (PH) and RVD by significantly reducing pulmonary clot burden without major bleeding complications [4,16-24]. Additionally, there is increasing evidence that early clot reduction improves hemodynamic parameters and reduces persistent RVD [9,18,19]. Despite increasing clinical experience with USAT, variability exists in thrombolytic dosing and duration of therapy [4,16-24]. The purpose of this retrospective, single-center study, is to further describe the use of USAT, utilizing a lower dose thrombolytic protocol than previously reported and its impact on pulmonary artery pressure, clot burden and safety in high Intermediate Risk PE. In addition, we define high Intermediate Risk PE as those at greatest risk for hemodynamic deterioration, death, or the development of CTEPH.

A retrospective study of patients admitted with high Intermediate-Risk PE treated with USAT between July 2012 and February 2016 was performed. The study was conducted at a single academic center with approval from the Lankenau Medical institutional review board. (IRB# F/N-R14-3414L). During the study period, 52 patients (27 males) were treated with USAT utilizing the EkoSonic Endovascular System (EKOS®) (EKOS Corporation, Bothell, Washington, United States of America) with recombinant tissue plasminogen activator (r-tPA) and concurrent intravenous (IV) unfractionated heparin infusion. Informed consent was obtained in all patients prior to undergoing USAT. PE was diagnosed in all patients by computerized tomography (CT) angiography with symptom onset < 2 weeks. Intermediate Risk PE was defined as the presence of RVD without systemic hypotension [2,4]. RVD was detected utilizing electrocardiogram, cardiac biomarkers, CT scan, and transthoracic echocardiography.
High Intermediate Risk PE was considered those at greatest risk for acute hemodynamic deterioration, death or subsequent development of CTEPH (Table 1). All Patients had Right ventricular dilation on CT (Right Ventricular/Left Ventricular (RV/LV) maximum diameter ratio >0.9 on standard axial views. In addition, by our protocol, patients had elevation of troponin I (>0.05 ng/ mL) and/or B-type natiuretic peptide (>90pg/ml) and a proximal DVT or estimated right ventricular systolic pressure (RVSP) on echocardiogram >50 mmHg. Lower extremity Doppler ultrasound was performed in the majority of patients to exclude deep venous thrombosis (DVT). If lower extremity DVT was present, retrievable inferior vena cava (IVC) filter was placed at the discretion of the treating physician. Patients were deemed candidates for USAT if they met clinical criteria for acute high Intermediate risk PE and had evidence of thrombus within the main or lobar pulmonary arteries on CT. The Department of Interventional Radiology performed USAT. All patients were admitted to the medical intensive care unit upon diagnosis and during USAT treatment.

All patients were treated with the use of EkoSonic MACH4e Endovascular System (EKOS®). The EKOS® system consists of a removable microsonic device that transmits microsonic energy into the clot. The insertion of the EkoSonic Endovascular System was performed under aseptic technique with continuous cardiac monitoring. Following central venous access, IVC venography was performed to ensure no thrombosis was present. IVC venography was incorporated in our protocol in 2015. Subsequently, left, right and main pulmonary arterial pressures were obtained. Selective left and right pulmonary arteriography was performed to determine clot burden and pulmonary arterial perfusion. The main and lower lobe pulmonary arteries were considered for catheter insertion only. Bilateral device placement was performed when emboli were located in both main or proximal lower lobe arteries. A continuous infusion of r-tPA was then initiated at 0.5mg/hr through each catheter for bilateral treatments (1.0mg/hr for unilateral catheters). After successful device placement, patients were transferred to the medical intensive care unit for continuous monitoring. Treatment was continued for up to 24 hours, at which time the EKOS® devices were exchanged for angiographic catheters, and repeat pulmonary arteriography was performed in the interventional radiology suite to reassess clot burden, pulmonary arterial perfusion, and pulmonary arterial pressures. The introducer sheath(s) were removed, and hemostasis was obtained by manual compression.

IV unfractionated heparin was utilized in all patients prior to, during, and immediately following USAT. Prior to undergoing USAT, unfractionated heparin was administered utilizing a standard weight-based nomogram. Activated partial thromboplastin time (aPTT) was monitored with a therapeutic target range of 68-101 seconds. During USAT, a low dose unfractionated heparin protocol was instituted. The rate of heparin infusion was adjusted to achieve and maintain an aPTT between 40-60 seconds. Following catheter removal, the standard weight-based nomogram was resumed, targeting an aPTT of 68-101 seconds. Subsequent anticoagulation was left to the discretion of the treating physician.

During the study period, 52 patients (27 males) underwent USAT for high Intermediate Risk PE. Patient characteristics are outlined in Table 2. 30 patients were unprovoked PE and 9 were provoked post surgeries and 11 patients had a diagnosis of cancer and 2 were on hormonal therapy. 11 had a history of prior VTE. The mean RV/ LV ratio on the CT was 1.52 + 0.36. 48 patients had elevated cardiac biomarkers (Troponin I and/or B type Natiuretic Peptide). The 4 patients who did not were treated because of elevated PASP>50 and +DVT. 38 patients had initial RVSP>50 on initial echocardiogram. Lower extremity DVT was identified in 36 patients on the day of diagnosis by Ultrasound. Of these, 30 patients had a retrievable IVC filter placed. 30 patients met all 3 criteria listed in Table 1, and only 2 patients met 1 criteria (+troponin, criteria #2). 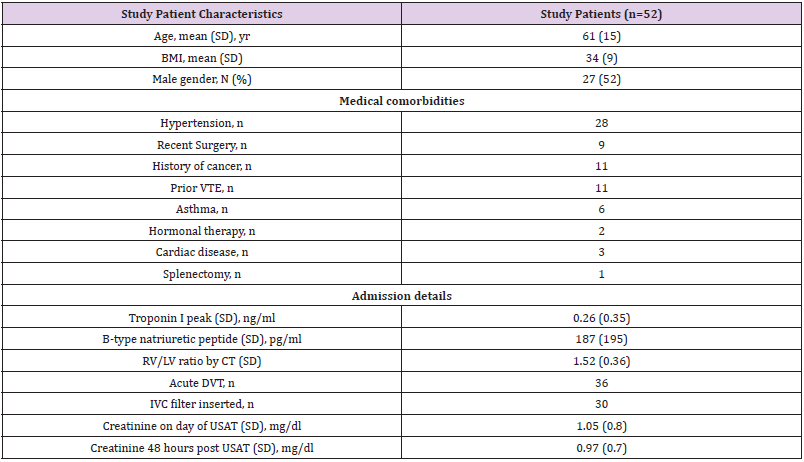 Bilateral catheters were utilized in 49 of 52 patients. Recombinant t-PA was infused at 0.5mg/hour/catheter in patients undergoing bilateral USAT (1.0mg/hour with unilateral USAT). The average r-tPA dose in our cohort was 22.1 + 4.9mg. The average duration of USAT was 22.1 + 4.9 hours. All patients received concurrent IV unfractionated heparin. The mean aPTT during thrombolytic infusion was 50.0 + 13.9 seconds. Goal aPTT (40- 60 seconds) during thrombolytic infusion was achieved in 58 % (n=30/52) patients.

Miller scores were computed for 50 of 52 patients. One patient had a non-diagnostic pulmonary arteriography and another had imaging via carbon dioxide digital angiography, therefore she was excluded. There was a statistically significant decrease in the Miller score immediately following USAT. The Miller score decreased 55.0% (mean 19.7 + 3.8 to 8.9 + 4.7; p value < 0.0001).

No procedural related complications occurred. There were no major or minor bleeding complications. No patient received blood transfusions.

No source of funding.

Lee W Greenspon and Joseph Bonn were co-investigators for the OPTALYSE (NCT02396758) Investigational Research Study supported by the BTG Corporation.