There is evidence that healthy employees are more efficient and that an ill workforce costs the country more [1]. On two fronts, cost arises for SLPs: not only in respect to the number of capable, effective workers but also with respect to the impact a reduced workforce has on the health and productivity of persons with communication and swallowing challenges [2]. It’s a difficult job, but if you like complexities and challenges, a career as a speechlanguage pathologist may be a good fit for you [3]. It has long been acknowledged that job satisfaction is critical for therapists who work with communication disorders. Individuals who are happy in their jobs are more likely to be efficient, do quality work, report success, stay in their jobs, and encourage others to follow in their footsteps [4]. Across occupations, job satisfaction is strongly and indirectly related to stress and emotional exhaustion [5]. According to John Locke, job satisfaction is a pleasant emotional state caused by the assessment of one’s employment as allowing or attaining value accomplishment. It was noted that job dissatisfaction was characterized as an emotionally uncomfortable condition coming from an evaluation of one’s job as irritating or as being incompatible with the accomplishment of one’s own job values or as being a net loss of job worth. Cranny and his colleagues found that people react to various perceptions of what they wish to get as opposed to what they really receive [6].
A great amount of effort and energy is invested in the field of speech-language therapy for evaluating the quality of life and treatment of persons served. Many service sector workers give little weight to the quality of life of those working as speech-language pathologists (SLP). Current research seems to imply that employees today place the most importance on things like salary, lifestyle, and job stability. The study conducted by Ruggero, McCabe, Ballard, and Munro (2012) found that the average yearly turnover rate for academic staff in Nigerian public hospitals was 16.18 percent from 1990 to 1997 [7]. According to Felton (1998), certain professions, such as SLPs, who engage with special communities and persons with impairments, are more likely to acquire job dissatisfaction and tiredness [8]. SLPs’ job satisfaction has been linked to a lack of technical supports, a significant caseload and work, and a lack of money. Apart from an increase in years-at-position, age was found to have a significant strong connection with SLPs’ high satisfaction ratings [9]. As job satisfaction is so important in terms of performance and employee engagement, there has been a rise in research in this area across a wide range of occupations. Speechlanguage pathology is a field that can be found in a wide range of settings. SLPs can work in numerous settings, such as schools, hospitals, care facilities, rehabilitation centers, and private practice [10]. To date, the majority of studies on SLP work satisfaction have been conducted in school settings. As a result, the aim of this study was to assess SLP work satisfaction in a variety of settings and analyze the disparities in replies. In conclusion, the study that has been undertaken on Pakistani speech and language pathologist job satisfaction working in different employment sectors. The following eight demographic factors were of concern: age, level of education, amount of work experience, industry, workplace, and kind of employment.

It was a cross-sectional study. A mail survey methodology was employed. One hundred and seventeen full-time and part-time practicing SLPs in hospitals and other sectors residing in Pakistan were randomly selected. Participants rated the Job Satisfaction Survey nationwide. To quantify total, intrinsic, and extrinsic job satisfaction, a survey questionnaire was sent to all the therapists. Included as part of the survey package was a 15-item Professional Satisfaction Scalle (PSS). Respondents were asked to rate their satisfaction on a five-point Likert-type scale, from 1 (very unhappy) to 5 (very satisfied) (highly satisfied). Data were statistically evaluated by utilizing descriptive statistics, as well as analysis of variance was applied to see whether there were significant differences. William Blank (1993) developed the PSS to investigate the things that make an employee feel satisfied or dissatisfied in their jobs.

About the researchers’ survey, 67% of the university speech therapists responded. The demographics of the participants can be seen in (Table 1), which includes gender, age, level of qualification, length of experience, and where they work. (Table 1) showed that most of the participants were 25 to 30 years old, having a degree of bachelors and masters in speech-language pathology. It was also shown in the table that most of the participants had in the initial stages of their career experience as a speech pathologist, and most of them worked in special care centers. In addition to this, most of the participants have a normal workload, and their working hours consist of 6 to 10 working hours per week. Furthermost of the participants worked in the inpatient care department and had full-time jobs. For the purpose of viewing job satisfaction in different working conditions one way, ANOVA was run to identify the job satisfaction level of speech therapists working in different organizations as shown in (Table 2). One-way ANOVA reveals nonsignificant mean differences across the categories of workplaces of speech therapists i.e., hospitals (M = 38.25, SD = 6.40), clinics (M = 37.72, SD = 7.68), special need centers (M = 36.76, SD = 6.96), and schools/universities (M = 37.44, SD = 6.86) on scores of Job Satisfaction (F = .257, p > .05). So, it is found that organization doesn’t make any difference in the context of job satisfaction. 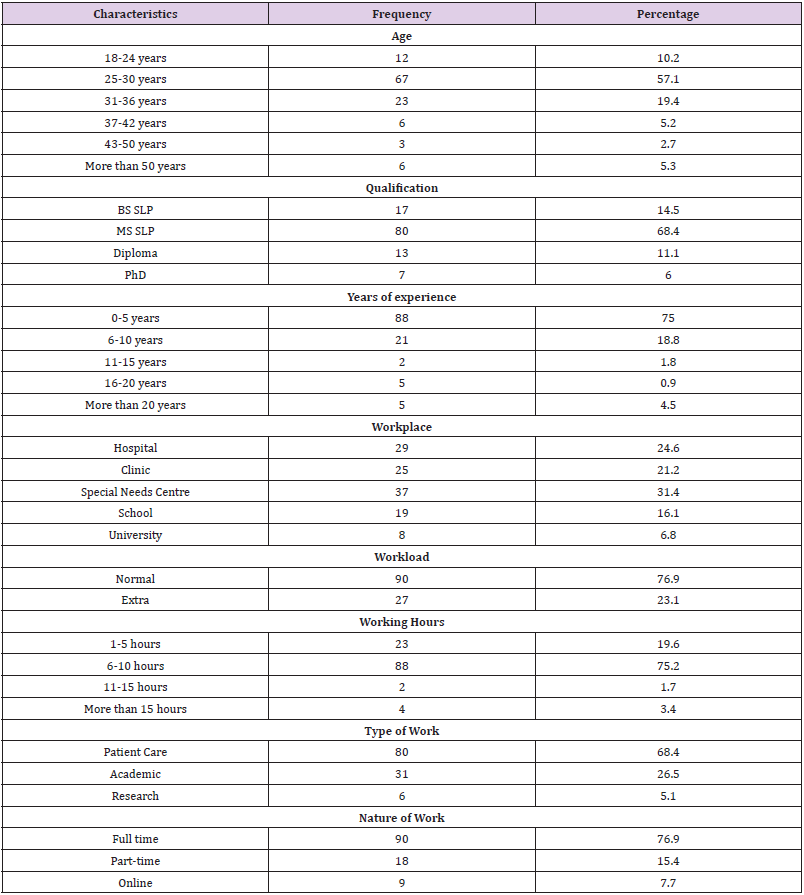 Finally, there is a clear need for a better understanding of the influence of several risk variables on SLP satisfaction and wellbeing. The demand for further research in which theory is a central consideration and longitudinal data is required to discover the link between a predictor and an outcome is pressing.

Max Rehab & Physical Therapy Centre Islamabad, Pakistan has provided technical sport to the research project. There was no funding for this research from any source.

There is no Conflicts of interest or competing interests among authors.

Ethical approval letter has been taken from REC committee.

All authors are mutually agreed for publication.

Availability of Data and Material

The data that support the findings of this study are available from the corresponding author upon reasonable request.