Background: The epidemiological data of cancer cases provides vital scientific information to evaluate and estimate the burden of the disease in Libya.

Cancer is a collection of disorders defined by uncontrolled cell growth and spread. Cancer is becoming more common over the world as a result of an aging population and environmental conditions [1]. Cancer is becoming more prevalent in Africa as the population grows and develops, as well as the increased prevalence of risk factors associated with economic transition (such as smoking, alcohol, obesity, junk food, physical inactivity, and reproductive behaviors) and certain infectious agents that play a role in disease etiology [2]. According to the United Nations, Africa’s population is expected to grow from 1.03 billion to 1.63 billion between 2010 and 2030, with a growth rate of around 60%, and by 90% for those aged 60 and over, as the population in this age group is expected to grow from 55 million to 103 million, on the other hand, this is the age when most tumors occur [2]. The global burden of cancer continues to rise, owing mostly to population aging and expansion, as well as cumulative exposure to carcinogenic activities, particularly smoking, in economically developing countries. Despite the fact that cancer incidence in the developing world is around half that in the developed world, overall cancer mortality is often comparable [3,4].

Cancer survival is worse in underdeveloped nations, most likely due to a combination of late-stage detection and limited access to appropriate and standard health care [5]. Accurate data is required for proper strategic planning and strategy to scaling up health care services such as screening, prevention, early diagnosis, and treatment. As a result, cancer registries were established, which are used to determine the incidence and prevalence of cancer as a first step toward developing a national cancer prevention and treatment plan [6]. Because of a lack of cancer monitoring and screening methods, comprehensive studies in the field of cancer epidemiology are limited in developing nations. Due to the lack of a national cancer registry, the Libyan picture is further complicated by the lack of a defined system for capturing data and restricted monitoring for the formation of strategic plans for the health care program [7-9]. Libya was separated into five sections when the Ministry of Health began implementing a cancer registry program in 2007 (Figure1A). 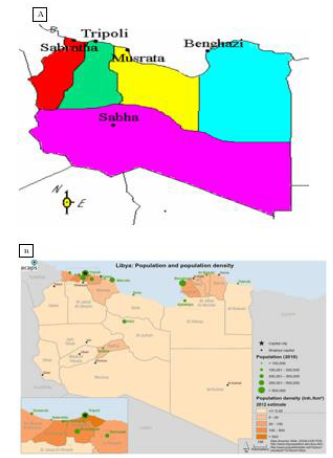 Figure 1: General map of Libya; A: the major regions of cancer registries. B: the Libya population density (2015).

The details of this registration software are shown in (Table 1). However, because the majority of these registers are still in their infancy and incomplete, Libya still lacks a population-based national cancer registry [7,8]. In Misurata, a hospital-based cancer registry was established in 2008, and the first report on hospital data from that year was published [10]. The analysis estimated the scope of the cancer problem in Libya’s central region, which has a population of more than a million people [1]. The current study’s goals are to assess some demographic data, cancer rates, and prevalence based on the hospital cancer registry at the National Cancer Institute- Misurata. The research could help to improve cancer control in the country as a whole. This is the first-time statistics on the prevalence of cancer in Libya’s central area has been published. 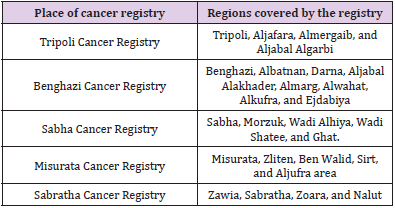 The study was approved by the Ethical Committee of the NCIMisurata. All personal identifiers were stripped from the data and only medically significant parameters were analyzed out.

The data of cancer incidences was obtained from the patients’ records of the department of Medical Oncology at the NCI-Misurata/ Libya. All patients were diagnosed at the same institute during the period from January 1, 2016, to December 31, 2016.The patients were diagnosed through various procedures. The histopathological examinations and radiological diagnosis of cancer patients were included in this study; however, uncertain diagnosed cases are excluded. The collected data from the patients’ medical records included age, gender, city, and types of cancer. All cancer cases were coded using the International Classification of Diseases (ICD) [12]. Duplicate entry checking was done by comparing the data obtained from the department of pathology and laboratory for all cancer cases with that received from the clinical units of the hospital.

Microsoft Excel 2007 was applied to drawn graphs and to evaluate relationships between variables. 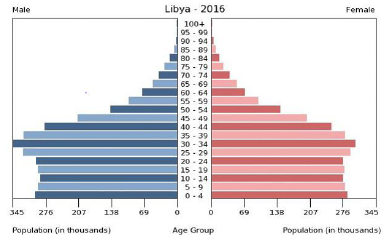 Figure 2: Pyramid pattern of the Libyan resident population (2016) according to age and sex [11].

Figure 3: Distribution of cancers in NCI-Misurata 2016 (n=974) according to the gender of patient.

Figure 4: The most common types of cancers in NCI-Misurata 2016.

While women in general constitute the majority of cancer patients, this is due to the high prevalence of breast cancer among them. As the incidence of breast cancer peaks at the age below fifty (Figures 5 & 6 and Tables 2 & 3), the average age of cancer incidence among women is lower than the average age for men. On the other hand, prostate and lung cancer in males, both are occurred in male after the age of sixty (Figures 5 & 7 and Table 3). This reflects the nature of cancers affecting both sexes, while male primary malignancies tend to occur at a later age, and female primary cancers occur earlier. Another potential factor is that men tend to hide symptoms and delay seeking medical care, especially in developing countries [4,8]. In the present study, the most common cancers in males were colorectal (18.3%), lung (18.3%), prostate (12.6%), lymphoma (9.6%), leukemia (5%) and brain & CNS (4.1%). 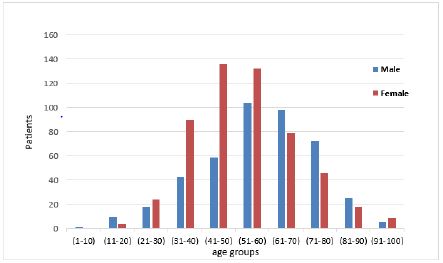 Figure 6: Age distribution of breast cancers in males and females. 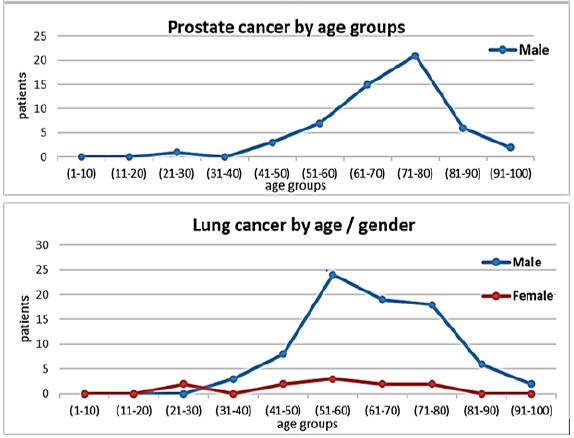 Figure 7: Age distribution of prostate cancer in males, and lung cancer in both males and females. 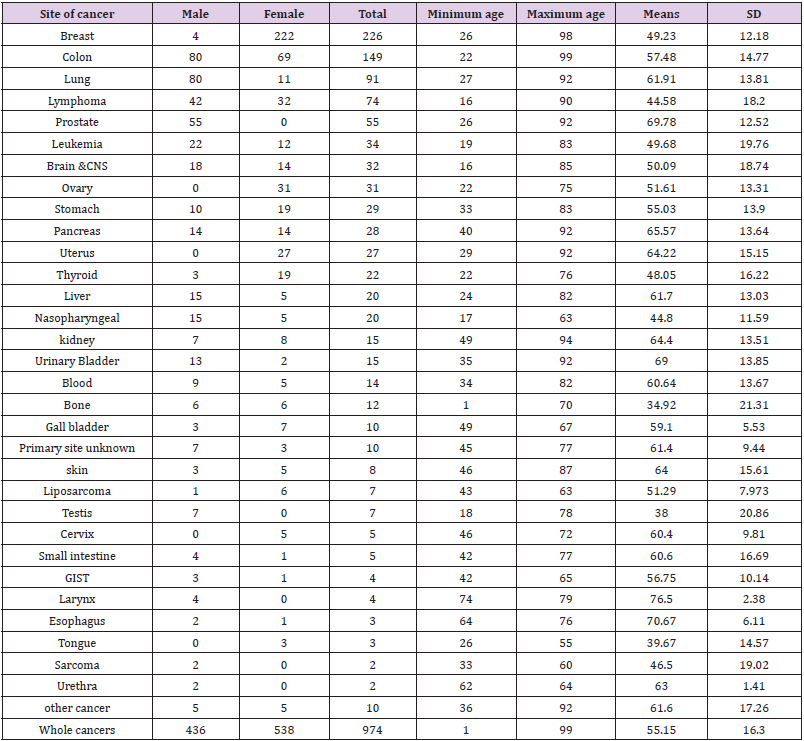 While in females, they were breast cancer (41.2%), colorectal (12.8%), lymphoma (5.9%), ovary (5.7%) uterus (5%), and stomach (3.5%). This data is similar to cancer cases registered in the western region of Libya 2008 [7]. They found that the most common cancers in males were lung (15.6%), colorectal (12.3%), prostate (9.9%), urinary bladder (7%) and stomach (5.5%) (Figure 4). While in females, they were breast cancer (23.7%), colorectal (9.4%), uterus (8.6%), soft tissues (5.3%) and stomach (5.2%). Furthermore, a study conducted in eastern Libya 2012 [9] which observed that in men cancer of colon accounted for 22.3%, followed by lung (20.3%), prostate (16.1%), pancreas (4.2%) and liver (4.2%). In women, breast cancer was (41.5%), remained the most common followed by colon cancer (16.4%), uterine (8%), ovary (5.5%) and pancreas (3.1%). The most common types of cancers found in the central region of Libya were breast, colorectal, lung, leukemia, and lymphoma.
Compared with the western and eastern regions of Libya, there was a similarity that lung, breast, and colon cancers were the most common in the three regions. However, pancreatic, and ovarian cancers were more common in the eastern region, but stomach and bladder cancers were more common in the western regions. While lymphomas and leukemias appeared more in the middle region. On the other hand, colorectal, lung and prostate cancers were the most common cancers diagnosed in men, while breast, colon and uterine cancers were the most common types of cancer among women in the three regions of Libya [7-9]. Breast cancer remains the most common cancer for females in both the western and eastern regions of Libya, rises in occurrence with age [6]. However, when comparing average age of some cancers like breast among Libyan patients with patients from the sub-Saharan Africa (e.g., Nigeria) and Northern Europe patients (e.g., Finland), it was found to occur at earlier ages in Libya and Nigeria than in Finland [8,13]. In this study, we clearly saw that breast cancer occurred more in females at the age of 41-50 years. The incidence of colon cancer in NCIMisurata was the second highest in the central region.
It is suspected that there is a strong relationship between this high rate of colon cancer and diet, as well as the absence of weight control and changing lifestyle habits of the Libyan people. The dramatic increase in the incidence of colorectal cancer may be explained by the better availability of endoscopic techniques for early detection and diagnosis [14,15]. The incidence of lung cancer in NCI - Misurata occupied the third rank in the incidence of cancers in the central region, and males showed 8 times more prevalence than females (Figures 6-8 and Table 3). It is suspected that there is a strong relationship between this high rate of lung cancer and the smoking habits of Libyan males. This increase in the incidence of lung cancer was noticed in Libya and all over the world. There were 1.82 and 1.59 million new lung cancer cases and deaths worldwide, respectively [1]. The increase in the incidence of lung cancer can be explained by the continuous improvement in radiological diagnostic tools and methods of cytological and histological examination for early detection of lung cancer. There is a significant lowering trend for non-Hodgkin lymphoma in female patients than males, however, it has remained fourth principal malignancy in women and fifth malignant tumour in men after prostatic cancer (Figure 9 and Table 3).

Figure 8: Age distribution of colorectal cancers in males and females. 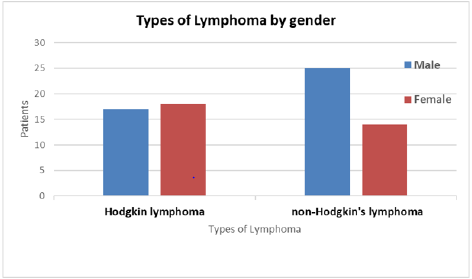 Figure 9: Gender distribution within both types of Lymphoma (HL and NHL).

Using a hospital-based cancer registry, this study determined the prevalence of cancer cases in Libya’s central area. Although the data was limited in various ways, such as the precise geographical data of the research locations, the cancer patient’s family history, and the patients’ lifestyle and habits, it was nevertheless useful. The presence of certain epidemiological data on patients, on the other hand, has given us with crucial information regarding the size and scope of malignant diseases in Libya. Despite the fact that the prevalence of cancer is higher in industrialized countries, cancer mortality is often higher in developing countries due to a lack of early detection and treatment. As a result, future research should include fatality rates as well as probable carcinogenic risks. Despite the fact that people have been displaced to Misurata from the eastern and southern areas of Libya, this study reflects the reality of cancer cases diagnosed and treated at the National Cancer Institute in Misurata in the center region of Libya (which is the third largest population city in Libya). This is the sole hospital in the area that provides medical services to oncology patients.

The authors grateful to the administration staff of the National Cancer Institute- Misurata for the support during this study.

Authors have declared that no competing interests exist.

Background: The epidemiological data of cancer cases provides vital scientific information to evaluate and estimate the burden of the disease in Libya.