Hypoglycemia is a frequently encountered metabolic abnormality in pediatric emergency departments, prompt management and correction is crucial and highly encouraged however, thorough evaluation and assessment of a possibly serious underlying cause is often overlooked by practitioners.

Importance of Glucose to the Human Body

Glucose is the essential and most preferred substrate of energy to the brain, cerebral and cerebrospinal fluid glucose levels are maintained through a facilitated diffusion process dependent on blood glucose concentration, multiple systems are integrated to maintain a steady level and the presence of hypoglycemia reflects a defect in one or several of these physiologic complex interactions.

Once exposed to a fasting period, glucose homeostasis in infants and children is maintained in the immediate phase by glycogenolysis, as the liver contains a storage of glycogen that would be sufficient to meet glucose requirements for approximately the first 6-12 hours, beyond that hepatic gluconeogenesis takes over, this step is limited due substantially smaller muscle bulk in infants/ children which puts them at a greater risk of hypoglycemia, thus by 24 hours of fasting blood glucose levels fall, simultaneous responses in the endocrine system occur, starting with insulin suppression followed by the rise of the counterregulatory hormones (glucagon, cortisol, growth hormone, and epinephrine) that contribute to glycogenolysis, gluconeogenesis and further activation of lipolysis and ketogenesis, at this point the brain gradually shifts to ketones as its main fuel. Glucose also serves as a source of structural substrates involved in the myelination and maturation of the brain during its rapid growth in infancy and early childhood, studies have shown that repetitive or sustained episodes of hypoglycemia can retard brain development and function by favoring brain metabolism at the expense of its growth. Long term sequalae of persistent hypoglycemia include microcephaly, lowered IQ, recurrent seizure activity and autonomic dysregulation.

Clinical features of hypoglycemia in pediatric population are variable according to age but generally fall into two categories. The first represents the activation of the autonomic nervous system in response to a rapid decline in blood glucose levels, this response is mediated by epinephrine release, including weakness, sweating, tremors, palpitations, tachycardia, and hunger. The second category represents the brain response to its insufficient glucose supply (cerebral glycopenia), including lethargy, confusion, irritability, loss of consciousness, and seizure. The symptoms of hypoglycemia can be so subtle that it might goes unnoticed or sometimes it can even be asymptomatic.

It has been difficult to define hypoglycemia by a single number, several professional groups have developed multiple guidelines but none agree on a specific value, recent consensus suggest that a glucose level < 2.8 mmol/L is the threshold indicating the need of obtaining a diagnostic panel (often referred to as the critical sample) prior to correction, to evaluate the possible defects behind inappropriate adaptation to fasting (i.e., excess insulin action, abnormal counterregulatory hormones response or enzymatic deficiency affecting the mechanisms of glycogen storage and release) (Table1). 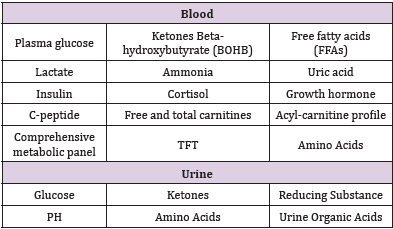 Table 1: The critical sample include both blood and urine specimens.

While there is a common misperception among pediatricians that hypoglycemia is a normal result of routine childhood illnesses, it can be an early presentation or a clue to a more serious underlying pathology, this practice leads to delays in diagnosis and increased risk of neurologic damage, thus we need to be more vigilant when evaluating a child with severe hypoglycemia that is disproportionate to concurrent illness. With that being said, we should advocate for better understanding and management of pediatric hypoglycemia through group education and possibly establishing a system based care-set to ease and fasten the process of accurate sample collection prior to treatment.

Hypoglycemia is a frequently encountered metabolic abnormality in pediatric emergency departments, prompt management and correction is crucial and highly encouraged however, thorough evaluation and assessment of a possibly serious underlying cause is often overlooked by practitioners.