Background: Acute and chronic inflammation can have serious effects on the body and cause severe pain reactions. In such situations, an application of anti-inflammatory substances would be useful. The active ingredients from classical medicinal plants are increasingly becoming the focus of research, as they were used in traditional medicine for many centuries and thus relatively safe. Plant metabolites have a wide range of pharmacological effects, such as high antioxidant, antiviral, anti-inflammatory and carcinogenic activity. In this study, the anti-inflammatory effect of Inflamyar™, a commercially available homeopathic spagyric product, was evaluated.

Methods: Primary human immune cells were incubated with the test substance with / without a subsequent inflammatory stimulus (LPS). Consecutively, the expression of CD69 and cytokines was evaluated.

Conclusion: This study documented an anti-inflammatory effect of the test substance on human immune cells in vitro.

Since virtually all organisms are constantly exposed to the influences of the living environment, the immune system has a great importance for the physical integrity of humans. It protects against threatening external influences such as infestation by microorganisms and parasites, but also against threats from the inside of the body, like e.g. necrotic and apoptotic cell material as well as functionally degenerated cells [1,2]. The human immune system is made up of several components. A distinction is made between a cellular and a humoral part. The cellular immune system comprises highly specialized immune cells that are either mobile (e.g. in the blood) or located in various tissues, e.g. Monocytes, Granulocytes, B cells, T cells, NK cells. The humoral immune system is the part of the immune system based on plasma proteins (antibodies, complement factors and cytokines) [2,3]. Upon induction of an immune response, humoral components of the immune system are initially released by the cells located in the affected tissue. By secreting these factors, other immune cells are lured to the focus of infection [2,3]. The inflammatory response in the body is important for the resolution of the cause of the inflammation but is also the cause of the symptoms of the disease [4]. The immune response is not entirely specific to its cause; even healthy tissue is always damaged [5].

This is especially important when an acute inflammation becomes a chronic inflammation that does not succeed in elimination of the trigger. For example, this may be due to the presence of debris in the tissue or frequent overload of muscles and joints. This persisting inflammation can massively damage the surrounding, primarily healthy tissue [6,7]. The damage of healthy tissue leads to severe pain reactions in both acute and chronic inflammatory reactions [5,8]. Moreover, chronic inflammation can lead to neoplasms (carcinomas or lymphomas) in many organs and in the lymphatic tissue and promote their growth and vascularization. Causes include the chronic proliferation stimulus, the growth-promoting effects of cytokines and the genomic damage caused by reactive oxygen species produced by immigrated immune cells [9-11]. In such situations, use of anti-inflammatory agents to assist and reduce the side effects of inflammation is useful [12,13]. Among the most widely used anti-inflammatory drugs include i.e., synthetic substances such as cyclooxygenase inhibitors, steroids, immunosuppressants and cytokine inhibitors [14,15]. These substances are usually proven to be extremely effective - but in part also show a wide range of unwanted side effects [16-18]. For this reason, the active ingredients from classical medicinal plants are increasingly becoming the focus of research.

In particular, secondary plant metabolites are in the interest of science since these have been in use in traditional medicine for many centuries and thus relatively safe and side effects associated with their use often relatively low [19-23]. Plant metabolites have a wide range of pharmacological effects, such as high antioxidant, antiviral, anti-inflammatory and carcinogenic activity [24-26]. Antiinflammatory ingredients such as alkaloids, phenols, flavonoids, glycosides, terpenes, quinones, catechins and carbohydrates of aqueous extracts from various traditional herbs have been described in several studies [25,27-29]. Besides of direct antiinflammatory actions, an interaction with immunological signal cascades, such as the reduction of proinflammatory mediators by inhibiting transcription factors of gene expression (Nuclear Factor κB, Inhibitor of κB), has already been demonstrated for some of these substances [30-32]. These modulatory effects of plant substances are particularly interesting for research. The individual effects of active ingredients from plant extracts are very diverse and have so far been described inadequately. For this reason further investigations are mandatory. In this study, the anti-inflammatory effect of Inflamyar™, a commercially available homeopathicspagyric product consisting of plant extracts from Arnica montana, Bryonia cretica, Guajacum, Toxicodendron quercifolium, Bellis perennis, Ledum palustre, Ruta graveolens and Viscum album was evaluated.

All experiments were conducted by NIS Labs, Klamath Falls, USA.

b) Adding of serial dilutions of test product, followed by addition of an inflammatory insult in the form of bacterial endotoxin LPS (lipopolysaccharide), to assess the ability of test product to reprogram the human immune cells to respond differently to inflammatory stimuli.

After an incubation time of 24 hours at 37°C and 5% CO2, blood cells were isolated and stained for 15 min with fluorochromeconjugated monoclonal antibodies at suppliers recommended concentration and then analysed via Attune acoustic-focusing flow cytometer (Thermo Fisher Scientific). Data analysis was performed using electronic gating based on cell size and granularity to distinguish lymphocytes and monocytes, allowing separate analysis of CD69 expression on lymphocyte subsets opposed to monocyte/ macrophage cell subsets. The subpopulation of lymphocytes was then analysed for CD69 expression on CD3-CD56+ NK cells. Costaining with CD3 and CD56 allowed further detailed analysis of four separate lymphocyte subpopulations, namely CD3-CD56+ NK cells, CD3+ CD56- T lymphocytes, and CD3+CD56+ NKT cells. The combination also allowed us to analyze the CD3-CD56- non-T non-NK lymphocytes for activation markers. For each of these populations we examined the expression level of the CD69 activation marker.

Immune cells harvested from human peripheral blood were used as a model for potential activities on immune activating and modulating. On the one hand, the direct activation of immune cells by the test substance, and on the other hand, the priming of immune cells to respond differently to a subsequent inflammatory insult was analyzed. Therefore, two sets of cell cultures were examined in parallel, on the one hand the highly inflammatory bacterial LPS from Escherichia coli and on the other hand the recombinant Interleukin-2 (IL-2) for activation was used as a positive control, and LPS was additionally used in one of the two cultures to induce inflammation after treating the immune cells with the test substance. As indicator for immune cell activation, the activation marker CD69 (cluster of differentiation 69) was chosen. In the case of lymphoid activation, CD69 is the earliest inducible surface glycoprotein and leads to lymphocyte proliferation and signal transmission at the cellular level [33,34]. Incubation of the cell culture with the test product (Figure 1) led to a slight increase in CD69 expression on monocytes (-6.3 to 28.8%) and lymphocytes (0.8 to 10.2%). Either no effect or else a slight increase was seen on Natural Killer (NK) cells (-4.1 to 24.7%), Natural Killer T (NKT) cells (-6 to 14.3%), non-T non-NK lymphocytes (-4.3 to 12.5%) and T cells (2.8 to 8.6%). 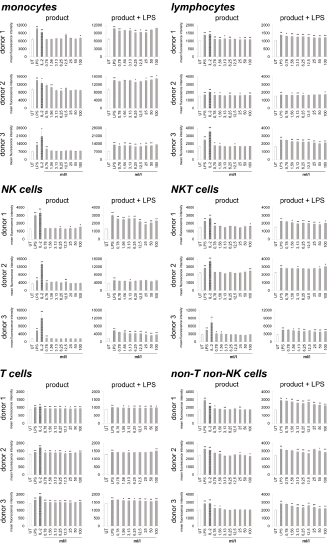 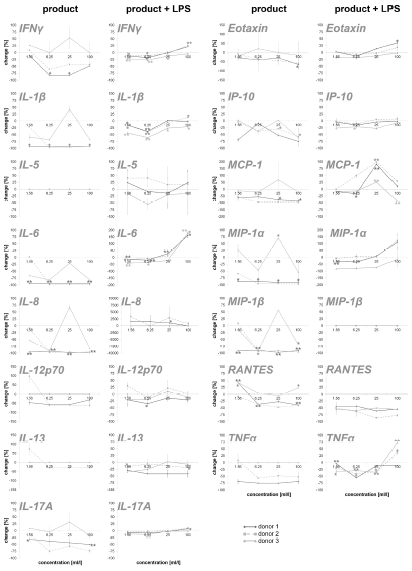 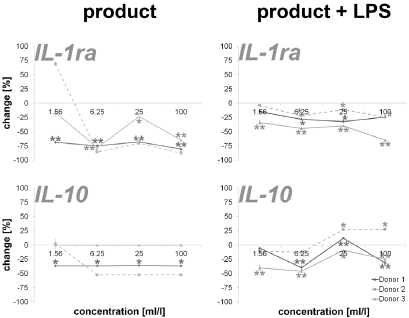 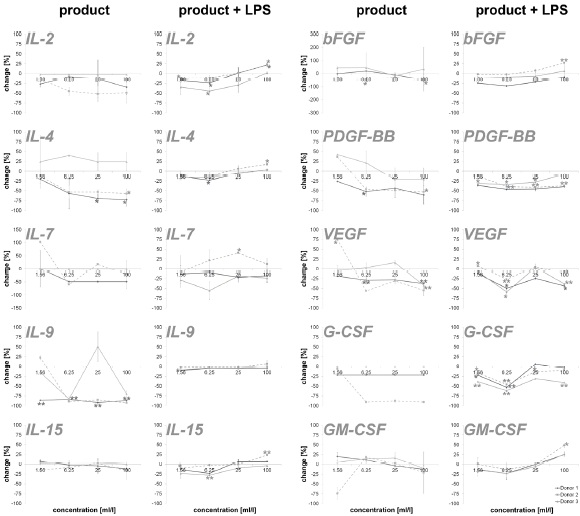 Unfortunately, not all donors in this study showed an equal response to the test substance. In view of the individual variations in the immune status of the donors (e. g. genetic and epigenetic aspects, potential pre-existing conditions), high deviations in the data from primary cells of different donors are not unexpected [35- 37]. From this point of view, the results of this study are relatively consistent. The observed dose-dependent regulation of the CD69 and cytokine expression of individual groups clearly underlines the validity of the data. In addition, the data generated in this study is consistent with previously published data from other workgroups. For example, a significantly reduced in vitro LPS-induced expression of TNFα, IL-1 and IL-6 from the human whole blood culture and RAW-264.7 cells showed Mahajan et al. after incubation with different dilutions of A. montana and Bryonia species (6CH, 30CH, 200CH) [38]. Lussignoli et al. showed a significant reduction in systemic IL-6 expression in a traumatic animal model after the use of a homeopathic preparation containing A. montana and other plant extracts and minerals [39]. In another study, T. quercifolium in dilutions of 6CH, 12CH, 30CH and 200CH appeared to interfere with an histamine, prostaglandins and other inflammatory mediators driven inflammatory processes [40]. Anti-inflammatory actions due to inhibition of both lipoxygenase and cyclooxygenase metabolic pathways were also seen in homeopathic remedy containing A. montana and T. quercifolium [41]. Porozov et al. described reduced IL-1β, TNFα and IL-8 secretion without an effect on human T cell and monocyte proliferation by a homeopathic remedy containing A. montana and B. perennis [42]. In addition, various studies showed anti-inflammatory properties of various extracts out of A. montana [43-48], Bryonia species [48-50], T. quercifolium [40,51,52], B. perennis [53], L. palustre [54,55], R. graveolens [56-60] and V. album [61-65], which are also contained in the test substance of this study. In summary, the data of the present study possesses a clear antiinflammatory effect and thus a potential for the test substance for the treatment of acute or chronic inflammatory reactions.

All data described in the manuscript are available from the corresponding author on reasonable request.

All experiments were conducted by NIS Labs, Klamath Falls, USA. MS, VS, MH and LH have performed data analysis and interpretation, MS prepared the manuscript. VS, MH, UK and LH critically reviewed the manuscript and contributed intellectual content. All authors read and approved the final version of the manuscript.

All experiments were conducted by NIS Labs, Klamath Falls, USA.

Background: Acute and chronic inflammation can have serious effects on the body and cause severe pain reactions. In such situations, an application of anti-inflammatory substances would be useful. The active ingredients from classical medicinal plants are increasingly becoming the focus of research, as they were used in traditional medicine for many centuries and thus relatively safe. Plant metabolites have a wide range of pharmacological effects, such as high antioxidant, antiviral, anti-inflammatory and carcinogenic activity. In this study, the anti-inflammatory effect of Inflamyar™, a commercially available homeopathic spagyric product, was evaluated.

Methods: Primary human immune cells were incubated with the test substance with / without a subsequent inflammatory stimulus (LPS). Consecutively, the expression of CD69 and cytokines was evaluated.

Conclusion: This study documented an anti-inflammatory effect of the test substance on human immune cells in vitro.