Material and Methods: The study was conducted on 190 samples from patients with high prolactin in Al Masarra Hospital either inpatients or out-patient clinics either male or non-lactating, not pregnant female. The measurement of the Prolactin level was measured by the automated analyzer COBAS e411, Roche Diagnostic. Macroprolactin was precipitated by using Polyethylene glycol (PEG).

Conclusion: Investigation for Macroprolactin should be done in every hyperprolactinemia patient who is receiving antipsychotics more especially the asymptomatic cases to avoid unnecessary radiological imaging and treatment.

Prolactin hormone is a globular protein, synthesized and secreted by lactotrophs in the anterior pituitary gland [1]. The main functions of prolactin are exerted during pregnancy, enabling breast development, milk production & lactation. Prolactin (PRL) has other biological functions as osmoregulation and immunoregulation [2]. PRL facilitates the maturation of T cells via IL-2 receptor expression, impairs B cell tolerance to self-antigens through the anti-apoptotic effect, develops antigen-presenting cells, and enhances immunoglobulin production [3]. Prolactin circulates in the blood in different forms; monomeric PRL with molecular weight 23 kDa (referred to as little PRL), and it is the immunologically and biologically active form, dimeric PRL with molecular weight 48 to 56 kDa (big PRL) which is biologically inactive, and polymeric form of PRL with a molecular weight > 100 kDa (big-big PRL) which is also called a macroprolactin (MaPRL) [4]. The predominant isoform of PRL in healthy people, and also in most individuals with hyperprolactinemia, is a monomeric molecule that amounts to more than 85% of circulating hormone. However, in some patients with hyperprolactinemia, the dominant form becomes MaPRL, which in normal conditions does not exceed 2% of total serum PRL [5].

The increase in serum Prolactin concentration (hyperprolactinemia) is caused physiologically by pregnancy, lactation, stress & pain and pathologically by a pituitary adenoma (secreting PRL), hypothyroidism, chest wall disease, hepatorenal disorders, and drug-induced (anti-dopaminergic drugs). The most common drugs that cause hyperprolactinemia are the antipsychotic medicines like risperidone, haloperidol, and olanzapine [6]. However, 29% of hyperprolactinemia has been classified as idiopathic, because the causes are unknown [7]. Anti-PRL autoantibody was found to be one of the major causes of idiopathic hyperprolactinemia [8]. In most cases, MaPRL is composed of immune complexes of PRL and anti-PRL autoantibodies, and 87% of MaPRL was PRL-IgG complex and 67% of MaPRL was autoantibody-bound PRL. Anti-PRL autoantibodybound PRL is a major form of PRL-IgG complex and PRL – IgG complex is a major form of macroprolactin [9]. It has been shown that MaPRL is biologically inactive because the large molecular size of this complex prevents its crossing through the capillary blood barrier and reaching target cells and immunoglobulin connecting with a specific epitope of PRL molecule may reduce the binding of the hormone to its receptors [10,11]. So, MaPRL has longer renal clearance resulting in its accumulation in the serum. In addition, the most available immunoassays used to measure PRL level do not distinguish MaPRL from monomeric PRL, which can lead to an incorrect diagnosis of hyperprolactinemia and unnecessary imaging study and treatment.

For detection of MaPRL, Gel filtration chromatography (GFC) is the gold standard method for quantification of the three variants of PRL, but this method is costly, time-consuming, and laborintensive, so it is not used in routine screening for MaPRL [14,20]. Laboratories generally use polyethylene glycol (PEG) precipitation to differentiate macroprolactinemia from true hyperprolactinemia. This method is simple and inexpensive and has been extensively validated against GFC. This study aims to evaluate the prevalence of MaPRL in hyperprolactinemic patients in Al Masarra hospital who are receiving antipsychotic medications by precipitating MaPRL with PEG.

The study was done on 190 samples from patients with high prolactin levels and was receiving antipsychotics either male or non-pregnant non-lactating female from outpatient clinics or in-patients’ wards of the Al Masarra hospital which is a tertiary psychiatric hospital in Sultanate of Oman from March 2020 to August 2020.

The measurement of the Prolactin level was measured by the automated analyzer COBAS e411, Roche Diagnostic. By using the electrochemiluminescence immunoassay “ECLIA” based on the sandwich principle, using biotinylated monoclonal specific antibody interacted with streptavidin-coated microparticles and second antibody which is monoclonal antibody labeled with a ruthenium complex. After the application of voltage, the chemiluminescent emissions were measured. The samples were separated and stored at -70 C0 till processing.

Preparation of 25% solution of PEG 6000 was prepared by dissolving 25 grams of PEG 6000 in 60 ml of distilled water at room temperature and mixing with vortex, then fulfilling the volumes till 100 ml of solution. The prepared solution is stable for three months maximum period at 4CO. In a separate glass tube, an equal amount of serum sample and 25% of PEG were added. After thorough vortex mixing for a minute and stabilization for 30 minutes, the solution was centrifuged at 9500 x g for 10 minutes. The supernatant portion of the sample was separated and prolactin level was measured in it. The prolactin level in the treated sample was multiplied by two to correct for the dilution with PEG. We followed the same protocol of Ana Maia Silva et al; 2014 in preparation of PEG solution and samples [21].

The free prolactin is the prolactin level which will be recovered after precipitation of MaPRL by PEG.

The macroprolactin level will be determined using the following formula:

All data were recorded and entered in a statistical package on a compatible computer and varied. Analysis was done using an SPSS- 20th version. The results were tabulated, grouped and statistically analysed using the following tests:

• Frequency with percentage (for qualitative data)

2. Student Test: A statistical test used to test for a significant of an independent variable in experiments where there are only two levels of this variable (to compare between two independent means).

5. Logistic Regression Analysis: used to examine the extent to which a set of variables independently predicts a dependent variable.

6. P value: Used to indicate the level of significance:

2. Qualitative Data: frequency of occurrence was calculated by number (N) and percentage %.

1. Comparing between groups was done using:

4. The results were presented in tables and figures.

The mean of total PRL & MaPRL was higher in patients who were receiving haloperidol more than the other medications. (Table 1 & Figure 1). In our study there was a positive correlation between total prolactin and macroprolactin levels (r = 0.59, p < 0.01) (Figure 2). 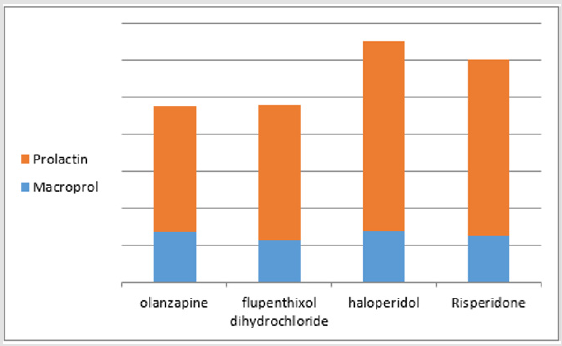 Figure 1:The mean of PRL & MaPRL in Olanzapine, Flupenthixol Decanoate, and Haloperidol & Risperidone. (The figure shows that the mean of the total prolactin level and the mean of macroprolactin levels were higher in patients receiving haloperidol that in other medicines). 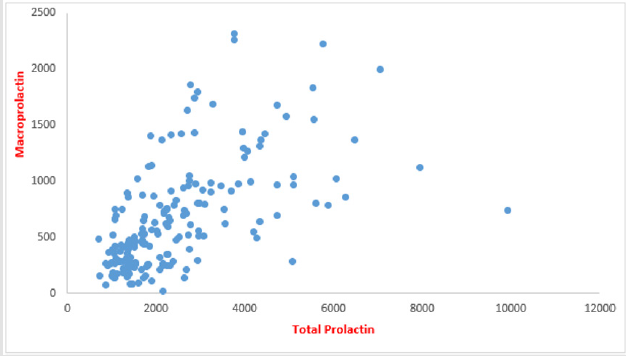 Macroprolactin was described for the first time by Wittaker et al in 1981 when they reported a case with hyperprolactinemia without the common symptoms of amenorrhea, galactorrhea, and infertility. It was found that the high molecular weight MaPRL accounted for the majority of PRL in this patient by using GFC. It is PRL-IgG immunocomplex in which endogenous IgG molecule is directed against epitopes on N- and C-terminal restudies of monomeric PRL [27]. In the present study, treatment of the sera of patients with high prolactin with 25 % PEG 6000 was done leading to precipitation of macroprolactin and free prolactin level was measured in the supernatant. This method is the easiest and cheapest method for detecting MaPRL but it can precipitate monomeric PRL also with MaPRL leads to a reduction of post-PEG PRL values in all serum samples with a mean reduction of 28.3% in this study. In our study, we used the most common cut-off <40 % recovery rate to consider the case positive for macroprolactinemia. It has been reported that the 40% cutoff is 100% sensitive to confirm the presence of MaPRL while using a 60% cutoff does not report significantly more patients with significant macroprolactinemia [28].

In our study, 10.5% were detected with macroprolactin predominance which is consistent with studies that have been documented in the United States which found that about 10% of hyperprolactinemic patients have MaPRL as a predominant form of PRL but most of the studies conducted in Europe have shown that the predominance of MaPRL is usually above 20% [27-29]. 95 % of cases of MaPRL were asymptomatic and 5 % were complaining of amenorrhea. Although MaPRL is biologically inactive the symptoms could be co-incidence or intermittent dissociation of macroprolactin from IgG molecule could happen and causing the symptoms as suggested by Hattori N et al in 1997 [30]. Suliman AM et al also explained that although Big-Big PRL may be the predominant molecular form in MaPRL, monomeric PRL may simultaneously be found in excess. Therefore, MaPRL could be associated with monomeric hyperprolactinemia which leads to the development of symptoms of hyperprolactinemia [31]. In our study prolactin levels and macroprolactin levels were significantly higher in females than males as the previous results of Johnsen, et al. [32- 33]. The antipsychotic-induced hyperprolactinemia is related to differential D2 receptor affinity, 5-hydroxytryptamine receptor affinity, and blood-brain disposition of antipsychotics [34].

Risperidone is one of the anti-psychotics that have poor bloodbrain barrier penetration and high concentrations of risperidone exist in the pituitary [35]. In our study risperidone appeared to increase prolactin in 56.3% of patients, haloperidol was the second medicine which increased PRL in 29.5% of patients, Flupenthixol Decanoate increased PRL in 9.5% of patients and Olanzapine was the fourth medicine which increased PRL in 4.7 % of patients. In our study, there was no significant difference in medications used between the symptomatic and asymptomatic groups. The mean prolactin and macroprolactin levels were higher in patients who were receiving haloperidol than the other medicines but was no statistically significant difference between them. Beda-Maluga et al. reported that most patients with a PRL concentration higher than 100 ng/ml (2127 uIU/mL) had true hyperprolactinemia, although significant macroprolactinemia might be present in some cases [36]. The American Association of Clinical Endocrinologists recommends using a 25–150 ng/mL (532 - 3191 uIU /mL) interval to search for MaPRL, and the Endocrine Society suggests testing every asymptomatic patient for hyperprolactinemia [37]. Our study shed light on the prevalence of macroprolactin in patients receiving antipsychotics by measuring the prolactin level by COBAS e411 analyzer, we suggest in the future study increasing the number of patients and studying the prevalence of macroprolactin using different platforms other than COBAS analyzers.

The authors would like to thank Dr. Sameh Yousry Bondok for his valuable help and support in this study.

Material and Methods: The study was conducted on 190 samples from patients with high prolactin in Al Masarra Hospital either inpatients or out-patient clinics either male or non-lactating, not pregnant female. The measurement of the Prolactin level was measured by the automated analyzer COBAS e411, Roche Diagnostic. Macroprolactin was precipitated by using Polyethylene glycol (PEG).

Conclusion: Investigation for Macroprolactin should be done in every hyperprolactinemia patient who is receiving antipsychotics more especially the asymptomatic cases to avoid unnecessary radiological imaging and treatment.