Correct diagnosis and early orthodontic treatment of malocclusion, especially of crossbite, allows proper targeting of the growth of the dental arches and the correct development of the occlusion. Within this context, the present study sought to report a clinical case of posterior crossbite. To resolve this case, a removable orthodontic appliance with an expander vice was used.

Malocclusion is a developmental disorder resulting from the interaction of genetic and environmental factors that affect the craniofacial complex, compromising functional and aesthetic aspects of individuals [1-4]. It is extremely important that the dental surgeon pays attention to the early diagnosis of malocclusions that affect the deciduous and mixed dentition, as well as a careful evaluation to determine the most effective treatment [5]. One of the most prevalent malocclusions in children in mixed dentition is posterior crossbite, with estimates ranging from 7 to 23% [6]. It is characterized by the abnormal position of one or more teeth in the maxilla, in relation to one or more teeth in the mandible, when the arches meet in a centric relationship. It is usually evident during the mixed dentition phase [7,8]. Posterior crossbite can be classified as functional unilateral when the teeth are in occlusion, there is no midline coincidence, and one or more unilateral posterior maxillary teeth are inclined towards the lingual. Another classification is the true unilateral, which occurs due to a deficiency in bone growth asymmetric in the width of the maxillary or mandibular arch, coinciding with the midline and bilateral posterior crossbite, which occurs due to bilateral maxillary atresia [9].

This malocclusion may exhibit dental, skeletal or functional characteristics, requiring a correct diagnosis for planning and effective treatment. When it occurs between canines it is called anterior crossbite and when it occurs between premolars and molars it is called posterior crossbite [10]. Posterior crossbite can affect the development of permanent dentition when not treated early, therefore, an earlier treatment plan is needed, involving expansion of the upper arch when this crossbite is skeletal [11]. Preventive orthodontic intervention allows for the correction or improvement of the present situation, alleviating the need for corrective orthodontic treatment later, preventing malocclusion from appearing in the permanent denture and favoring the harmonious growth of the bone bases. Maxillary expansion appliances can be used to correct unilateral or bilateral posterior crossbites, fixed or removable appliances with expansion screws are indicated for the treatment of this malocclusion. Removable braces have the advantage that they can be removed by the patient when they are in a social environment. However, the possible lack of patient cooperation in the use of the appliance and interrupted tooth movement are the main disadvantages [12]. It can be observed that there are few studies in the literature that report the treatment of these malocclusions with removable appliances. Within this context, the aim of this study is to address the treatment of posterior crossbite, with interceptive orthodontics using a removable appliance with an expander vise, minimizing the complexity of malocclusion and the need for possible future orthodontic and surgical treatments.

Patient J.B.T. a 9-year-old female sought dental care accompanied by her guardian. The main complaint of the patient and his guardian was the presence of “crooked teeth”. Through the extra-oral examination, in the frontal analysis it was possible to have a symmetrical face and straight profile (Figure 1), in the intraoral clinical examination, we observed mixed dentition, presence of upper dental arch atresia and bilateral posterior crossbite (Figure 2). It was observed that the patient had an Angle Class I molar and canine relationship, competent lip seal, good oral hygiene and normal swallowing. Orthodontic documentation was requested as a complementary exam (Figure 3). The proposed treatment plan was the creation of a removable orthodontic appliance with a maxillary expander (Figure 4 & Table 1), in order to expand the maxillary arch for transverse correction of the maxilla and thus uncross the bite. For the making of the appliance, molding of the arches with alginate was performed and the models were made with type III plaster. The models were sent to the specialized laboratory to manufacture the removable appliance (Figure 5). After installation, the person in charge was instructed to activate with the activating key, performing 1/4 of a turn once a week. Activation is being carried out so far, with weekly visits to the dentist to supervise the expansion. The guardian was informed that it would be normal for the child to feel discomfort in the first few days, with a possible opening of a diastema between the upper incisors, but that would soon be corrected naturally. A pastier diet was recommended in the first days and that sticky and/or hard foods were avoided in order to preserve the quality of the expander device.

b) Initial extraoral photo of the smile 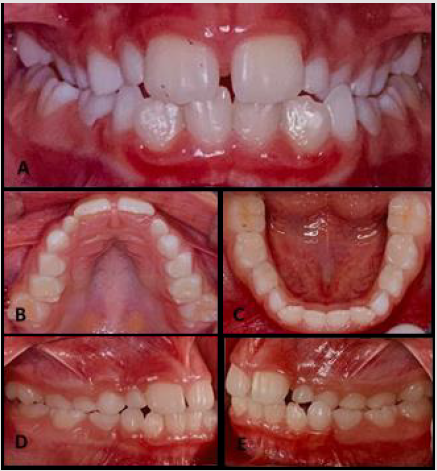 a) Intraoral photo of the smile

b) Intraoral photo of the maxillary arch

e) Intraoral photo of the left side with posterior crossbite. 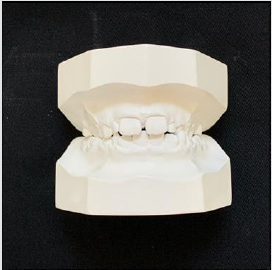 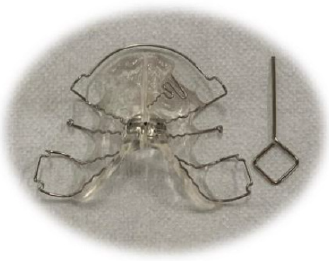 Figure 5: Removable orthodontic appliance with expander vice made for the patient. 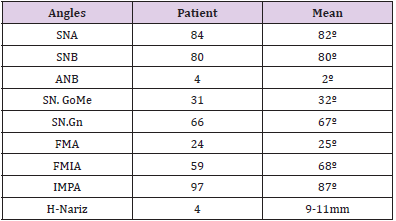 Problems caused by crossbite show a progression in terms of severity, so early intervention is essential in order to stimulate growth and balance occlusal development. Most treatments reported in the literature are performed during mixed dentition, an adequate period for occlusal orientation and malocclusion intercept. During this period, the dental surgeon has a greater possibility of treatment and a better opportunity to correct the crossbite. If delayed, treatment can become more complex. According to Ghersel (1992), the treatment of choice for posterior crossbites in deciduous and mixed dentition is slow maxillary expansion, which is usually performed with a removable appliance and an expander screw or a quad-helix appliance. For the treatment of posterior crossbite in the present study, it was decided to use a removable appliance with an expander vise. In the literature, the influence of this type of appliance in the upper interchained and intermolar distances is proven, in order to promote an increase in these dimensions, positive results are found in the slow expansion of the maxilla in deciduous and mixed dentition [11]. During the anamnesis and during the treatment, it was noticed that the patient is collaborative, thus the choice of the adopted therapy is justified, since the removable appliance with expander vise can be removed for cleaning, in addition to situations in which the environment social demand, unlike fixed braces, which can also cause tissue irritation. In addition, treatment with a removable expansion device is a simple, easy-to-manufacture, low-cost, and efficient treatment option. The role of the dental surgeon, especially the pediatric dentist, is fundamental in motivating the child and the family in relation to the treatment, as parents usually seek dental care seeking caries prevention, without knowing the importance of preventing orthodontic problems at this stage.

The clinical case presented in the present study highlights the importance of early diagnosis and treatment in posterior crossbites through the use of removable orthodontic appliances with expanders that effectively solve malocclusion, allowing for growth, development and favoring the establishment of a balanced occlusion.

Correct diagnosis and early orthodontic treatment of malocclusion, especially of crossbite, allows proper targeting of the growth of the dental arches and the correct development of the occlusion. Within this context, the present study sought to report a clinical case of posterior crossbite. To resolve this case, a removable orthodontic appliance with an expander vice was used.