Antibiotics resistance has become a major concern among Gram-negative bacterial infections because of the unavailability of alternative treatment options. The antibiotic resistance phenomenon is emerged due to antibiotics overuse and bacterial evolution [1]. Colistin is a cationic polypeptide-based antibiotic, also known as polymxin E, it’s considered the reserve antibiotics against the multidrug resistance (MDR) infections caused by Gramnegative bacterial pathogens such as Enterobacteriaceae [2,3]. The antimicrobial action of Colistin is directed towards the Gramnegative bacterial cell membrane by interacting and disrupting the lipopolysaccharide (LPS) molecules in the outer membrane which results in bacterial death [4]. In the last decade, there is an increased in the resistance of bacteria against several commonly used antibiotics and the limitation in discovery of a new ones had led the Colistin as a valuable drug of choice for many MDR strains [5-7]. MDR bacterial strains was defined MDR as acquired nonsusceptibility to at least one agent in three or more antimicrobial categories. Unfortunately, MDR, extensively drug-resistant (XDR), and pan-drug-resistant (PDR) strains of E. coli and other Enterobacteriaceae strains were detected worldwide, and they were harboring multiple resistance mechanisms [8-10].

Some bacterial strains have a natural Colistin resistance ability, such as S. marcescens, Proteus spp., B. cepacia, M. morganii, Providencia spp., and Vibrio cholera [11]. However, recently, several studies have reported Colistin-resistant isolates that have acquired Colistin resistance via chromosomal genes or plasmids worldwide [12,13]. Resistance to Colistin was associated with mutation in two components regulatory system that mediated by chromosomal genes [14,15]. The gene mcr-1 is gene of the phosphoethanolamine transferase enzyme family, which reported for the first time from China in 2016 as the first plasmid-mediated Colistin resistance gene among the Escherichia coli (E. coli) strains obtained from patients, animals, and food [16-19]. Ever since, mcr-1 positive strains have been detected in Enterobacteriaceae worldwide [20-24]. This first plasmid-mediated gene was followed by reports of variants mcr-1 genes (mcr-1.2, mcr-1.3…) and also the description of new other 7 mcr genes (mcr-2 - mcr-8) [25-29]. The emergence of colistin resistance genes have the ability to cause a major therapeutic challenge in the treatment of Enterobacteriaceae infections, which led to new recommendations for clinicians and laboratory diagnosis [30-32]. The Colistin-resistant Gram-negative bacteria impact on the clinical outcomes is clear. Thus, an appropriate and concrete actions against this strain is urgently required. This study focuses on the identification and the distribution of Colistin resistance genes among Gram-negative bacteria isolated from clinical samples at the National Ribat Teaching hospital, in Khartoum, Sudan.

To investigate the occurrence of Colistin resistant Gramnegative bacteria, a total of 165 different clinical samples obtained from the Department of Medical Microbiology at the National Ribat University Teaching Hospital in Khartoum, Sudan. All samples were transported to the laboratory in an insulated cool box with ice packs. The isolation of Gram-negative strains from all samples were performed using Cysteine Lactose Electrolyte Deficient (CLED) agar medium (HiMedia, India). The inoculated plates were incubated aerobically at 37ºC overnight. Bright yellow lactose fermenting and pale green non-lactose fermenting colonies were selected for further analysis. The isolate were identified based on biochemical standard phenotypic analysis according to Cowan and Steel, 1985. All the samples were collected and processed after approval of the ethical committee at the National Ribat University.

A total of 165 Gram-negative strains, consist of Klebsiella pneumoniae (73/44.2%), E. coli (53/32.1%), Pseudomonas aeruginosa (33/20%), Proteus vulgaris (6/3.6%), and Citrobacter freundii (2/1.2%), were isolated between December 2019 and February 2020 from 165 different clinical samples at the National Ribat Teaching hospital in Khartoum, Sudan. Stock of all isolates were stored in 20% Glycerol-broth at -80°C for further subculture for antimicrobial susceptibility profile and resistance genes associated with Colistin resistance were identified.

Antibiotic susceptibility testing was performed by disc diffusion assay according to guidelines from the Clinical and Laboratory Standards Institute (CLSI) (CLSI, 2012). Our first approach to screen Colistin resistance among bacterial isolates, a 10 μg disc of Colistin was used and the test was performed on Mueller Hinton agar (HiMedia, India) and included a panel of 14 antibiotics belonging to different classes (Table 3). Isolates displaying an inhibition zone ≤ 10 mm (n = 61) were selected for further testing of Colistin resistance (mcr-1, mcr-2, mcr-3, mcr-4, mcr-5) genes.

Out of 165 different clinical samples collected from patients suffering from different infections, 165 Gram-negative bacterial strains were obtained as following, E. coli (53/32.1%), K. pneumoniae (73/44.2%), P. aeruginosa (33/20%), Colistin-resistant (6/3.6%), and C. freundii (2/1.2%), (Table 2). In the present study, the prevalence of E. coli strains was relatively resistant to (25/47%) ciprofloxacin, (26/49%) ceftazidime, (29/55%) cotrimoxazole, (33/62%) amoxicillin, (30/57%) gentamicin CN30, (25/47%) cefepime, (36/68%) ampicillin, and (28/52%) amoxicillin/ clavulanate. K. pneumoniae isolates were highly resistant to amoxicillin (58/79%), gentamicin CN30 and ampicillin (52/71%). Antibiotic resistant patterns were very low among P. aeruginosa isolates, as the majority of the isolates were shown more sensitive to most of the antibiotics. Only one Colistin-resistant E. coli isolate was resistant to aminoglycoside and beta-lactam antibiotics. It was found that out of 165 Gram-negative isolates, 11 isolates (7%) were resistance to Colistin antibiotic with MIC ≥ 9-10 μg/Ml. The majority 67% (4/6) of K. pneumoniae Colistin-resistant strains were considered MDR. Although, the two P. vulgaris strains and one C. freundii strain were also considered as an MDR strains.

Three out of the 6 (50%) clinical Colistin-resistant K. pneumoniae isolates were resistant to carbapenems (meropenem ≤ 2 μg/ml). One of these 3 strains was resistant to all tested antibiotics. The remaining K. pneumoniae strains were susceptible to most tested antibiotics (Supplementary material Table. A1). The two Colistin-resistant P. vulgaris isolates were resistant to all antibiotics including the carbapenems (meropenem ≤ 2 μg/ml) and were only susceptible to amikacin and ciprofloxacin. Colistin resistant C. freundii isolate was only susceptible to amikacin, cotrimoxazole, and carbapenems. Antimicrobial susceptibility testing revealed that the isolated Colistin-resistant E. coli strain was resistant to aminoglycoside and beta lactam antibiotics. No isolate was classified as XDR or PDR (Table 2). High resistance was observed against both amoxicillin (62%) and ampicillin (63%). Moderate resistance was observed against ceftazidime (44%) and gentamicin N30 (52%). Furthermore, low resistance was shown against florfenicol (4%), nitrofurantoin (6%), piperacillin (7%), and meropenem (13%). The majority 55 % (6/11) of Colistin-resistant strains were isolated from wound infection samples, (Table 3). 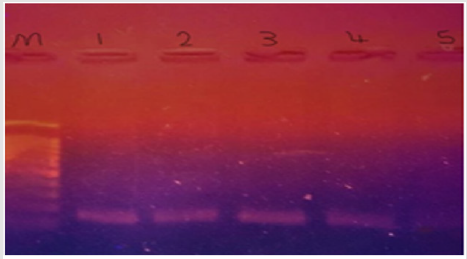 In this study, the phenotypic and genomic characterized Gram-negative isolates with Colistin-resistant genes in different clinical samples obtained from the National Ribat hospital. One hundred sixty-five Gram-negative bacterial strains were obtained as following, E. coli (53/32.1%), K. pneumoniae (73/44.2%), P. aeruginosa (33/20%), P. vulgaris (6/3.6%), and C. freundii (2/1.2%). Knowing the fact that Colistin antibiotics are considered the last-resort antibiotics in many areas with MDR Gram-negative strains has led the occurrence of Colistin-resistant bacteria to increases around the world. For this reason, the prevalence of Colsitin-resistant (mcr) gene among Gram-negative strains isolated from clinical samples in Khartoum, Sudan was evaluated; The prevalence of Colistin-resistant Enterobacteriaceae strains was low in many studies around the world [33]. In this study, although the mcr-1 detection rate was not particularly high among Gramnegative isolates (7%). K. pneumoniae was the major Colistinresistant strains 67% (4/6), this was consistent with previous study conducted by Sherry and Howden in 2018 that showed K. pneumoniae strains were more resistance to Colistin than E. coli strains. Moreover, K. pneumoniae Colistin-resistant strains were considered MDR and this is in contrast with the recent report by Abd El-Baky et al. 2020, who found that P. aeruginosa represented the majority of MDR strains.

In the present study, the prevalence of mcr-1 gene was higher among K. pneumoniae 60% (6/10), and this is in contrast with those reported by Nahed Adam and Hisham N Altayb, 2017, they found that the majority of mcr-1 gene was detected among E. coli strains. This difference can be explained by the fact that they majority of their isolates were E. coli compared to this study; it was K. pneumoniae. Surprisingly, in this study the prevalence of Colistin resistance among P. aeruginosa isolates was considered low which was similar to the reported rates from previous study [34]. Additionally, the MDR P. vulgaris and C. freundii isolates were both have maintained a very low Colistin resistance rate (Table 4). So far, a high mortality rates have been immensely associated with the colsitin-resistant Gram-negative infection [35-39]. Thus, an intense investigation is required to increase the therapeutic choices for such pathogens. This study showed that overall characteristics of Gram-negative isolates were susceptible to florfenicol (4%), nitrofurantoin (6%), piperacillin (7%), and meropenem (13%) (Table 3). Interestingly, 9 (82%) out of 11 Colistin-resistsnt Gram-negative isolates were susceptible to amikacin. Thus, aminoglycoside (amikacin) might be options for treating Colistin-resistant Gram-negative bacteria, and this finding is consistent with previous reports showing that Colistin-resistant strains were susceptible to amikacin [40].

It seems in Gram-negative pathogens isolated from different clinical samples have acquired Colistin-resistant gene, either through mutation of the genes or acquisition of mcr gene from other bacteria. However, the relatively large number of isolates and the low prevalence of mcr gene carrying strains obtained from the patients suggests that the evolution of Colistin resistance is currently of major concern in hospital, this was the first report of mcr-1&2 genes detected among Gram-negative strain in Sudan at the National Ribat hospital in Khartoum.

Authors declare that they have no conflicts of interest in this work.