Colorectal cancer is the second most common cancer, the third most common cause of cancer death [1]. Approximately 25% of the patients have metastatic disease at the time of diagnosis, and about half of these patients die within the first 5 years [2]. Inflammation plays an important role in the development of cancer, tumor progression, angiogenesis, and cancer metastasis [3]. Infection, chronic irritation and inflammation are the underlying causes of the development of many types of cancer. Previous studies have shown that inflammatory biomarkers such as Neutrophil/ Lymphocyte Ratio (NLR), Plateret/Lymphocyte Ratio (PLR), Monocyte/Lymphocyte Ratio (MLR), Mean Platelet Volume (MPV), and C-reactive Protein (CRP) may be used as prognostic factors in gastrointestinal cancers [4,5]. Platelet activation is known to play an essential role in tumor growth and metastasis. Studies have shown that PLR is a negative prognostic marker in advanced cancer [6]. MPV is associated platelet activation and production as well as the mean platelet volume in the blood [7,8]. Studies revealed that MPV is closely related with many types of cancer such as colon, thyroid and, renal cell carcinoma [9-11].

Tumor Node Metastasis (TNM) staging system remains a prominent method in predicting prognosis and determining treatment options. However, the survival of patients even in the same stage varies. New biomarkers are required to determine the prognosis. Platelet, MPV and lymphocyte levels, which are among the most analyzed parameters in peripheral blood, are both costeffective and routinely usable inflammatory markers. In this study, we aimed to investigate the prognostic significance of MPVLR in patients with metastatic colon cancer.

A total of one hundred sixteen patients, diagnosed as colon cancer with de novo metastatic disease or developed metastasis during follow-up, between January 2014 and December 2020, were retrospectively evaluated. Inclusion criteria for the study were patients over 18 years of age, histopathologically diagnosed with colon adenocarcinoma, and patients who developed metastases during diagnosis or during follow-up. Patients receiving antiinflammatory therapy, patients with hematological or autoimmune diseases, heart failure and hemodialysis patients were excluded from the study. Information obtained from patients’ files and computer records are as follows: Age, gender, tumor localization (right colon vs. left colon), grade, number of chemotherapy steps, metastasis status at the time of diagnosis, blood hematological and biochemical markers, history of metastasectomy, KRAS, NRAS, BRAF mutation status, presence of liver metastases. Peripheral blood samples were taken from De nova metastatic patients before treatment. Peripheral blood samples were taken before any treatment when metastasis was detected in the patients who developed metastases during the follow-up.

Overall survival was determined as the length of time from metastatic diagnosis to death, or to the last follow-up date for survivors. Progression-free survival was accepted as the length of time from metastatic diagnosis to disease progression, or to the last follow-up date for patients without progression. All patients received biological agents such as bevacizumab, cetuximab or panitumumab depending on the mutation status. Peripheral venous blood samples were collected into sterile blood collection tubes containing Ethylenediaminetetraacetic Acid (EDTA) (5-7 ml). Mean platelet volume to lymphocyte ratio was estimated by dividing MPV (fL) by the number of lymphocytes (109/L). All statistical analyzes were performed using Statistical Package for the Social Sciences (SPSS) 20 (IBM Corporation, New York, NY) software. The relationship between categorical variables was assessed by chi-square test. Categorical data were expressed as frequencies and percentages. The relationship between MPVLR and prognosis was evaluated using the cox analysis. Multivariant analysis was performed using the cox proportional hazards model. Hazard ratios (HR) were estimated from the cox regresyon analysis and were reported as relative risk with corresponding 95% Confidence Intervals (Cls). Receiver Operating Characteristic (ROC) curve analysis was performed to estimate the best cut-off value of MPVLR for overall survival. The best cut-off point was expressed by using the Youden index (sensivity + specificity -1). A value of P<0.05 was considered statistically significant. 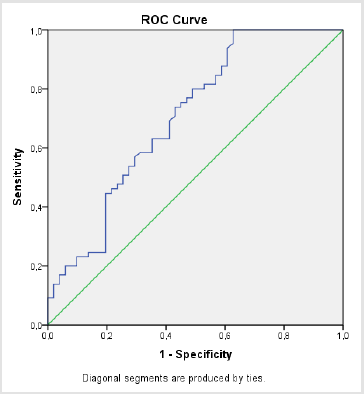 Figure 1:ROC curve analysis in patients with low and high MPVLR in terms of overall survival. 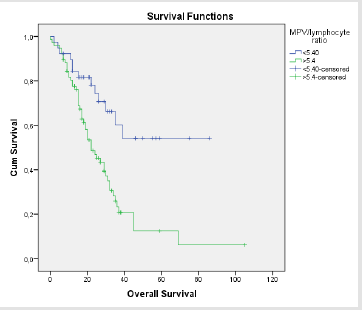 Figure 2:Kaplan-Meier of survival based on the MPVLR in metastatic colon cancer patients. 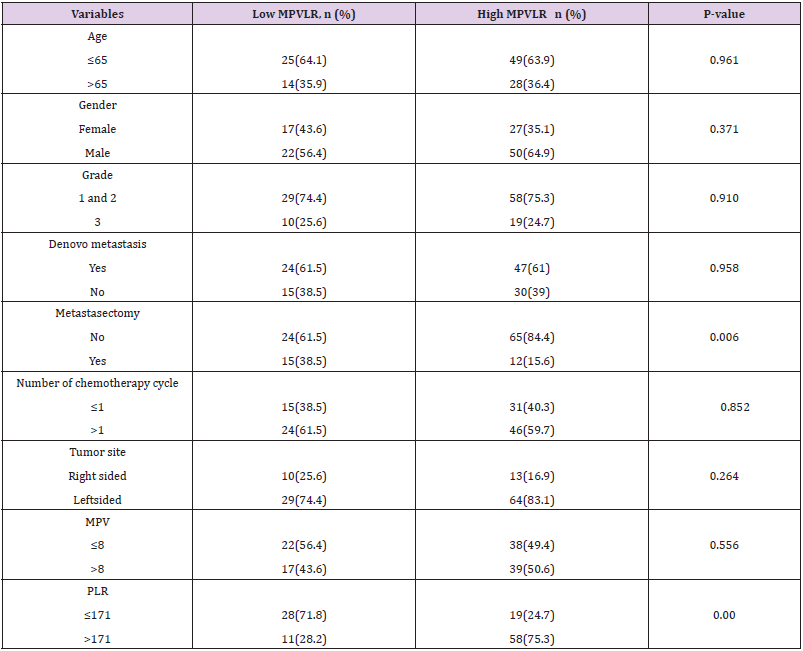 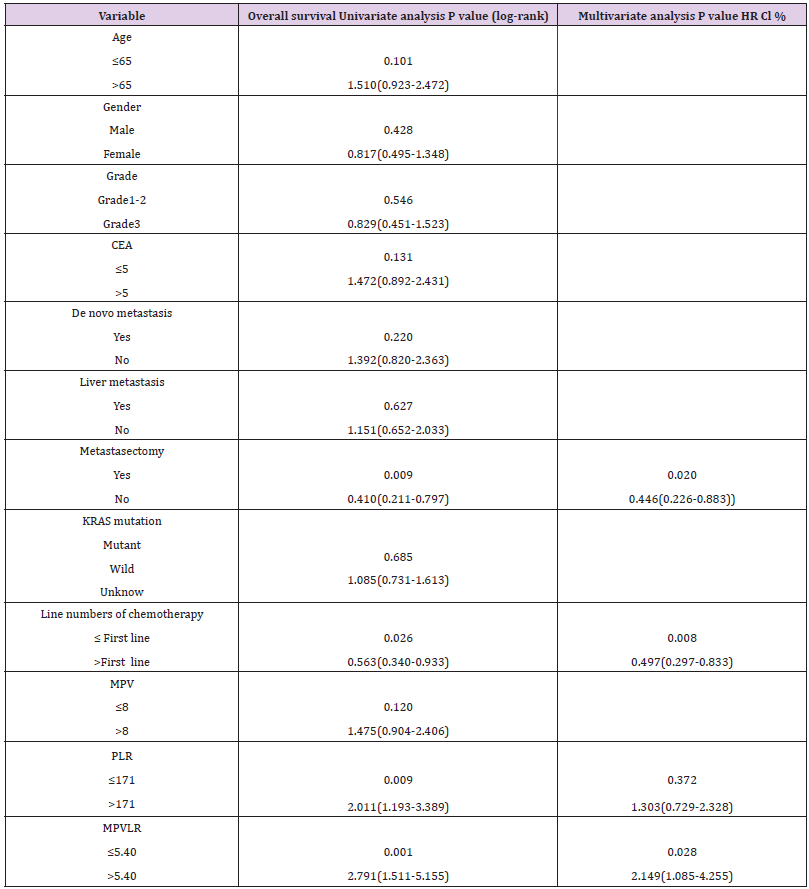 Table 3: Univariate and multivariate analyzes of clinicopathologic variables in terms of overall survival.

In our study, survival was found to be shorter in patients with high MPVLR, and high MPVLR was determined as poor prognostic factor in metastatic colon cancer. This study was the first to investigate the prognostic effect of MPVLR on metastatic colon cancer. The relationship between inflammation and cancer was defined by Rudolf Virchow in the 19th century [12]. Lymphocytes constitute the main component of the immune system. Tumor-Infiltrating Lymphocytes (TILs), constitute one of the most important effector mechanisms of anti-tumor immunity [13]. Tumor cells are surrounded by immune cells, especially lymphocytes. Lymphocytes play an important role in anti-tumor immunity by inducing apoptosis and preventing the migration and proliferation of tumor cells [14-16]. Lymphopenia was determined to be associated with poor prognosis in many types of cancer [16-19]. Platelets play an important role in hemostasis and thrombosis. In addition, platelets contribute to the growth, dissemination, and angiogenesis process of tumor cells. Plateletderived growth factor, mainly secreted from platelets, and tissue growth factor also leads to tumor growth [20,21]. Proinflammatory cytokines released by cancer cells increase platelet count through megakaryocyte proliferation [22]. Considering the relationship between platelet and cancer, platelet-based markers can be used to determine the prognosis of colon cancer. Mean platelet volume is used for measurement of platelet diameter indicating platelet activation. Large platelets are more reactive than small ones and are more likely to cluster to induce thrombosis. The function of platelets often depends on their size. Mean platelet volume better indicates platelet activation than platelet count [23]. Furthermore, MPV has been shown to have an important prognostic role in many malignancies such as gastrointestinal tumors, colorectal cancer, and lung cancer [24,25]. High PLR has been known from previous studies to be a poor prognostic factor in cancer [6]. It was supposed that use of MPV, a better indicator of platelet activation, instead of platelet count in PLR would be more indicative in determining prognosis.

This study is the first to investigate the effect of MPVLR on survival in metastatic colon cancer. In our study, the cut-off point of MPVLR for overall survival was estimated by ROC curve analysis. We determined cut off point for MPVLR as 5.4. High MPVLR was found to be a poor prognostic factor in patients with metastatic colon cancer. Survival was shorter in patients with high MPVLR. The limitations of our study were its retrospective design, and the fact that although undergoing bevacizumab, cetuximab, or panitumumab regimen according to KRAS and NRAS status, patients did not receive the same treatments due to not having the same mutation. As a result, MPVLR analysis before treatment, can be used in patients with metastatic colon cancer as a cheap and easily available prognostic marker.

Methods: A total of 116 patients with metastatic colon cancer were analyzed retrospectively between January 2014 and December 2020. The relationship between clinicopathological variables and MPVLR has been assessed with chi-square test. Log rank test and cox regression analysis were used for univariate and multivariate analysis. The best cut-off value of MPVLR for overall survival was determined by ROC curve analysis.