Increasing attention has been drawn lately to the biomedical application of BMGs. Successful rods of 3mm diameter and 35mm length of Cu40Zr45Al5Ag10 were obtained using pressure die casting method. The elaborated alloy was investigated by X-Ray diffraction (XRD), differential scanning calorimetry (DSC) and hardness tests. The results obtained in this study indicate that this alloy is attractive for obtaining in final shape by casting of non-implantable medical devices.

In today’s modern world biomaterials play a crucial role in a variety of commonly used medical devices. Ti and its wellknown Ti–6Al–4V alloy, originally developed as an aeronautical material, are still the most widely used structural biomaterials for producing long-term implantable devices due to their excellent biocompatibility, light weight, excellent corrosion resistance, etc. and they are mainly used for implant devices replacing failed hard tissues, for example, artificial hip joints, artificial knee joints, bone plates, and dental implants. Extensive investigations have shown that the release of V ion from the Ti–6Al–4V alloy to the human body might cause long-term health problems, such as peripheral neuropathy, and osteomalacia diseases. Thus, Ti–6Al–4V alloy somewhat lost its importance as the most used orthopaedic alloy. For this reason, there is an increasing demand for developing novel metallic biomaterials that are much safer and of much higher quality, in terms of both biomedical and mechanical properties. Bulk metallic glasses (BMGs) are a new type of metallic materials that have been developed recently [1-13]. The lack of long-range crystalline atomic structure of BMGs and the absence of associated microstructure defects gives them a number of unique properties comparing to their crystalline counterparts, making them very attractive for biomedical applications. Medical devices made from metallic alloys are in widespread use, and a process of continuous metallurgical improvement has led to enhanced biomechanical and biocompatible performance of these materials [8-10]. The traditional alloy is a polycrystalline material, and a significant body of literature exists describing, for example, innovations in the formulation and processing of titanium- and cobaltbased alloys for orthopaedic applications. Problems still being addressed include adverse corrosion, wear, and fatigue behaviour, manufacturing difficulties, a lack of elasticity, and high modulus (which can cause stress shielding). During the last two decades, increasing attention has been drawn to the biomedical application of BMGs [7-10]. Their high strength and elasticity, exceeding those of currently used biomaterials, together with good wear and corrosion resistance are desirable properties as biomaterials. In addition, their thermoplasticity permits precision net-shaping of complex geometries, which is of great benefit for the processing of biomaterials. Bulk metallic glasses are highly processable materials.

The advantages of directly casting a metallic glass component are: the absence of solidification shrinkage (typically about 5volume%) which accompanies the solidification of crystalline metals; the relatively low process temperatures associated with the deep eutectic nature of bulk glass forming alloys; the absence of microstructure in the casting, including the absence of cavities and other defects found in ordinary metals; the “single step” nature of producing a final part (i.e. no heat treatment, cold working, or subsequent aging process is required, and the metallic glass parts possess their final properties in the as-cast condition). Zrbased metallic glasses are widely studied [1-3,6,11,12] for their superior glass forming ability (GFA) with critical cooling rate close to 10K/s. Recently-developed Zr-based bulk metallic glasses are of much interest for potential use in biomedical applications because they have excellent mechanical properties, for instance a high elasticity of up to 2%. Only nitinol stents can reach this value among commercial stent materials: for example SS 316L, Co alloys, Ti alloys, etc. Recent researches are focused on developing new processing methods, dealing with the equipment limitations, finding the right combinations between chemical components and obtaining new unexpected properties (chemical, physical or magnetic). The present study was conducted in order to develop a new processing technology for bulk metallic glasses from the Cu-Zr- Al-Ag family, one that would exclude the limitations of the classical methods like the necessity of a vacuum chamber or protective gas atmosphere. This would constitute an important advantage for crossing from laboratory manufacturing to industrial processing.

Pure elements such as Zr, Cu Al and Ag were used in the first stage of the processing process. After mixing them, an Arc Melter AM 200 furnace was used to melt them and obtain batches of Cu40Zr45Al5Ag10 master alloys. Re-melting and casting in a copper mold was the next step, obtaining thus rods with 3mm diameters and 35mm lengths. The casting process was carried out in room atmosphere, without any special conditions, making it more accessible. Afterwards the samples structure was investigated by X-ray diffraction XRD using an X’Pert³ Powder diffraction system, with the radiation of a Cu anode with a wavelength λ = 1.54 Å. The thermal stability was assessed using the Differential scanning calorimetry (DSC) method on a Netzsch STA 441 Jupiter apparatus with a purified nitrogen flow and a heating rate of 10K/min. A Wolpert Micro-Vickers Hardness Tester was used for Vickers hardness HV measurements. Precision of the measurements was ensured performing at least 10 measurements.

Different methods are available for obtaining BMGs, involving usually rapidly cooling processes such as: die casting, centrifugal casting, water cooling of the melt, suction casting, pressure casting, etc. Pressure die casting requires the following steps: inductive melting of the master alloy in a quartz crucible, applying of the overpressure and ejection of the melt into a copper mold and extraction of the sample (Figures 1a-1c). The advantage of the process is that no special conditions are necessary during casting; the process was conducted in room atmosphere. Macroscopic aspect of the obtained rods can be observed in Figure 2. Metallic luster characteristic to metallic alloys with amorphous structure and the lack of surface defects such as pores or cracks are noticeable. X-ray diffraction method gives a good response when certifying the amorphous structure of the alloy. The aspect of the X-ray diffraction pattern (Figure 3) obtained for the Cu40Zr45Al5Ag10 alloy shows the absence of crystalline peaks, only a broad peak characteristic to an amorphous structure. The DSC curve of the elaborated alloys is showed in Figure 4. The alloy exhibits an exothermic peak which marks the crystallization of the amorphous phase and an endothermic peak for the melting of the alloy. The glass transition temperature (Tg), the crystallization temperature (Tx) and the melting temperature (Tm) alloy were determined and listed in table 1. The extension of the super-cooled liquid region ΔTx, defined as the difference between the crystallization temperature Tx and glass transition temperature Tg is quite large, about 79 degrees which means that this alloy has a good glass forming ability. 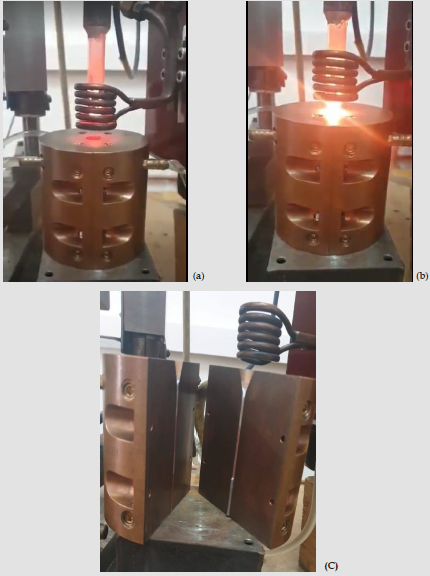 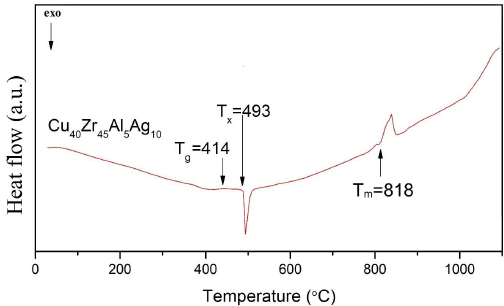 Table 1: Thermal and mechanical properties of the Cu40Zr45Al5Ag10 BMG rod.

When choosing the chemical composition it was taken into account the Inoue empirical rules [14] (the alloy must be multicomponent, the difference between the atomic radiuses of the components must be higher than 12% and negative mixing enthalpy of the components). The conducted experiments show that the selected chemical composition ensures a good GFA, allowing thus to obtain bulk metallic glasses with thickness of the order of millimeters. The results show that the melting temperature of this BMGs is lower than other metallic alloys frequently used in biomedical applications. This is due to the fact that the chemical components, especially Cu and Zr, form eutectics with low melting temperature. This constitutes a great advantage for the manufacturing of these alloys by casting.

Another major advantage of this BMGs compared with other materials is their high hardness. Hardness of 560 HV were measured on as cast alloys, double the value of 316L stainless steel which is the most common low carbon stainless steel for medical applications. The high value of hardness is ensured by the obtained amorphous structure and constitutes an advantage when replacing the classic materials for non-implantable medical devices with this one.

Cu40Zr45Al5Ag10 bulk metallic glasses were obtained in the shape of 3mm diameter and 35mm length rods using copper mold pressure casting technique. Compared with the conventional processing techniques of the Cu-Zr amorphous alloys, which require a vacuum chamber and special conditions, the casting was successfully conducted in air. The obtained alloy has good thermal stability, low melting temperature and high hardness, making it attractive for obtaining in final shape by casting of non-implantable medical devices.

Increasing attention has been drawn lately to the biomedical application of BMGs. Successful rods of 3mm diameter and 35mm length of Cu40Zr45Al5Ag10 were obtained using pressure die casting method. The elaborated alloy was investigated by X-Ray diffraction (XRD), differential scanning calorimetry (DSC) and hardness tests. The results obtained in this study indicate that this alloy is attractive for obtaining in final shape by casting of non-implantable medical devices.