A series of studies by Li and his colleagues suggested that deaf and hard-of-hearing adolescents’ recognition of category names can be influenced by the availability of processing time and by that of proper contextual information in cognitive tasks. Teachers should allow them to have a long processing time and/or provide as rich contextual information as possible when helping them to learn new words or requiring them to understand abstract words.

Most deaf and hard-of-hearing (DHH) students mainly use sign language and do not begin to acquire written language until when they go to school. According to Kroll and Stewart [1], DHH students should learn words in written language with the help of sign-language words. However, they do not seem to have sign-language expressions for many words in written language. Although having sign-language words for many exemplars (e.g., lion and mouse) of the category animals, for example, there was no ready expression in sign language for the category name “animal” for the students in Guangzhou Deaf School, China [2]. After years of school education, DHH middle-school students are able to recognize written words such as category names that are quite abstract in meaning. Interestingly, however, they seem to have developed a particular mechanism in category-name recognition [3-5]. In Li [3], a cohort of Korean DHH students were required to decide whether or not the two sequentially presented words (a category name and an exemplar word of the category) were semantically related. The category name preceded or was preceded by the exemplar word, and the exemplar word was of a high or a middle level of typicality in a trial. Each word was presented for 250 ms (milliseconds) followed by a blank screen for 50 ms. Given the possibility of DHH adolescents’ similar awareness of taxonomic relations between exemplars to that of hearing adolescents [6], the researchers expected a better performance in the high- than in the mid-typicality condition for the DHH participants.

The DHH adolescents did have been similar to the hearing adolescents in having significantly lower error rates for the highthan for the mid-typicality exemplar words when category names were presented first. When exemplar words preceded category names, however, they had significantly higher error rates in the high- than in the mid-typicality condition, which was different from their hearing counterparts. The researchers explained this antitypicality effect with a theoretical proposition, which we would like to separate into a general hypothesis and a procedural hypothesis. By the general hypothesis we mean that DHH adolescents are able to recognize category names at a slow speed and tend to have a shallow processing of category names in a limited duration; by the procedural hypothesis we mean that there is a stage in which representations for mid-typicality exemplars are inevitably activated during DHH adolescents’ early stage of category-name recognition. Importantly, the general and the procedural hypotheses appeared to have been directly confirmed by Li, et al. [4] and Li, et al. [5], respectively, in which all the word stimuli were Chinese twocharacter words (2C words).

In a primed semantic categorization task, in which the participants were required to decide whether or not the target referred to a living thing, Li, et al. [4] manipulated SOA (stimulus onset asynchrony) and type of stimuli. There were three types of stimuli: a category-name primer followed by an exemplar-word target of the category, an exemplar-word primer followed by an exemplar-word target of the same category or an exemplar-picture primer followed by an exemplar-picture target of the same category. The DHH adolescents’ reaction times (RTs) became gradually shorter as SOA increased from 87 ms to 237 ms by a step of 50 ms, when both the primer and the target were exemplar words or when they both were exemplar pictures. When the primer was a category name, however, their RTs did not become significantly shorter when SOA was increased from 137 ms to 187 ms or to 237 ms. Meanwhile, the DHH participants’ RTs were significantly shorter at the SOA of 137 ms than at that of 87 ms, suggesting a certain depth of automatic processing of the category names. In other words, the DHH adolescents only seemed to have a shallow processing of the category name, as predicted by the general hypothesis.

According to the procedural hypothesis, DHH adolescents should have representation activations triggered for some of the mid-typicality exemplars in the duration of 137 ms. This argument seemed to have been directly confirmed by Li, et al. [5], in which a category name was presented at the screen center for 87 ms followed by a 50-ms blank screen. Then, two exemplar stimuli were presented for 87 ms at the horizontally left and right sides or at the vertically upper and lower sides of the place where the category name disappeared. The two exemplar stimuli in a trial were both of a high level of typicality or were both of a middle level of typicality; they were both words, or they were both pictures. After a blank screen of 50 ms, the participants were required to make a decision as to whether or not the category name referred to living things. The DHH adolescents’ RTs did indicate an anti-typicality effect regardless of whether the two exemplar pictures both were from the target category (in Experiment 1) or one of them was from the target category and the other was from a non-target category (in Experiment 2).

The fact that an anti-typicality effect was consistently revealed in Korean [3] and Chinese [5] DHH adolescents’ category-name recognition can be explained as follows. With no ready expressions for taxonomic categories of super-ordinate level available in sign language, DHH students may learn category names in written language by associating them with exemplars of middle typicality but not with those of high-level typicality. It is due to this kind of association that DHH adolescents’ perception of category names results in activations of representations for mid-typicality exemplars. Indeed, this argument seems to receive confirmation from observations of children’s category-name learning [7] and from conclusions on their conceptual development for taxonomic categories [8]. Different from the researchers’ expectation, however, the DHH participants in Li, et al. [5] were similar to their hearing counterparts in showing the effect of typicality in RT scores in the exemplar-word condition. In other words, they seemed to have processed the category-name target more deeply in the exemplarword than in the exemplar-picture condition. To understand this result, we may have a close look at the 2C-word recognition by Tsang and Chen [9]. 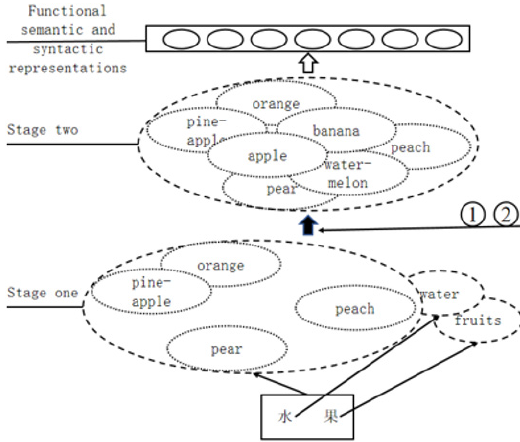 Similar to the case of Li, et al. [5], the participants had to keep the two sequentially presented words in working memory before they made a response in a trial in Li [3]. Different from Li, et al. [5], the participants did not have the availability of contextual information. However, they had the availability of a long processing time when category names preceded exemplar words. As the result of more than 600 ms of processing, the well activated whole-word lemmas was available for the category names. Due to the limited time of processing of the category names in the condition when exemplar words were presented first, however, only the firststage lemma activations were available by the time they made a response. In conclusion, DHH adolescents tend to have a shallow automatic processing of category names that are presented in isolation. In cognitive tasks in which they are required to make responses to the targets of abstract words such as category names, their depth of semantic processing of the targets can be ensured by the availability of a long processing time or of rich contextual information. Therefore, it is advised to avoid presenting new terms in isolation in teaching activities for DHH students. When helping them to learn new words or requiring them to understand abstract words, teachers should allow them to have a long processing time and/or provide as rich contextual information as possible.

This work was supported by the Second Round of the “13th Five- Year Plan” of Teaching Reform Research Projects of Zhejiang Higher Education (jg20191041).

A series of studies by Li and his colleagues suggested that deaf and hard-of-hearing adolescents’ recognition of category names can be influenced by the availability of processing time and by that of proper contextual information in cognitive tasks. Teachers should allow them to have a long processing time and/or provide as rich contextual information as possible when helping them to learn new words or requiring them to understand abstract words.