Methods:C57Bl/6 mice (male or female) were randomly divided into normal control group and DSS model group. The mice in model group were given DSS drinking water (30g/L) for 6 consecutive days, while the mice in normal group were given ordinary clean drinking water. The morphological characteristics of stool were recorded, and HE Staining was used to identify colonic inflammation. In vivo glucose tolerance experiments were performed to detect the glucose tolerance of the two groups of mice. Immunofluorescence Staining and morphological analysis were used to detect changes in the structure and composition of islets.

Conclusion: Our study demonstrates that DSS-induced colon inflammation can significantly reduce the number of pancreatic islets β cells and increase blood glucose levels, which may be related to the increased expression of CD34 in pancreatic islets. The present study provides new evidence for the study of the effect of intestinal inflammation on glucose metabolism.

Diabetes is a chronic metabolic disease characterized by hyperglycemia, which damages the heart, brain, and kidney to affect the health of patients. Diabetes patient in China has research to 114.4 million [1]. Both type 1 diabetes and type 2 diabetes are closely related to the number and function of islet β cells. Therefore, it is important to explore the regulation of the number and function of pancreatic β cells. Intestinal inflammation is involved in the occurrence and development of diabetes. The increased expression of inflammatory cytokines including Tumor Necrosis Factor-α (TNF-α), interleukin-1β (IL-1β), IL-6 and IL-1 is closely related to the occurrence and progression of type 2 diabetes. Furthermore IL-1β and TNF-α are key pro-inflammatory factors leading to pancreatic β cell damage and insulin resistance [2]. Treatment of high-fat diet C57BL/6 mice within intestinal anti-inflammatory, 5-ASA, reversed intestinal inflammation and effectively improved blood glucose levels [3]. Current reports on the mechanism of intestinal inflammation leading to diabetes mainly include that chronic intestinal inflammation may affect the number of intestinal secretory cells, the neuroregulatory signaling pathway of the brain - intestinal axis through changing the permeability of intestinal barrier and participate in the occurrence and development of insulin resistance and type 2 diabetes [4].

As a transmembrane glycoprotein, CD34 was first identified in hematopoietic stem cells and progenitor cells [5]. Later research has demonstrated that CD34 was expressed in muscle satellite cells, corneal keratinocytes, mesenchymal cells and other nonhematopoietic cell types [6]. Studies have shown that CD34 is closely related to inflammatory response. As a peripheral lymph node transmitter, CD34 participates in the homing of lymphocytes and the recirculation of lymphocytes in the early stage, to supplement T and B lymphocytes in peripheral lymph nodes [7]. CD34 is widely expressed in vascular endothelial cells in colon tissue of patients with IBD, which is related to the increase of micro vessel density [8]. In the study of 23 patients with ulcerative colitis, 16 patients with Crohn’s disease and 18 normal controls, the expression of CD34 in the two disease groups was higher than that in the control group [9]. Stzepourginski et al have confirmed that CD34+ mesenchymal cells develop in the intestinal tract after birth, participate in the repair of intestinal inflammation and injury, and contribute to the inflammation and repair of the intestinal tract after injury [10].

CD34 stem cell infusion can significantly promote the increase of survival rate of mice with moderate and severe colitis induced by DSS [11]. Furthermore type 1 diabetes patients can alleviate the disease after receiving CD34+ hematopoietic stem cell treatment [12]. And some studies have confirmed that people with low CD34 levels have a higher risk of diabetes, and the occurrence of diabetes is related to the decrease in the number of CD34+ cells and functional defects [13]. It has also been documented that diabetes impair the Bone Marrow (BM) microenvironment, thereby reducing the number of circulating CD34 (+) cells [14]. The above reports show that CD34 is closely related to intestinal inflammation and diabetes. However, it is not clear what role CD34 molecules play in the relationship between colitis inflammation and insulin secretion. The present study aims to explore the relationship between intestinal inflammation and islet function and the change of CD34 ,34, which will provide a new theoretical basis for the study of the effect of intestinal inflammation on diabetes.

C57BL/6 mice (18-20g) were purchased from Nanjing Qinglongshan Animal Breeding Farm. All animals are raised in a standard animal laboratory, with free eating and drinking water, the animal room is well ventilated. All experiments in this study have been approved by the Animal Experiment Ethics Committee of Wannan Medical College and meet the requirements of Anhui Province Animal Experiment Management Regulations. Twenty mice were divided into normal group and model group. Mice in the model group were given DSS mixed solution (30g/L in water) for 6 consecutive days, followed by normal drinking water for 4 days. Mice in the normal group were given normal drinking water for 10 consecutive days. The weight and diet were measured from the beginning of model building. The free diet blood glucose and glucose tolerance tests were performed before and after modeling. The liver, colon and pancreas tissues were collected immediately after the mice were killed by dislocation.

Observation and Scoring of Feces of Laboratory Animals

On the 4th day of modeling, the fecal morphology of the normal group and the model group was observed and scored according to the stool scoring standard table (Table 1). The superposition of the score of fecal morphology and the score of blood stool is the result of fecal score. After the establishment of the model, the mice were continued to be fed for 4 days, and the changes of behavior, body weight and diet of mice were observed.

All food and bedding were removed at 5 pm the day before the experiment, fasting for 16 hours, normal drinking water was given during fasting, and glucose tolerance test began at 9 am the next morning. After weighing, blood samples were taken from the tip of the tail to measure blood glucose, which was recorded as 0. Glucose (1.5g/kg body weight) was then injected intraperitoneally and timing began when the first mouse was injected. The blood glucose values measured by 0 min, 15 min, 30 min, 45 min, 60 min, 90 min, 120 min were recorded, respectively. The software prism is used for data processing and statistics. P < 0.05 was recorded as significant difference.

Mouse liver, colon, and pancreas tissues fixed with 4% paraformaldehyde for 24 hours, dehydrated with 15% and 30% sucrose solution for 24 hours, embedded in OTC, and sliced using a cryostat [15]. The sections immersed in Phosphate-Tween Buffer (PBST) for 5 minutes were stained with hematoxylin solution for 10 minutes, then stained with tap water was stopped, the differentiation solution was washed twice, the nuclei were stained with eosin solution for 1 minute and rinsed under tap water for 2 minutes. After mounting the slides, the results were taken under a microscope (OLYMPUS, BX-53), and the colon histology score was performed according to the colon histopathology score sheet.

The colon is scored according to the HE Staining results of colon tissue sections, mainly based on the following scoring table (Tables 2A-2E). The final score is the average score of the five assessments. 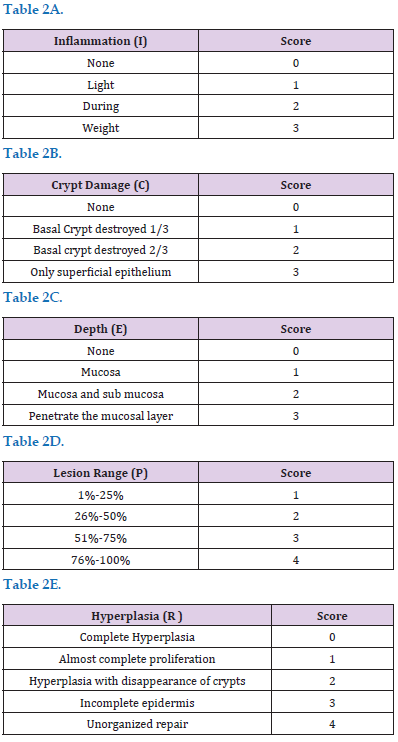 The pancreas sections were immersed in PBST solution for 3 times, 10 min each time. After blocking with 5% horse serum for 30 minutes, add the primary antibody (CD34: INS: PBST=1:5:1000), and incubate overnight at 4 ℃ in the refrigerator. The next day, they were immersed in PBST solution 3 times, 10 min each time. Drop the secondary antibody mixture (donkey anti-rabbit 488 fluorescent secondary antibodies: donkey anti-mouse 594 fluorescent secondary antibody: DAPI: PBST=1:1:1:1000). After incubating for 2hours at room temperature, PBST soaked 3 times. After mounting the slides in glycerol, photographs were taken with a laser confocal fluorescence microscope, and the expression of CD34 and insulin in the islets was calculated.

HE Staining results showed that the structure of the colon of the model group mice was significantly damaged, mucosal epithelial cells were shed, intestinal glands mucosa was missing and glands were destroyed (Figure 2A). The results of colon histopathology score showed that the pathology score of the model group was significantly higher than that of the normal group (11.00±0.8312; Figure 2B). The pancreatic tissue structure is intact and has not been significantly damaged, indicating that the overall structure of the pancreatic tissue in the model group has not been affected (Figure 2C). Simultaneously, the staining of liver sections showed that the histological morphology of the liver was consistent with the normal group (Figure 2D).

The results of Iiimmunofluorescence Staining showed that CD34 molecules were coexist with insulin-secreting β cells in pancreatic tissue of normal mouse (group (Figure 4A). Compared with the normal group, the number of β cells expressing insulin in DSS model mouse group was reduced (Figures 4A & 4B). The statistical results of morphological analysis showed that the number of pancreatic β cells was significantly reduced (Figure 4C). At the same time, the positive expression of CD34 in the pancreas of the model group increased compared with the normal group (Figure 4C). The results showed that mouse colon inflammation significantly damage the glucose metabolism in model mouse group. 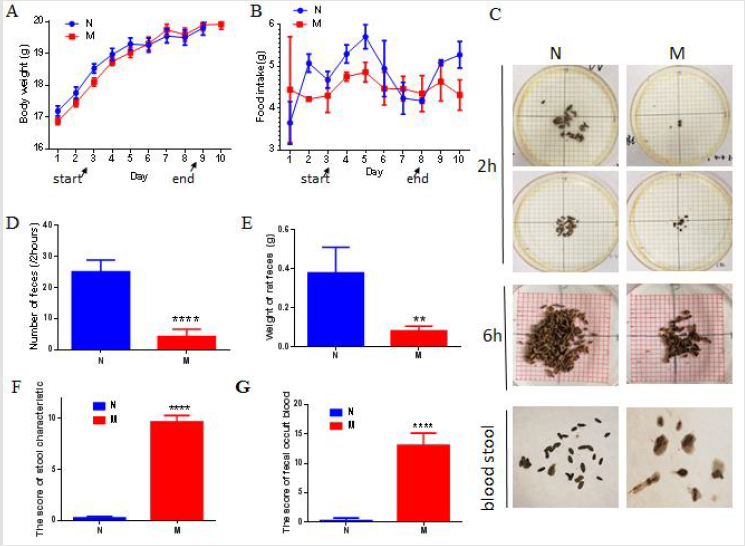 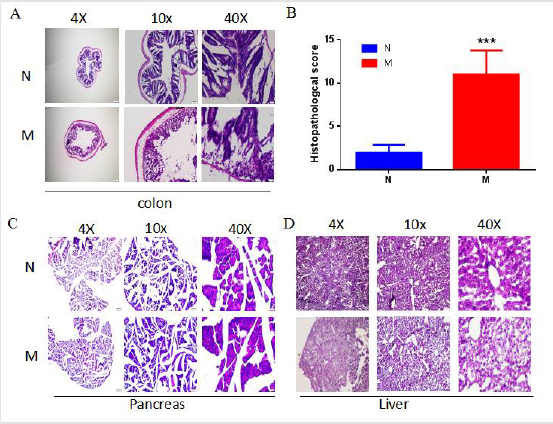 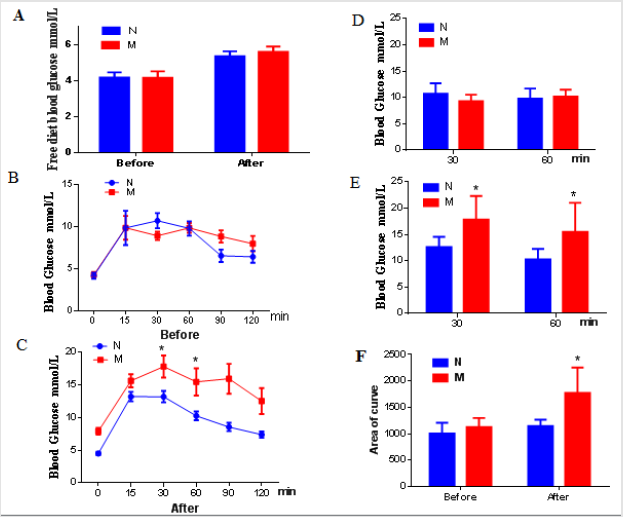 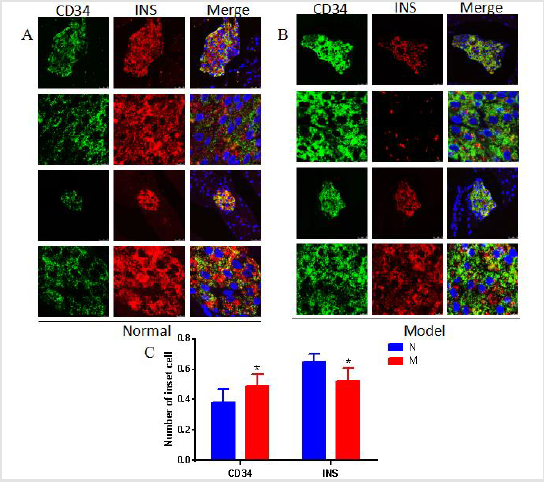 In this study, it was found for the first time that there was no abnormal blood glucose in mice with colonic inflammation induced by DSS, but the blood glucose increased significantly after glucose injection, that is, abnormal glucose tolerance. Colonic inflammation induced by DSS results in a decrease in the number of islets β-cells and a decrease in insulin secretion, which is related to the increase of CD34 molecules expressed on islet β-cells. In recent years, more and more studies have shown that there is a correlation between intestinal inflammation and islet function. In this study, colonic inflammation was induced by administration of 3%DSS solution in mice. The results showed that the number of feces decreased and hematochezia appeared in the model group. HE Staining showed abnormal colon morphology and significant differences in histopathological scores. During the detection of glucose metabolism, it was found that there was no significant change in blood glucose in DSS mice model group with free diet, but the results of glucose tolerance test showed that the glucose tolerance curve of DSS mice model group and the value of blood glucose significantly increased.

Through further morphological examination, we found that the number and proportion of β cells in islets of DSS mice model group decreased. At the same time, the expression of CD34 on β cells is significantly up-regulated. As an adhesion molecule, CD34 participates in intercellular adhesion and plays an important role in the process of migration and cell maturation. In vitro studies have shown that the decrease of CD34 secretion is involved in the normal differentiation of mast cells [16] and the occurrence of diabetes. And CD34 is widely expressed on vascular endothelial cells in colonic tissue of patients with IBD [17] Clinical studies have reported that patients with intestinal inflammation have a higher risk of insulindependent diabetes and higher insulin levels than healthy people [18]. This change may be related to the specific histocompatibility site antigen type. It may also be related to the activation of isletspecific T cells in intestinal mucosa.

We demonstrate that the decrease of islet function caused by abnormal glucose metabolism in mice with colonic inflammation induced by DSS is related to the increased expression of CD34, and its specific mechanism needs to be further studied.

Methods:C57Bl/6 mice (male or female) were randomly divided into normal control group and DSS model group. The mice in model group were given DSS drinking water (30g/L) for 6 consecutive days, while the mice in normal group were given ordinary clean drinking water. The morphological characteristics of stool were recorded, and HE Staining was used to identify colonic inflammation. In vivo glucose tolerance experiments were performed to detect the glucose tolerance of the two groups of mice. Immunofluorescence Staining and morphological analysis were used to detect changes in the structure and composition of islets.

Conclusion: Our study demonstrates that DSS-induced colon inflammation can significantly reduce the number of pancreatic islets β cells and increase blood glucose levels, which may be related to the increased expression of CD34 in pancreatic islets. The present study provides new evidence for the study of the effect of intestinal inflammation on glucose metabolism.