Conclusion: Patients with prior pelvic organ prolapse surgery were more likely to be at risk of de novo urgency after autologous pubovaginal sling. This study provided more information for preoperative consultation for patients undergoing incontinence surgery.

Stress urinary incontinence (SUI) is reported in 10-40% of women and has a bothersome impact on the quality of life [1]. The surgical treatments consisted of mid-urethral slings (MUS), pubovaginal slings, retropubic slings, transvaginal urethral suspensions and urethral bulking agents. Autologous rectus fascia pubovaginal sling was first introduced in the early 20th century, but for the last two decades, synthetic mid-urethral slings have been the main stay of treating SUI. MUS gained its popularity due to shorter operative time, absence of harvest site complications (pain and infection) [2], faster recovery [3], however urologists and gynecologists have growing concerns for synthetic MUS after several statements made by the Food and Drug Administration since 2008 [4]. Autologous pubovaginal sling has been regaining popularity in the recent years, with reported excellent success rates [5]. This procedure is suitable for patients with concomitant urethral diverticulectomy, concomitant urethrovaginal fistula, and post complications failed previous synthetic sling [6].

Between 2011 and 2016, a total of 347 women with SUI underwent pubovaginal sling in a single medical center, this study included only patients using rectus fascia and who followed up postoperative for over a year. The patients with concomitant abdominal surgery, concomitant urethral diverticulectomy and previous diverticulectomy were excluded to eliminate confounding factors in the study population. De novo urgency is defined in patients who did not report urge or urge incontinence, but were treated with anticholinergics or beta3 agonist, intravesical botox injection and sacral neuromodulation. We understand urgency/ urge incontinent treated in a tiered manner; therefore, we recorded the treatment modality seen at the last follow up date. Data were extracted from electronic medical records and charts. Baseline data including age, BMI, prior irradiation, prior hysterectomy, prior surgeries for SUI were recorded. Perioperative details such as “overtight” method, concomitant pelvic organ prolapse (POP) surgery and concomitant urethral surgery were collected. Patients who follow up less than a year, previous or concomitant diverticulectomy, concomitant abdominal surgery were excluded. Descriptive data were presented as mean. The Chi-square and fisher’s exact testes were used to compare categorical variable. The chi-square analysis was done to find a relationship between urgency/urge incontinence and those parameters. A p- value for <0.05 was considered to be statically significant. All analyses were conducted suing the statistical Package for Social Sciences (SPSS) version 24.0. 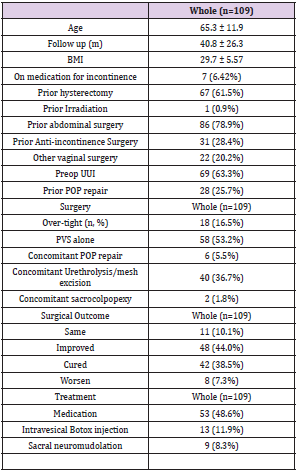 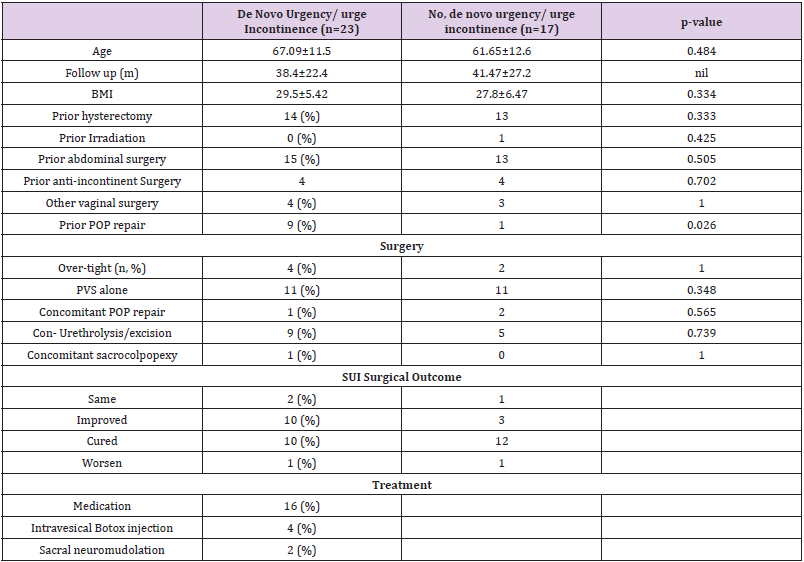 Table 2: Comparison between patients with de novo urgency/urge incontinence and those did not by Chi-square.

Though synthetic mid-urethral sling has been proven to achieve high success rates, the concern for adverse events has made autologous pubovaginal sling regain popularity for the treatment of stress urinary incontinence. The downfalls of pubovaginal slings reported were wound infections, obstructive symptoms and de novo urgency incontinence [12]. This study had identified previous POP repair and over-tight technique to be related to patients seeking for treatment for de novo urgency incontinence after surgery. The etiology of de novo urgency after incontinence surgery has not been validated but causes of de novo urgency after synthetic sling were proposed by Abraham et al, including urinary tract infection, bladder outlet obstruction, perforation of the urinary tract and idiopathic urgency [13]. Similar hypothesis can be implemented in autologous pubovaginal sling, except perforation by foreign body. Other hypotheses included irritation of the vesical neck [14], it is suggested bladder contraction is triggered by urine entering proximal urethra [15], and urethral afferent activity can evoke involuntary detrusor activity [16].

Previous POP repair surgery dissections are speculated to be more extensive therefore resulting in de novo urgency incontinence. Since extensive dissections may be disrupting the autonomic innervation of the bladder, which is also another possible pathogenesis of de novo urgency [20]. Despite much input in attempt to investigating potential risk factors for de novo urgency, there is limited evidence to support a convincing risk factor. A similar study was done, also trying to look for prognostic factors of autologous fascia rectus sling, and none of the preoperative parameters proved to be associated with the final outcome [21]. Kenton et al was also unable to find an association between any other preoperative symptoms, urodynamic parameters or patient characteristics and postoperative treatment or bother form UUI [18], after they looked into patient’s status post Burch colposuspension and pubovaginal sling. The urodynamic parameters related urgency post-sling procedure have been studied. Alperin et al noticed an elevation of detrusor pressure >15cm H2O during the filling phase of cystometry put patients at risk of developing de novo urgency incontinence [19].

However, urge/ urge incontinence was self-reported, unlike in this study, the patients were included only if they were treated. Mitsui et al. investigated the clinical and urodynamic outcome of autologous pubovaginal, found out patients who had PVR more than 100mL or Qmax 20mL/s or less were more likely to have voiding problems. No urodynamic parameters were reported to associate with urgency/urge incontinence but noted postoperative urgency and de novo urgency rate as 38% and 8% respectively [20]. Heterogeneous findings in identifying risk factors for de novo urge/ urge incontinence were present in our literature review. Not all literatures found urodynamic parameters to be risk factors [18,21]. The presence of detrusor overactivity, history of prior anti-incontinence surgery was reported to be risk factors of de novo urgency/ urge incontinence, while poorer anterior and apical vaginal support were “protective” factors after mid urethral sling [10].

Another study found preoperative urge, detrusor overactivity and prior use of anticholinergic mediation were more likely to develop de novo urgency/urge incontinence after autologous sling and/or Burch procedure [18]. However prior medication did not show significance in our result. The limitations of this study were a retrospective and single center study. Our study number would have more statistical power if we have a larger cohort, however de novo urgency is not a common sequela but a very bothersome symptom after pubovaginal surgery. This study was a snapshot in time, treatment modality was recorded as their last clinic visit. There was no follow up on the change of treatment over the course of time, given that urge/urge incontinence treatment is tiered. Therefore, a follow up outcome of those treated is a future aspect of research. There was no literature available on studying the possible risk factors to de novo urgency/ urge incontinence after autologous pubovaginal sling. We a relatively long follow-up period of time.

De novo urgency/ urge incontinence may be troublesome and affects the daily life of patients, therefore it is important in informing and discussing with the patients of such condition. Our study found prior pelvic organ prolapse surgeries as possible risk factors related to postoperative de novo urgency, hoping to give more information in consultation for autologous pubovaginal sling.

The authors declare that they have no conflicting interests.

Conclusion: Patients with prior pelvic organ prolapse surgery were more likely to be at risk of de novo urgency after autologous pubovaginal sling. This study provided more information for preoperative consultation for patients undergoing incontinence surgery.