Bone morphogenetic proteins (BMPs) are essential factors in regulating cell differentiation, proliferation, motility, and survival during embryonic, postnatal development, and tissue development. Recently aberrant expression of BMPs is implicated in multiple cancer studies suggesting a role in tumorigenesis and promoting cancer progression in different stages. Here, we have briefly summarized the significance of BMP in embryonic development and its dysfunction in cancer and the molecular regulation of BMP-related signalling pathway. The review aims to provide a brief overview of the biological and pathological importance of BMP signalling and the possibility of it being used as disease and therapy targets for better outcomes for the patients.

Development of a unicellular zygote to a multilayered organised embryo, involves complex growth cues from specific growth factors, strictly regulated cellular division and series of lineage specification events. These two major events include the formation of a blastocyst, at embryonic day (E) 3.5, followed by gastrulation when cells then go on to form either the outer trophectoderm (TE) or inner cell mass (ICM), from which the epiblast (Epi,) or primitive endoderm (PrE,) [1] is derived (Figure 1A). First known for their ability to induce bone formation, members of Bone Morphogenetic Proteins (BMPSs) are now known to play crucial roles in in the regulation of a multiple developmental processes including formation of meso and endodermal lineages [2-4] and PGC specification [5-7] during early embryonic development.
During gastrulation, BMP signalling acts through a receptor complex including BMP receptor type II and ALK3/6, which results in SMAD1/5 phosphorylation. Phosphorylated SMAD1/5 form a complex with SMAD4 and translocate to the nucleus to control target gene expression that direct cellular processes for PGC specification, and formation of mesodermal lineages as evidenced in human and mice (Figure 1B) [3,8]. Among the various BMPs, BMP4 is necessary to induce PGCs, while BMP8b an inhibitor of BMP4 signalling regulates the development of the visceral endoderm [9,10]. Additionally, expression of BMP2 in visceral endoderm surrounding the epiblast augments the BMP4 signal in the posterior of the embryo. The essential functions of BMP signalling factors is highlighted by embryonic lethality of knockout mouse models of different components of the BMP signalling pathway. BMP4 deficient mice lacks mesoderm and have no primordial germ cells. BMP heterozygotes are viable but have a wide variety of abnormalities [11] reconfirming their essential role in PGC and essential for developmental processes as early as gastrulation.
Furthermore, BMP4 is also implicated in mouse ES (mES) cell self- renewal and regulating fate choices during stem cell differentiation [12]. For example, during stem cell differentiation BMPs direct mesenchymal cells to differentiate in chondrogenic and osteogenic cell lineages [13]. However, as in the mouse embryo, BMP can also promote mesendodermal differentiation of mES cells [14,15]. Additionally, BMP signalling has shown to induce inhibitory signals to neural differentiation [16,17] and inhibiting BMP signalling during mESC differentiation promotes differentiation of neural ectoderm. Inhibitors of BMPs are recently characterized as BMP antagonists. Although BMP antagonists often exert biological functions as inhibitors of BMP action, in some cases, they function as activators of BMPs during distinct phases of development, adding a complex feedback mechanism. In vivo experiments have verified that this process controls intrinsic inhibitors of bone morphogenic protein (BMP), Activin/Nodal signalling [18].
Similarly, in-vitro stem cells differentiation systems where Noggin or the invivo BMP inhibitors are introduced, cells undergo neuroectodermal fate [19]. On the other hand, addition of BMP agonist promoted mesodermal and PGC specification during ES cell differentiation. Furthermore, conditional gene targeting was used to confirm the role of BMP signalling during PGC migration in vivo, which demonstrated that BMP signalling controls cell survival and possibly cell identity within the genital ridges representing an early and probably transient PGC niche that is established in the genital ridges before differentiation of the Sertoli or granulosa cell support lineages [20]. 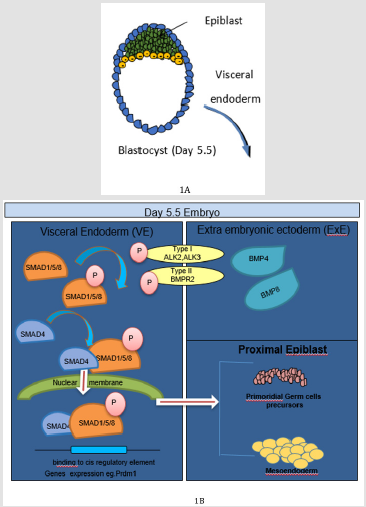 Figure 1: BMP signaling in early embryonic development. A: Representative image of Day 5.5 blastocyst. B. At Day 5.5–6.0 embryonic day BMP4 secreted by the ExE binds to BMP receptor complexes consisting of BMP receptor type II and ALK2 in the VE, which results in Smad1 phosphorylation and transcriptional regulation of BMP target genes. Among these target genes, an unknown factor (or factors) directs proximal epiblast cells toward a PGC and formation of meso-endodermal lineages.

BMPs and Their Association in Cancer

The irregular expression of BMPs is also indicated to be related to cancer cell proliferation, differentiation, and apoptosis. Specific BMPs are now used as new biomarkers for the prognosis of cancer patients [21,22]. It has been hypothesized that BMP signalling induces SMAD8 phosphorylation, which then forms a heteromeric complex with the common mediator Smad4 and is translocated into the nucleus. Inside the nucleus, the Smad8/Smad4 heterodimer itself or other Smad-interacting proteins or cofactors bind to DNA and mediate specific transcriptional activation or repression responses which may involve repression of tumour suppressor or activation of oncogenes. Possibly, there are numerous other signalling pathways such as the PI3K/Akt, P/kc, Rho-GTPases, Ras-MEK pathway, that BMP signalling has been found to interact, and could modulate their action by establishing crosstalk among the different pathways [13]. For example, the family member BMP-9 phosphorylates SMAD1, 5, and 8 and the overexpression of inhibitors of DNA binding 1 (Id1), promoting a proliferative response and exerting an anti-apoptotic function in hepatic cancer cells. BMP-9 expression is also linked to ovarian cancer. BMP-9 led to cyclinD1 protein upregulation and inhibited the expression of CDK-interacting protein p27, causing a dual effect inactivation cell proliferation and division. The BMP-downstream signalling effectors such as SMAD1, 5, and 8 are shown to promote tumours, for e.g, in hepatocellular carcinoma (HCC), high expression levels of several BMPs (BMP-4, -6, -7, -8, -9, -10, -11, -13, and -15) are related to poor prognosis [20, 23].

The role of BMPs in tumour progression and dissemination has been widely published in previous studies. However, some studies revealed an opposite role of BMP signalling in tumors. BMP- 10 [28-30] seems to be downregulated in gastric cancer samples. BMP-6 expression was absent in breast cancer tissues and might suppress breast cancer metastasis. Inhibition of BMP signalling significantly downregulates protein levels of multiple mitotic checkpoint components, leading to increased cell division and tumourigenesis, whereas an upregulation of BMP signalling has the reverse effect in breast cancer cells. For instance, BMP-2 and BMP-7 function as tumor suppressors in multiple solid tumours, where it suppresses tumor growth by reducing the expression of oncogenic factors and promoting the expression of cell differentiation inducer proteins [31]. In hepatocellular carcinoma (HCC), BMP-2 induces the expression of the pro-apoptotic protein’s caspase-3 and cleaved caspase-3 leading to increased apoptosis and plays an anti-cancer protein [31-34].
Similarly, In HCC, the inhibition of the BMP-4/SMAD1 signaling has been reported to suppress tumor migration, invasion, and EMT [35]. Moreover, BMP-4 and BMP-9 were also found to be potential anticancer agents in many cancer. Expression of BMP-4 reduces the number and activities of myeloid-derived suppressor cells (MDSCs) by declining the secretion of granulocyte colony-stimulating factor (G-CSF). BMP-9 is also shown to inhibit bone metastasis of breast cancer cells by downregulating connective tissue growth factor expression [26]. It induces apoptosis in prostate cancer cells’ growth, which is related to the upregulation of prostate apoptosis response 4. In many solid tumors, BMP-4 paraclinically inhibits tumor angiogenesis via the induction of thrombospondin-1 (TSP- 1). Sometimes, SMADs in the BMP signaling pathway are also linked to tumor suppression. Knocking down SMAD1 and SMAD5 promotes metastatic granulosa cell tumorigenesis in somatic cells of male and female gonads of mice, which implicated SMAD1 and SMAD5 as critical tumor suppressors [36].
In conclusion, BMPs are described as both stimulator and inhibitor in different cancers; thus, we cannot simply outline BMPs as oncogenes or anti-oncogenes. Together, the aforementioned evidence indicated that the effects of BMP signaling on tumor progress depends on the cell types and the tumor microenvironment. Therefore, it’s important to analyse the BMP bilateral effects in tumorigenesis and the underlying signaling pathways regulating the enigmatic dilemmas rom the translational medicine perspective. Such analysis may also affect the choice of specific BMP inhibitors, with varying selectivity, should these agents become available in the clinic.

Bone morphogenetic proteins (BMPs) are essential factors in regulating cell differentiation, proliferation, motility, and survival during embryonic, postnatal development, and tissue development. Recently aberrant expression of BMPs is implicated in multiple cancer studies suggesting a role in tumorigenesis and promoting cancer progression in different stages. Here, we have briefly summarized the significance of BMP in embryonic development and its dysfunction in cancer and the molecular regulation of BMP-related signalling pathway. The review aims to provide a brief overview of the biological and pathological importance of BMP signalling and the possibility of it being used as disease and therapy targets for better outcomes for the patients.