Objective: The proposal of the studying was to investigate the protective effect of Limb ischemic precondition or Dezocine pre-treatment in acute stress-related gastric mucosal injury.

Acute gastric mucosal lesions refer to acute inflammation of the gastric mucosa [1,2], Symptoms including gastric mucosal congestion, edema, and erosion [3-5]. Its main feature is the superficial injury of the gastric mucosa [1]. There are many reasons for gastric mucosal lesions. The main cause is considered as: Under the circumstance of stress [1,6], the inner body of animals or humans will redistribute blood flow, resulting in a decreased gastric mucosal blood perfusion, leading to ischemic necrosis [7]. If reperfusion occurs, the ischemia-reperfusion injury will occur [6,8]. Under severe stress, such as severe trauma, burns, and severe cranial trauma, gastric mucosal ischemia can be very severe and even massive bleeding, leading to poor treatment and delaying recovery of patients [1,8]. Opioids are frequently used for clinical analgesic treatment and intraoperative stress regulation. Studies have shown that the prophylactic use of opioids can reduce the stress state of patients in surgery, attenuating ischemiareperfusion in heart [9,10], kidney [11-13], liver [14] and gastric mucous membrane, leading to a reduction in stress-related injuries, including gastric mucosal damage. Studies have reported that pretreatment with fentanyl or sufentanil before stress attenuates ischemia-reperfusion damage [9,10,13,14].

Among them, K opioid receptors may have an important role. Dezocine, a weak agonist of u opioid receptors and a strong agonist of K opioid receptors, is used prophylactically before stress or has some effect in preventing cerebral ischemia-reperfusion [15]. Studies also have found that by short-term ischemia-reperfusion treatment of organs or tissues far away from the target organ [16,17], the same protective effect as the direct pre-treatment of the target organ can be achieved. A series of studies have shown that the ischemic preconditioning of the distal limbs has a certain protective effect on the distal organs, such as heart [18], lung, liver, kidney [19], and brain [18,20,21]. The main mechanism of the protective effect of Limb ischemic preconditioning (LIPc) may include improving liver energy metabolism and microcirculation, reducing free radical production, inhibiting the activation of inflammatory cells and apoptosis, and inducing the release of endogenous protective substances [8,12,14,22,23]. We speculate that LIPc can also have some protective effects on acute gastric mucosal lesions. In this article, We designed a comparison between LIPc and Dezocine Pre-treatment in rats to observe their protective effects on gastric mucosa under acute stress.

Rats are induced with isoflurane inhalation and continue to inhale 2% to maintain anesthesia. The rat was fixed to a self-made rat holder with four limbs fully stretched the root of the right thigh was tied with a bandage until the femoral artery pulsation disappeared (blood flow was blocked) and the sole of the foot showed ischemic signs. After blood flow was blocked for 5min, a bandage was release for 5min, one block time and one release time was considered as one cycle of LIPc. LIPc was performed when the rat was anaesthetized.

After rat shoulder was picked up by index finger and thumb grasping and alcohol disinfected the rat shoulder skin three times, 10 μg/g of dezocine was injected into the skin base using a 25g injection needle. After the injection was finished, the kneading was lightly pressed to make the group mark and placed inside a ventilated cage. And they were Waiting for the next operation.

All the pre-treated rat as inducing with isoflurane in isoflurane inhale jam. After induced, the rat was fixed to a self-made moveable rats’ holder with four limbs stretched. After the rat was fully recovered from Isoflurane, it was immersed into a 4 degrees Celsius water tank with the water level to the rat neck for 6 h and then taken out.

The rats were killed by decapitation, the abdominal cavity was opened, and the stomach was taken out. The stomach was cut along the greater curvature of the stomach and then laid flat, washed with cold saline, and the gastric mucosa was observed under a 10x microscope. Assessing gastric mucosal injury index (GI) according to Guth standard [24]: spotting bleeding point 1 point, erosion 1cm 2 points, erosion 1~2cm 3 points, erosion 2~3cm 4 points, erosion 3cm 5 points, 2mm width Score 2, all scores are added up as GI score. After GI scored, a soy-sized stomach tissue was fixed in 4% neutral formaldehyde, embedded in paraffin, and stained with (Hematoxylin and Eosin) HE, and then histological examination was performed. Malondialdehyde (MDA), Superoxide Dismutase (SOD) and Myeloperoxidase (MPO) were measured by the colorimetric method with analysis kits (Jiancheng, Nanjing, China).

All the animals were beheaded with a sharp knife after isoflurane inhaled, all data was collected follow the plan following the research flow chart, see Figure 1. There was no significant difference between 3 groups at Ages and Weights. 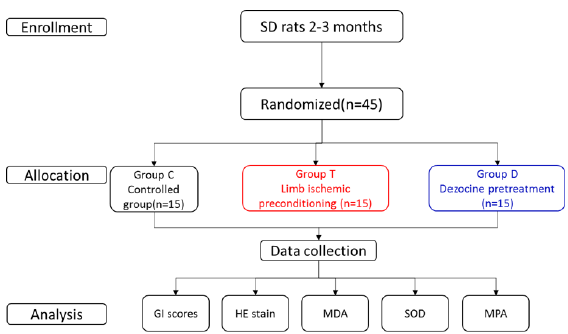 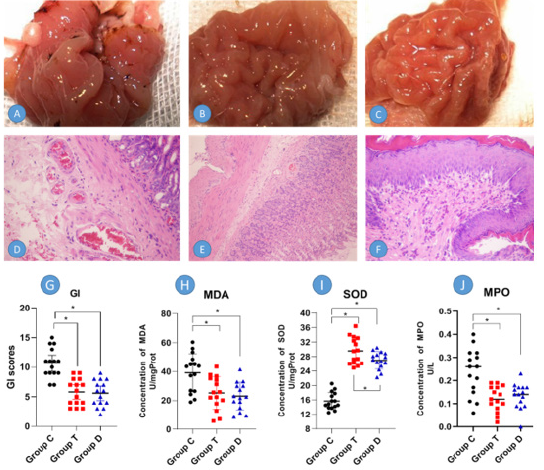 The results of our research showed that limb ischemic precondition and dezocine pre-treatment can all had the potential of gastric mucosal lesions under acute stress, evidence including less bleeding point, Lower GI scores and less the inflammatory response around gastric mucosal. Research showed that remote ischemic precondition was a promising method for protecting organ Ischemia-reperfusion of many surgery, including cardiac surgery, liver surgery, esophagectomy, kidney transplanting, etc. [16-21,25]. In cardiac surgery and advocating its practicing in regular clinical activity [26]. Gastric mucosal was vulnerable to acute stress, such as cold water immersed for a long time(>2h). research also show that remote precondition can have some effect on Gastric Mucosal. In this study, the low limb was selected as the remote ischemic precondition site because of its maneuverability in rats. In this study, after 5 cycle of LIPc, it shows promising protection of gastric mucosal.

Opioids were reported of having gastric mucosal in acute stress by several pieces of research [9,11-13]. The drugs including morphine, fentanyl and sufentanil. Mu opioid receptor (MOR) playing some roles in the protective effect [9-11,13], while k opioids receptor could play a more important role in the gastrointestinal system [27]. Dezocine was reported as weak MOR agonists and a potent KOR agonists [15,28,29], which could be a better choice after gastrointestinal surgery in postoperative analgesia [30]. Results in this study showed that: Dezocine could also have an effective gastric mucosal protection under acute stress, similar to LIPc in GI, MDA and MPA, but lower SOD lever (P=0.048, CI=95%). This may relate to the pathway of these two methods: LIPc was evoking the potential anti-ischemia-reperfusion effects by increasing protective substance release by local tissues [26]. In comparison, opioids were protecting gastric mucosal of stress by Inhibiting of sympathetic nervous system [30].

No conflicts of interest need to be declared.

Objective: The proposal of the studying was to investigate the protective effect of Limb ischemic precondition or Dezocine pre-treatment in acute stress-related gastric mucosal injury.