Background: It has been estimated that up to a quarter of young to middle-aged adults have at least one tattoo. As more tattoos are being acquired, increasing numbers of people are also seeking their removal. The number of tattoo removal procedures is still growing. The motivation for tattoo removal includes new jobs or careers, the need to portray a certain image at work or in new social circles, and new, negative feelings towards old tattoos or sometimes tattoo went very bad. Unfortunately, laser tattoo removal is generally more costly, more painful, and takes more time and more patience to have it done. Tattoos are created by the introduction of exogenous pigment into the dermal skin layer and be divided into professional, amateur, cosmetic, traumatic, or medical tattoos. Professional tattoos are applied with a tattoo machine into the deeper layer of the dermis and are permanent in nature. Cosmetic tattoos are often referred to as permanent makeup, are becoming to be more popular.
Objectives: The aim of this paper is to demonstrate how a unique protocol of R20M™ method can be used successfully in removing cosmetic tattoos, in skin type III, in an effective disciplined timing and cost wise modalities. In the proposed combination method R20M™ after the patch test, when all settings are established, the skin is prepared with numbing cream and a Fiflow® mixture of Perfluorocarbons (PFC). First pass was performed with Er:Yag fractional ablative laser followed by three subsequential passes with Q-Switched (QS) Nd: Yag are performed. PFC is applied immediately after the treatment.
Methods and Results: 30 years old lady was shown in Biotec Italia UK (London, UK) office with light- grey liner on her lips. After application of R20M™ method immediately after one session satisfactory results observed. No adverse reactions were noted.
Conclusion: The R20M™ technique is very effective tool in a single treatment session than the conventional multiple laser sessions, in tattoo removal, and I would invite other practitioners to utilize it in their clinical setting. This method does not need any newer laser technology, clears the tattoo fast, and cuts down unnecessary treatment duration and cost.

It has been estimated that up to a quarter of young to middleaged adults have at least one tattoo. As more tattoos are being acquired, increasing numbers of people are also seeking their removal. The number of tattoo removal procedures is still growing. The motivation for tattoo removal includes new jobs or careers, the need to portray a certain image at work or in new social circles, and new, negative feelings towards old tattoos or sometimes tattoo went very bad [1]. Tattoos are created by the introduction of exogenous pigment into the dermal skin layer and be divided into professional, amateur, cosmetic, traumatic, or medical tattoos. Professional tattoos are applied with a tattoo machine into the deeper layer of the dermis and are permanent in nature. Cosmetic tattoos are often referred to as permanent makeup, are becoming to be more popular. Permanent eyeliners, eyebrows, and lip liners are commonly applied using the process of sparse micro-pigmentation to save time and enhance facial features such as lips, eyelids, eyebrows. Inks used usually contains red, brown, or flesh-like pigments containing iron dioxide or titanium dioxide, that is why they ate difficult to remove. They may turn black after Q-switched (QS) laser treatment. Chemical reduction of ferric to ferrous oxide is thought to be responsible for such a phenomenon. Such paradoxical darkening has been successfully treated with further QS laser treatments, sometimes requiring up to 20 sessions. Unfortunately, laser tattoo removal is generally more costly, more painful, and takes more time and more patience to have it done.
Q-switched (QS) lasers are the gold standard in tattoo removal. As per the Theory of Selective Thermolysis, the laser pulse duration is critical and should be equal or shorter than the Thermal Relaxation Time (TRT) of the target chromophore. Tattoo ink granules measure 0.1μm and their TRT has been estimated to 10ns. QS laser is characterized by the release of a high amount of energy in an extremely short time – Nanoseconds (ns) or Picoseconds (ps). The violent and rapid thermal expansion induced by light absorption generates shock waves audible as a popping sound with each laser pulse with potentially localized cavitation leading to vacuoles [2].
The administration of energy in such a short pulse leads to a rapid thermal expansion of the target, that is, subsequently fragmented by the release of an acoustic wave that leads to destruction and ‘’cutting’’ tattoo pigment. The disintegration of pigments into smaller granules allows macrophages to phagocyte fragments and to carry them away via the lymphatic system. Phagocytosis is subsequently triggered and the tattoo fragments are packaged for lymphatic drainage and further scavenged by dermal macrophages, fibroblasts, and mast cells, leading to a lightening of the tattoo. The pigment treated this way gradually becomes shallow until it disappears, while no injured trace will be left on the peripheral tissues making the treatment selective and safe.
On laser impact, the immediate flash of white light from the tattoo is followed by epidermal whitening and slight edema. Immediate tissue whitening is a sign of rapid, localized heating with steam formation, resulting in dermal and epidermal vacuolization. Some pinpoint bleeding may be observed (most likely represent indirect vascular injury from the photo-acoustic waves [3].
The immediate whitening phenomenon is a good marker for melanosome destruction and resolves within 10-20 minutes approximately. It should be considered as a treatment end-point and if not observed, it is likely that the laser exposure dose is not sufficient. Frosting made by application of Q switched laser prevents entrance of laser light within the dermis [4]. In 2012 R20 method protocol was proposed by Kossida [5], in which up to 4 passes of laser are allowed, with subsequently 20 minutes waiting between the passes. It was hypothesized that after the subsidence of frosting in the event that we deliver laser, at that point it can enter more profound within the dermis hence focusing on more dermal ink. It can also fragment the ink particle into smaller pieces thus allowing faster clearance of ink by macrophages. It is more effective than the traditional method. The number of sessions required for tattoo removal is greatly reduced thus decreasing the number of visits to the clinic and increasing patient compliance. However high risk of darker phototypes patients scarring was observed.
Cosmetic tattoos show many peculiar characteristics, so their removal requires specific considerations. Permanent makeup inks are different from regular tattoo inks as they often contain a higher percentage of inorganic matter and oxides- used for their reflective purposes. Some of the semi-permanent makeup is resistant. As suggested by Cannarozzo G, et al. [6], a single passage with fractional ablative Er:Yag laser was used as the first pass, to induce an ink clearing and to reduce the possibility of scar formation [6- 8]. Perfluorocarbons (PFCs) are micron-sized non-toxic, chemically, and biologically inert compounds with unique physical properties that enable their use in a wide range of medical applications. It helps to heal wounds, possesses a bubbling effect. It is a stable, heavy liquid and has no flashpoint. Perfluorocarbons have potential additional benefits including reduced collateral thermal tissue injury due to tissue compression owing to its high specific gravity [9,10]. Absorption via the epidermis of topical products is limited by the barrier role of the skin. Laser-Assisted Drug Delivery (LADD) which, due to its ability to produce microscopic ablated channels, often uses ablative fractional lasers to enhance drugs absorption. It is necessary to adapt the parameters of LADD to the patient, the skin condition and its location, and the drug [11]. During a laser tattoo removal procedure, when ink granules undergo a rapid temperature increase, which subsequently heats the surrounding PFC liquid while simultaneously producing an ultrasound pressure wave. The total treatment time is thus reduced from 80 min to 5 min.

30 years old lady was shown in Biotec Italia UK (London, UK) office with light- grey liner on her lips as a leftover of her permanent makeup applied 8-9 years ago. (Figure 1). She was healthy and has no other complaints. Lady undergo consultation and patch test where written consent was obtained. In the Biotec Italia UK office I’ve used R20M™ method, where nanosecond Q-switched Nd:Yag laser 1064 nm , fluency 4.1 j/cm2, 1064 pulse length at 9ns with frequency of 1 HZ, and spot size 7 mm (Xlase Plus, Biotec Italia) was combined with pass of Fractional Ablative Er:Yag laser 2940 nm (Xlase Plus, Biotec Italia) The whole idea was about introduce PFC using LADD technique deeper, to reduce number of the treatment and to remove difficult- light grey liner on her lip. I aimed as well to reduce possibility of the scarring to the minimum. This method is registered as the R20M™ method. The R20M™ method uses 4% perfluorocarbons- Fiflow®. (Perfluorohexane, Perfluoroperhydrophenanthrene, Perfluorodecalin, Perfluorodimethylcyclohexane.) Which according to the patent is a non-allergenic medical device intended for topical application. Micron-sized, non-toxic, chemically and biologically inert compounds are Perfluorocarbons (PFCs) with specific physical properties that allow them to be used in a wide range of medical applications. Their usage speeds up the healing process, among other things, but they also minimize thermal side damage to tissues due to their high specific weight, minimizing the risk of scarring. When the ink granules experience a rapid temperature increase during the laser tattoo removal process, which in turn causes the surrounding fluid to heat up - and the skin frosting mentioned above, PFC, simultaneously produces an ultrasonic pressure wave to compensate for this effect. Prior to first treatment and application of PFC the treatment area was cleansed with 70% isopropanol and let dry. 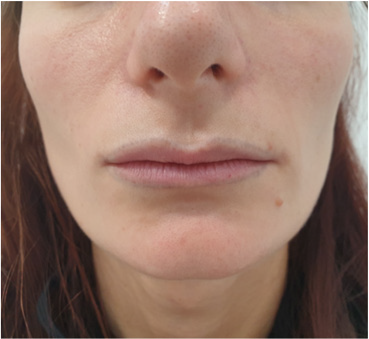 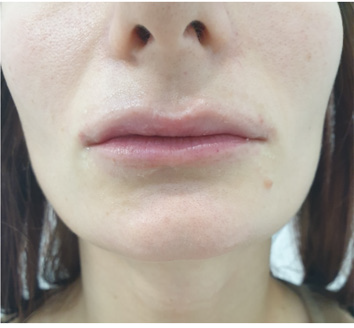 Q-switched lasers emit short, deep high-intensity pulses, which cause thermo-mechanical destruction via photoacoustic waves leading to fragmentation of tattoo ink. Ultimately, phagocytosis follows into gradual clearance. Nonetheless, the treatment course is often prolonged and expensive as it involves multiple sessions and results are frequently unpredictable which may ground patient dissatisfaction. A study conducted by Kossida et al on Greek population illustrated that multiple passes of Q-switched laser treatment given with about 20 minutes distant in comparing to the conventional laser de-livery would result on noticeable results. However it is time consuming, and as found on later- can increase the possibility of scarring. Combination method using Ablative fractional laser allows practitioners to reduce possibility of scaring on delicate- lip area of the cosmetic tattoo. LADD with assistance of perfluorocarbons employed in R20M™ methods enhances safety reduces the number and time of the treatments and need to be tested on larger amount of participants in the future. In my patient, it worked quite well and this adopted modification saved her cost and multiple sessions, improved efficacy, and demostarted no longterm complications as the images can display.

As with any therapeutic conduct, there is some level of uncertainty with laser tattoo removal. In the proposed protocol, ablative fractional lasers and Q - Q-Switched (QS) lasers with the application of Perfluorocarbons (PFC) gives faster and safer clearance of unwanted tattoos and minimizes possibility of scarring. Also it is time- saving and cost effective.

Moderna and Pfizer-BioNTech’s “pseudo-vaccines” for COVID-19 contain mRNA enveloped by lipid nanoparticles (LNP) and polyethylene glycol (PEG). None of these 3 components have been approved for vaccines or parenteral drugs. Research has shown that LNPs easily enter the brain and can trigger immune reactions, especially after the second dose. More than 70% of the American population is allergic to PEG, so these vaccines can cause allergic reactions and anaphylaxis

There are well-founded suspicions that these vaccines can insert themselves in our DNA, causing mutations whose impact is unknown and that could even be transmitted to our offspring. We explain how the mRNA existing in the cell cytosol can enter the nucleus both during cell division (mitosis and meiosis) and at rest (interphase). In addition, the possible routes of integration of DNA and RNA in our chromosomes through reverse transcripases (RT) are discussed, especially in sperm where a specific endogenous RT has been identified.