32 year old male patient presented with abdominal pain and vomitings. Initially diagnosed with subacute intestinal obstruction he was managed conservatively and discharged in a stable condition after 48 hours. However patient presented again with the same symptoms and underwent diagnostic laparoscopy followed by exploratory laparotomy and was found to be having intestinal obstruction secondary to this rare entity called abdominal cocoon(sclerosing encapsulating peritonitis).

A 32-year old male presented with a one week history of colicky abdominal pain, vomiting and abdominal distension. He has similar episode almost 6 months ago which were treated conservatively. As a routine he was investigated viaxray abdomen as well as ultrasound abdomen and with an impression of subacute intestinal obstruction he was admitted. We started with a conservative approach of keeping him nil per oral, Ryle s tube was inserted as well as a foley s catheter was inserted. He was managed for 48 hours following which he improved and was discharged with a plan for upper Gi endoscopy at a later time since he was complaining of gastritis as well. However patient presented again within two days and this time with severe abdominal pain and distension. He looked dehydrated. Upon abdominal examination: He was tender with normal gut sounds. He was admitted Xray abdomen showed subacute obstruction however it was a second attack within less than a week so we took him for surgery. Diagnostic laparoscopy was done to begin with however due to distended bowel loops the procedure was converted to open with a vigorous midline abdominal incision. Exploration of bowel showed a huge distended area of small bowel starting from approximately 15cm proximal to ileocecal junction upto the cecum. There were some adhesive inflammatory bands encircling the bowel loops however did not seem to lead to this kind of intestinal obstruction and bowel dilatation. Resection of Bowel done approximately 20cm involving the small bowel upto proximal ascending colon.

Another astonishing thing was that the entire length of small intestine was short as well. However after resection Ileoascending colon anastomosis was done (Figure 1). Pelvic drain was placed. Patient was kept in intensive care unit for 2 days and following that in ward. Day 3 post operatively patient was taken up for a ct scan abdomen with oral and IV contrast which showed a new finding of mesenteric vein thrombus in the vicinity of superior mesenteric vein supplying distal small bowel and colon. Patient was started on anticoagulants and after improving w=discharged on day 6th. Biopsy report concluded the disease to be sclerosing encapsulating peritonitis. Retrospectively Ct scans were being reviewed and radiologist could conclude the presence of a pseudomembrane around the entire small bowel forming a sac confirming the diagnosis of abdominal coccon. 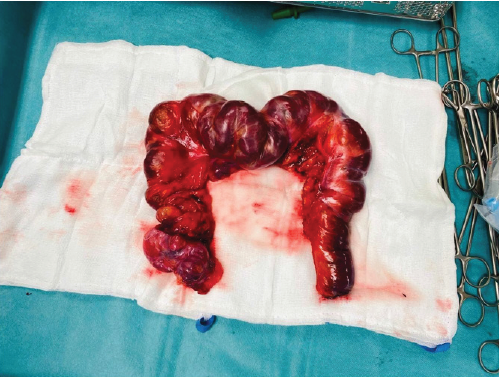 Abdominal cocoon is a rare cause of intestinal obstruction [1]. For theoretical purposes it has been classified as primary and secondary where the cause for primary is also not proven but has been related to hypothesis of an underlying peritonitis [2,3]. Secondary can be related to presence of a VP shunt, patients on peritoneal dialysis and etc [3-5]. In the disease which is quiet a rare variant where the small bowel is encapsulated with a thin jelly like membrane causing obstruction of small bowel [5]. At times this small gelatinous layer of small bowel causes forms a mass like lesion giving a complete obstruction to intestine. Not much have been reported in literature with regards to same however our case is interesting with the fact that patient also developed mesenteric vein thrombus due to an unknown reason.

Hence proved Abdominal cocoon, also known as sclerosing encapsulating peritonitis is a rare disease and presents with intestinal obstruction most the times. Surgeon needs to have a high index of suspicion with regards to its evaluation and prompt treatment is necessitated like in our case to relieve obstruction.

32 year old male patient presented with abdominal pain and vomitings. Initially diagnosed with subacute intestinal obstruction he was managed conservatively and discharged in a stable condition after 48 hours. However patient presented again with the same symptoms and underwent diagnostic laparoscopy followed by exploratory laparotomy and was found to be having intestinal obstruction secondary to this rare entity called abdominal cocoon(sclerosing encapsulating peritonitis).