We present a 33-year-old woman suffering from recurrent bronchitis, dyspnoea and breast pain. Her past medical history was normal. In the trans-thoracic echocardiogram, no abnormality could have been detected. However, chest X-ray and MRI showed a 9x7 cm cyst in the left mediastinum. The patient was treated performing a sternotomy and the cyst could be removed without opening the pericardium. The patient was discharged on the eighth day after surgery. The pathology-report did not confirm the preoperative diagnosis of a pericardial cyst, but showed thymic and pancreatic tissue, suspicious for a mature teratoma. Giant cysts in this location are rare. A literature review will be presented in addition to the current case report.

In this case report, we introduce a young patient suffering from a giant benign mediastinal cyst, suspicious for a pericardial origin. The patient had rather typical symptoms such as dyspnoea, recurrent bronchitis and non-regular breast pain. Other less frequent symptoms like haemoptysis, pneumothorax and were not observed. Pericardial cysts are rare especially of this size. The estimated incidence is 1:100 000. Their diameter is usually between 1 - 5 cm [1,2]. In over 2/3 of the cases pericardial cysts are found in the right cardio phrenic angle [2]. They are mostly incidentally found and often without any symptoms at all, although in few cases compression related symptoms have been observed. Pericardial cyst calcification or rupture occur rarely [3]. We carried out a literature review which revealed 18 cases listed from 2000 to 2020 in PubMed (Table 1). In the following text, we will discuss the different kind of performed examinations, therapy options and histology. No difference in the incidence between males and females has been reported (4). Other cysts in the mediastinum are bronchogenic (34%), enteric (12%), thymic and others (21%) [4,5].

A 33 year old female, turkish patient presented herself with unregular episodes of bronchitis, last time 3 months ago, and episodes of breast pain. A CT and MRI performed at time of first contact showed a 9x7 cm measuring, cyst located at the right-sided pericardium and mediastinum. Also, cysts in kidneys and liver were described. We performed a chest X-ray which also showed the tumour. The apical four chamber view of the trans-thoracic echocardiography showed, normal left and right ventricular function and size and a bicuspid aortic valve but otherwise no signs of a valvar disease. No tumour could be in this examination. The ECG showed a normal SR. The lab tests revealed a slight elevation of CRP (21.4 mg/l) but a normal white cell count (7.7 G./l). Tumour markers were negative, but antibodies for hepatitis A were detected. The urinary status showed a fungus caused, urogenital infection (Figure 1). During the operation a full sternotomy was performed and we managed to expose/develop the cyst in toto without opening the pericardium. A cranial stem was ligated and the cyst was cut off. During ex situ incision brown fluid was evacuated from the cyst. The patient could be transferred to the regular ward after one night at the ICU and was mobilized in a stepwise manner. On the third postoperative day we observed increasing pleural effusion on the right side and an additional chest tube was inserted. No further postoperative events occurred and the patient was discharged on the 8th postoperative day (Figure 2). 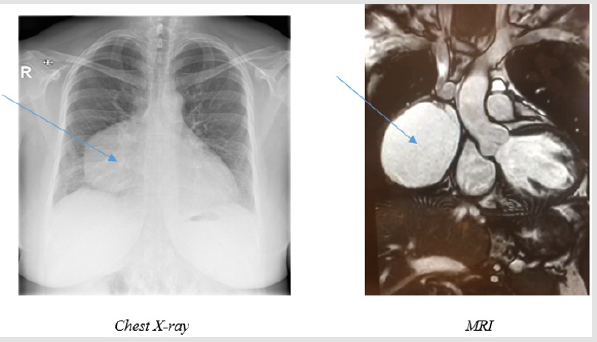 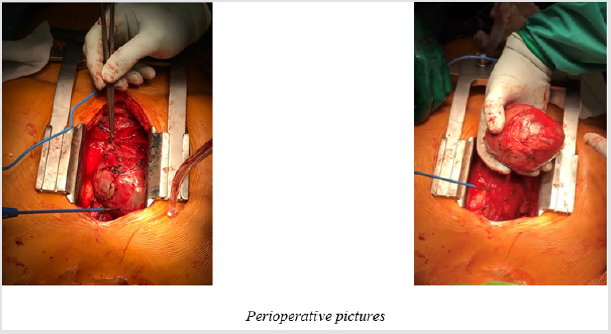 The pathology report described macroscopically a 9:7 cm cyst with a 5 cm long stem. It showed a chambered configuration, the biggest chamber measured of 7 cm. The calibre of the wall varied between 3 and 8 mm. Microscopically, the inner wall of the cyst consisted mainly of high-prismatic ciliated epithelia with some goblet cells. Furthermore, some inflammatory cells could were observed. Interestingly pancreatic tissue, with partly secretion filled excretory ducts as well as thymatic tissue was found in the cyst wall (Figure 3). The cytological examination of the cysts content showed repeating crystalline structures, with a high amount of macrophages. The following overall diagnosis was established: most likely benign mediastinal cyst with ectopic pancreatic tissue vs. a mature teratoma.

Pericardial cysts are rare entities and comprise 7% of all mediastinal masses. They are uncommon, benign congenital lesions found in over 60% in the middle mediastinum. These tumours occur in 1 per 100,000 people [1,2]. Pericardial cysts are most commonly smooth, unilocular cysts, mostly occurring congenitally. Their formation may result from failure of fusion of one of the mesenchymal lacunae that form the pericardial sac [3,5]. However, pericarditis, bacterial or parasitic infection, previous cardiac surgery or thoracic trauma, may also result in occurrence of pericardial cysts [6]. Reported cases show diameters between 2-28 cm, however mostly under 3 cm [5,7]. These cysts are usually detected in individuals in their third or fourth decade of life and there is no difference in the incidence of pericardial cysts between males and females [6,8,9]. In literature, only 20 cases of pericardial cysts in patients under 18 years have so far been described [4]. The differential diagnosis also has to include other mediastinal cysts such as bronchogenic (the most common), followed by enteric, thymic and others (including teratomas) [2,5]. Pericardial cysts are mostly found incidentally, most commonly on chest X-ray (50% - 75%) [10]. Potential complications of pericardial cysts, including compression of the heart, syncope, cardiac tamponade, bronchial compression, and sudden death are rare [11-14]. Diagnostic methods include trans-thoracic echocardiography, CT scan and Magnetic Resonance Imaging (MRI). It has to be considered, however, that like in our case, also in echocardiography a cyst might not be detected. On CT scan, the pericardial cyst is usually a thinwalled, sharply defined, oval homogeneous mass. Its attenuation is slightly higher than water density (30-40 HU). However, no studies have shown the superiority of contrast CT over MRI and echocardiography for diagnosis or follow-up [10,15] (Diagram 1).
Without histology a final diagnosis is not possible. On histologic examination, pericardial cysts are normally composed of fibrous tissue lined by mesothelium, like normal pericardium, with mild chronic inflammation [6]. Interestingly, our cyst presented thymic tissue, especially in the stem like in a thymatic cyst and also pancreatic cells. Those, rather uncommon different epithelial structures suspected a mature cystic teratoma and not a pericardial cyst. The management of pericardial cysts depends on their symptoms. The treatment options for pericardial cysts include either observation with regular echocardiographic controls for patients without symptoms or increasing cyst size. The frequency of follow up imaging has not been standardized yet [15]. Contrastenhanced CT scan has been the modality of choice for diagnosis and follow-up [16]. Percutaneous aspiration and/or drainage and surgical resection are the methods of choice for symptomatic patients or patients with large asymptomatic cysts given that they are associated with an increased risk of complications. [17] But high recurrence rates up to 30% have been reported for aspiration and percutaneous drainage [17,18].
The surgical resection can by performed by thoracotomy, sternotomy or Video-Assisted Thoracic Surgery (VATS) [7,16]. Video-Assisted Thoracoscopic Surgery (VATS) is a valuable intervention for resection of pericardial cysts with lower morbidity and mortality rates than thoracotomy [17]. Percutaneous aspiration, as mentioned, is another method, but with the high recurrence rates mentioned above [16]. A non-operative strategy may be selected for high-risk patients. Also spontaneous disappearances have been observed [19,20]. Surgery is the only definitive curative treatment has been demonstrated as up to date [2].

Pancreatic tissue in the anterior mediastinum was first described pathologically by Klob, et al. [20,21] It is mostly found in adolescents and adults, with an avarage of 29 years, females are slightly more frequently affected (58%) [20]. Generally, the occurrence of ectopic pancreatic tissue in the mediastinum is rare it is generally been more often observed in tumors of the gastrointestinal tract (70-90%), mainly in the stomach and small intestine [22,23]. When found in the thorax, it is mostly a component of gastroenteric duplication cysts, teratomas or intralobular pulmonary sequestration [22,24]. Up to date, the aetiology of this anomaly is still topic of research [23,24]. However, one theory describes an abnormal differentiation of the pluripotent epithelial cells of the ventral primary foregut resulting in ectopic pancreatic tissues in the mediastinum, based on pancreas and lower respiratory tract, sharing the same embryological origin from the primitive foregut [23,24]. Interestingly, in some cases Hypoglycaemia has been reported [21] (Tables 1 & 2) [3,5,25]. 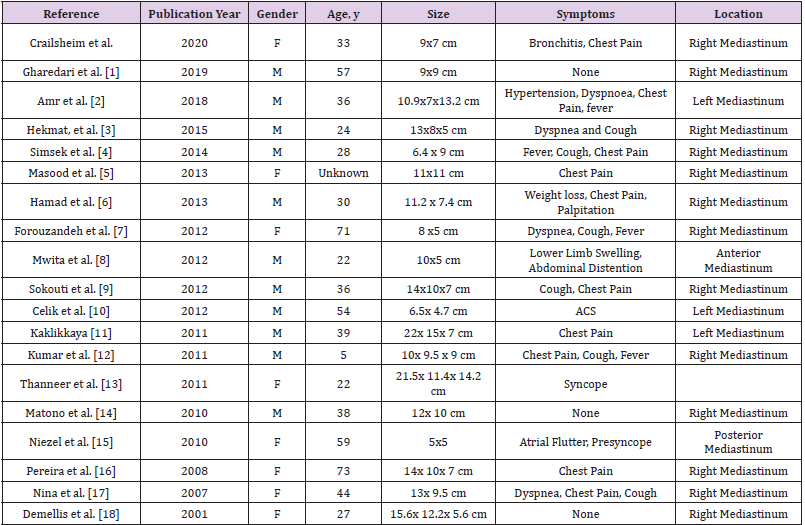 We present a 33-year-old woman suffering from recurrent bronchitis, dyspnoea and breast pain. Her past medical history was normal. In the trans-thoracic echocardiogram, no abnormality could have been detected. However, chest X-ray and MRI showed a 9x7 cm cyst in the left mediastinum. The patient was treated performing a sternotomy and the cyst could be removed without opening the pericardium. The patient was discharged on the eighth day after surgery. The pathology-report did not confirm the preoperative diagnosis of a pericardial cyst, but showed thymic and pancreatic tissue, suspicious for a mature teratoma. Giant cysts in this location are rare. A literature review will be presented in addition to the current case report.